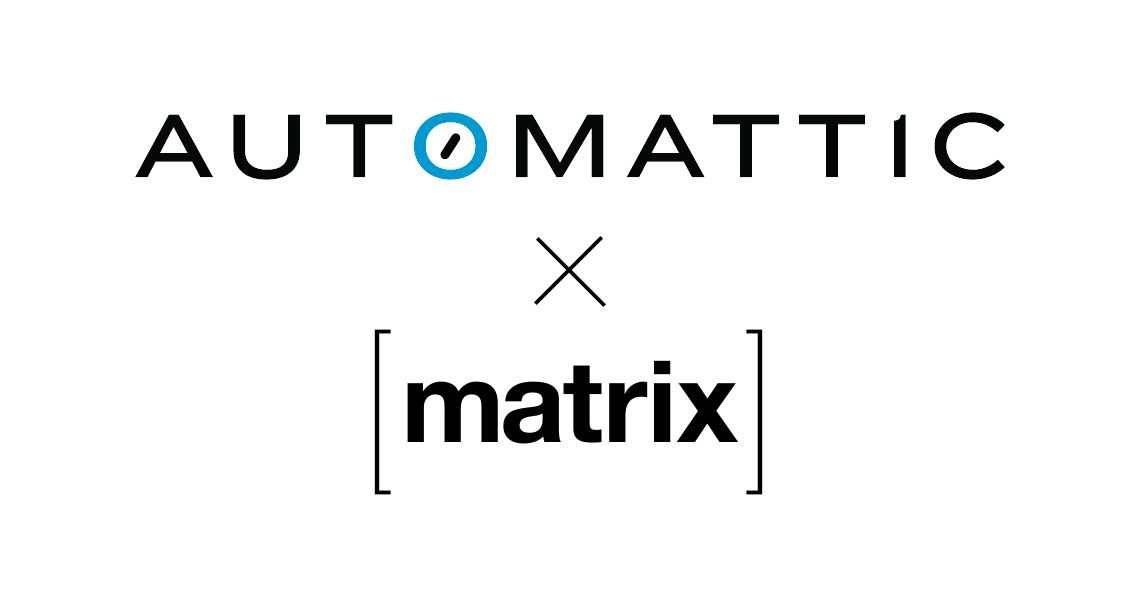 We’re very excited indeed to announce that Automattic, the creators of WordPress.com, are jumping head first into the Matrix ecosystem with a strategic investment of almost $5M into New Vector (the company which makes Riot and Modular.im, founded by the core Matrix team in 2017). More importantly, Matt Mullenweg (co-founder of WordPress and founder of Automattic) and the Automattic gang are committing to make the most of Matrix in their work going forwards!

This is huge news, not least because WordPress literally runs over 36% of the websites on today’s web - and the potential of bringing Matrix to all those users is incredible. Imagine if every WP site automatically came with its own Matrix room or community? Imagine if all content in WP automatically was published into Matrix as well as the Web? (This isn’t so far fetched an idea - turns out that Automattic already runs a XMPP bridge for wordpress.com over at im.wordpress.com!). Imagine there was an excellent Matrix client available as a WordPress plugin for embedding realtime chat into your site? Imagine if Tumblr (which is part of Automattic these days) became decentralised!?

In fact, if you’re a developer in either the Matrix or WordPress communities, now might be a good time to think about how to cross the streams.... not least because Automattic just opened up a role for a Matrix.org/WordPress Integrations Engineer! Quite aside from the investment, this shows Automattic is serious about Matrix - and we’d like to thank them for opening up jobs in these challenging times to further accelerate Matrix. Perhaps some day Matrix Engineer will be as common a career choice as Web Developer ;)

That said, it’s super early days for integration work, and there isn’t a concrete project to announce yet beyond the investment in New Vector (which is effectively an extension of the funding NV raised in October) and Automattic’s Job opening - but these are the sort of ideas we’ve been kicking around. And at the very least, we should expect to see Automattic’s communities migrating over to Matrix in the coming months.

It’s been loads of fun working with Matt and the team on this: we see a huge overlap in terms of a genuine love for the open web, open source and open standards. It’s also no coincidence that Matt (independently of Automattic) donated substantially to Matrix via Patreon back in 2017 when we needed it the most. We’re also looking forward to benefiting from Automattic’s experience in sustainably and responsibly funding and growing open source projects in general - WordPress.com is an excellent example of how one can support development of a project like WordPress without compromising its open source nature.

So, we’d like to formally welcome WordPress and the rest of the Automattic family into Matrix. It’s incredibly exciting times, and we can’t wait to see what will come of the partnership! And meanwhile, if any other massive open source organisations want to join Automattic and Mozilla in leaping into Matrix, you know where to find us… :D

Huge thanks go to Matt for believing in Matrix - watch this space for updates.