Both new MSCs this week are from @uhoreg, and look pretty great from a spec polish perspective (I've been a fan with doing away of public device names for ages). Check them out!

This MSC would allow users to actually delete account data they've set 🎉 Currently you cannot delete top-level keys from your account data, only remove their content.

Yours truly is currently writing an implementation for this in Synapse, and so far implementing the spec as written seems sound! 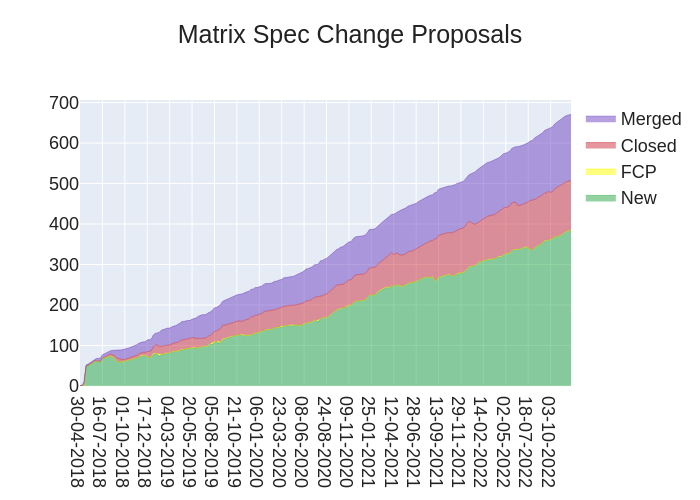 It's Friday which means it's time to talk about the newest Synapse release, v1.73.0! A few details:

Please note that this version removes legacy Prometheus metric names entirely. This also means that the enable_legacy_metrics configuration option has been removed; it will no longer be possible to re-enable the legacy metric names.

If you use metrics and have not yet updated your Grafana dashboard(s), Prometheus console(s) or alerting rule(s), please consider doing so when upgrading to this version.

In addition, a few notable features and bugfixes are:

plus much more! You can read more about this release here: https://matrix.org/blog/posts.

So... some people are distracting me by asking me to play Valheim all the time since Mistlands was in public beta (it is released now). To make that easier to synchronize, especially if not everyone can be online all the time, I wrote a small bridge: https://nheko.im/nheko-reborn/valheimmatrix

It is a very hacky experiment, but it works, so... why not show it off? Definitely check out the game, it is great!

We've also been plugging along on less visible changes during this time like bug-fixes for bridging DM's and fleshing out more of the bridge scenarios like leaving or deleting a room and bans to ensure things stay in sync. We also started bridging private conversations to Matrix behind the scenes back in February so we have a break-away point-in-time to import back from when we do the massive history import to backfill everything. Please note, that you still can't access these private rooms on Matrix but this will come later either in the form of inviting MXID's from the Gitter side or when we give access to the gitter.im homeserver itself to self-manage from that side.

Apart from playing Valheim, I at least also did some productive things! (Apart from everyone else who has been helping squashing bugs and jugendhackt of course.)

Nheko now supports MSC3664. Support for this is automatically enabled if it is enabled server side. This allows you to get notifications for events that relate to another event. For example you might want to get notifications for a reply to one of your messages. So you need to check if the replied to event was sent by you. Similar things can be done for relations like "notify me for reactions to my posts in rooms with less than 20 users".

By default only notifications for replies are enabled. You might not notice a difference, since by default you get notified for them because the fallback includes your username, but not all bridges implement that correctly and for me the reply fallback has been one of the biggest sources of bugs, so I'd like to get rid of it long term. (Also some users disable username mentions, because their name is too generic to be useful, in which case this can help as well since it actually checks the sender.)

Anyway, have fun playing around with this!

Lots of exciting news this week

And in case that wasn’t enough… now available in labs (you can enable labs features in settings on develop.element.io or on Nightly): 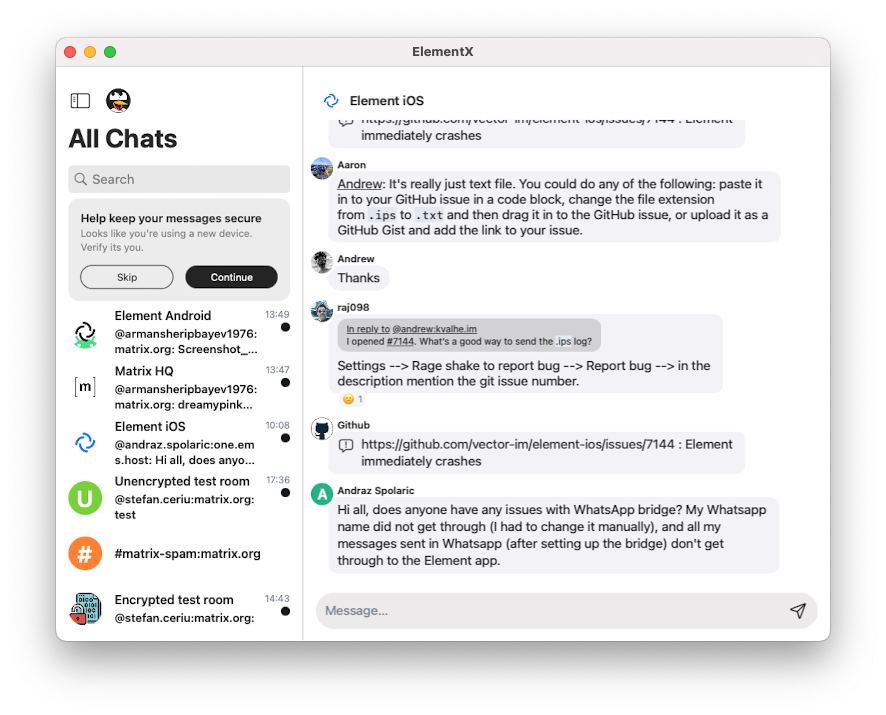 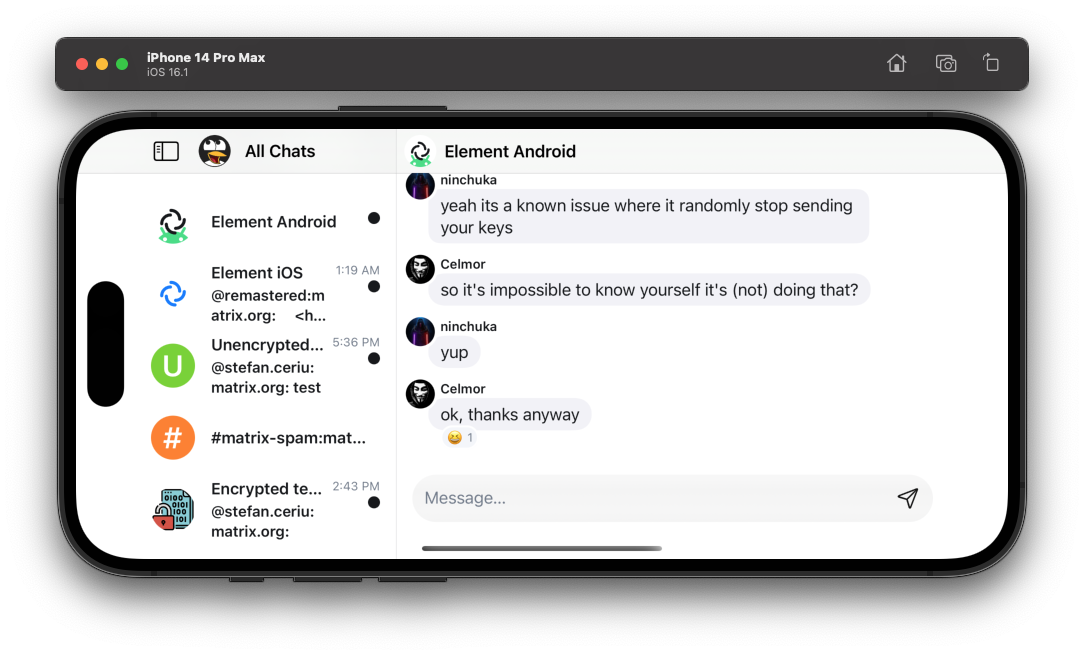 We are skipping one release cycle over the festive holidays: all apps will receive a release on 20th December (with threads coming out of Beta!) and the following RC will come out on 10th January leading up to a release on 17th January!

Earlier this week, we have release the EFFEKTIO white paper, outlining what we are working on, why we think this matters, where we intend to head with it and what perspective we come from. We’ve published this 30-pager as a Google Doc with comments activated (if you have any feedback on it) as well as with a 2-page executive summary for the busy. You can also join us in #foyer:effektio.org if you’d like to discuss it with us.

For a couple of weeks now, we have a fresh nightly build available whenever changes have been merged within the 24 hours prior. Unfortunately the Android package, with mobile being the main target the UI has been developed for, can’t be installed as is (you need to clone and build it yourself for now), the Desktop App for Linux, Windows and Mac do give you an impression what we are after. Mind you that a) other than the chat all sections are still mainly UI mocked and b) it is still in heavy development: things break sometimes.

On the app itself, we have spent a lot of time on getting the chat right. The app’s core was upgraded to matrix-sdk 0.6+ to get the latest timeline API in, which required quite some refactoring. But allowed us to implement reactions, edits and replies. Encrypted Messages are still somewhat unreliable though. Prior to the nightly builds we’ve also taken some time to clean up the UI to give it a more polished look and make clear which things are simply not enabled yet. On the non-chat side of things, we’ve mostly worked on UI things (check out the ToDo-Sections and Pins), while we were waiting for the synapse fix on reading the timeline from the beginning, which is now released in 1.73. Happy to get back to implementing the state machines soon.

You want updates more frequently and close to when they actually happen? Join our #news:effektio.org or hang out with the devs in our #tech:effektio.org matrix room.

libolm 3.2.14 has been released. This is maintenance release. The main change was improvements in the TypeScript types. There were also some improvements in the Python packaging, which should mean that the pre-built Python package for Linux is compatible with more distributions. Unfortunately, there are some issues with the i686 and aarch64 Linux builds, meaning that those packages are not currently available for the current version. However, if the previous version works for you, there is no reason to upgrade. We are investigating the issue, and may provide new packages later.

If you write code in Elm, you can now send messages in a Matrix room using a webhook.

I am building an Matrix SDK in Elm but I've never created or published a library before. This is a practice library to see what I can expect. You can install the library using

And you can send a webhook message using a function like this:

There is currently no room for this library. Just contact me @bram:noordstar.me for the library or visit #matrix-webhook:tetaneutral.net for questions about the Webhook API.

After porting the remaining fixes over from the demo branch for element-x as PRs to main, we've spent a significant time debugging the two biggest know pain points: double echos for sending messages, for which we've merged a fix, and unable to decrypt, which appears to be caused by a broken to-device message exchange (with an incomplete sender_key), which we are still investigating. Furthermore we've exposed the ability to send reactions over FFI, LoginBuilder and SsoLoginBuilder can now be used with .await and merged some smaller sled crypto store improvements.

The latter came up when investigating, whether we could use sanakirja, the pijul database backend, as a multi-process crypto store backend for mobile. This investigation is still on-going.

Further than an investigation is the uniffi async support. After completing the Python backend, Swift is also passing all tests now. Additional Docs should clarify most questions. We are as excited about this as the Mozillians seem to be. Next up: Kotlin backend.

I built a ChatGPT bot for Matrix! It does exactly what you think it does: you send a message, and ChatGPT will respond. It's very cool being able to talk to ChatGPT while on a mobile device.

It sends read receipts when messages are received by the bot, and the bot sends a typing indicator as ChatGPT is "thinking" 😀

It currently only works in unencrypted chats. I haven't managed to get encryption using matrix-bot-sdk working reliably yet. If it's meant to be working, tips or PRs are very welcome! I've really enjoyed tinkering withmatrix-bot-sdk on a few projects so far.

Keep in mind any text you send it will go to the closed source servers of OpenAI, and it is unlikely to stay free forever. 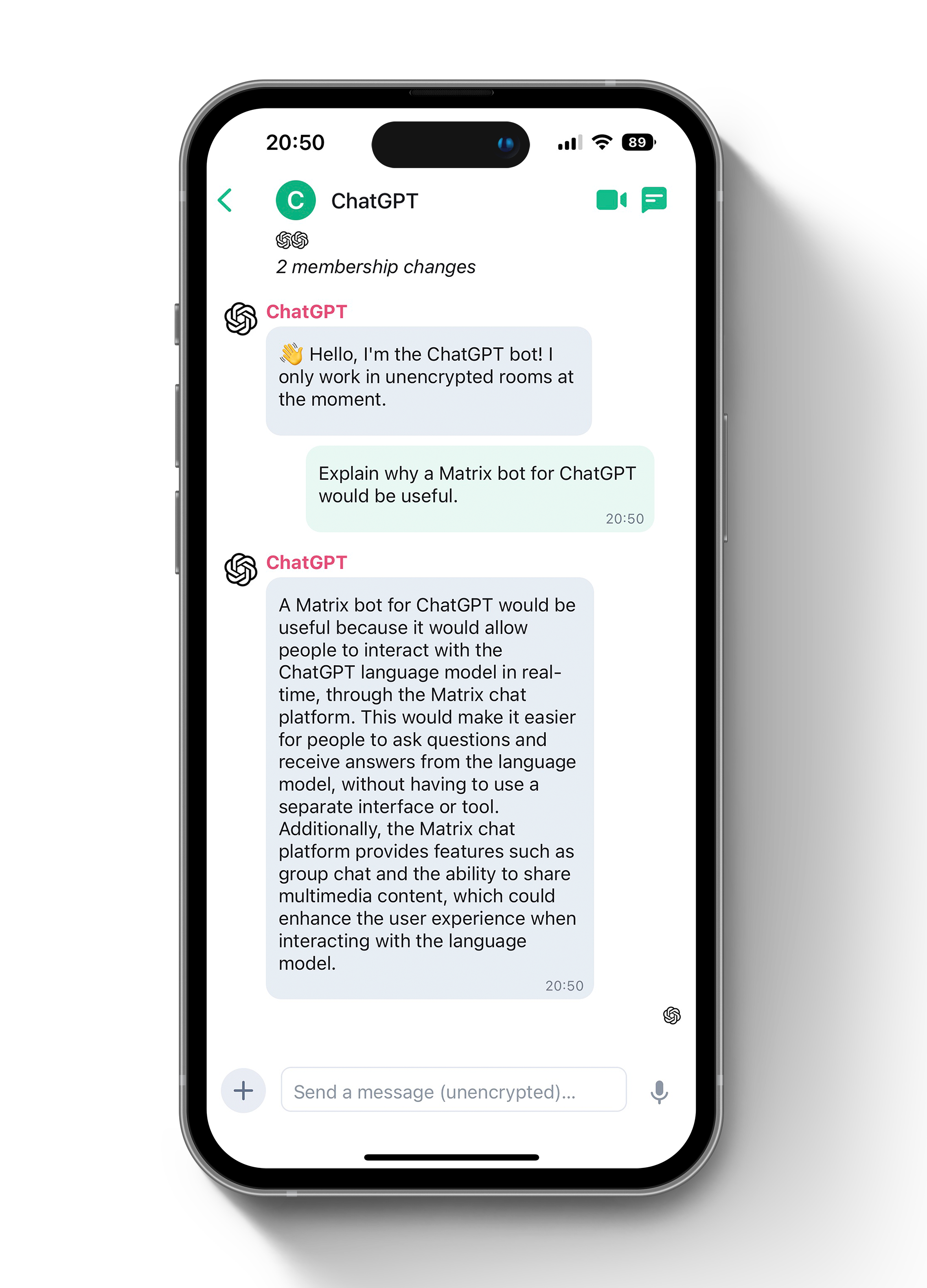 The Matrix.org Foundation has a stand at FOSDEM! Come in Brussels on February 4 and 5 to meet us in person, see the fun stuff we're doing, show us the nice things you are doing and grab cool merch.

We have also received proposals for a little more than a full day of devroom! We only have half a day of in-person devroom. We will (try to?) broadcast the in-person devroom in the Matrix room of course, and then the conference bot will schedule the talks we couldn't fit in the in-person slots.

Matrix Community Summit Berlin 2022 Podcast (German) Another week, another episode, another community member interviewed. Meet Robert, who spoke with Christian, about creating a CMS system on top of matrix.

episode link: https://spotifyanchor-web.app.link/e/p8aiO8ABCvb rss feed: https://anchor.fm/s/cdb34188/podcast/rss I hope you enjoy this week's interview and learn what other people in the community are up to.