Matrix Live will be back in the new year.

Some of the spec core team have been on holidays this week, but we still finished FCP on one MSC, and merged another to the spec. As mentioned in last week's update, progress will be slower over the holiday season, but we'll be back in the new year, working to make Matrix better.

The random MSC of the week is... MSC2783: Homeserver Migration Data Format! If you're running a homeserver using one implementation, it's currently impossible to switch to a different implementation without losing data. This MSC proposes a file format for exporting data from one implementation and importing it into another. 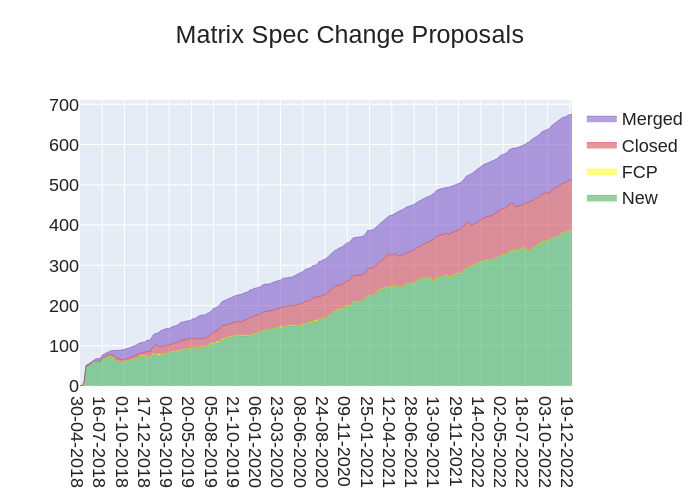 If all you wanted for Christmas is a new Conduit release, then I have great news for you:

Conduit v0.5.0 just released and it contains almost everything you wanted:

Conduit is getting a lot more usable with this release, the main missing feature is backfill over federation (loading room messages from before your server joined a room). To update conduit, simply stop it, replace the binary and start it again. Also feel free to join #conduit:fachschaften.org and ask questions there

This week we sped up search in rooms with a lot of history. We now also don't block the UI during the search of local messages anymore.

It's that time of year again, and we have a special gift for all of you just in time for the holidays: Neochat now supports end-to-end encryption! This is made possible thanks to the release of libQuotient 0.7.

While this feature is still somewhat experimental, it's a big step forward in ensuring the privacy and security of your conversations. Just keep in mind that if your only logged-in client is Neochat and something goes wrong, you might lose your messages.

If you're feeling adventurous and want to try out the new end-to-end encryption feature, you can already get it from Flathub and some distros. We're also working on supporting it in our Windows, Android, and macOS builds, so stay tuned for updates.

And in the spirit of the season, here's a Christmas joke: Why was the JavaScript developer's house cold? Because he left his closure open!

Merry Christmas and happy chatting, everyone!

Happy Holidays from us at Element! This is our last update for 2022, and it’s a good ‘un.

A Qt5 library to write cross-platform clients for Matrix

It took us (yes, us - there's more than one person actively working on the project!) a very long time but libQuotient 0.7.0 is out, with a huge wall of release notes. Big, big, BIG thanks to Carl Schwan and Tobias Fella for their contributions and early adoption of this release in NeoChat (NeoChat maintained compatibility with libQuotient's development branch, along with the stable branch, for quite some time by now). A short summary of most significant things:

Merry Christmas and Happy New Year to those who observe those - and hopefully I'll get to my senses and release 0.8 sooner than in another year 🙂

As part of the efforts for working on detecting spam using ML I started to write a moderation bot.

This bot is written from scratch with some design decisions that hopefully will improve usability for both newcomers and seasoned admins.

The warnings also contain a "false positive" action. This is meant to be used to feed back into the used model for further training and improving it.

All in all, I hope to simplify the process of moderation based on what I experienced as an admin. Feel free to chime in at #matrix-spam-ml:midnightthoughts.space to suggest ideas for the bot. At the time of writing, it is still very much a prototype/demo.

The code can be found at https://github.com/MTRNord/matrix-spam-ml/tree/main/bot

Documentation can be found at: https://mtrnord.github.io/matrix-spam-ml/bot

Dept of Ping will be back next week.

There will be no TWIM next week, but we'll be back in the new year. Be sure to stop by #twim:matrix.org with your updates!