This week Neil and Matthew are talking about recent security issues - this is a really long and detailed chat, but you can skip to around the 32 minute mark to hear about other news - including progress on reactions. Reminder that for a good "big picture" overview of the progress of Matrix, you can look at the Homeserver High Level Roadmap.

Reactions continues at full speed, we have a draft PR and will be implementing over the coming week. The ability to blacklist IPs over federation will land imminently, as well as a nasty device management bug that led to a spate of E2E errors. Next week is all about Reactions, resuming work on the small homeserver project and finally getting back to Synapse 1.0 blockers following all the remediation drama of the past few weeks. With any luck we’ll have a new Synapse release for you next week.

A new version of Pattle is available on F-droid!

Lots of changes again, including:

To install Pattle, add the following repo in F-droid: 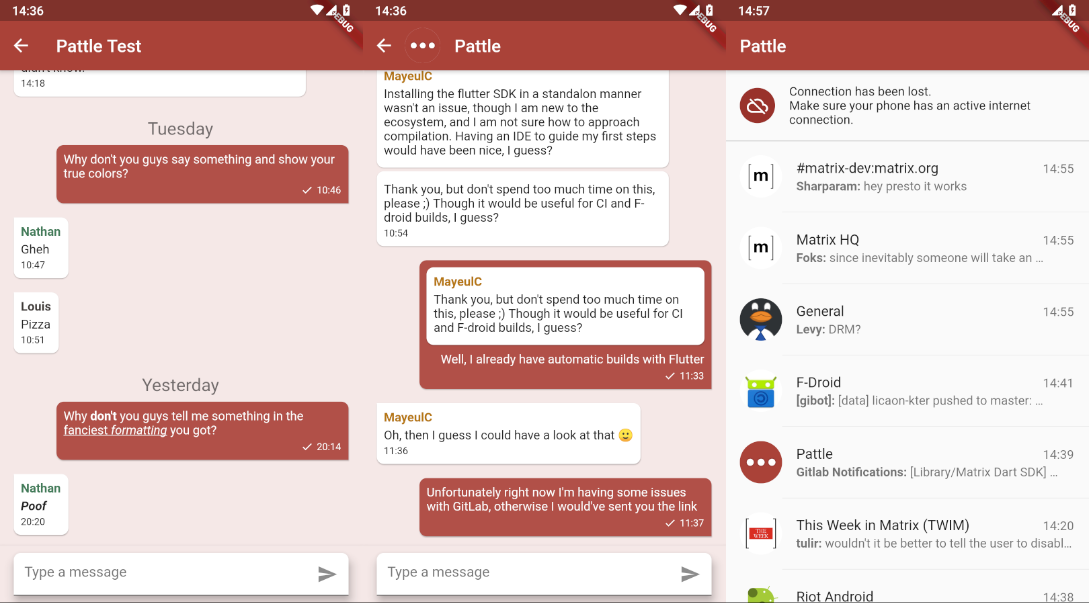 Although the development pace has been reduced lately, the Fractal team managed to make significant progress towards the 4.2 release. More specifically since our previous news, Chris has landed much of his adaptive view work to get Fractal in a mobile friendly state so it’s ready to run on the Librem 5 once Purism starts shipping them. But he didn’t stop there: eager to see his awesome work in the hands of many people (figuratively, the literal application will have to wait for the phone to be out 😛) as soon as possible, he tackled a few bugs that we really wanted to get sorted out before we got a new version out.

Alexandre also prepared the changelog with a bird’s-eye view of all changes that happened since 4.0.

Last but not least, we had a few external contributions for features such as network proxy support and typing notifications.

this week in continuum

FluffyChat available as a Snap package, plus E2EE progress

FluffyChat is now also available as a Snap package for desktop Linux
https://snapcraft.io/fluffychat :D
It's a Matrix client written in Qml for Ubuntu Phones. Now it is working for Linux Desktop too.

Progress has been made at the end2end encryption for FluffyChat. Qml bindings for the libolm library are mostly ready and the app can now create keys and upload keys to the server. Device tracking is now implemented too.

tulir has been using his mautrix-python lib, which was recently used to enable his mautrix-facebook bridge, to bring a new method for Matrix-Hangouts bridging:

New bridge again, this time it's Hangouts: https://github.com/tulir/mautrix-hangouts / #hangouts:maunium.net. As with the Messenger bridge, currently the main difference to matrix-puppet-hangouts is multi-user support (also no hacky JS/Python mixing).

Before making mautrix-hangouts, I put a bunch of the generic bridging parts of mautrix-facebook into mautrix-python's bridge module and used that in both bridges. After Debian 10 is released, I'll drop Python 3.5 compatibility in mautrix-telegram and move it to use mautrix-python and the bridge module too.

Next week I'm planning on adding a bunch of features to both my new bridges, such as bridging formatting and remaining media types (so no new bridges planned for now :D).

Dept of SDKs and Frameworks

The vote on a new name for the QMatrixClient project has been going on over the past week.
We have a winner now, and the new name is "Quotient"! In the nearest weeks, expect changes in the library code (it's going to be libQuotient from the next release), room aliases (already ongoing), links to the repos etc. etc. Where possible, we're going to smoothen the migration path by providing legacy fallbacks (e.g., the new C++ namespace, Quotient, will be introduced but the old one, QMatrixClient, will stay its synonym, although deprecated).
Just in case you missed all the previous mentions of the topic - it's only related to the overall project and the library, but not the client - its name remains Quaternion.

Because the previous name has been a bit clumsy and, most importantly, the project is no more focusing just on client-side but on a wider set of applications of Matrix (no homeserver in plans though). See also the recent backlog of #qmatrixclient:matrix.org (now also #quotient:matrix.org) earlier this week for the whole discussion

Just published version 0.1.0 of the Ruby Matrix SDK, and I've gotten enough testing written now where I feel comfortable not marking this as a pre-production release. So feel free to integrate it into more than just prototypes and experiments. 😃
Relevant links; GitHub page, #ruby-matrix-sdk:kittenface.studio.

Opsdroid 0.15 has been released, with a lot of matrix focused updates. The biggest of which is support for sending and receiving images and files. There have also been a bunch of bug fixes such as clean exit of the matrix connector and correct handling of events which are not parsed. There are also a bunch of other not matrix specific changes like support for the awesome parse library for string matching. Read all about it in the release blog: https://medium.com/opsdroid/event-dispatching-simple-parsing-and-more-in-v0-15-3f721b8a6d6c

This week I've been adding PK interfaces to cjhdev's Ruby bindings for Olm, in preparation of improving my Tchap proxy. The PK interfaces can be found in my fork of ruby_olm. Building the native extensions for the gem has had a major overhaul, so no pull request yet.

It's been a few weeks since we heard from Slavi about matrix-docker-ansible-deploy, but he's been working away on it:

We haven't shared any matrix-docker-ansible-deploy updates lately, but we've had lots of community contributions.

Most of it has been bug fixes and various internal improvements, but we've also landed a few large features. Here's what's most interesting lately:

Dept of Status of Matrix

jaywink, maintainer of https://the-federation.info, told us what we all know to be true: Matrix is great and is getting more popular:

Matrix (Synapse) jumps to second place in https://the-federation.info site, which lists servers of the federated social web. Help us map the true size of the Matrixverse by adding your server by going a https://the-federation.info/register/yourdomain.tld. Note, SRV and well-known lookups not yet working, so registration needs to happen with the Matrix server real domain (and port if any).

PS to people who would normally be reading this in their own RSS reader - I apologise, we'll get the full-article feed back up soon.