Since you've been chatting on Matrix this week, you'll have noticed some new features rolling out.

In Riot develop, hit Labs in the Settings menu and you'll be able to try out the new Reactions and message editing features.

This week we shipped 0.99.4 - no stand out ‘oh my gosh’ headlines, just lot lot of bug fixes and perf improvements - get involved. We’ve also been working hard to getting things like reactions and edits going, as well more prep for improving perf for small server instances.

Construct has added a server command line available in any room when starting a line with a special character (by default it's '\'). The commands are private so the room doesn't actually see it. More on this next week, or check out #test:zemos.net. 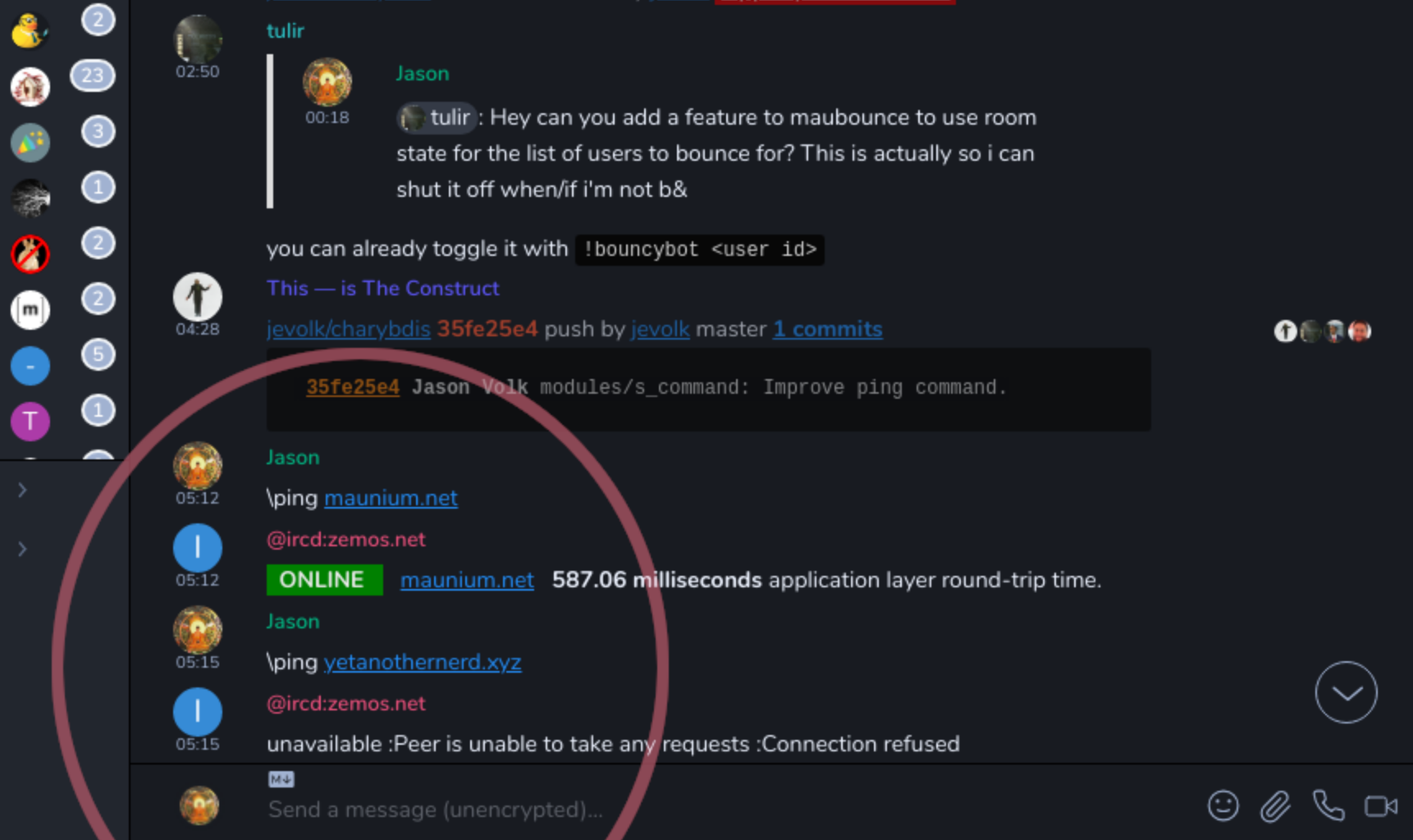 Dept of SDKs and Frameworks

Big news from Ananace this week:

Finished getting the test coverage to a reasonable enough percentage to feel comfortable releasing the Ruby Matrix SDK as a nice and stable 1.0 (.0)

This is great! All Rubyists should check it out. Ananace notes:

I still need to set up fixtures for all the API endpoints I'm exposing so I can verify every single API call as well, but I see that as a later thing as that relates mostly to how the other side (the HS) handles my input, not to how the SDK itself handles said input

A new version of Pattle is available on F-droid!

To install this release, add the following repo in F-droid: did alot of changes on tangent to make it more stable and performant, only registration and guest login are left to do, git changed to https://gitlab.com/sanlox/tangent

Test the latest at: https://sanlox.dev/tangent/ 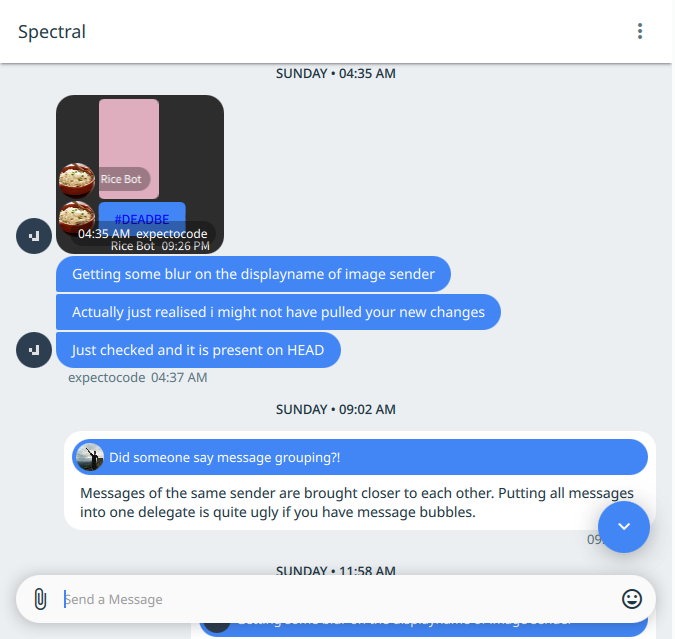 Ana, first time contributor, added a bunch of cool keyboard shortcuts to ease navigation in Fractal. One can now e.g. go down to the next room with unread messages with ctrl+shift+page down. 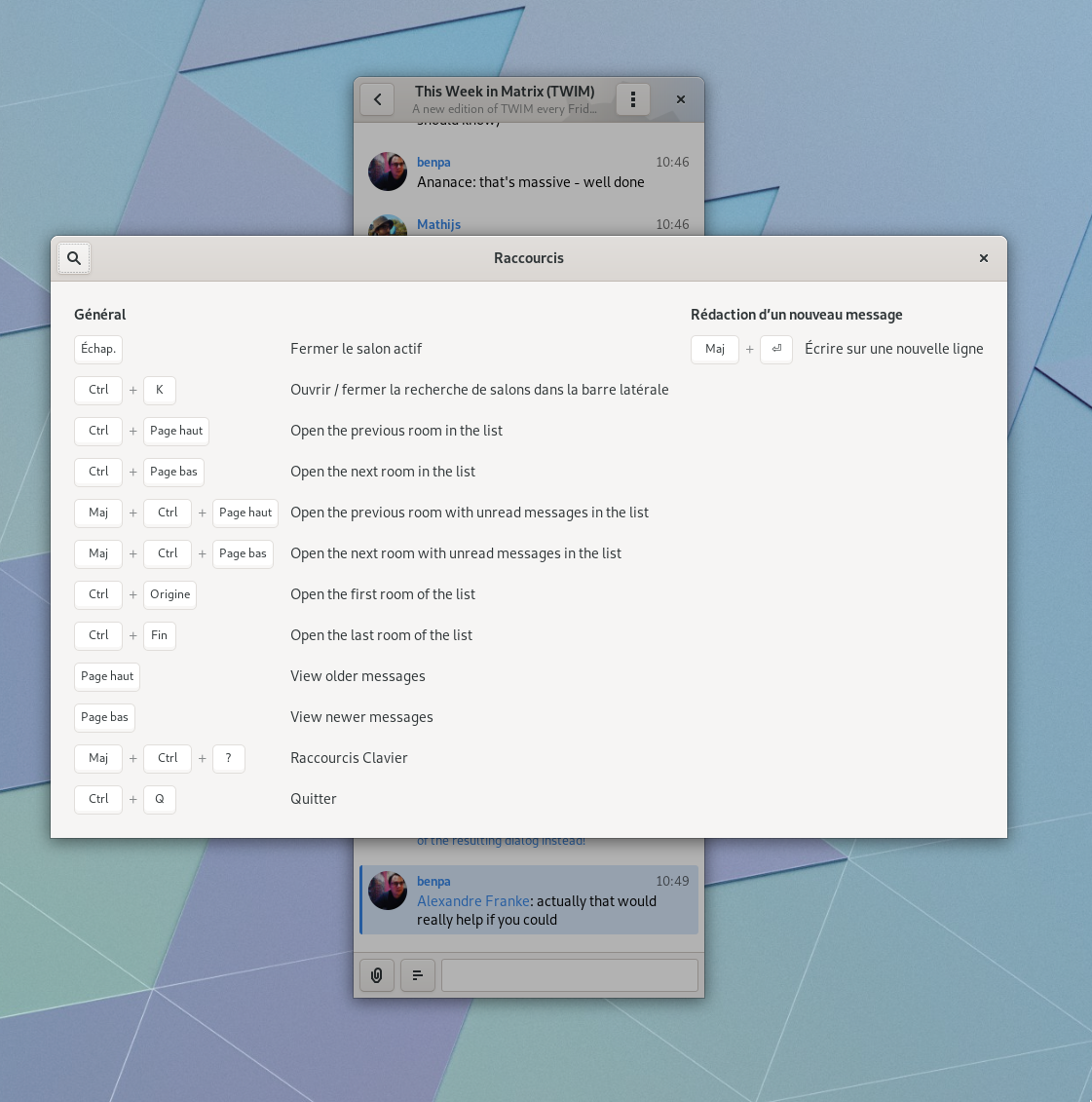 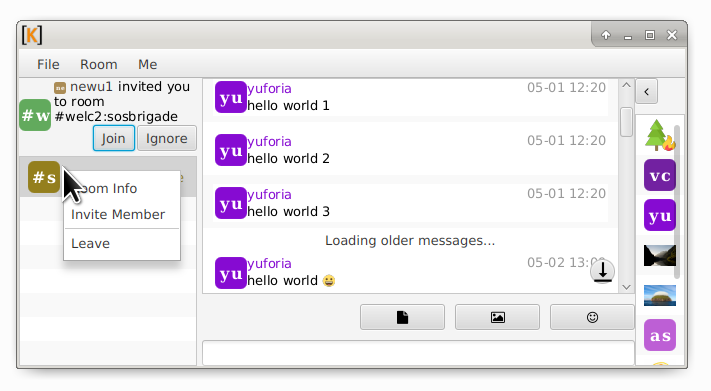 This week was too packed IRL but I took an hour to experiment with reactions that are a rage in riot.im/develop these days. An experimental "kitsune-reactions" branch understands reaction events and allows clients to further process them. A proof-of-concept in Quaternion will land over the weekend.

Update on Scylla from VaNilLa: Though I am very busy with schoolwork, I found time to fix a long-standing issue: the names of private messages showing up as <No Name>. this is gone now, and rooms are sorted alphabetically to make it easier to navigate.
Try Scylla here: https://scylla.danilafe.com
Come join us in #scylla:riot.danilafe.com to discuss

Evening, we've just cut the first RC of matrix-appservice-discord 0.5.0. Most of the changes this time around are bugfixes to formatting, internal re-architecturing / performance boosts and shifting more things to the database. Please help test if you run an instance, so we can get a 0.5.0 out swiftly. The next release has a lot of features planned for it 😉

Also - congratulations to Half-Shot on finishing all his final-year exams! How will you fill your time now?

Think tulir's been busy this week?

Lots of small changes in my projects:

for everything about Matrix on Debian, join #debian-matrix:matrix.org

the silvio/avhost synapse docker container is making progress in moving to python 3, the container is made smaller and no longer runs synapse as root

There are some important differences between this and https://github.com/matrix-org/synapse/tree/master/contrib/docker:

it puts all the configuration files, logfiles and media files in the volume, you don't really configure it with environmental variables but just by editing the homeserver.yaml file in the volume, and it also contains coturn

Hot on the heels of the rapid developments of the reaction work, I've written a bot that automatically reacts when spotting certain phrases inside rooms. Honestly I have no idea what the use case is for this, but it exists and I currently use it to stick the :dog: reaction on every dog related event. https://github.com/Half-Shot/matrix-reactbot

The bot is also now used in #twim:matrix.org, whhere it performs the needed work of adding red circles to submissions.

Dept of Status of Matrix

t2bot.io has launched a new website, surpassed a milestone of 300k total bridged users (70k of those are active monthly), and launched 2 new early-beta-quality bridges. If you're looking to try out tulir's latest Hangouts or Facebook Messenger bridge then t2bot.io is an option for that, assuming you don't mind the occasional bug, missing feature, or problem. Check out https://t2bot.io/hangouts/ and https://t2bot.io/messenger/ for setup instructions.

PS Massive thanks to Aaron Raimist for doing the needful to make full articles appear in RSS!