Alongside Synapse’s 1.0 release, the Matrix Specification is also getting a 1.0 on June 10th. In practice this means a fresh release of the Client-Server, Server-Server, Application Service, and Identity Service specifications. The Push Specification is just so simple it hasn’t needed an update yet.

Work has been happening to get all the specs in shape for 1.0 - follow along at https://github.com/matrix-org/matrix-doc/projects/2?fullscreen=true

Main news in synapse-land this week is that we released Synapse v0.99.5.2, which fixes a big performance regression which was introduced v0.99.5. Folks who are currently on v0.99.5/v0.99.5.1 are advised to upgrade asap.

Otherwise, work has been continuing apace towards a v1.0 release on 10th June.

Construct is a homeserver implementation in C++:

Just wanted to pop in and mention that 0.6.4 is out this week. It comes with a decent number of bug fixes.

el0 pointed out that nheko is available on flathub: https://flathub.org/apps/details/io.github.NhekoReborn.Nheko

continuum modified the JSON parser to save a copy of the source. Now fields that are not standard or not yet supported are displayed when you right-click to view the source. For example, "age" and "transaction_id" are not used by the app, but are available when viewing the raw JSON 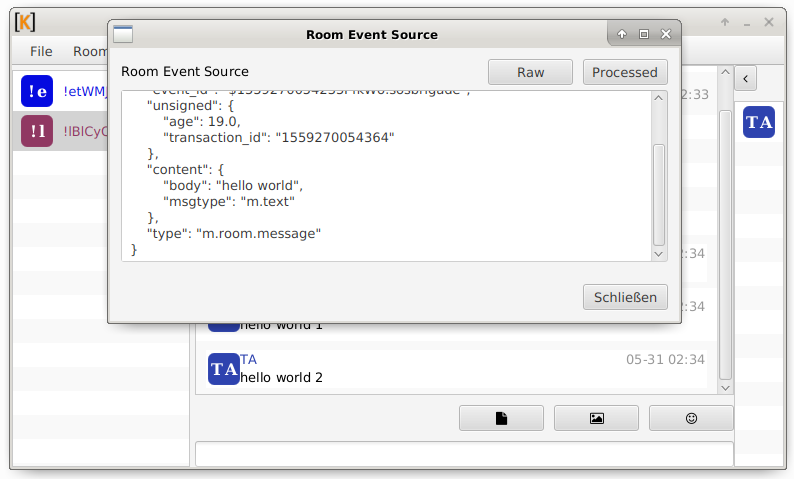 f0x has been working on Neo:

The Neo room has moved to #neo:pixie.town, and the site+deployment are being moved to https://neo.pixie.town

We also joined the new call at https://stopthemingmy.app

Can you believe it, tulir had a busy week working on his various bridges:

mautrix-facebook and mautrix-hangouts got some bugfixes and options to configure the displaynames of the ghost users on Matrix (like adding (FB) or (Hangouts) suffixes).

mautrix-whatsapp's Matrix puppeting was finished (meaning typing notifs, read receipts and presence updates can now be bridged to WhatsApp) and unexpected disconnection handling was fixed (automatic reconnections should now usually work again). Backfilling needed some hacks to work with Matrix puppeting. The problem is that the real Matrix users have rate limits and can't send timestamp-massaged messages. I decided to just invite the default ghost user to the room while backfilling and make it leave afterwards so that private chat room names and such would stay intact. Some clients like Riot Android/iOS sometimes do weird things, such as moving the room out of "People", but that shouldn't be too bad.

matrix-docker-ansible-deploy has seen some work in becoming more flexible.

Synapse is not a requirement anymore. People can now use the playbook to install any of the other services, wiring them to a Synapse instance installed in another way. This is mostly useful for installing bridges or other auxiliary services without going "all in" on the playbook. Not having Synapse as a fixed requirement also opens the door for installing alternative homeservers, when such become available in the future.

On a similar note, to ease maintanability, all bridges have been moved to separate Ansible roles (outside of the matrix-synapse role). There have been lots of improvements related to bridge configuration with even more likely to come soon.

Aaron (formerly known as Aaron Raimist) has been a major help to the Matrix project, and has recently launched something new:

I have started another Matrix documentation project, Matrix User Documentation. I know, there are several however none of them aim to actually be a handbook for using Riot or any other clients. I would like for this to become a place where you can find "The (unofficial) Riot Handbook" or "The (unofficial) Quaternion Handbook" as well as a place where you can find answers to more of your FAQs.

It's still very early, only a few answers are written so far and none of the handbooks have been started but I would welcome any community assistance. You can view what I have so far at: http://mud.raim.ist/en/latest/

We welcomed Atreatis to Matrix recently. They are creating a new directory service:

Someone mentioned earlier that there is a need for a list of public servers on Github so people can find and add their public matrix servers. Which combines well with what I am building at the moment. Hopefully you guys don't mind helping me out on creating the list and spreading the word. The repository can be found here: https://github.com/Atreatis/matrix-servers

Matrix Shell Suite is a promising looking project which could deserve more attention.

Thank You to PyConWeb and especially to Hardy for letting richvdh and myself host TWO Matrix sessions at your event last weekend - was a great time and I hope everyone enjoyed the presentations and workshops.