Introducing Matrix 1.0 and the Matrix.org Foundation

We are very excited to announce the first fully stable release of the Matrix protocol and specification across all APIs - as well as the Synapse 1.0 reference implementation which implements the full Matrix 1.0 API surface.

This means that after just over 5 years since the initial work on Matrix began, we are proud to have finally exited beta!! This is the conclusion of the work which we announced at FOSDEM 2019 when we cut the first stable release of the Server-Server API and began the Synapse 0.99 release series in anticipation of releasing a 1.0.

Now, before you get too excited, it’s critical to understand that Matrix 1.0 is all about providing a stable, self-consistent, self-contained and secure version of the standard which anyone should be able to use to independently implement production-grade Matrix clients, servers, bots and bridges etc. It does not mean that all planned or possible features in Matrix are now specified and implemented, but that the most important core of the protocol is a well-defined stable platform for everyone to build on.

On the Synapse side, our focus has been exclusively on ensuring that Synapse correctly implements Matrix 1.0, to provide a stable and secure basis for participating in Matrix without risk of room corruption or other nastinesses. However, we have deliberately not focused on performance or features in the 1.0 release - so I’m afraid that synapse’s RAM footprint will not have got significantly better, and your favourite long-awaited features (automatically defragmenting rooms with lots of forward extremities, configurable message retention, admin management web-interface etc) have not yet landed. In other words, this is the opposite of the Riot 1.0 release (where the entire app was redesigned and radically improved its performance and UX) - instead, we have adopted the mantra to make it work, make it work right, and then (finally) make it fast. You can read the full release notes here. It’s also worth looking at the full changelog through the Synapse 0.99 release series to see the massive amount of polishing that’s been going on here.

All this means that the main headline features which land in Matrix 1.0 are vitally important but relatively dry:

That said, there is a lot of really exciting stuff in flight right now which sadly didn’t stabilise in time for Matrix 1.0, but will be landing as fast as we can finalise it now that 1.0 is at last out the door. This includes:

Then stuff which we haven’t yet started, but is now unlocked by the 1.0 release:

Just to give a quick taster of the shape of things to come, here’s RiotX/Android, the all-new Riot client for Android, showing off Edits & Reactions in the wild…

...and here’s a screenshot of the final test jig for cross-signing devices in end-to-end encryption, so you will never have to manually verify new devices for a trusted user ever again! We demoed a *very* early version of this at FOSDEM, but this here is the testing harness for real deal, after several iterations of the spec and implementation to nail down the model. + means the device/user's cross-signing key is trusted, T means it's TOFU: 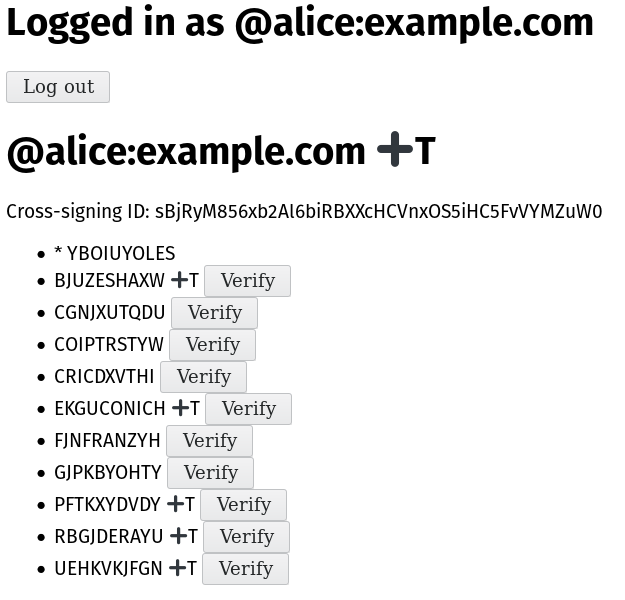 So, there you have it - welcome to Matrix 1.0, and we look forward to our backlog of feature work now landing!

Massive massive thanks to everyone who has stuck with the project over the years and helped support and grow Matrix - little did we think back in May 2014 that it’d take us this long to exit beta, but hopefully you’ll agree that it’s been worth it :)

Talking of which, we were looking through the photos we took from the first ever session hacking on Matrix back in May 2014… ...suffice it to say that of the architectural options, we went with #3 in the end... 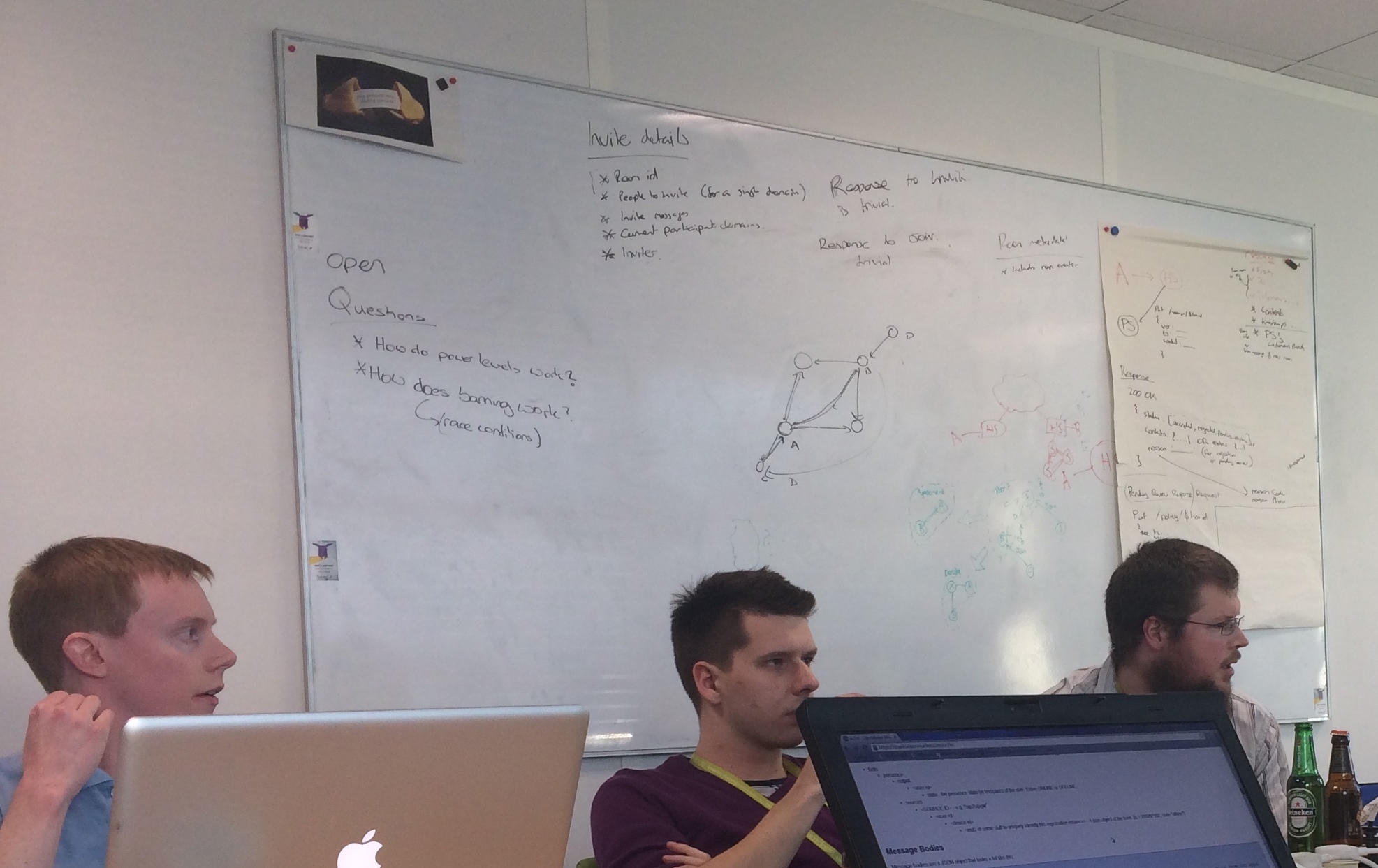 ...and that nowadays we actually know how power levels work, in excruciating and (hopefully) well-specified detail :)

There has been an absolutely enormous amount of work to pull Matrix 1.0 together - both on the spec side (thanks to the Spec Core Team for corralling proposals, and everyone who's contributed proposals, and particularly to Travis for editing it all) and the implementation side (thanks to the whole Synapse team for the tedious task of cleaning up everything that was needed for 1.0). And of course, huge thanks go to everyone who has been helping test and debug the Synapse 1.0 release candidates, or just supporting the project to get to this point :)

Finally, as promised, alongside Matrix 1.0, we are very happy to announce the official launch of the finalised Matrix.org Foundation!

This has been a long-running project to ensure that Matrix’s future is governed by a neutral non-profit custodian for the benefit of everyone in the Matrix ecosystem. We started the process nearly a year ago back with the initial proposal Towards Open Governance of Matrix.org, and then legally incorporated the Foundation in October, and published the final governance proposal in January.

Most importantly, we’re excited to introduce the Guardians of the Matrix.org Foundation. The Guardians are the legal directors of the non-profit Foundation, and are responsible for ensuring that the Foundation (and by extension the Spec Core Team) keeps on mission and neutrally protects the development of Matrix. Guardians are typically independent of the commercial Matrix ecosystem and may even not be members of today’s Matrix community, but are deeply aligned with the mission of the project. Guardians are selected to be respected and trusted by the wider community to uphold the guiding principles of the Foundation and keep the other Guardians honest.

We have started the Foundation with five Guardians - two being the original founders of the Matrix project (Matthew and Amandine) and three being entirely independent, thus ensuring the original Matrix team forms a minority which can be kept in check by the rest of the Guardians. The new Guardians are:

We’d like to offer a very warm welcome to the new Guardians, and thank them profusely for giving up their time to join the Foundation and help ensure Matrix stays on course for the years to come.

For the full update on the Foundation, please check out the new website content at https://matrix.org/foundation which should tell you everything you could possibly want to know about the Foundation, the Guardians, the Foundation’s legal Articles of Association, and the day-to-day Rules which define the Open Governance process.

Matrix 1.0 has been a bit of an epic to release, but puts us on a much stronger footing for the future.

However, it’s very unlikely that we’d have made it this far if most of the core dev team wasn’t able to work on Matrix as their day job. Right now we are actively looking for large-scale donations to the Matrix.org Foundation (and/or investment in New Vector) to ensure that the team can maintain as tight a focus on core Matrix work as possible, and to ensure the project realises its full potential. While Matrix is growing faster than ever, this perversely means we have more and more distractions - whether that’s keeping the Matrix.org server safe and operational, or handling support requests from the community, or helping new members of the ecosystem get up and running. If you would like Matrix to succeed, please get in touch if you’d like to sponsor work, prioritise features, get support contracts, or otherwise support the project. We’re particularly interested in sponsorship around decentralised reputation work (e.g. publishing a global room directory which users can filter based on their preferences).

Finally, huge thanks to everyone who has continued to support us through thick and thin on Patreon, Liberapay or other platforms. Every little helps here, both in terms of practically keeping the lights on, and also inspiring larger donations & financial support.

So: thank you once again for flying Matrix. We hope you enjoy 1.0, and we look forward to everything else landing on the horizon!

Matrix 1.0
The Matrix.org Foundation
And finally…