We have a whole lot of Dendrite news this week! First, from anoa, on the Matrix team:

Progress has been picking up this week with some of Cnly’s many PRs finally getting merged! Cnly is our resident Google Summer of Code student this Summer and has been making strides ever since. We also finally fully migrated to BuildKite for Continuous Integration (which is much quicker than TravisCI) and have implemented golangci-lint as the project’s opinionated linter (catching some bugs in the process).

As part of CI, we’ve set up Sytest for Dendrite, which grants us a loose method of keeping track of progress as we go along. Currently the only way to do so is to take a look at the testfile which holds all the tests we know Dendrite to be passing, and cross-referencing that with the list of all sytests (which isn’t actually available anywhere). We’re hoping to make some nice way of visualizing progress over time with this data (and possibly break it down into Federation/Client/Application Service categories), but this will take some time.

We’d also like to thank some new contributors that have shown up since Matrix 1.0’s release. serra-allgood contributed a fix for querying aliases when using at least one application service, while DrGlitchMX sent a PR in for some database fixes. SUMUKHA-PK’s PR to add room tags is still around and should see some love very shortly.

As far as the current goals of the project, we’re looking to primarily make Dendrite federate with Synapse, which will allow it to actually be usable for testing/basic day-to-day usage. We intend to have it done so in the next few months, so stay tuned!

Next, from Cnly, who is doing GSOC🎓 on Dendrite:

For Dendrite, the first phase of GSoC has primarily seen improvements for the existing code including bug fixes, refinements for testing, and some refactoring that prepares Dendrite for later feature implementation. Among the changes, two important ones will be the initial support for EDUs in /sync responses as well as a federation destination cache that allows for more effective federation.

In the next phase, more focus will be put into feature completion, mainly for the Client/Server API component. Since this part of work covers various still-under-construction areas in Dendrite, it is foreseeable that more progress will actually be made than proposed.

Work is underway to bring Ruma up to date with version r0.5.0 of the Matrix specification. Starting with the most foundational libraries and working up towards the higher-level ruma-client, this work should be done in the next week or two. The bulk of the work since the last update has been on ruma-events, adding all of the events that were previously missing, and doing a full pass through existing events to make sure our definitions match the specification.

I can't wait to see more updates out of Ruma!

This announcement is nearly a week old from Half-Shot, coming in right after the previous TWIM was published:

We've released v0.5.1 of the discord bridge today. It's mostly comprised of small bugfixes and features, but contains metrics support for tracking performance on the bridge. https://github.com/Half-Shot/matrix-appservice-discord/releases/tag/0.5.1

mautrix-telegram got some bugs fixed and minor features:

Kai is working on bridging in Matrix, mentored by Half-Shot:

The first phase of GSoC is nearing its end and progress has been made on the Reliable Bridges project.
The main focus of the work was on delivering a running implementation for the signaling of permanent errors. Work has been done on matrix-appservice-bridge together with matrix-appservice-discord. An internal version of the Discord bridge with the new feature is already running and the related PR for the bridge SDK is in the state of being completed.
The next phase of GSOC comes with new goals. First, the preparation of a MSC for the signaling of bridge errors, so that the feature can be discussed in the community and can become a part of The Spec. The second goal will be the modification of Riot Web, so that the user is notified when an error condition occurred.
There also has been a slight change of plan: The work on notifying clients when parts of the system are temporarily unavailable needs reconsideration as not even the core Matrix network itself has this capability. The way forward here should probably be a unified solution.

Soru, who you probably know from her work on matrix-appservice-discord, has started a new library:

Soru started working on a new puppeting library, for a lack of a better name it is currently called mx-puppet-bridge.
Unlike the existing puppet bridge, the focus of this one is to handle multiple users at once, all dynamically without needing to edit the configuration file over and over. Additionally the new codebase results in quite a few things smoothened out for easier protocol implementations.
Furthermore mx-puppet-bridge is written in typescript and based on travis' matrix-bot-sdk.
As protocol implementation for testing, soru also wrote mx-puppet-slack (again, for the lack of a better name). Basic message sending in both directions is already fully functional.

Exciting stuff! And all the more so for the third-person announcement style!

Gomuks had a bunch of changes:

The command for creating rooms and the image resolution limit were added by a new contributor, J. R., who is currently working on adding .well-known discovery support.

I've been having a good play with this and like it at lot! 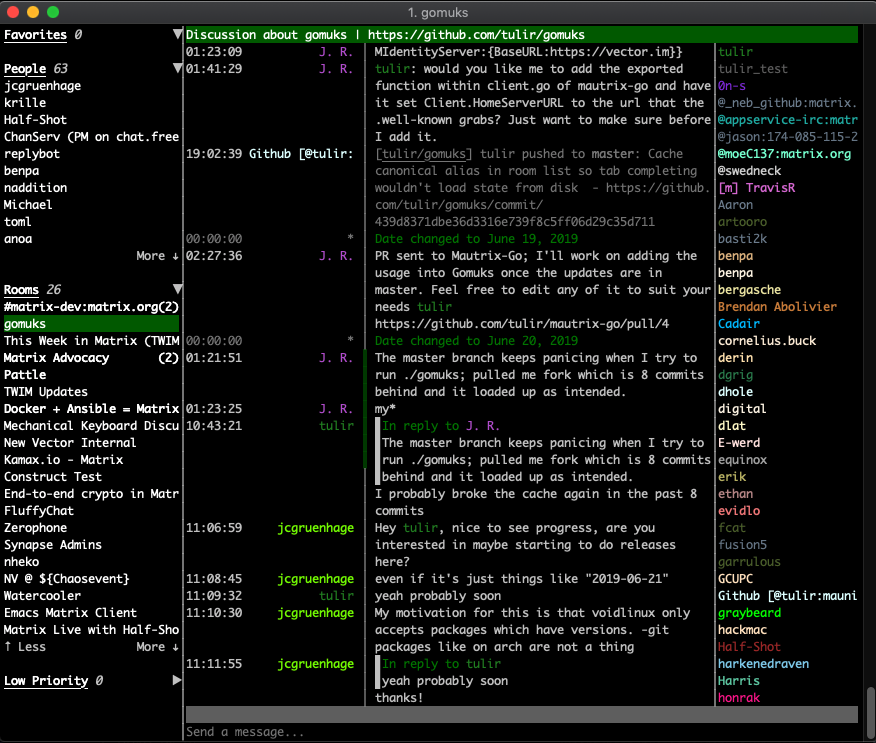 Improved support for more types of events in continuum this week: 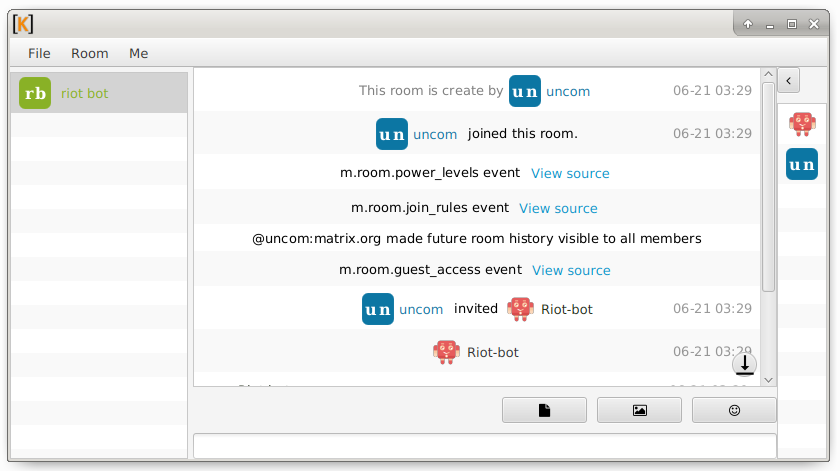 Wilko came in with this thorough update, Pattle development is MOTORING:

A new version of Pattle has been pushed to F-droid!

This release is mostly focused on bug fixing and bug reporting! This is why I urge all users who have been having problems before to try Pattle again! Chances are that your problem has been fixed, and if not, it will be reported with more information so I can fix it!

When an error is reported, this data is sent:

In some errors the homeserver domain is logged, I will try to prevent this in the future.

This release also includes preparation for an iOS release next week!

Fixes and other changes:

To install this release, add the following repo in F-droid:

If you stumble upon any issues, please report them!
You can login via GitHub and Gitlab.com, so it's really easy to do! (Logging in via GitHub did not seem to work previously, but it will now!)

If you would like to support me, you can now do so via Liberapay and Patreon. I actually need money for the Apple Developer program, which costs 100 euros per year to release Pattle on the App Store and Testflight.

aa13q is a GSOC 🎓 student, working on E2EE and mentored by Kitsune:

P.S.: Maybe somebody reading this is brave enough to play with Qt-based server implementation too? :)

Also: Riot Desktop was updated on the Snap Store.

Feneas (short for Federated Networks Association) just launched a new discussion forum aimed at creating a collaboration space for the federated web folk. Of course there is a category for Matrix as well. Have a peek! More info here: https://feneas.org/federated-networks-forum/

Diaspora mirror of this blog (meta)

Should you want to follow the Matrix.org blog using your Diaspora protocol compatible account, there is an unofficial mirror of the blog at [email protected] (disclaimer: I'm not affiliated with the account, just found it and reporting)

🤔 A company named "Slack" had an IPO, in which the share price closed up 50%. Slack are involved in "Instant Messaging" software and their product is known for the ability to connect to other services.

⏰ It's the first GSOC assessment NEXT WEEK. We'll get updates from all four projects, but notice that three of the projects have already provided updates above.

⁉️ Black Hat (from Spectral and more) is "experimenting with ruma-client-api and plans to create something awesome with it", Alexandre Franke (from Fractal) got a new laptop. Fox "just did [their] last java uni exercise ever and am now free from this curse, will have time to work on Neo".

🔨 This website has had a lot of polish over the last couple of weeks. We'll be focusing on the incremental improvements still needed, and also on adding new documentation. Let us know what you think we should do next.