Hottest GovTech Startup in Europe at The Europas tech awards

New Vector won Hottest GovTech Startup in Europe at The Europas tech awards last night for work on rolling out Matrix for France and elsewhere!

It was mainly judge-based, but public votes were used to filter.

We're super proud to have won the hottest Gov/Reg/Civic Tech startup at @TheEuropas for creating self-sovereign secure communications on top of @matrixdotorg for the Public Sector - particularly with @_DINSIC and @tchap_dinsic! (So proud we created a twitter account at last :D) pic.twitter.com/PGqoHx007T

They held a public vote, and Matrix won very convincingly.

With 1.0 shipped we are now starting to take a closer look at Synapse performance more generally and this will be a theme for us over the coming months. We want to improve not only large scale deployments such as Matrix.org but also optimise for smaller instances.

You may have seen a few trial servers run by core team members in matrix.org community rooms popping up and this is a precursor for a broader effort to make synapse more manageable on less powerful infrastructure. My own instance has been sat at a pretty steady 256MB of RAM.

Other than that, based on 1.0 feedback, we have been working on improving the Synapse upgrade path and expect to put out a new release next week containing the tweaks. Specifically this means improving configuration for Docker installs, and configuration management for sending emails.

Finally we’re bringing our push server Sygnal kicking and screaming into 2019 and will upgrade to Python 3, drop gevent for twisted and update our vendor specific libraries, not mention improving the monitoring and alerting. We’ll also add in open tracing which will help hunt down push failures.

Finally finally, look out for a DAG visualisation tool written by GSOCer Eisha referenced elsewhere in TWIM - we consider this to be seriously cool, and can’t wait to start using it in anger.

Note: 1.0 is the last release to support python 2 and postgres 9.4, the next Synapse release will drop support for both, see https://matrix.org/blog/2019/04/08/synapse-deprecating-postgres-9-4-and-python-2-x for more.

This week was spent working on a big revamp of ruma-events, the library that defines Rust types for the "events" used in Matrix.
After some discussion in #ruma:matrix.org, I decided to make a move towards treating ruma-events as a higher-level library. Previously, ruma-events has more or less offered Rust types that are exact representations of the JSON structures used by Matrix. However, by representing events this way, it would be possible for users to easily create values that, while valid JSON, would be invalid events according to the specification.
The way we're approaching this problem is by separating serialization/deserialization of JSON from validation of events.

Jeon 0.9.0 release. It is a release candidate for Jeon 1.0.0 which complies with the Matrix stable release 1.0.
Not a lot changes, just added missing endpoints and events.
Also I started to work on JeonServer, a Matrix server written on java.

Jeon is a set of Java interfaces to Matrix APIs, JeonServer is a proposed homeserver.

matrix-media-repo has received some speed improvements and is generally nicer to memory when using the s3 datastore. Give it a try and leave feedback in #media-repo:t2bot.io.

The GSoC project “Matrix Visualisations” has made good progress during this first period:

Note that the support of the Federation API has been postponed so I could work on this Synapse database backend. The UI of the application isn’t very beautiful or well-organised yet, as the effort is focused on the backends and core functionalities for now, but improvements will be made once these functionalities will be completed.

Remember you can check TWIM from last week to get a reference on the other three GSOC projects. 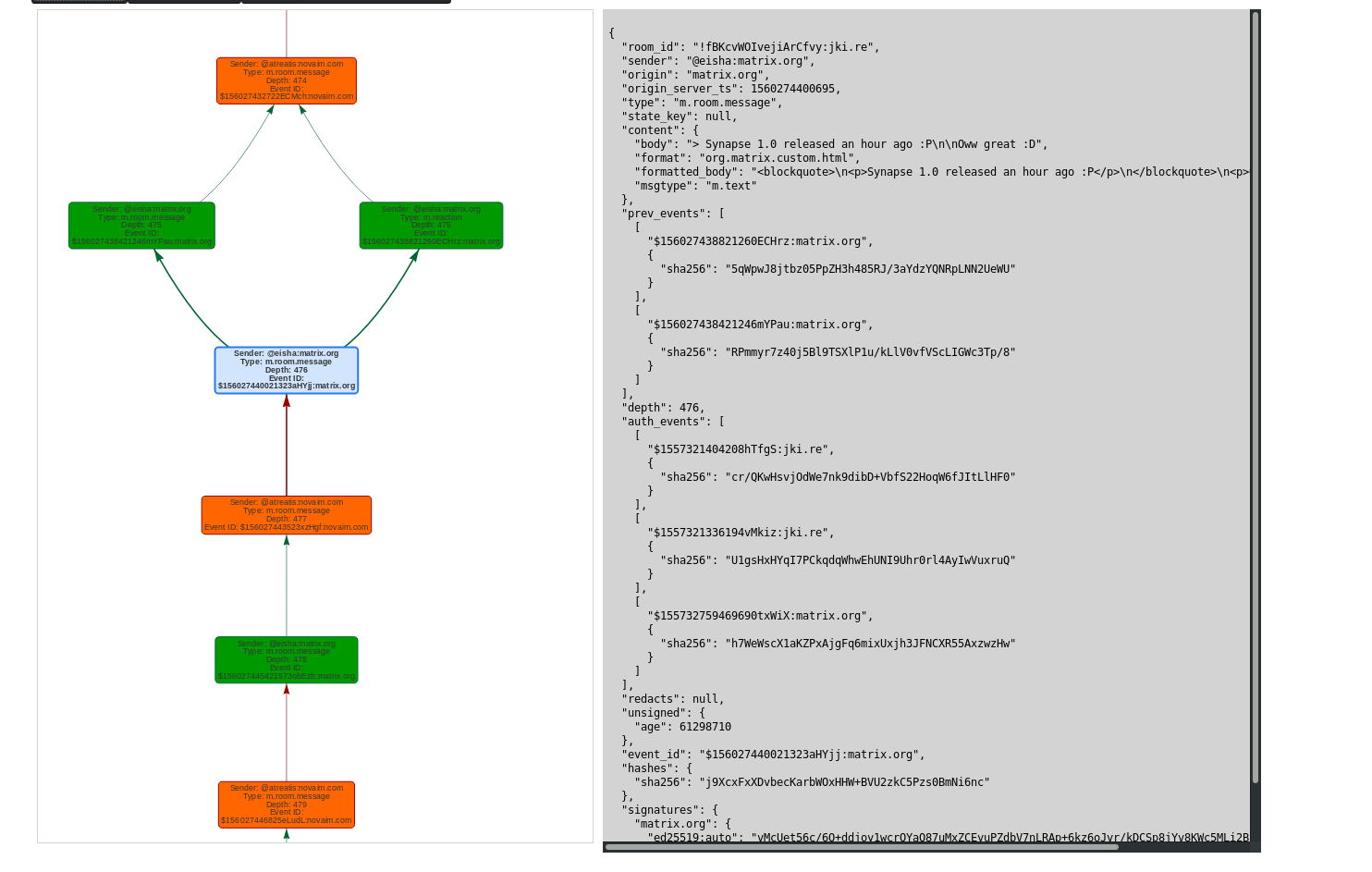 matrix-bot-sdk v0.4.0-beta.1 has been published with a bunch of improvements for appservices. There's still more planned before the final v0.4.0 release, however live testing is always better than unit tests. If you use the library, try npm install [email protected] and report any issues to #matrix-bot-sdk:t2bot.io.

Just cut a 1.2.0 release of the Ruby SDK, including fixes for timeout handling, some general code cleanup and documentation work, and a collection of getters and setters for most of the specced room state types

The freenode IRC bridge was restarted with the following fixes:

Sorunome has been working on her all-new bridge platform, mx-puppet-bridge:

This is work on the underlying bridge, protocol implementations still have to do their thing

This is a new one! It bridges tox over to matrix...or, well, more acts like a client (as tox doesn't have multidevice). Basic chatting was already functioning with only around 300 lines of code! The node toxcore bindings seem to only include support for 1:1 chats (and not the new group chats), so only that is implemented.

There is already substantial documentation available, and a Matrix room at #mx-puppet-bridge:sorunome.de.

Integration of Matrix into Delphus

Our company, Scintillating, has integrated Riot as an end-to-end encrypted chat, video, and voice call provider for our decentralized scientific study management system Delphus. We have created a method of linking Matrix IDs with Ethereum addresses to allow scientific researchers to look up participants and create chat rooms to talk with individuals in a privacy-preserving manner.

We didn't get a Spectral update for a few weeks! Black Hat reported:

Quite a few changes in Spectral in the past few weeks. The room list filter is improved, and it only shows rooms with unread notifications by default. User can optionally hide join/leave events. Empty avatar in direct chats is fixed. Each user now has a unique message bubble background color in the timeline.

A new version of Pattle has been pushed to F-droid!

Although this isn't the biggest release, it's still a big step: the first release of iOS will be available! The build is currently still in review by Apple.

You can download the iOS app via TestFlight soon, join #app:pattle.im to get the link immediately when it's available!

If you stumble upon any issues, please report them! You can login via GitHub and Gitlab.com, so it's really easy to do!

If you would like to support me, you can now do so via Liberapay and Patreon.

I've invested a lot of money in making Pattle happen on iOS: MacBook, Apple Developer Program, and an iPhone. Pretty costly, so any donations will be greatly appreciated!

continuum tweaked the appearance of placeholder avatars. To make most users appear visually distinct, continuum has always used colors based on checksums and usernames to generate placeholders if any user doesn't have an image as avatar. In previous versions, it always used two characters of the name. In the new version, if the username contains ideographic (usually east-asian) characters, a single character would be used. The reason is that the number of ideographic characters is vast and duplicates are less common, and most of them are close to a square or circle in shape so a single one would fit the GUI component better.

Last weekend hummlbach (from the UBports community) visited me and we worked 18 hours on implementing end2end encryption. We are now able to send encrypted messages. Key sharing and decrypting will follow.

Not available in the released version yet, but join #fluffychat:matrix.org for more info. Also: 18 hours! Woah.

Fractal released a 4.1 development version, which was added to the beta channel of flathub. danigm is eager to get 4.2 out soon and is trying to fix the last few bugs we want to see gone before then. He already opened a few merge requests.

matrix-enact, read-only client which performs the contents of rooms with Web Audio API

Some time ago I made a toy: https://play.matrix.org/matrix-enact/

This is a read-only Matrix client, which takes the contents of a public room and "enacts" it, that is, it performs it using the Web Audio API in your browser

The original intention was to be a demonstration of what can be done with /context endpoint, but the project scope expanded a little. Hopefully people find it fun!

Get the source code here: https://github.com/benparsons/matrix-enact

Slavi and his many helpers have been working on matrix-docker-ansible-deploy:

matrix-docker-ansible-deploy has seen a lot of work on bridging lately.
All currently existing bridges (Discord, Facebook, IRC, Telegram, Whatsapp) have been redone in a way that makes their configuration completely playbook-managed, as well as extensible.
Besides this, with Synapse v1.0 already out, we've taken the opportunity to simplify the installation instructions a bit.
If you haven't upgraded recently, now would be a great time. As always, be sure to take a look at the CHANGELOG before doing so.

Update from the Matrix on Debian team

Following the announcement that mxisd would not longer be worked on, ma1uta has stepped up to provide support:

I forked mxisd (https://github.com/ma1uta/mxisd) and will provide support this project. You can ask about help in a new room #ma1sd:ru-matrix.org
A new temporary name will be ma1sd (thanks Dandellion ).
Due to changing maintainers I start to prepare the new 2.0.0 release and should audit code and dependencies.
Also I forked matrix-synapse-rest-password-provider (https://github.com/ma1uta/matrix-synapse-rest-password-provider) because it often uses with mxisd. Docker image, ansible support, debian, nixos and archlinux packages are temporary unavailable due to code auditing and changing maintainers.

Link existing unix accounts with accounts on a Synapse homeserver

Cos created an article detailing how to link existing unix accounts with accounts on a Synapse homeserver.

I made a Matrix bot that uses reactions to do polls! The code is available at https://github.com/babolivier/matrix-poll-bot (with a screenshot of how it works) and you can invite @poll-bot:abolivier.bzh in your room if you want to try it out 🙂

Bot works by taking a list of emoji + responses from a user, then makes a new message event with those emojis each voted for once. In this way, you can quickly make a reaction-based poll.

The reactbot I announced last week has been updated to support arbitrary response content instead of just reactions. As examples, the repo now has a stallman interjection bot (ported from this and a replacement for jesaribot. Reactions as responses are still supported and the repo still has the TWIM cookie bot example too.

Ananace has been looking again at a release tracker they'd previously been working on.

kernel.org have set up an ActivityPub instance (see https://people.kernel.org/about.) Not strictly Matrix but interesting that they decided to move to a federated platform.

First GSOC evaluation submissions were due this week, all four Matrix projects are proceeding well. See Eisha's update above, and the other three last week.

red_sky, nheko maintainer, was seen to say: "I know there hasn't been much activity from me lately. I was on vacation last week. I'll be getting back to work on 0.7.0 today"

The Europas awards ceremony was held at a venue next to my old flat. Small world! Small flat too.