I chatted to Rick about the new Small instances available on modular.im.

No MSCs have been approved.

(kudos to anoa for providing this well-formatted summary section)

there's now a pull request in for full native math rendering support (via KaTeX), which will replace the shoddy bot that I made last week (or whenever)
https://github.com/matrix-org/matrix-react-sdk/pull/3251

This week we’ve been working on implementing identifier hashing in sydent, a brand new installer for Synapse, we’ve trialled some new db perf improvements which look very promising (more on this soon) and finally very close to an all new implementation of room search.

Next week we’ll push out the all new Sygnal, continue with the installer and room search and pick up some tasks under our privacy umbrella to ensure that Synapse is not holding onto any data that it does not strictly need to.

Dendrite progress marches forwards. This week we had:

Cnly’s GSoC period ends on August 26th. He has been a massive boon to the project’s cadence so far and we hope he will continue even after GSoC ends when he has time :)

yuforia has this update about koma, the library used to power continuum:

Provide automatic deduplication and rate-limiting when downloading media resources. This improves performance of GUI applications, where avatars of many users may appear on screen at once, and some of them may be identical.

libQuotient's master branch now supports sending and receiving reactions, and receiving message edits. We also have another PR in the works from aa13q that would add support for events decryption, as a part of his GSoC endeavour.

Nightlies of Fractal are currently stuck on a 2 weeks old build because of one of our dependencies… but the long awaited 4.2 stable release is out! You can get it out fresh from flathub as usual.

Lots of news about Neo!

You can try the compact mode at https://neo.pixie.town/app/?compactMode=true.

Hey folks, first an update from the bridges integrations side. We've brought back snoonet and oftc on the integrations menu so you can once again connect matrix rooms to these networks. Other networks should work as standard.

On the matrix-appservice-irc side we've made a few fixes to the handling of IRC modes (things that handle how users should behave) when bridged to IRC. This should hopefully make opping and voicing users more reliable. There are a few other fixes in the pipeline too, so a release isn't too far off.

I had an adventure this afternoon into the world of bridging again, and have made a Github to Matrix bridge. At the moment you can join aliases and saturate your homeserver with the entire history of a issue or PR. You can also chat to folks on issues in realtime.

Check it out at: https://github.com/Half-Shot/matrix-github 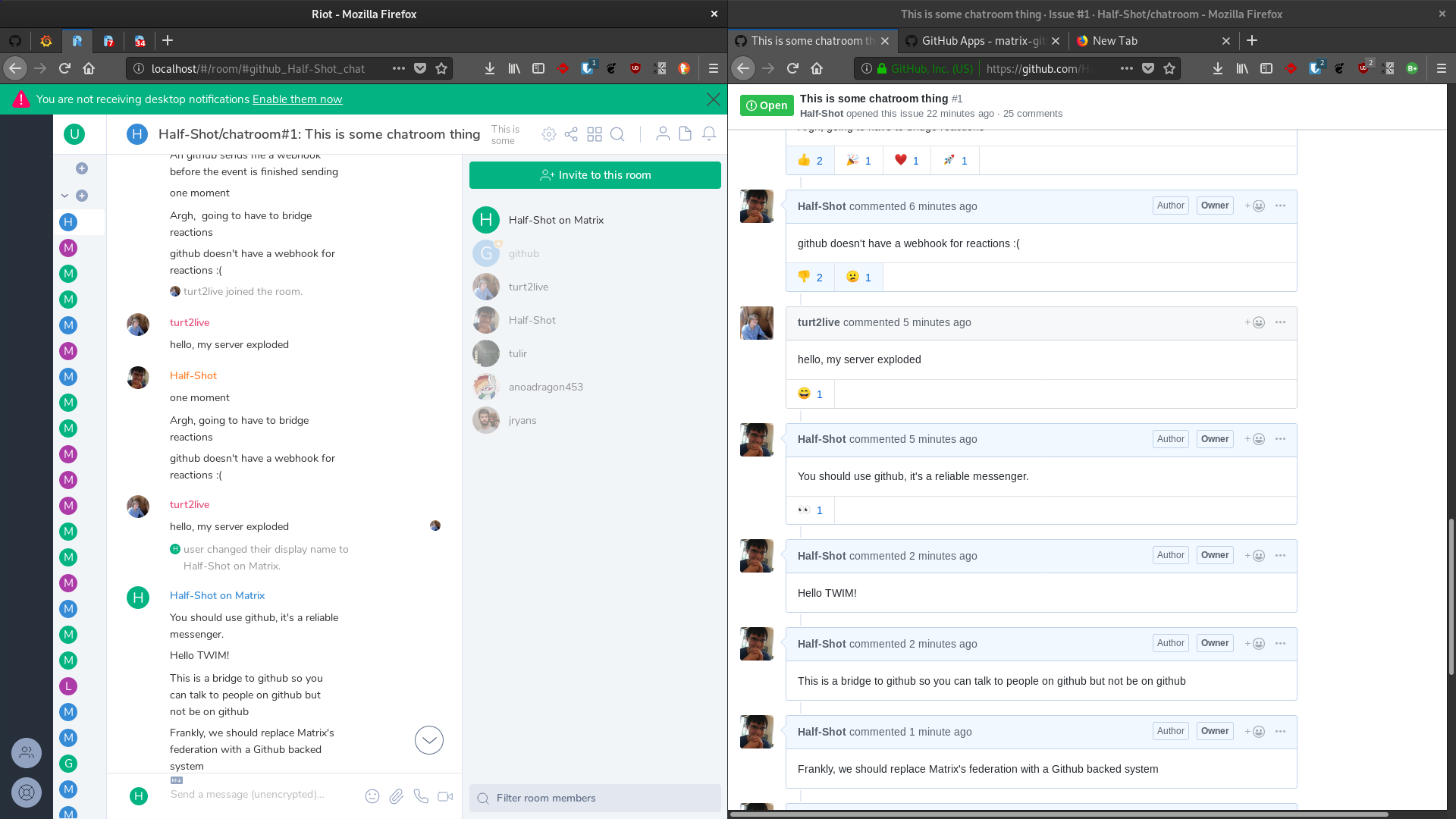 Just pushed a debian-based K8s-optimized image as well, it's 150MB larger than the alpine one, but on the other hand it comes with jemalloc support so it's nicer on the RAM instead.

I finished version 1.5 of my small command line based federation tester. The bash script relies heavily on popular Unix tools like awk, curl, jq, sed and so on. Compared to https://federationtester.matrix.org, the outputs are a little more detailed and additional tests are performed, especially on the supported SSL protocols. Currently, it has only been tested under Linux.
The current version improves the handling of port in the .well-known and DNS SRV configuration.
You can download it from #cli_federation-tester_de:matrix.chat-secure.de or directly via https://matrix.chat-secure.de/_matrix/media/r0/download/matrix.chat-secure.de/MDwYLdrxRdudmcgDzBEALCzN

jcgruenhage has been working on a bot in relation to the startup he's working with:

I made a bot for issuing Json Web Tokens to matrix users based on what homeserver they are on. It's implemented as a maubot plugin (best way to write bots right now) and licensed under the AGPLv3. You can find it over at https://gitlab.com/famedly/bots/jwt, and talk about it in #jwt-bot:famedly.de
As for the usecase, we want to give people from customer homeservers access to an API component, but don't want to maintain a separate account database. This way, they can request a token from the bot and then use that to interact with the API component

jaywink used an underrated HTML tag tag to inform us:

This is great - we must tip the hat to tulir, creator of this widely-used bridge.

Interview about DINSIC's use of Matrix (all in French)

So that's all I have to say to you right now! See you next week, and be sure to stop by #twim:matrix.org with your updates!