It's CCCamp 2019 this weekend. Tonight, anoa will be leading an "Install Synapse" workshop in the Librehosters Village- keep decentralisation growing! 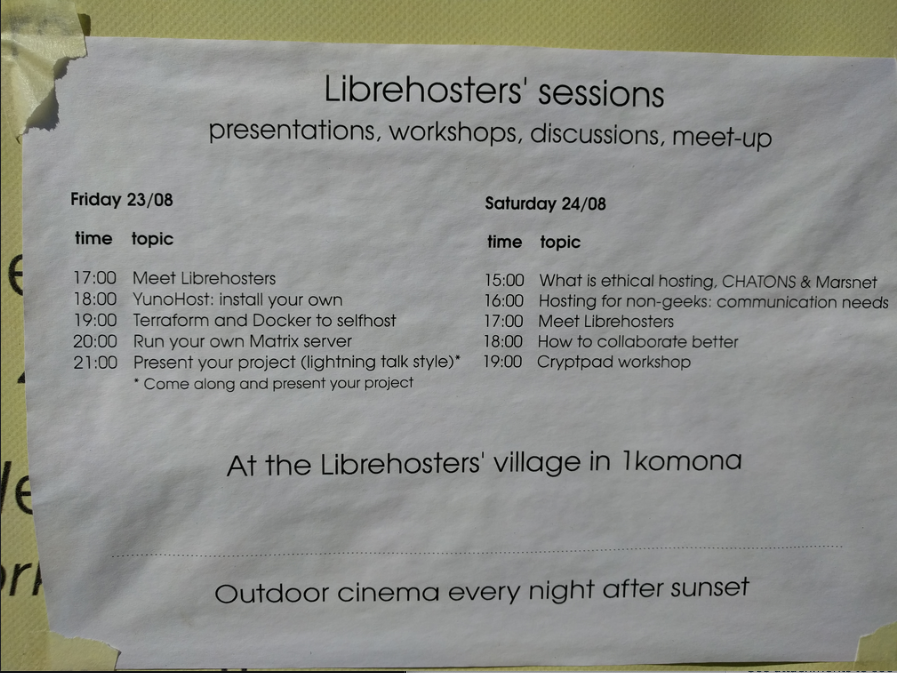 This week we’ve been working on getting our brand new room directory implementation ready, creating a new Synapse installer, and creating a TURN server testing tool. We’ve also been pushing on with the privacy project and fixing up some bugs and perf issues.
Next week it’s all about getting the room directory out of the door, shipping the installer and continuing on with the privacy project. We are in the early stages of a project designed to reduce the load caused by outbound SSL connections, it is looking very promising. We’re also going to give the sqlite->postgres porting script some love as well as working on some message retention ideas, and also ways to reduce the meta data we store.

Gitter bridge is back

The gitter bridge is back to working order again today! We've made changes so that Gitter side admins can now issue a !matrix kick|ban name command to evict users who are causing issues, rather than relying on reports or matrix side admins.

The matrix-appservice-bridge library also saw its 1.10.0 release this week, which has experimental support for bridge errors and also has a bugfix related to room upgrades.

Discord bridge will soon use matrix-bot-sdk

Finally, the discord bridge has very nearly switched to Travis's bot SDK stuff. We are very close to a release, so please stand by :)

I've hosted a version of riot with the changes from https://github.com/matrix-org/matrix-react-sdk/pull/3251 (for math support) built in so that people can test/use it if they want. It can be found at https://www.pigeon.digital — please do let me know about any bugs you may find!
there is now a room specifically for the LaTeX fork hosted on www.pigeon.digital where you can leave any feeback, report any bugs, or ask for any help: #pigeon.digital:matrix.org

A new version has been pushed to F-Droid, Google Play and TestFlight!

Pattle is now available on Google Play and the official F-Droid repository!

Expect the new version to be on most platforms in 2 days (however, Google Play in a few hours).

If you stumble upon any issues or would like to suggest features, please do so here! You can login via GitHub and Gitlab.com!

If you would like to support me, you can do so via Liberapay and Patreon! 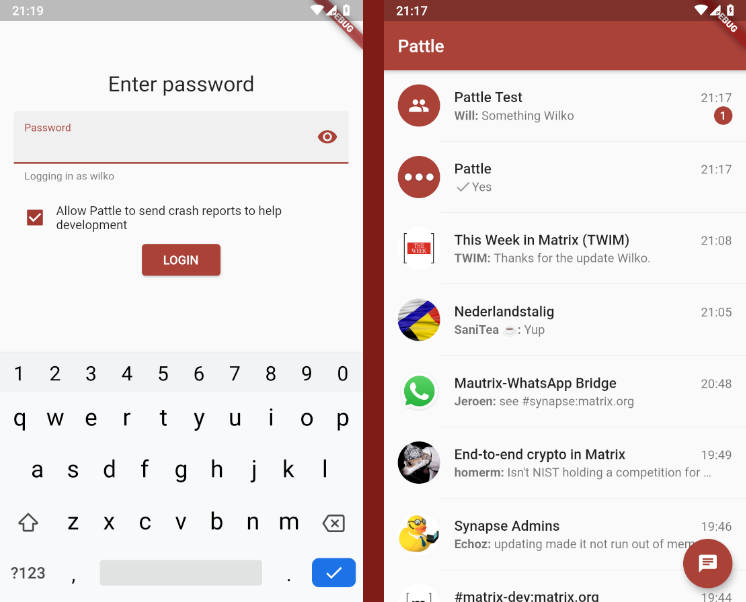 Very interesting project: matrixcli is a versatile command line client using the matrix-python-sdk. It's not a conventional IM client, rather it exposes access to Matrix rooms so you can pipe to them as you would other Unix utils.

Neo's refactoring is almost done, with the latest changes being css-modulesifying the old stylesheet
We're also looking for nice domain name suggestions, to house the soon to be redesigned project page

The GSoC is soon coming to the end this year and I'm happy no announce that receiving of the encrypted messages PR is here! https://github.com/quotient-im/libQuotient/pull/346 A significant amount of work still needs to be done (session storage, sending messages, device handling, attachments). And I'm interested to implement it after the summer period since I've already dived into the subject :) Here's the small demo of the receiving messages process: https://youtu.be/gGykLh4mVDg

Jojii created a new Java-based implementation of the Matrix CS API: Matrix-ClientServer-API-java, they call it "A small and simple java API for the Matrix ClientServer Protocol".

They created Matrix-Grep-Bot using the API.

For people looking for a rather flexible ansible role just for synapse, https://gitlab.com/famedly/ansible/synapse got your back. You can use it to deploy synapse with pip or docker, depending on what you prefer for your host. It's an actively maintained fork of https://github.com/matrix-org/matrix-ansible-synapse, which has been archived recently and was unmaintained for a while before that. It's just been updated to v1.3.1 too.

This increases the number of services/protocols that the playbook can setup bridging for to 8: Telegram, Whatsapp, Facebook, Google Hangouts, IRC, Discord, Slack and Email. Learn more in Bridging other networks.

matrix-docker-ansible-deploy gets support for all Synapse config options

matrix-docker-ansible-deploy can now harness the full power of Synapse, thanks to our newly-added support for Extensible Synapse configuration.

Just built a quick maubot plugin to add a /health endpoint to maubot, so that database failures and other brokenness can be tracked and dealt with appropriately.