This week privacy items have dominated, but we’ve also been edging towards getting our room directory improvements out, shipping a new configuration creator and making further progress on the federation side bus project to improve performance of smaller instances.

We also deployed open tracing on matrix.org, which will help a lot in tracking down all sorts of strange behaviour in the wild and fixing some bugs in the sqlite -> postgres migrator.

Next week we’ll land the room directory improvements, much of the privacy work, and have the configuration creator ready for testing.

Construct added user room listing support so that you can find out what public rooms a user is a member of should they choose to not be invisible. To find out the list of rooms for a user, simply open the room directory in Riot and type a user mxid starting with @...

Construct is implementing the concept of invisibility for users:

The exact mechanism for invisibility is not completely finished but there are obviously some limitations for this feature:

Construct is eager to implement any MSC's regarding user room and group membership listing over the federation.

Construct is written for maximum performance in C++, and is developing rapidly - join #construct:maunium.net for more info.

matrix-media-repo has received a bunch of updates regarding quarantining and purging media - see the admin docs for more information. There's also an s3 upload bug fix if you're using that.

GitLab bot to be re-written as a maubot

lorico has been rewriting my old GitLab bot to python/maubot: https://github.com/maubot/gitlab/pull/23. Progress on that is looking very good and it'll probably be ready within a week or two.

I decided to make a minor mautrix-telegram release with some small fixes, since v0.7.0 will take a while still. v0.6.1-rc2 is out now, the full release will probably happen next week if nobody finds any problems. Main changes:

Tidy update from Bruno this week:

This week we were doing the last bits of the privacy work, and fixing bugs and adding a format bar in the new composer (still behind labs flag).

We’ve also been planning the First Time User Experience work, which will start at full speed next week. This is an effort to address some issues that new users hit in the first days of using Riot. See https://github.com/vector-im/riot-web/projects/16#card-25137120 and Matthew talking over the details at https://youtu.be/JYsiHSL0lEA?t=710. Letterboxes in the left panel will likely only be removed as part of the new community project though, as we need parts of the new community UX to keep things usable for power users.

Also, if you're using https://riot.im/develop please enable the new composer in Labs, it works well and deserves testing. 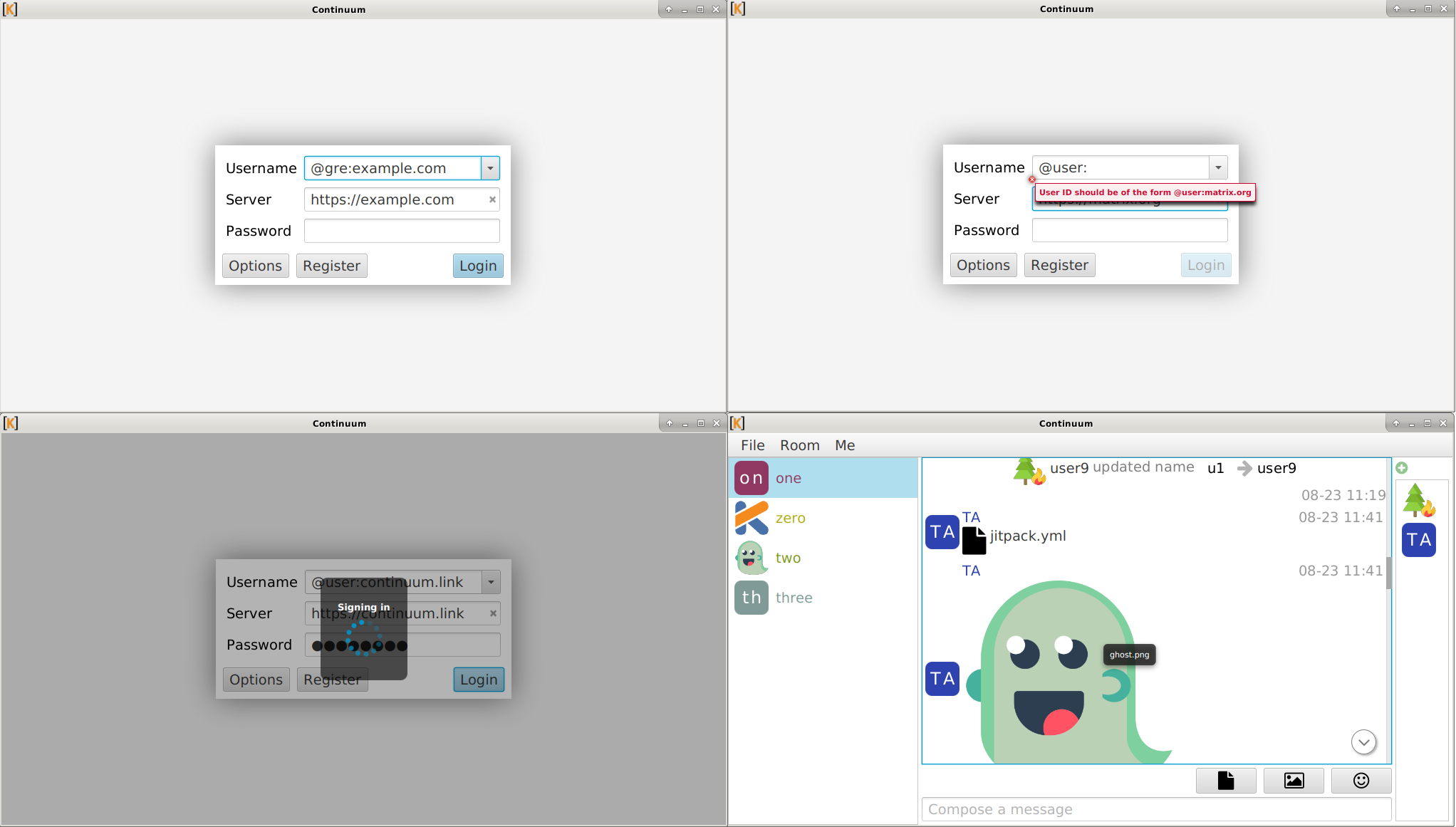 koma the Kotlin library behind Continuum:

A new version has been made available and should soon be on F-Droid, Google Play and TestFlight!

Expect the new version to be on most platforms in 2 days.

It's not the biggest release, but a release nonetheless.

Please let me know what you think of the separation of personal and public chats! Currently it's implemented using a bottom navigation bar, but tabs could also be an option (which is closer to what WhatsApp does) 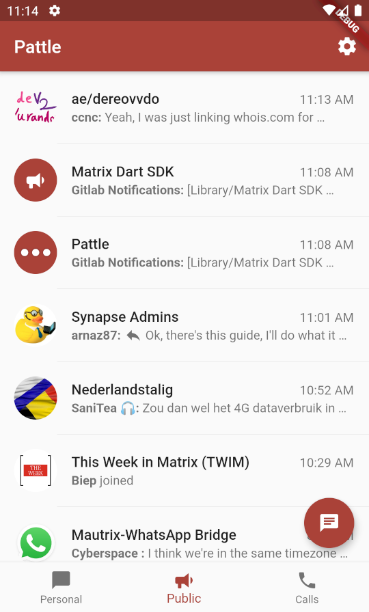 All teams when I asked responded:

roughly 250k are (bridged) from Telegram, the rest is from Discord. (there's some very small numbers which include the bots, webhooks, and other tiny bridges, but together they form less than 100 users)

Inspired by a question in the Matrix HQ channel, I've built a (rudimentary) room list viewer at https://matrix-rooms.cryto.net/ - you can just enter a homeserver (hostname) and see all the public rooms on it, without needing to log into anything. This might be useful for showing other people what kinds of rooms exist on Matrix!

OI Chat has been updated and now connects blockchain users on Blockstack and EOS (and the rest of the matrix universe): https://www.producthunt.com/posts/oi-chat-2 The sever has no passwords or requires permissions by other social account providers, it verifies the authenticity of the user using properties of the blockchain IDs, it names registered on the blockchain.

matrix-fly-paper is a new bot project intended to help automate server and room moderation. It's currently not ready for any kind of use, as I'm trying out serious TDD and attempting a functional approach to break from my OO training. Feedback is appreciated, stop by #matrix-fly-paper:lost-angles.im to talk shop

If you're interested in such things, there is an existing tutorial on how to use matrix-bot-sdk for exactly this at https://matrix.org/docs/guides/matrix-bot-sdk-room-admin-features.

About a month ago we started selling merch at shop.matrix.org, and WOWEE ZOMG we sold a lot of stuff! If you are happy with your purchase I'd love to hear from you - share photos of where you put the stickers or you happily wearing the t-shirt in #twim:matrix.org and I'll make a little collage.

If you are not happy with your purchase then please message me at @benpa:matrix.org and I will try to make it right.

You should complete this EU-related FOSS survey, and if you wanted to say nice things about Matrix that would be fine by us.