No MSCs have entered FCP

In fact they're having a standoff between Matrix, Mattermost, Rocket.chat and Slack.

We're eager to see the results of this trial, the feedback will be very valuable for everyone regardless of the final outcome. (Though of course, we are optimistic..!)

Keep up with the discussion in various places.

This week sees us complete the last items on the privacy sprint and we expect a release to land early next week. Aside from that OpenTracing is now live, the configuration tool is ready to go (modulo the new Synapse release) and we’ve been trialling out room directory improvements.

Next week expect Synapse 1.4 to land which will contain privacy sprint support as well as a host of bug fixes and perf improvements.

MAJOR milestone for Half-Shot this week!

Hello Twimians! After many weeks of creativity, pain, and slack, the bridge team are proud to present our first release candidate for the slack bridge. This release brings in a ton of new changes that should massively improve the slack<->matrix experience. The headline features are Postgres support, Puppeting, RTM (websocket) support as well as an entirely refactored codebase written in Typescript.

This release has made heavy changes to the schema of the slack bridge and as such we are not recommending that anyone upgrade their existing slack bridge instances to 1.0.0-rc1. A migration script is currently being worked on, but for the time being existing installs should not be upgraded to 1.0.0 release candidates.

HELLO IRC FANS. Or possibly not irc fans, if you are running a Matrix bridge.. After a long period of not-being-ready the IRC bridge has a new RC, https://github.com/matrix-org/matrix-appservice-irc/releases/tag/0.13.0-rc2. Hopefully the last, but time will tell.

There is also now a keybase bridge

This is ready for testing, room here: #keybase:half-shot.uk

Hi all! I haven't been around much because our homeserver chugs a little when federation is enabled, but I've got a few updates to share about Scylla, the Elm-based web client for Matrix: We have released FluffyChat 11.16 with minor bug fixes and updated translations. A nice new feature: Messages which contains emojis only are now displayed with a much bigger font. 💕 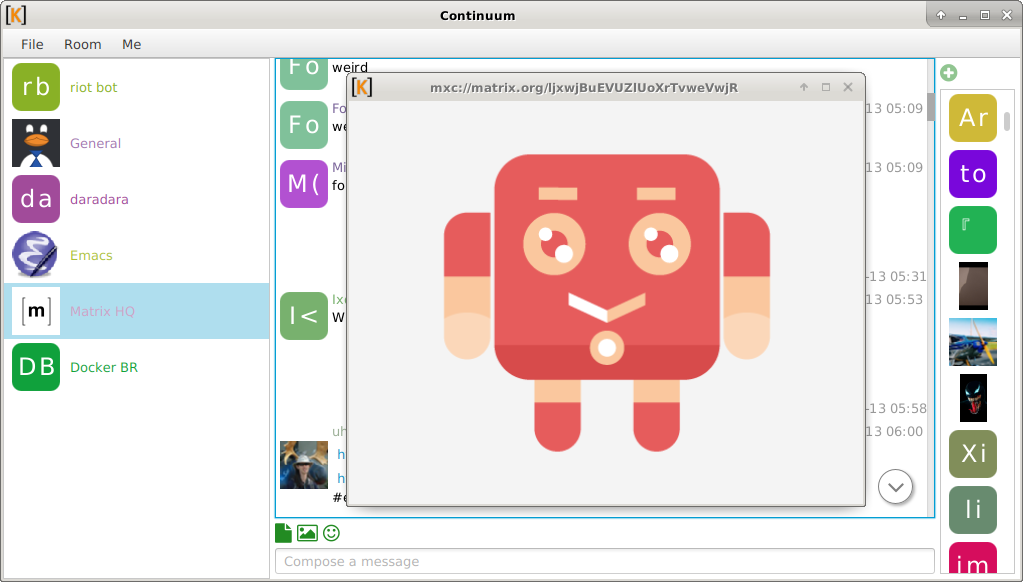 Since last time, Fractal got many translation updates. Current coverage can be seen here. We’re also now disabling the message entry if the user is not allowed to send messages to the room and fixed a crashed when logging out or logging in with the wrong password.

I've been working occasionally for the past months on a basic matrix web client called Brawl, focusing on performance, offline usage and working on my old phone. I recently got it in still limited, but somewhat useful state. Unsure how much time I'll have to keep working on this regularly, but wanted to share it here anyways. Check it out on https://github.com/bwindels/brawl-chat, there's a GIF of it in action 🙂

We’ve made good progress on our first FTUE (First Time User Experience) project: “Improve add & create room”, with only the makeover of the create room dialog remaining. Next week more FTUE projects, and we hope to get some progress on cross-signing, barring any other distractions.

i wrote a toy client in ~8 lines of bash (thanks to anoa for fixing it up): https://github.com/ara4n/random/blob/master/bashtrix.sh; context: https://news.ycombinator.com/item?id=20948530

due to the large number of invite-spam attacks and increased interest in the synapse-simple-antispam spam checker module, matrix-docker-ansible-deploy now has support for installing and configuring it.

Had some free time and ideas this week, so I've improved my release tracking bot to now correctly handle repos mixing full releases as well as tags (lightweight and/or annotated). GitHub's API really sucks in the tags department, so this required a rework to GraphQL queries instead, and it's looking good on that so far. The bot currently still only handles tracking all starred repos of a given account on GitHub, but I'm working on GitLab support, as well as support for tracking arbitrary repos. And a provisioning API is also somewhere on the roadmap,