Last week Matrix had a presence at UbuCon Europe and PyCon Ireland. We gave workshops on using Matrix to create bots, and also a session on installing Synapse (see also: Brendan's entry below!)

Hey #PyConIE! We hope you enjoyed the Matrix workshop, find the slides and code samples at https://t.co/aT1dDuEcm1 and make sure to ask any more questions! pic.twitter.com/C2qwV5R3gl

Tomorrow I'm off to sunny Manchester with Michael from the Ops team. We'll visit OggCamp, where we'll show off Matrix with a fun demo I previewed on Matrix Live a few weeks ago.

Matrix will ALSO be at:

In other Spec news, Matthew uncovered a stone tablet describing what would in future be known as "MSC2324": 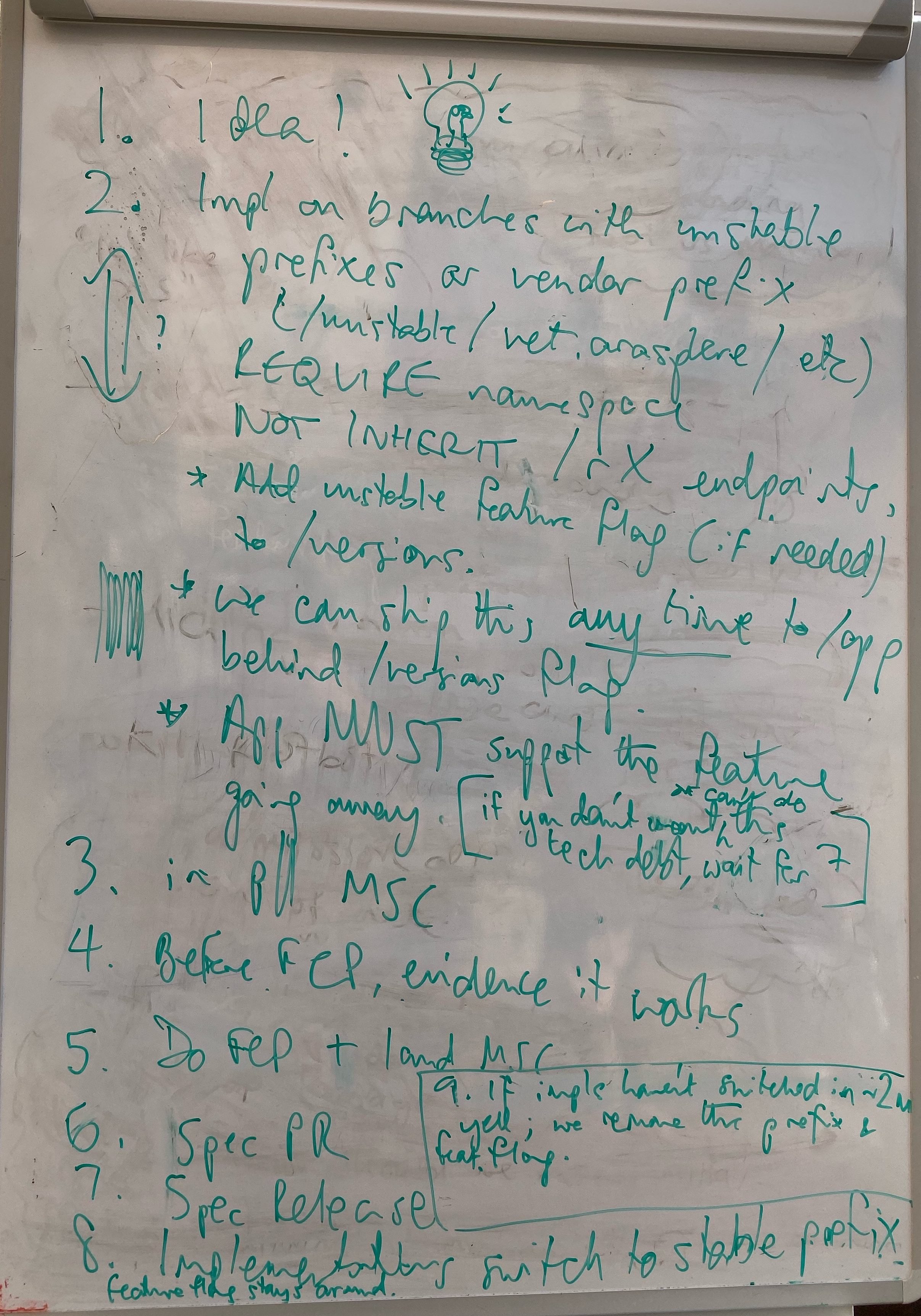 For a workshop anoa and I did at Ubucon Europe last Sunday on how to install Synapse, I worked on a side project that creates a server, attaches a domain name to it and installs Riot and Caddy on it. Attendees can then SSH into it, follow the instructions to install a Matrix homeserver, and use Riot to register an account on it, log in, and join a federated room with all of the other attendees' homeservers in it. We tried it out last week-end for the actual workshop and it worked quite well 🙂 The project is called Install Party, and lives at https://github.com/babolivier/install-party, and if you want to chat about it I've just created #install-party:abolivier.bzh 😉

This week we've been thinking about the future and brainstorming on ideas to improve perf for small instances and sparing some cycles for MSC1228. Next week we'll return to improving IO usage on matrix.org.

On Riot-iOS land, Riot-iOS 0.10.0 has been released on the App Store. We have started a stabilisation sprint. In parallel, we are still polishing the privacy work

RiotX: we are merging waiting PRs and have postponed the release to ensure a maximum of stability and polishing. The release will be done at the beginning of next week and will contains: read marker, camera picker and improved file picker, share to RiotX capability and many bugfixes.

Heya, matrix-3ds-sdk is a new matrix sdk - for the Nintendo 3DS! It is still deep in development, so expect bugs, some things not working properly etc. Current features include:

If you are into 3DS homebrew development or are interested in helping out making a full client based on this, please contact soru (@sorunome:sorunome.de)! 3ds homebrew dev is pretty new to her, so there are plenty of open questions / debugging help would be great!

This is really impressive, I'm looking forward to playing with it. (I'm sure someone at the office must own a 3DS!)

I uploaded the synapse 1.4.1 image to mvgorcum/docker-matrix:v1.4.1 within about half an hour after the release

I've made a docker image of the develop branch of synapse, and automated it to build daily. It's on my docker hub as mvgorcum/docker-matrix:develop, based on the avhost dockerfile. Note that there are no checks, the image is simply built from the develop branch of the synapse git repo every night.

just pushed Version 1.4.1 of the Matrix Synapse for Kubernetes packaging. A bit fiddly to do on a phone 🙂

I'm building the Synapse 1.4.1 multi-arch docker image. It will be pushed to Docker Hub in a couple of hours.

A special section this week from the guy with one editor open for everything, tulir:

I haven't done anything on my own projects this week, but I did contribute to a bunch of other projects:

The first two are already merged (and SmsMatrix even got a new release on f-droid), the html parsing is waiting for code review and the emoji picker and reply rendering are waiting for design review.

Also, I made a read-only status.matrix.org rss feed room since some people wanted one: #matrix.org-status:maunium.net. I don't remember if I TWIMed these before, but #xkcd:maunium.net and #commitstrip:maunium.net are similar read-only rooms, new xkcds and commitstrips are posted there whenever they come out.