This week I spoke to Annie from the Ditto project.

I opened my first MSC, to use webrtc for streaming file transfers from device to device (rather than account to account)

This week saw work on implementing message retention policies, the continuation of migrating matrix.org to new hardware and some other little fixes.

The public rooms directory is also set to private by default now. Please read the accompanying blog post for the reasoning behind it.

We missed it at the time, but the Ruma project has some updates to share, focused on the ruma-events projects.

Over in #matrixservers:raim.ist, grin provided this list-of-lists of Matrix public home servers:

mautrix-whatsapp now has basic relaybot support. Since WhatsApp doesn't have usable bots, relaybot in this case means using a normal account as a relay. To enable the relaybot in your bridge instance, copy this config block into your config, update is as needed, and simply log in normally in the configured relaybot management room.

Hey all, matrix-appservice-slack 1.0.2 has been released. This contains a small number of bug fixes and doc changes.

A new version has been made available and should soon be on Google Play!

Note that this version will not be on TestFlight (yet) because notifications are currently only implemented on Android (using Firebase, so same goes for F-Droid for the time being).

This was done for a future feature (registration), however, a different approach will probably be taken.

If you stumble upon any issues or would like to suggest features, please do so here! You can login via GitHub and Gitlab.com! 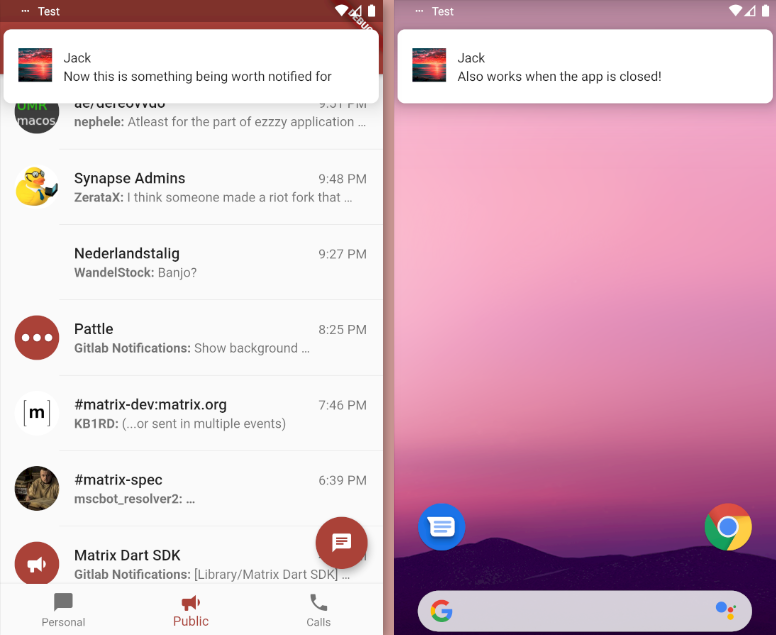 Riot web should gain a new design for the member panel, with a UX more suited for a world where cross-signing is a thing. Will land today or early next week behind a feature flag on /develop.

There are some screenshots on the PR: https://github.com/matrix-org/matrix-react-sdk/pull/3620

Riot iOS: We have fixed the display of terms for integrations. Riot iOS 0.10.2 is on his way to the App Store

RiotX: We are working on registration and login flow. Also spoiler are rendered and can even be sent using /spoiler command. It's also possible to block (ignore) and unblock users. Performance have been improved, and we are now using the new FragmentFactory. We are working on room detail screen, sticker rendering, and lots of other fun features. We schedule a release at the beginning of next week.

v0.4.0-beta.15 of the matrix-bot-sdk has been released. v0.4.0 final is a themed release for lightweight bridges, and so far much of the common functionality is there. Some of the more niche and large features have yet to land, but the final release is still on the horizon (see what's left here). Please give it a test (npm install [email protected]) and report any issues to #matrix-bot-sdk:t2bot.io.

Seshat got a new release 🎉. Seshat now supports transparent index encryption. The PRs for Riot-desktop have been updated and encryption has been enabled for the index. The PRs are currently awaiting review, encrypted search will come to a place near you really soon™.

I (and hopefully others) feel that matrix needs more home servers. That's why I wrote a guide for setting one up using free resources and @benpa was kind enough to include it on matrix.org: https://matrix.org/docs/guides/free-small-matrix-server/

Regarding the recent discussions about room security, Slavi has been thinking about default settings for his ansible playbooks:

I wasn't entirely convinced what we should do about it. For my own personal (family & friends) homeserver, I have a few rooms published (this room being one of them), which are all public and OK to be published publicly. I was okay with the old defaults. Still, I can see how people may expect stricter defaults though. I've leaned on following this advice and making it not publish by default. I've made that change here.

Matrix-Alertmanager, a bot that relays Prometheus Alertmanager alerts to Matrix rooms, gets a new release v0.1.0. Thanks to "daniego" the messages are now HTML formatted. Also dependencies have been bumped, Matrix JS SDK by "Lyr" and all the other deps by me. For more info: https://git.feneas.org/jaywink/matrix-alertmanager

I've made a presentation about Matrix at the local 2600 meetup at Saint Petersburg, Russia recently. And now translated the text retelling into English too. It's an introduction presentation in general but (thanks to kitsune! :) it also contains good comments about the parts I've missed :) Would be happy to get feedback about the typos/etc. I hope it could be helpful to somebody who is willing to tell about Matrix in other local places :) https://aa13q.ru/#!posts/2019-11-01-matrix-2600/meta.md

Not a part of the organizers, but syncing here for wider reach. There is a "FediConf 2020" conference being planned to happen in Barcelona sometime between May and September next year. It will be a conference for a wide audience of federated folk, so Matrix people might be interested in joining up. There is a poll for dates, a forum and also a Matrix room: #fediconf:matrix.libertalia.world

in a complete coincidence with aa13q, I also talked about Matrix at Tokyo LUG. Plenty of good discussion. TLUG folks are extremely interested in decentralised identities and data retention as next most important frontiers in Matrix evolution.