I chatted to Kilian from the new Nio project about his progress on a new iOS client.

Yesterday we announced the availability of zipped hoodies! The resulting avalanche of orders was a shock for our local Post Office, who watched with surprise as I burst in, laden with packages like a mule.

Here's your news for what happened in spec-land last week!

The spec core team is focused on implementing a bunch of MSCs so that we can make progress with the spec.

This week we've mainly been tying up loose ends on the matrix.org data centre migration. Outside of that one interesting feature to land on develop is that of configurable message retention. It means that as an admin you can set a default period after which messages will be removed from the server (a year say), what’s more the default is configurable on a per room basis via state events. Note, this feature applies to messages only, not media (on its way!). Configurable message retention will be make it into the next versioned release.

After 2 long years, matrix-synapse-ldap3 has finally gained another release: v0.1.4. If you want to allow users to sign in to Synapse using their LDAP accounts, then this is the module for you.

Get the release notes here: https://github.com/matrix-org/matrix-synapse-ldap3/releases/tag/v0.1.4

As if all that wasn't enough, how about this image of Fractal running on a Librem5, from Adrien Plazas: 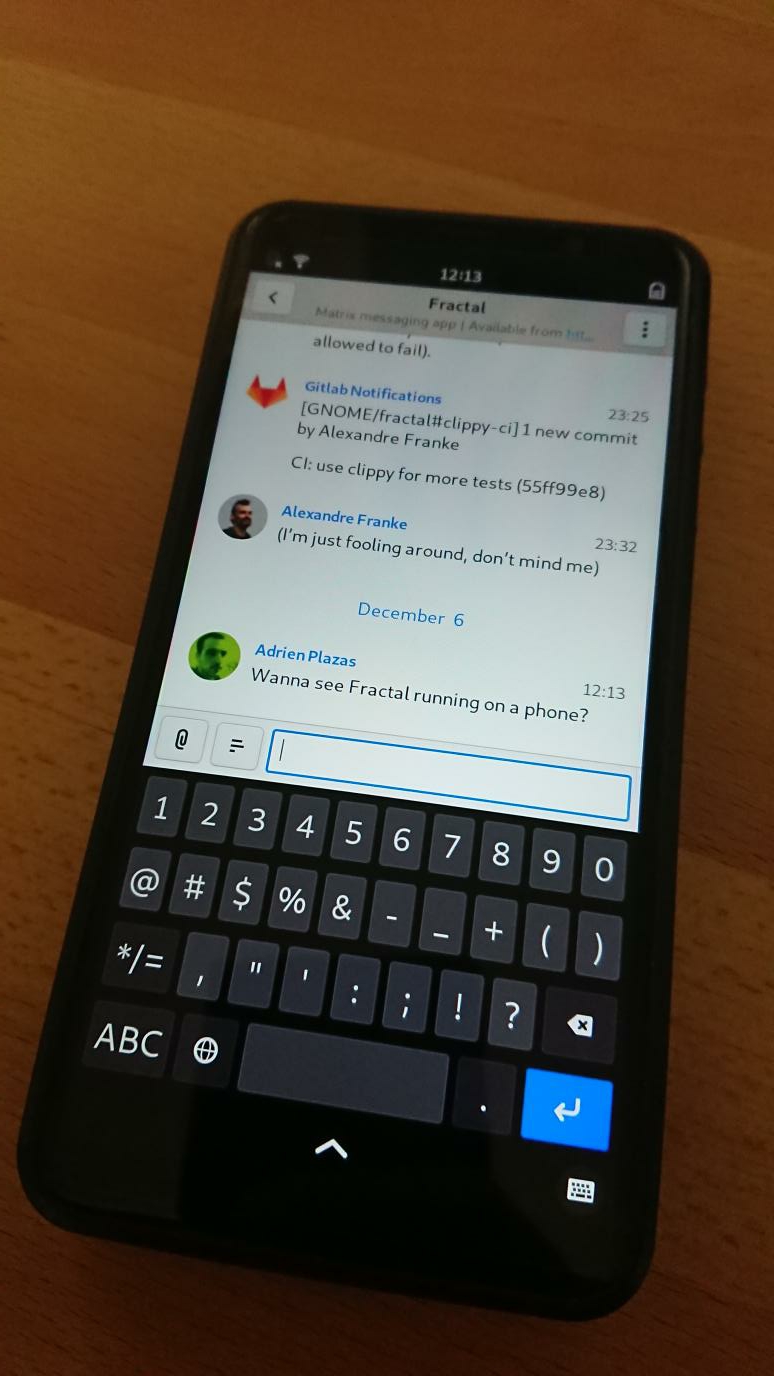 Nheko just merged support for encrypted files in e2ee chats. This allows you to send and receive encrypted files and even play videos and other media in the new timeline. Those changes are still on the development branch, but will be included in the next release, which should be 0.7.0. If you want to try it out, you can get development builds here.

koma, the Kotlin library behind the desktop client Continuum:

Released v0.9.1 on Thursday! This version includes a new login flow and account creation flow. Read marker has been reworked, to simplify user experience on mobile. Also you can type and send user pills.

We are now working on room and user profiles, and matrix.to link handling. Verification in DM development is progressing well. Also we implemented a first version of breadcrumbs, to switch between recent rooms very quickly.

Riot-iOS 0.10.3 is on its way to Apple review. The release note is: This release includes bug fixes and improvements, like:

let me share Messagerie: https://github.com/manuroe/messagerie, an iOS app and, maybe, in the future, a MacOS app.

Messagerie is a chat app written to test SwiftUI and Combine to make a real and, hopefully, useful app. Messagerie misses a lot of things but it has:

This is a personal and a side project, but RiotX-iOS will probably take benefit from it.

matrix-docker-ansible-deploy has been made more flexible in terms of how its services can be exposed to the web. Reverse-proxying using another local (in-machine or on-the-network) webserver should be easier. SSL-termination using Traefik is now also a possibility, although we're yet to confirm it as a success and document exactly how to do it. Read more in the CHANGELOG.

I created a dockerfile and corresponding docker image that can build the develop branch of riot-desktop for both windows and linux.

msc_resolver2 is back and now isn't annoying with all new features like:

It would be cool to be able to share location in Matrix rooms. This bot by cos solves the egg part in chicken and egg problem of having no clients able to send or receive location messages. Next we need a mobile client that can send location updates. Which one will be the first? https://github.com/vranki/malobot/

swedneck made a room for discussing how matrix could be used to implement forums: #matrix-forums:permaweb.io

Mathijs pointed out that there is a Matrix feature which enables spoilers.