We'd like to welcome Twitter to the world of decentralised communication protocols after Jack Dorsey's announcement this week that Twitter is building a decentralised social media team. It seems that the constraints they're working with are to focus on decentralised reputation (supporting different content filtering algorithms), incentive models (presumably some kind of token) and avoiding consensus-based standards processes. It's worth noting that we've been working on decentralised reputation stuff in Matrix for a while now - of which MSC2313 - Moderation policies as rooms is the most concrete result so far, and it's great to see Twitter thinking about how to adopted different filtering mechanisms for their content. It sounds as if they're approaching this from a blockchain/incentives angle however, so it remains to be seen whether they'll be interested in our work - especially as Matrix doesn't have a microblogging client yet (but only because nobody has made one yet). We'll be trying to talk to them whatever to see if we can be of use, eitherway :)

Here's your weekly update for what happened in spec land!

While it may look quiet from the state changes list, there's actually been a flurry of activity on MSC2376 and MSC2385 (for disabling URL previews on a per-message basis), MSC2380 (for a method of querying the metadata of a piece of media without downloading it) and MSC2346 (for showing metadata about the bridges that are currently active in the room)! Now's the time to jump in if you want to have your say!

The Spec Core Team is on the same track as last week with no specific 3 MSC focus, but working on bringing up a lot of MSCs across the board.

Synapse 1.7.0 is out, check out all the details here, admins can now specify message retention policies at a server and room level. We also changed the defaults for the room directory to be privacy preserving by default.

Next up we’re taking a look at support for redacting room alias events 1, 2 as well as porting Sydent to python 3.

We gained the ability to save spellcheck language per room, which makes me quite happy as I keep switching between English speaking and French speaking ones and was growing tired of those red underlines and having to switch manually every time.

Data is stored in /user/{}/rooms/{}/account_data/org.gnome.fractal.language.

Continuum, Kotlin client for the desktop: nheko mostly fixed bugs regarding the new file encryption this week and did some organizational stuff:

RiotX v0.10.0 has been released on Tuesday, with some bug fixes and a new Breadcrumbs drawer to switch between rooms super super fast. Give it a try! Now we are implementing workflow when the access token get invalidated, with SoftLogout support. Also, we are still working on improving the initial sync management, which can be a long task on big account, and that causes some problem with the current implementation. Among various other subjects: matrix.to support, room profile screen, verification in DM, cleanup dependencies to reach the F-Droid store, we are quite busy!

This week, we released Riot-iOS 0.10.4 with a couple of hot fixes on device verification. In parallel, we have been still working on verification by DM both on UI and SDK sides. As a collateral effect, the aggregation of m.reference has been implemented in the SDK. This means the SDK is now ready for message threading !

Cross-signing keys and secret storage can be created in Settings for advanced users with the cross-signing feature flag enabled in labs, though please keep in mind that these features are still in development. More work is still needed to change to verifying users instead of devices. More accessibility fixes have landed as well.

as part of all the work around cross-signing, we're shifting device verification to happen in the context of DMs so verification is done per-user rather than per-device, and so you can track your verification history and generally massively improve the UX. valere made a great video of how this is shaping up between RiotX and Riot/Web...

Check out the video here

ma1sd hotfix 2.2.1 released with a lot of bugfixes. Also the v2 API (MSC2140) was disabled by default because it breaks backward compatibility in lookup behaviour.

I have created a modular bot for writing Matrix bot functionality in Python easily. It already has bunch of modules ranging from weather to calendar integration and more will come. Even the location bot from last week's TWIM is now implemented as a module. I hope you find it useful. PR's of new modules are always welcome. https://github.com/vranki/hemppa

I've started a new project: mautrixfs is a Matrix client as a FUSE filesystem. It's very WIP and currently only supports reading events by ID. I'm hoping to have something more useful in a week or two.

for media uploads, I just realized that my asynchronous uploads MSC would make it significantly easier to implement. It could have a file you read to allocate a mxc uri and then you could simply write the data to the file corresponding to that mxc uri 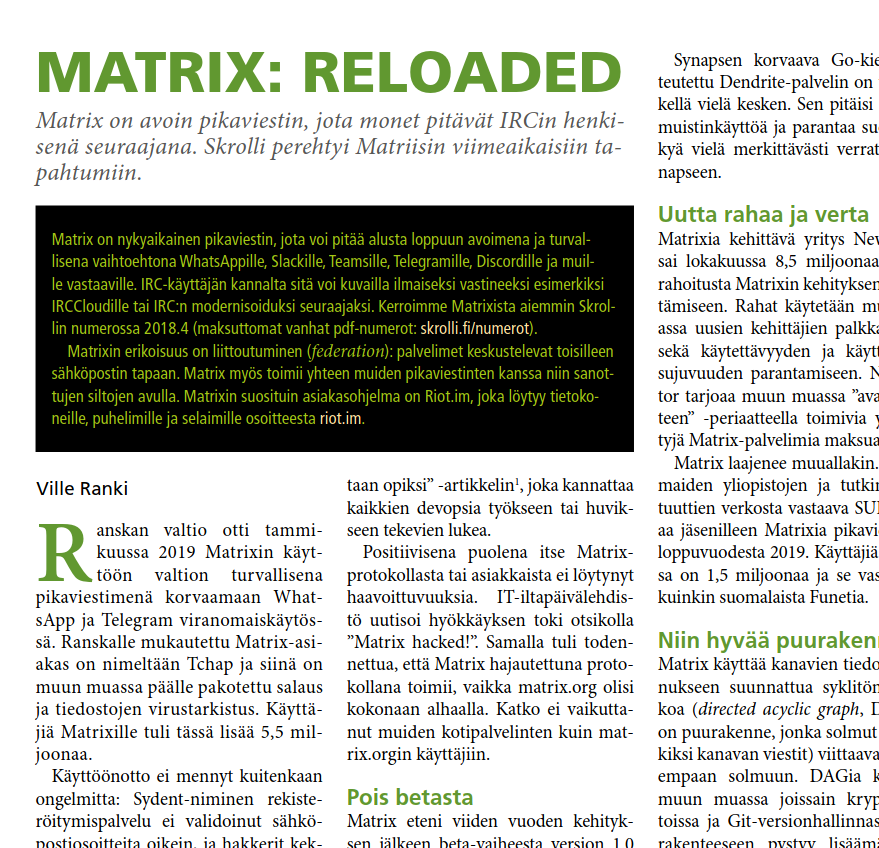