Sometimes it seems like existence is a constant loop. Cycles within cycles are replayed, with only minor differences to help us discern the current and the foregoing.
How can we endure it?

It's not all bad though! Google have announced the return of the Summer of Code programme, and have updated their website with the current year (2020) and latest information.

Matrix will be applying to be a Mentoring Organisation, as we have for several years now. This year, we'd like to open the umbrella a little. If you think your (Matrix-related) project could help mentor a student, and that you could offer a meaningful project to that student, please contact me directly. For reference, there were four students under the Matrix heading last year, of which one was assigned to work with Kitsune on encryption support in libQuotient.

Will you be at FOSDEM this year? Matrix will be very well represented, so please come and see us at our stand, plus attend all of the three talks we'll be conducting. Many more details to follow!

New from bit.nl, a public Matrix Homeserver focused on the Dutch market. Read the announcement and sign up here.

No MSCs were merged this week.

The Spec Core Team is still working on implementation, and likely will continue to be until after FOSDEM.

I've spent some time this week experimenting with integrating libp2p into dendrite and gomatrixserverlib to understand if we can get link-local homeserver discovery working along with direct or indirect federation. It's still early at the moment but I have had success with early federation requests working over libp2p—hopefully I'll have something interesting to show soon! 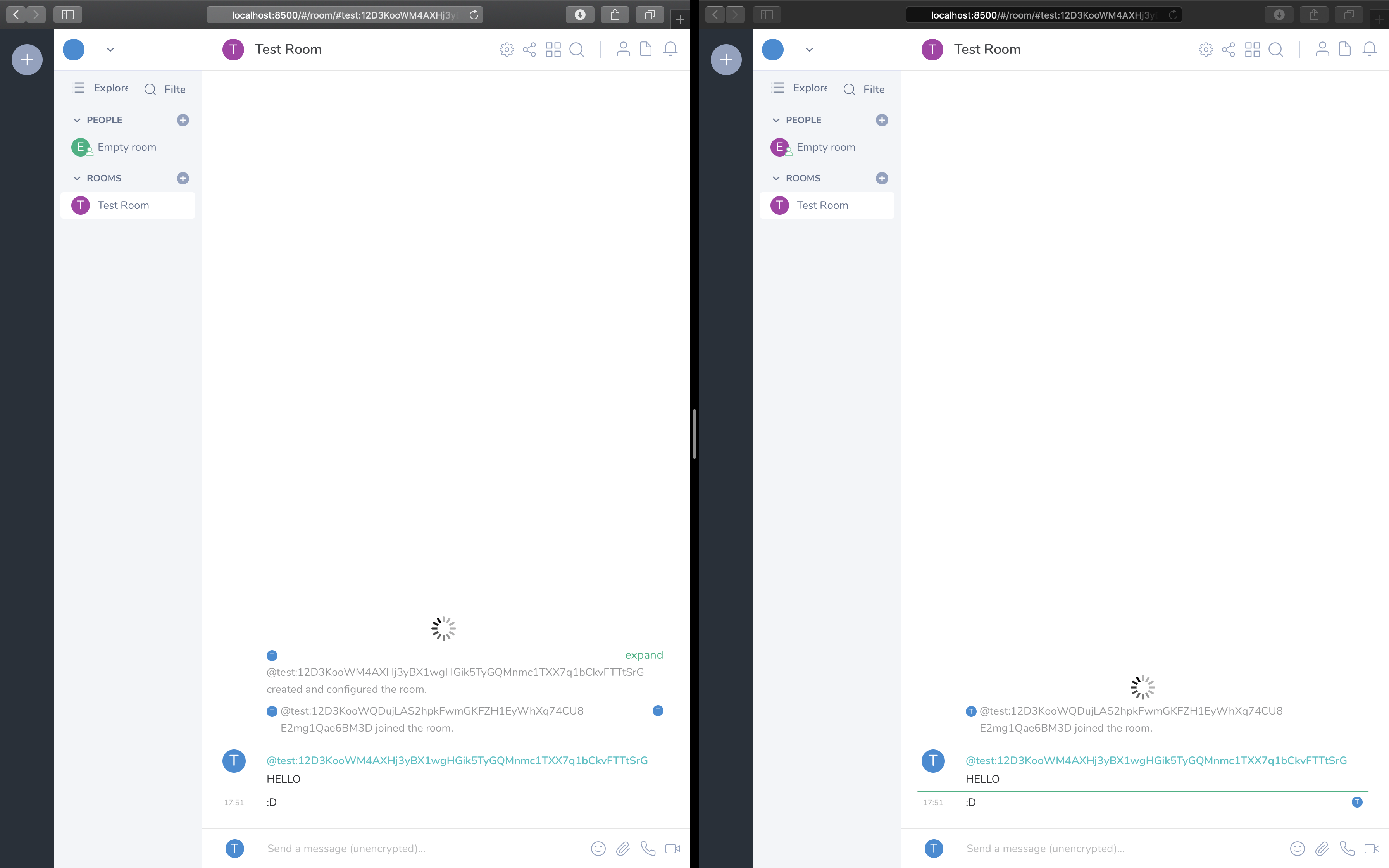 Dept of Built on Matrix 🏗

What is it? Slideshows in Matrix, basically using the matrix room / event primitives to construct presentable federated slide shows.

What's new this week you ask? Well, it breaks less. It also does other neat things.

Come check us out at #presents:half-shot.uk

matrix-imposter-bot - A bot that uses your account to repeat other people's messages. This gives relay-bot capabilities to puppet-only bridges. For more details, see https://github.com/mrjohnson22/matrix-imposter-bot

mx-puppet-bridge and other soru adventures

Will the development ever stop? Who knows! Here's the latest mx-puppet-bridge updates:

Of course mx-puppet-discord received some updates, too!

As always, if you have any questions, please drop by the support chat and consider to donate! 🦊🦊🦊

I added pretty rendering of replies to nheko. It uses the same rendering as for normal messages, so you will see an image being replied to and you can even play a replied to video. You can also click on the reply to navigate to that part of the history.

RiotX: Release v0.13.0 has been uploaded today to the PlayStore and should follow in F-Droid store. It contains typing notification feature, and new screens for Room profile and room members list, and new screen for Room Member profile. Those new screens are still missing a lots of features, that will be implemented in the next weeks. For F-Droid version, it contains a fix on the broken background sync. We are also making big progress on cross-signing implementation, and we have started to write integration tests on the SDK.

We are still working hard on the implementation of cross-signing.

Thanks to Ryan from the team:

All of this is part of cross-signing:

In the past month, a few things happened:

Continuum desktop client based on Koma:

matrix-docker-ansible-deploy can now easily configure automatic Double Puppeting for all of its Mautrix bridges (Facebook, Hangouts, Whatsapp, Telegram). This is possible due to those bridges' integration with matrix-synapse-shared-secret-auth - yet another component that the playbook can install. Our documentation page for each bridge provides relevant information on how to get it enabled.

matrix-docker-ansible-deploy can now install and configure matrix-appservice-webhooks, thanks to a contribution from Björn Marten from netresearch. Our documentation page about Appservice Webhooks tells you how to get started.

I have created simple Bash script for auto-update Riot-Web to latest version. Because https://github.com/vector-im/riot-web now have no public Wiki, I publish it as Gist here: https://gist.github.com/MurzNN/ee64f98ab2e71b886c41d55594e5dd9e

My Grafana notification ingress gem received the missing piece of functionality for configuring it for posting both m.text as well as the original m.notice messages (as well as defaulting to m.text now as the more common expectation) - for those that want the messages to also provide Matrix notifications instead of just acting as an added history/flow. This can also be configured per-rule, so that you are able to have multiple notification ingresses configured with different message types.

It's always so lovely when people - other than myself - use my projects, especially when providing feedback on them. So many simple-to-implement features that get forgotten just because they weren't part of the original MVP.

TWIM bot has been updates to use all the new features of opsdroid 0.17 it now supports Edits, both in updating it's database and by editing messages which get posted to #twim_updates:cadair.com . Also it supports 'TWIMing' a post by the user who posted it reacting with ⭕️, this is mainly designed as an easy way to mark images as TWIM posts. 🚀