Half-Shot talks to Neil about his new(ish) project, matrix-presents

Here are your spec updates for this week!

The Spec Core Team is still working on implementation, and likely will continue to be until after FOSDEM.

A fairly big PR was merged into Dendrite yesterday (and some more fixes today) which gets /sync working better and adds the /messages endpoint, so it's now actually possible to paginate around in channels and to see room history. This massively improves the user experience when logging into a Dendrite homeserver.

In addition, another small PR was merged to fix Riot user login in the normal login workflow (not registration) and the public rooms API has been wired up for roomserver events.

A couple of changes have also been merged into gomatrixserverlib, mostly fixing the creation of /backfill requests and allowing the use of custom http.Transports for federation traffic.

This week we shipped 1.9.0 which contained new admin API endpoints as well as bug fixes for existing ones. Aside from that, we’ve been continuing on our E2EE UX bug hunt and python3ing sydent.

Next week, we’ll keep going on the e2ee ux bug hunt and sydent work. As well as dusting off MSCs 2260 2261 to improve room aliases management.

Hello wannabe IRC and Matrix users! Today the bridge team bring you the 0.14.X series of the irc bridge. This is the mammoth release featuring all the Typescript changes and postgres stuff. The Postgres changes aren't as essential as they are for Synapse, but useful if you run a ~20k Freenode bridge.

Some of these features are still more experimental than others, so the next release hopes to clean up a lot of the outstanding bugs. That's all from us for now :)

As always, feel free to drop by the support room and please consider to donate!

Always wanted to host your own version of Riot Web locally but never came around doing it? Meet Riot WebExt, an unofficial proof of concept Browser Extension that bundles Riot Web, so everything is locally served with the click of a button. Available for Firefox and Chrome!

Ditto Chat is a Matrix Client in React Native.

Continuum desktop client based on Koma:

FluffyChat-Flutter is now available as a web app!

Check it out at: https://christianpauly.gitlab.io/fluffychat-flutter/

It includes everything that the Android App does except for currently notifications and file sharing. 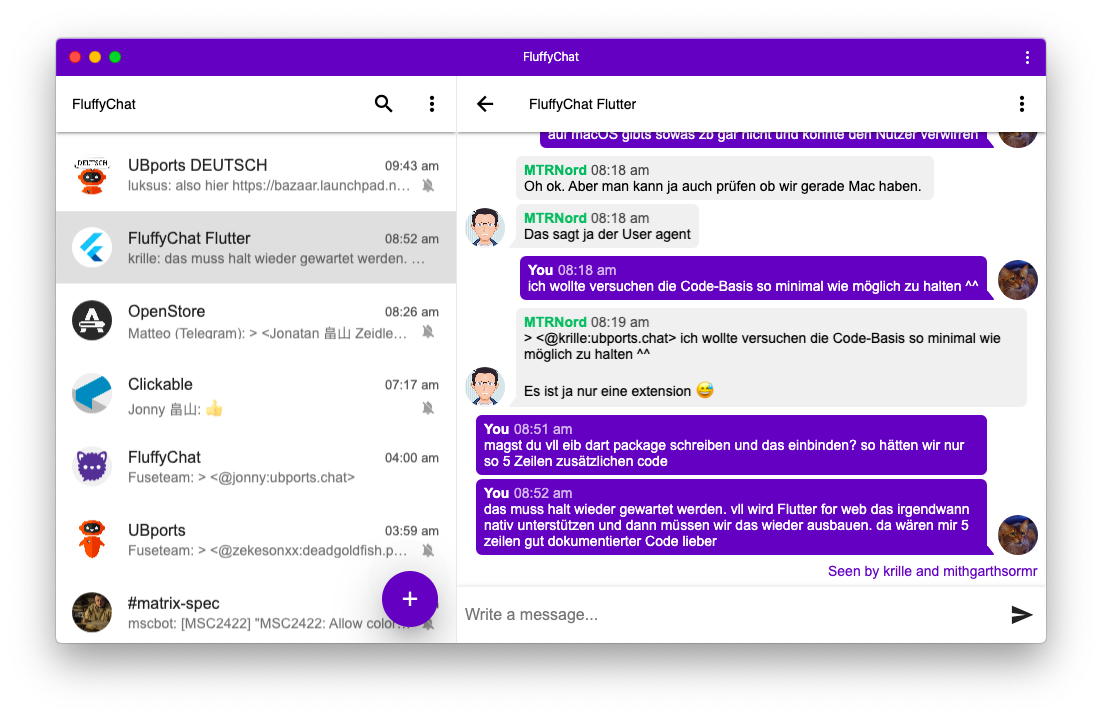 This week, in the cross-signing side, we updated e2e decoration, replacing padlocks with shields. We started working on the new device list in the room member screen.

RiotX, rainbows and other new features

RiotX: We are making progress on cross-signing and verification by QRCode. Also we are working to improve the network detection and paused sync thread issue. But the most important is: "/rainbow" command will be available soon 🌈 !

We've done a lot this week, and probably even more next week:

tsw from Tampere Hacklab has made a read-only client for information displays. It's still in early development but can already be tried out. https://github.com/tswfi/matrix-viewer/ 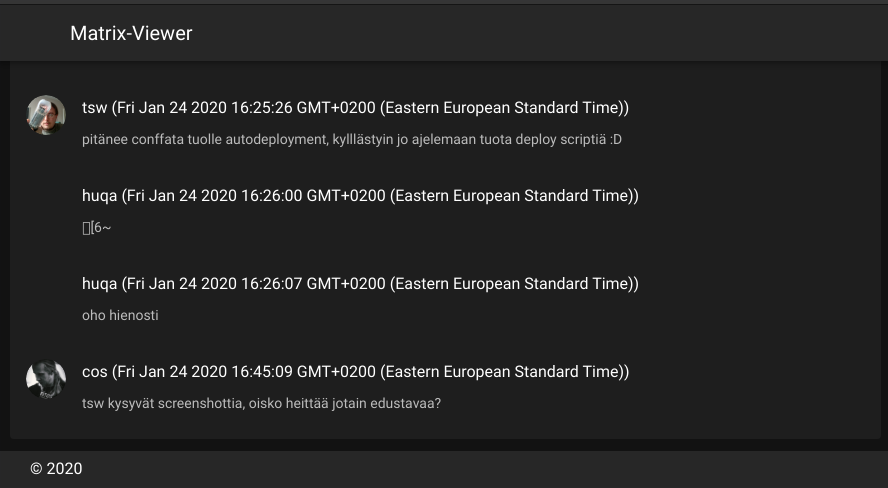 Are there any French speaking Sys Admins reading this? If that's you then I want you to know that https://apply.workable.com/new-vector/j/766008FB0D/ exists and if you are interested to know more you should DM me. Remote is fine - though full time only.