You will know Matrix Live as a weekly video produced by the Matrix team and shared on YouTube. We are now offering the same content as an audio-only podcast, as a way of reaching more people. You can find the podcast:

Are you interested in a real-life, real-time Matrix-related meetup? Can you make it to London? Join us on the 26th February at Second Home in Spitalfields! More details to follow, for now please register your interest at https://www.eventbrite.com/e/matrix-london-meetup-26th-february-2020-tickets-93320354693.

No FCPs have entered Final Comment Period this week.

I (anoa) am still working on the re-write of mscbot. Only needs a few more touches (concern parsing [in comment threads!] and review commands) before it's ready for use.

In Synapse land this week we shipped 1.10.0. Which contains a temporary hack to mitigate room alias abuse and an important bug fix for anyone trialling cross signing.

Aside from that we’re working on fixing alias abuse properly. Improving User Interactive Auth for SSO customers and rolled out our new py3 compatible sydent version.

Coming up, more e2ee UX bug fixing, and we’ll start hacking on sharding out event persistence on Synapse’s master process, which basically accounts for 40% of the CPU. The idea is to scale this function horizontally such that Matrix.org is no longer CPU bound after which point much rejoicing can occur.

Just pushed the 1.10.0 K8s-optimized images for Synapse, this release contains the necessary scripts to also run signing key generation and upload as a step towards one-click install support for Synapse without any requirements on storage classes.

Hey! This week we have a minor release for the IRC bridge, 0.15.2. It contains a few fixes that have been plaguing the matrix.org instances, and will hopefully smooth out some of the reconnection troubles.

Notes from the changelog:

Fresh off the heels of FOSDEM, we've been working on making Bifrost a smoother experience for our XMPP friends.

contains quite the bundle of features and fixes. The bridge is now running on matrix.org, if you didn't hear the

Iam happy to announce some of the new features the Matrix-EmailBridge got recently. It's been some time since the last update came out because I had some other projects to do first.

A new Android developer joined the RiotX team! Onuray has started working on Monday on issues and features to get used to the codebase and the process in place.
We are currently preparing a release (v0.16.0) which contains a first implementation of poll (here is a demo), and some bugfixes.
We are still working on stabilizing the cross-signing feature, and optimizing the overall performance and stability of the application. 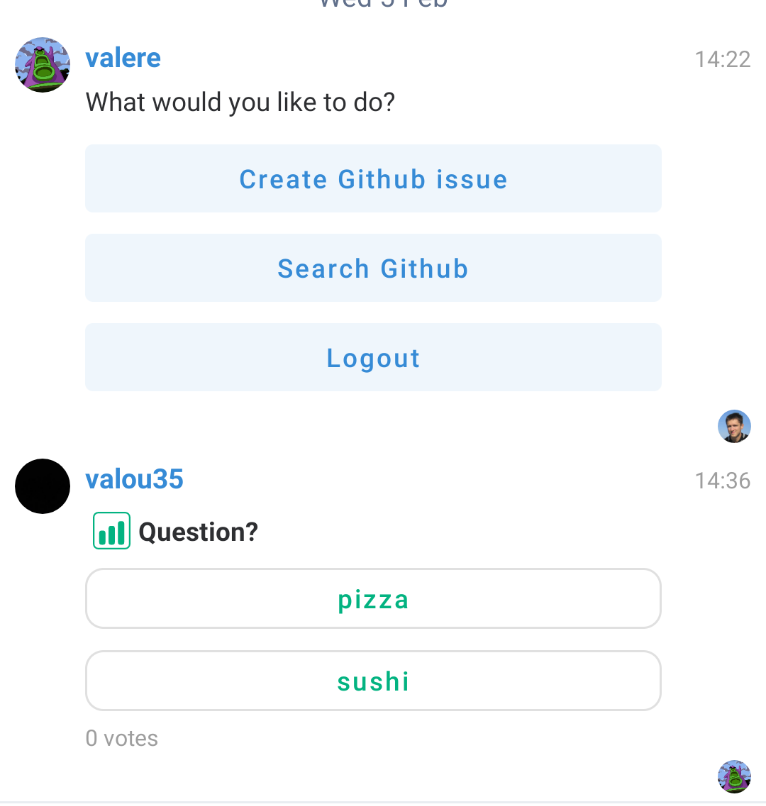 If you're looking forward to using seshat to index and search your encrypted message history, you may be interested in this work from stoic. The working title is "Riot Booster Pack" - but we're looking out for a better name!

Searching in encrypted rooms in the browser would be nice? I agree, so that's something I'm working on (powered by seshat). If you want to give it an early experimental spin, beware of the dragons and follow these secret steps (Riot Firefox Add-on + Linux & MacOS only, for now):

We have been spending most of our time on cross-signing to manage the m.verification.ready event and the verification by QR code. In parallel, we have fixed some issues and merged some PRs from the community.

Cadair and me (the Matrix Doctors) have been working to make it easy to build the development version of riot-desktop. This resulted in a docker container and an azure pipeline. The latter also builds riot-desktop versions with seshat included for both linux and macOS though currently this requires manually installing sqlcipher (use brew on macOS). 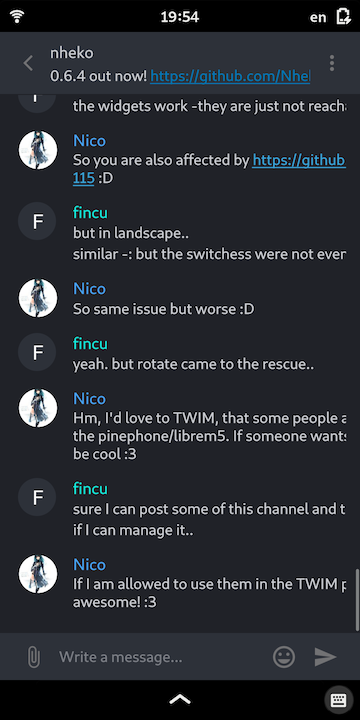 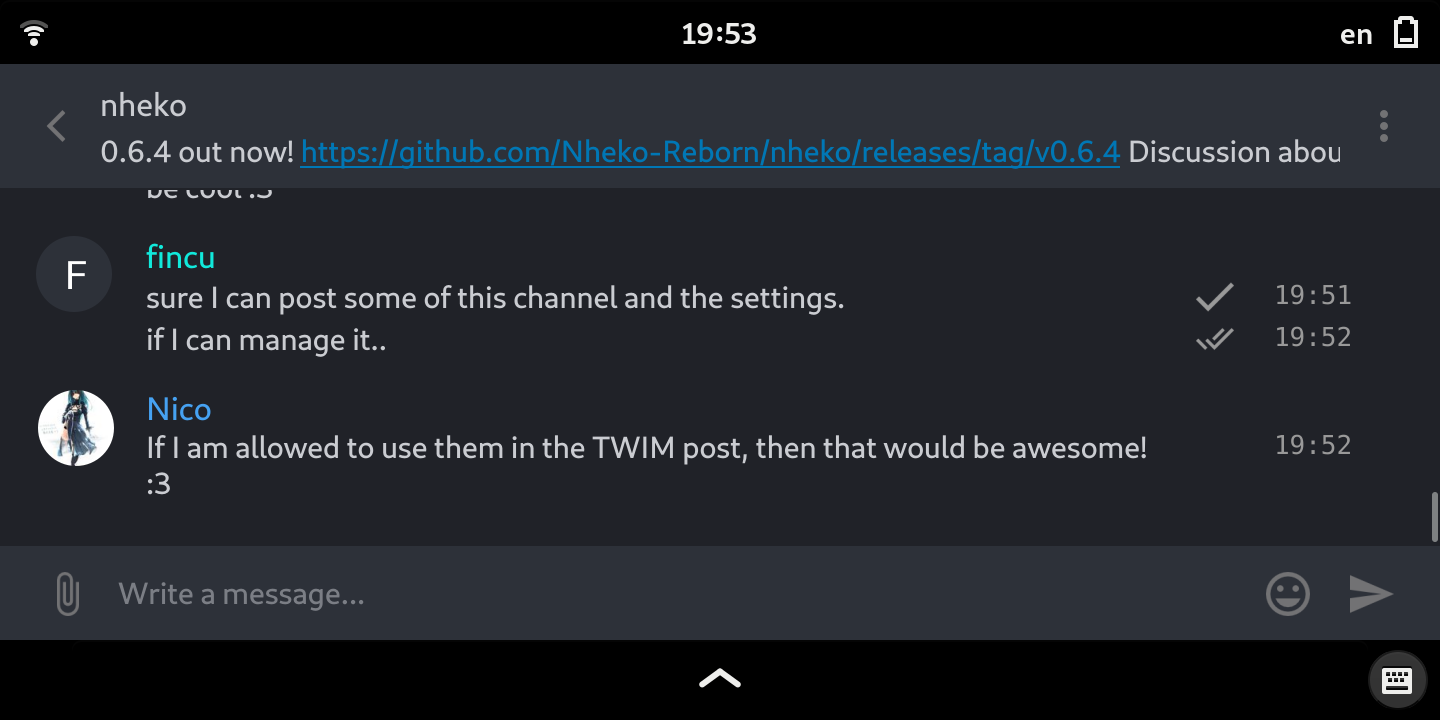 I'm going to finish the implementation of end to end encryption in our new Famedly Dart SDK. Here is a little preview:

matrix-bot-sdk has just released v0.5.0 which includes some new helper functions, async storage providers, and a new SynchronousMatrixClient for when you really need things to happen in a specific order. Check out the diff here: https://github.com/turt2live/matrix-bot-sdk/compare/v0.4.1...v0.5.0

Just pushed version 2.0(.0) of the Ruby SDK, coming with a few backwards-incompatible changes as well as a whole bunch more endpoints exposed as methods on the low-level API client. Docs have been improved tremendously, some internal methods have been properly exposed to make it easier to use in a bot context, and another example's now provided which shows a different way to use the higher-level Client abstraction.

After entirely too much time, I finally present my 5 new and improved matrix ansible modules.

The work on this also included sending a few patches upstream to matrix-nio, so if you want to use the last two modules, you will need to install nio from source from my PR there.

Get the modules now from https://gitlab.com/famedly/ansible/modules/matrix!

This one is a little meta: I've made some improvements to twim-o-matic, the tooling I use to generate TWIM. One of the improvements is that the bot will now sort the output per-section, in descending order of how many reactions the entry received when posted in #twim:matrix.org. So, if you see something you think should be at the top, made sure to react to it!

Even as I'm typing right now I can't think this will lead to any unforeseen consequences at all.

I coded up this real complicated bot... very different from the cat one. HTTP dogs! 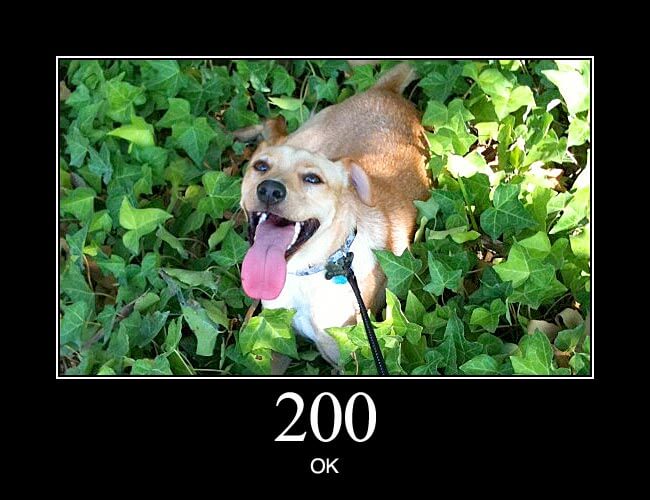 German Blog basicthinking.de posted the article, which compares Riot to WhatsApp completely missing the point of the [matrix] network.