Wise Google have again selected Matrix as a GSOC Mentor Organisation. Matrix has been successful with GSOC for several years now, so please think about what you'd like to work on, get involved with suggested projects, and join #gsoc:matrix.org for more insights.

If you have a Matrix project of your own, and think that you would benefit from mentoring a GSOC student, then let me know. We are very happy to have Matrix-related students working on your project under the Matrix umbrella. (Just like we did with kitsune last year.)

It's happening Next Week!!

Are you interested in a real-life, real-time Matrix-related meetup? Can you make it to London? Join us on the 26th February at Second Home in Spitalfields! Check out the agenda and register at https://www.eventbrite.com/e/matrix-london-meetup-26th-february-2020-tickets-93320354693.

The section where I talk about mscbot 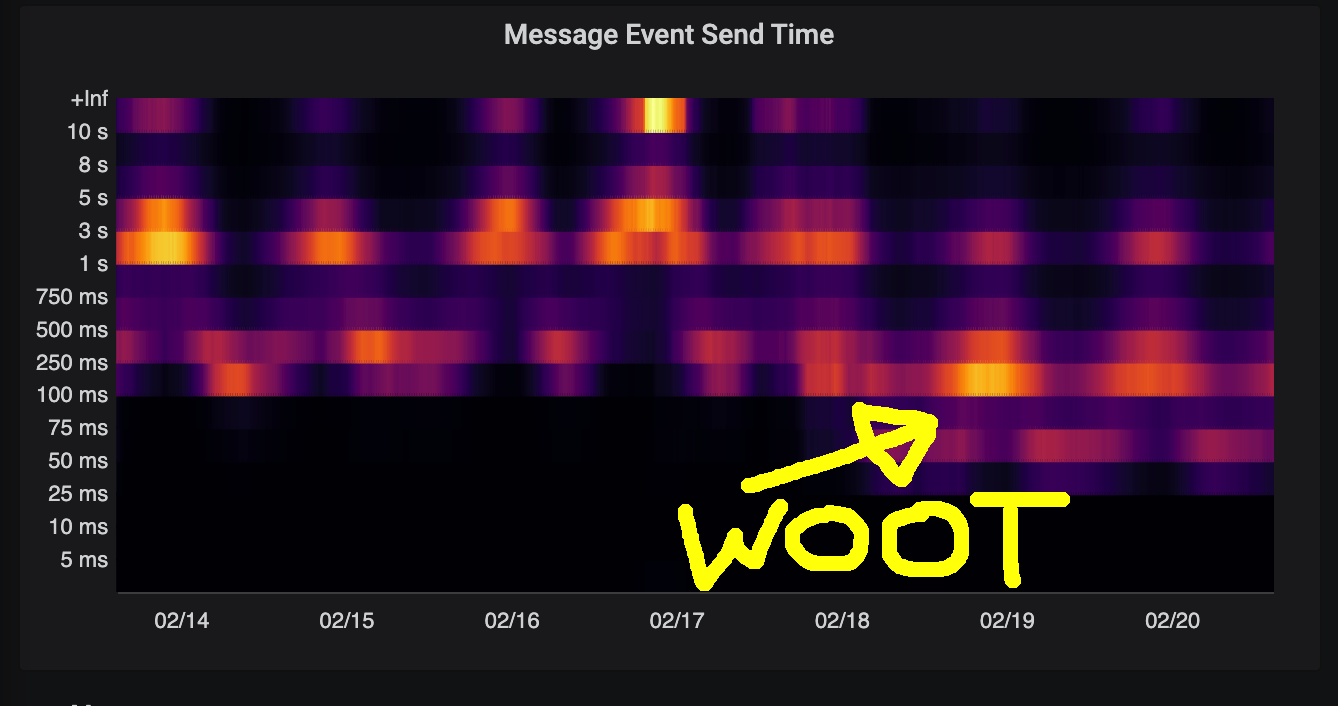 More excitingly we’re working on sharding out the master process in Synapse, so that worker based installations can scale more efficiently.

Next week it’s all about more alias abuse mitigations, fixing some SSO/User Interactive Auth bugs and continuing with our performance work.

Just pushed version 1.11.0 of the K8s-optimized Synapse images, find them on dockerhub as ananace/matrix-synapse

Hola. I wrote the matrix-github bridge a while back to support bridging issues and pullrequests into Matrix as rooms, so that the history of an issue can be tracked within a room, and users can comment on them within Matrix. As of today, you can now bridge in your own notifications into Matrix. It's early days, but is actually proving to be useful.

More news! This week matrix-appservice-slack has reached 1.1.0-rc1 and included is a whole bunch of puppeting and membership sync features. The headline features are:

mx-puppet-bridge now automatically stops typing indicators for a specific ghost if the remote protocol sends out a message as it.

gomuks now does single sign-on, which means you can log into mozilla matrix accounts with it.

Check the docs for information on how to add SSO to your Matrix client.

In addition to the SSO support mentioned earlier, gomuks now has initial support for rendering reactions and full support for edits (both sending and rendering). Some bugs have also been added and/or fixed.

I'm curious how you got seshat working in a browser, considering wasm doesn't have support for multi-threading?

it's not actually running in the browser, it uses native messaging to spawn a local rust binary and talk to it over stdio poljar did a great job with seshat, so it wasn't much left for me to do 👌

I made a place where you can post Riot Web themes https://github.com/aaronraimist/riot-web-themes

RiotX: this has been a good week on RiotX. We are making progress on cross-signing and SSSS implementation. We are fixing many small annoying issues and also starting to implement little missing features to improve users' life! The big next coming feature is improvement of attachment and share to RiotX flow, already merged in the develop branch, so available in the next release.

Regarding "SSSS", uhoreg helpfully links us to https://github.com/matrix-org/matrix-doc/pull/1946, and also added:

(I usually expand SSSS to "Secure Storage Something Something")

This week a pull request has been pushed to integrate directly the SQL persistence backend inside the SDK, using Moor instead of sqflite. The code is smaller and a lot more readable, and it opens some nice perspectives: Moor has a web backend using sql.js, and now uses FFI by default instead of iOS/Android bindings, which should be faster (untested). https://git.pattle.im/MatMaul/matrix-dart-sdk/tree/moor

I just updated my python library, simplematrixlib, as well as py-matrix-utils, adding the ability to upload files.

Another set of new crates have been released:

ruma-client-api is also continually being worked on to bring us up to date with r0.6.0 (thanks iinuwa!), but no new release was made this week.

I made a small utility Bot which allows you to redirect people that send messages to one of your "wrong" accounts to your "real" account.

It currently does join on invite, invites your "real" account and sends a customizable message.

It does also support listening to multiple accounts or Homeservers.

If you were in #twim:matrix.org this week you may have seen that the most popular bot was "Dad Bot"...

I made Dad Bot for Matrix which mocks users who use "i'm" or "im" in their sentences.

DadBot 2.0.0 is already here! With the quick feedback given by the community I added all the features

What's in the works:

I opened a room for discussions about dad bot if you want to send feedback there. #dadbot:m.dhdf.dev

I got my first silly matrix bot running last evening. It is a lightweight reminder bot. The source is over there: https://git.sr.ht/~rumpelsepp/remindbot