This week Matrix held a Meetup Event in London! There were presentations demonstrating E2E Cross-Signing (including the next, sleeker QR codes), P2P in the browser with Dendrite, Message retention, and Github bridging. There was also plenty of P2E* and B2D**.

You can catch up on what was missed by watching this week's Matrix Live (below), or check out the full event playlist, particularly the P2P with Dendrite demo.

Hi TWIM, I don't know if you've noted this yet, but I got my company to interview Matthew and Amandine on their podcast: https://www.version1.com/one-zero-one/matrix-org/. Éibhear

Reminder that Matrix Live is also available as an audio-only podcast. You can find the it:

Last week we announced that Google had selected Matrix for the Google Summer of Code progamme, and requested projects get involved under the Matrix banner. We had a great response to this call: Ditto, Ruma, opsdroid and Nheko are all offering projects this year, as well as projects under the core Matrix team.

We updated suggested projects list (more to come), so if you're a student please take a look. Think about what you'd like to work on, get involved with suggested projects, and join #gsoc:matrix.org to discuss.

The biggest changes in this release are the privacy improvements we've worked on last year, along with Python 3 support and improved documentation.

More details can be found in the full changelog, and folks can get their hands on this new version from PyPI or from GitHub 🙂

matrix-media-repo got a v1.0.1 patch release to fix a memory leak. Downloads and the very small changelog available at https://github.com/turt2live/matrix-media-repo/releases/tag/v1.0.1

Matrixmon, the perl based c2s probe with metrics to track your Synapse server client API responses is now at v0.5.0 and now allows using an access_token for the probe user.

This week Erik been tackling the work on sharding the master process in Synapse, Patrick has been working on the new room alias semantics while richvdh has been doing some background preparation to allow us to change the way events are redacted in future room versions.

Next week: SSO/User Interactive auth is still in the pipeline, alongside an option to allow users to change their password without logging out their other devices, and of course, more sharding.

arm64 support for all Tulir-projects:

The docker images of my projects (specifically mautrix-{telegram,whatsapp,facebook,hangouts} bridges, maubot and mautrix-manager) now support arm64 in addition to amd64. They're multiarch images, so the same tag will work with both architectures.

nheko-reborn is now available on the guix package manager! Guix feature reproducible builds, allowing users to verify the binary cache correctness, and the possibility to create tarball/docker images to easily share the build results with all dependencies to systems without guix package manager.

Guix also aims at reducing bootstrap binaries to a minimum (see this blog post for example), reducing the effect of trusting trust attacks. Those properties led guix to be the package manager of choice for bitcoin development.

I made a place where you can post Riot Web themes https://github.com/aaronraimist/riot-web-themes

Which like the flap of a butterfly wing has caused a series of events:

A Nord Theme for Riot!

If you have your own build of riot-web you can simply modify the config.json and add this theme to it!

If you have your own build of riot-web you can simply modify the config.json and add this theme to it! 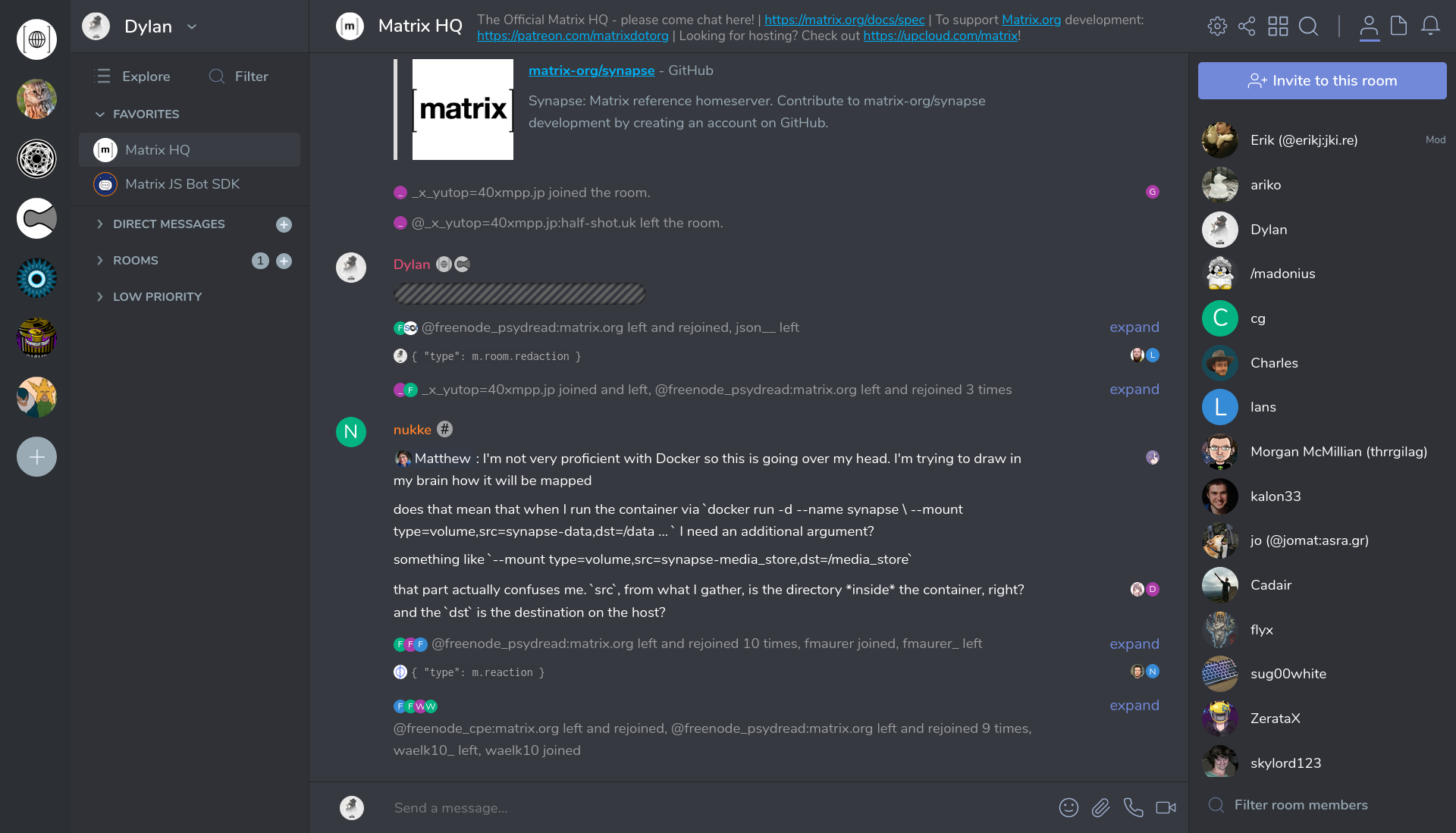 matrix-docker-ansible-deploy now makes it easy to install custom riot-web themes, either by having you manually define them or by automatically pulling whatever themes are available in aaronraimist/riot-web-themes. To learn more, take a look at our riot-web documentation on Themes.

Our current Outreachy intern implemented many nice media related things. Videos now have a preview playing directly in the room history and clicking on them opens a player view with the usual controls.

Audio messages have a nicer presentation too. The audio player downloads the whole file to make seeking possible.

The narrow view (used e.g. on the Pinephone and Librem 5) gained a new swipe-back gesture to go back from room to room list

gomuks now has support for lazy-loading room members, which might mean that small servers won't explode when gomuks does an initial sync.

RiotX: We have released version 0.17.0: new attachment management, with media preview and edition. This release also contains a lot of bug fixes. We are also still working on cross-signing implementation.

This week we continued to implement verification by QR code at application and SDK level.

...is a template repo based on the matrix-nio library that you can use to get quickly up and running with making simple, yet powerful matrix bots in Python!

🔒️ Encryption Support is now built-in 🎉! This does shift the login model from access token to username/password. Note that by entering a device id however, you won't be creating a new device every time you start up the bot!

Thanks to alturiak for motivating me to make these changes :)

If you have any questions, please join our support chat and maybe consider to donate. Thank you!

tulir made a PR for custom provisioning API endpoints. It is already merged. Thanks a lot!

mx-puppet-tox is finally functional again! It is updated to the latest mx-puppet-bridge library, giving it all the new features. Yay!

Hemppa the bot gained ability to run shell commands via Matrix. It's a small feature but enables a lot of possibilities in system management and monitoring, home automation, and whatever you can do in linux shell. As an example project I plan to use it for running a script to open hackerspace door with Raspberry Pi's GPIO if sender is a member. https://github.com/vranki/hemppa

remindbot got support for reacting when mentioned. This allows the bot to be used in rooms with more than 2 participants. The timespec got a minor update, supporting now the variant tomorrow HH:MM. Furthermore, the bot now sends a reaction when a notification has been scheduled instead of a noisy message.