matrix-media-repo has early support for IPFS! Currently it's only gateway support, but in the coming days it should be possible to also upload into the IPFS world. See https://github.com/turt2live/matrix-media-repo/issues/115#issuecomment-593772429 for details.

A busy week in Synapse this week! We've released Synapse 1.11.1 to fix a security problem with single-sign-on, Patrick has been putting the finishing touches to the room-alias-spam mitigation measures in MSC2432, and Erik has been doing some exciting work in replacing the inter-process replication protocol for worker-based deployments.

We've also started the design work on single-sign-on support for user-interactive-auth, which we'll be starting implementation work on next week.

I finally remembered to update my multi arch synapse docker image to 1.11.0. Now with more architectures!

Send notifications from Icinga(1,2) to a Matrix room.

mx-puppet-slack supports xoxc tokens now! That means you are able to bridge slack workspaces without the need of legacy tokens or oauth - no permission from the workspace admins are required for those!

There is a simple Mumble-Matrix Bridge available.

A simple Matrix to Mumble bridge. It sends messages between bridged rooms and tells you when people join / leave Murmur.

Written in TypeScript and based on matrix-appservice-bridge.

Hello again, I made a public room at #mumble-bridge:evermiss.net

Ditto is a user-friendly Matrix client for iOS and Android.

In general, we'll welcome any help if someone would like to contribute - great way to get some experience with React Native! Just reach out!

If anybody has the skill set or interest, we are also looking at creating a React Native specific Matrix SDK to improve performance and allow others to develop RN clients easily.

We have fixed several errors on file and media sending/downloading/sharing. Also we are still working on cross-signing and e2e stabilization.

Riot-iOS: We have fixed an issue with push notifications but we are still investigating rageshake logs before doing the release. In parallel, we are still working on cross-signing: QR code and Secret Sharing.

Selenized Light, Dark, and Black for Riot! If you have your own build of riot-web you can simply modify the config.json and add this theme to it! 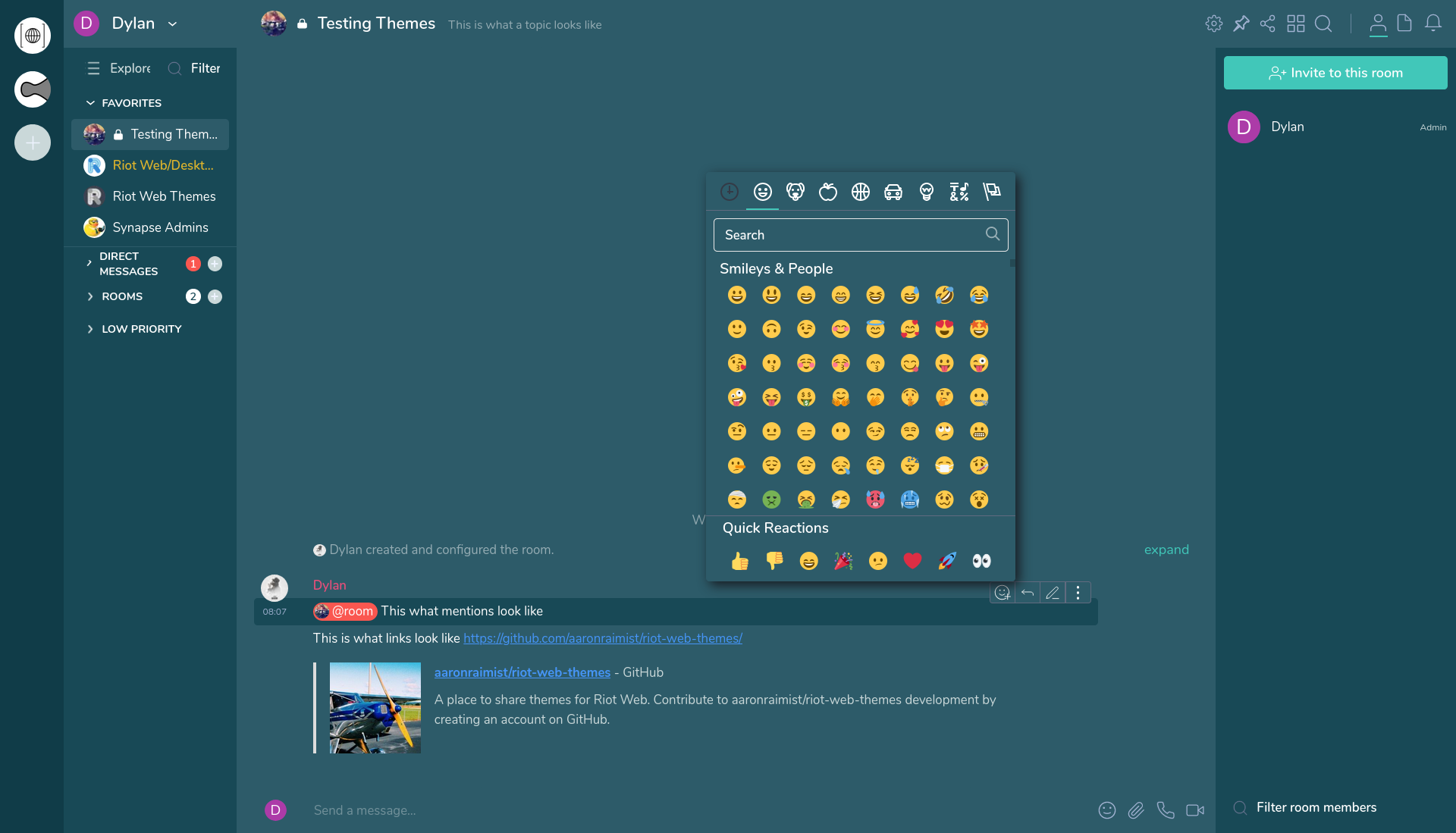 Nord Light Theme for Riot is also available from Dylan:

If you use https://github.com/spantaleev/matrix-docker-ansible-deploy/ it will automatically download and install all of the themes just by setting matrix_riot_web_themes_enabled: true

i have updated simplematrixlib and py-matrix-utils adding (among other things) the ability to upload and download media, and send messages! Simplematrixlib is available on PyPi.

Another image bump, this time to 1.11.1 The accompanying Helm chart I've been writing has sadly gotten rather delayed due to prioritisations at work, so might be a bit until then.

During last hackweek, I wrote a chat bot integration in Rust for openSUSEs Open Build Service. OBS is used for development of the openSUSE distribution and can build packages from the same sources for Fedora, Debian, Ubuntu, SUSE Linux Enterprise and other distributions.

The bot follows given packages and pull requests and pings a room if any changes occur (build finished, PR got commented or accepted, ..).

Sources can be found here, RPMs exist as well.

Unfortunately, there still are bugs. Sorry ;(

Isabella the Monero Girl is a fun sticker pack made by Cypher Stack designed to be cute, fun, and used by anyone. We hope you enjoy emoting with Isabella.

We'll have a cool image and more info next week.

also working on mautrix-manager, although I'm not sure if/when that'll be ready for general usage