Some snapshots of what the team has been working on. Look out for a clear explanation from Erik about Synapse performance (and what will be done about it!), and lots of other goodies

Rescue18 (a French non-governmental news website for emergency services) echoed this announcement earlier this month, praising the security aspect of the platform and the possibility it offers to improve social and professional exchanges throughout the hierarchy as well as the rest of the government and public services.

Article is all in some other language - thanks Brendan for providing this summary.

Well, MSC2457 should be. It's waiting for a redeployment of mscbot.

matrix-corporal manages your Matrix server according to a configuration policy

matrix-corporal v1.9.0 has been released. It adds support for preventing certain users from creating rooms (that is, from using the /createRoom API). I've been thinking about developing this feature for a while now, as people have been requesting it frequently.

v1.1.2 is out with a bunch of fixes to the Docker image. Check out https://github.com/turt2live/matrix-media-repo/releases/tag/v1.1.2 for details, and #media-repo:t2bot.io for support.

This week I worked a lot on getting the first bit of federation working. My goal was to query the public room list of another server and forward it to a client.

This involved setting up a keypair to sign the json I send to the server and putting authorization headers into my requests. Most of the work is already done and https://federationtester.matrix.org/ reports it's all good. 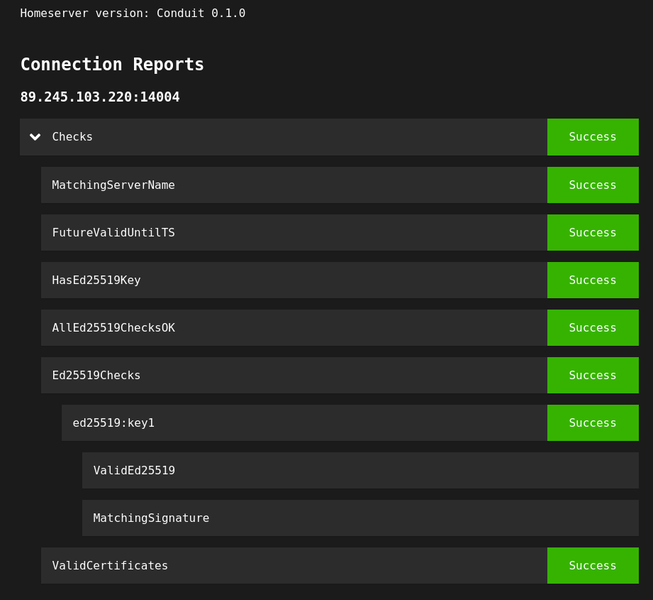 Sadly there seems to be a problem with the signing, because other homeservers reject requests: Unable to verify signature: <class 'nacl.exceptions.BadSignatureError'> Signature was forged or corrupt. I'll continue to work on this in the next week(s).

A bit late to the party - was rebuilding my cluster at home to EL8 - but pushed the Kubernetes-optimized docker images for Synapse 1.12.4

The image for synapse v1.12.4 including jemalloc and mjolnir anti-spam has been released to avhost/docker-matrix:v1.12.4.

Matrix native integration for the Sailfish OS, KDE and other linux systems called telepathy-tank got attertion from the community this week and @aa13q updated it a bit thanks to @Kaffeine. Writing the post for the TWIM has grown into the small blog post, so @aa13q shared it sepatetely: https://hackmd.io/@aa13q/telepathy-tank

Nheko released two new version, 0.7.0 and 0.7.1. The second one mostly fixes some minor issues in the 0.7.0 release, which we got from all the people trying it out. Thanks for reporting them!

Since 0.7.0 is pretty big, please read the release notes on github: https://github.com/Nheko-Reborn/nheko/releases/tag/v0.7.0

Some of the highlights:

You can get the latest release on github or maybe someone actually packaged it already for your distro.

We hope you will try it out and have a good experience! If you don't, you can complain to us in #nheko-reborn:matrix.org or open an issue in our bugtracker.

gomuks got a fancy initial sync loading bar so it no longer looks like it's broken after you log in. Implementing end-to-end encryption in mautrix-go has also been slowly progressing, might have something working in a few weeks.

A glossy Matrix collaboration client for the web. https://riot.im

This week we released a fourth RC for Riot Web 1.6, the upcoming release with cross-signing, addressing a few issues found through everyone's testing and feedback. Please do continue to test https://riot.im/develop, the latest RiotX build, and also E2EE search in Riot Desktop Nightly.

I created an client-sdk to interact with matrix in Spring Boot. It is written in kotlin and should also work with Java. You can find the repo here: https://github.com/benkuly/matrix-spring-boot-sdk

It contains also a bot-sdk to write bots by adding a dependency and a few lines of code only. It is tested with unit-tests, but integration-tests against a real matrix-server are currently missing. A simple ping bot works and is also integrated in the repo as example.

Currently I'm working on getting this to Maven Central.

Thanks to Rodrigo Belem's efforts, matrix-docker-ansible-deploy now supports bridging to Slack via the mx-puppet-slack bridge. See our Setting up MX Puppet Slack bridging documentation page for getting started.

As per the previous edition of TWIM, we had a blast on Sunday watching and reacting to Doctor Who episodes The Stolen Earth and Journey's End.

The next watchalong will be this Friday (Apr 24th), and we'll be watching another two-parter together, Human Nature & The Family of Blood, starting from 7PM BST! Guests such as Paul Cornell (writer), Charles Palmer (director) & Lor Wilson (Lucy Cartwright aka Daughter of Mine) will also be discussing the episode along for even more fun and behind the scenes!

This means that if you're reading this when this edition of TWIM goes out, and you fancy watching some Doctor Who this evening, join the fun at #doctor-who-watchalong:abolivier.bzh 😀

And if not, feel free to join the room anyway to find out when the next watchalong is happening 🙂