Matthew and Amandine discuss the week, including E2EE by default!

Lots happening this week! Cross-signing landed - this is a massive achievement for the team, and will go a long way to helping the user experience for new users especially. Read more in the major Riot blog post here. Time to start getting less-technical friends on Matrix!

Google announced their Summer of Code programme acceptees: Matrix have six students this year, our most ever! We'll make a new blog post next week welcoming the students!

In terms of Spec Core Team MSC focus for this week, MSC2474 has entered FCP. Keeping with the E2EE theme, we've switched focus to MSC2526. So the new list of MSCs for next week is: MSC2366 (verification flows), MSC2399 (UISI messaging), and MSC2526 (deleting key backups).

All of these changes will be available in v1.13.0 which should have a release candidate ready rsn.

Next week, we continue to work on sharding changes, further SSO support and ensuring that cross signing adoption is as smooth as possible.

Architect is a homeserver project written in Common Lisp. We intend to create a high performance homeserver using the meta-programming features of Common Lisp to reduce the amount of redundant and timely code that needs to be written and maintained.

I created a json-schema library, to generate class definitions directly from the Matrix specification. These classes also have information attached to them to allow for serialisation, using a metaclass from json-clos.

This is done entirely dynamically without writing to source files. The invocation of json-schema that creates classes for the client-server, server-server and application-service protocols is only about 20 lines.

I definitely approve of separating out the event library and generating it from the spec - Ruma also has this approach.

This week I refactored most of the data handling code to make it both more efficient and easier to read. I started by splitting a file called "data.rs" into multiple smaller files that handle just one part of the database, like "users.rs", "rooms.rs" or "edus.rs". I continued improving the code by making methods return iterators instead of vectors and propagating errors instead of crashing directly. Lastly, I added a few comments here and there and made sure everything works.

Finally, I want to thank my supporters on Liberapay.

After a few weeks of work the matrix-signal bridge is now functional again. In the process I also added the possibility to send audio and video files among other things.

If you want to try it out go to https://github.com/witchent/matrix-puppet-signal.

Easybridge is a multi-user bridge for small Matrix servers

Easybridge is a multi-user bridge for small Matrix servers, with the idea of making it easy for non-technical users to bridge their external accounts into Matrix. Once configured next to a server, users can just go to a dedicated web page and add their accounts with a simple form. Currently supported protocols include IRC (buggy), XMPP (basic feature only), Mattermost (quite in good shape) and Facebook Messenger (has issues with disconnections). Available at the following link: https://git.deuxfleurs.fr/lx/easybridge

Hello one and all. Today we're releasing the 1.2.0 of the slack bridge. No notable changes from the last RC this time, but another release should follow this one soon to make changes to the provisioning system :)

gomuks's e2ee support is now on the master branch. The basic olm/megolm things like key distribution work fine, but no advanced stuff like key import/export or device verification yet.

I'll probably add e2be to mautrix-whatsapp next and then add some of the advanced e2ee stuff to gomuks. I'll also make a v0.1.0 release in gomuks after I figure out some bugs in message history loading.

Apart from some further speedups, we've been working on reactions. Nheko can now display them and sending them should be done soon too. We also fixed a few bugs, when people reported them and you can now select, who you want to reply to by using a keyboard shortcut (Alt+Arrow keys for now). We will probably release a new version once reactions are done.

We have released RiotX v0.19.0 on the PlayStore on Tuesday! This is a pretty huge release, including all the work on cross-signing, but also other features like changing account password, deactivating account, saving media to Gallery, etc., without forgetting a lot of bug fixes. More detailed change log can be found here: https://github.com/vector-im/riotX-android/releases/tag/v0.19.0.

We are now working to implement the main missing features compare to Riot-Android, with the target to upgrade Riot-Android with RiotX codebase in a few weeks.

This week has mostly been another cross-signing week to improve it and to fix bugs. We released 0.11.2 on Monday. We are going to release 0.11.3 with the work we made this week. It should be available in the App Store tomorrow.

We also released MatrixSDK 0.16.4 with the last version of AFNetworking. That means apps using the MatrixSDK should be able to publish to the App Store again. There is no more usage of UIWebView.

Your favorite way of electron-free searching through encrypted rooms in Riot Web was just updated to v0.1beta11, featuring:

Take a look at https://translate.riot.im/projects/riot-android/ and see if you can help with translation there.

Nio (client) translations are also now available on Weblate - go forth, translate and help Kilian out. Or, "aushelfen" him, as he might say.

Revolution is a riot-web fork that has things like custom emotes. Have you heard of it before? Well, it's been around for about two years already!

You can try it out on https://ponies.im/_matrix/client/develop or build it yourself from the repos at https://gitlab.com/ponies-im

Things are progressing at a fast pace, and after a few weeks of mostly pre-releases, we've now got

With this release, it is now easier than ever to work with malformed and / or custom events. Some big changes are already being planned for the next release.

We basically just deleted lots of code that is no longer needed with ruma-events 0.21.0. We also got rid of the dependency on the url crate, which really didn't have a very good reasont o be there.

With this release, ruma-client-api is basically up-to-date with r0.6.0 of the matrix specification. Special thanks to @iinuwa for updating a bunch of those endpoints, and for adding support for the user-interactive authentication API!

After seeing the fabulous matrix live opsdroid party I decided to release my home-assistant bot.

I use this bot for triggering home-assistant automations via matrix. All commands and actions can be configured using just a config file.

P.S: Thanks for Opsdroid! ❤︎ 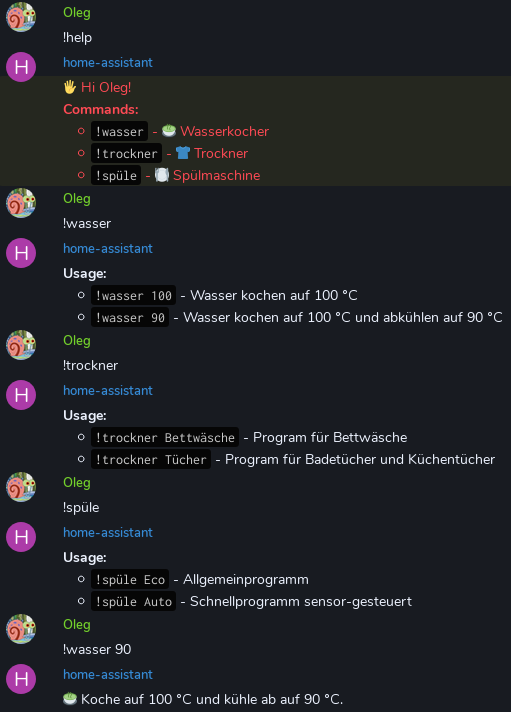 Awesome example of life imitating art! After we recorded the Matrix Live last week I resolved to get Opsdroid and Home Assistant running!

Anyone here is interested in AV1 (the new open video codec) and related modern codecs?

The Matrix community editions of the Doctor Who watchalongs continue! Next up on our line-up is another two-parter on Sunday (May 10th), we'll be pressing play on The Zygon Invasion at 7PM BST, then on The Zygon Inversion at 8PM BST! Joining us on Twitter will be Peter Harness (writer) & Ingrid Oliver (Petronella Osgood aka The Osgoods™︎), and maybe more 🙂

As always, to join the fun or know first-hand when the next event will happen, head over to #doctor-who-watchalong:abolivier.bzh