Open Tech Will Save Us 🎙

Second edition of OTWSU took place this week! Chance to watch it if you haven't already, or (pro-tip), watch it again.

German army reported in December 2019 their intentions for Matrix.

Now they decided to replace Stashcat with Matrix in this autumn.

Riot will be used as a Matrix client. The E2EE by default and device Cross-Signing will be extensively used.

Mozilla are happy with their deployment!

About a year after this tweet, four months after deployment of our open source @matrixdotorg instance, community participation in the Mozilla project has increased from 4x to 10x across all the projects that previously relied on IRC.https://t.co/E5HRsfHkzk

For more from Mike check out the OTSWU recording above, he's on first.

In terms of Spec Core Team MSC focus for this week, MSC2526 has entered FCP. We'd like to keep the E2E MSCs in flight in focus, but are also conscious that room v6 is coming up. We're sticking the MSCs for the latter alongside the existing E2E ones in the focus queue, for a total of 5. Those MSCs are: MSC2366 (verification flows), MSC2399 (UISI messaging), MSC2540 (canonical JSON validation), MSC2209 (notifications auth rules), and MSC2240 (room version 6).

This week I worked on presence and end to end encryption, but they are not working yet.

Meanwhile, Valkum got sytest integration working! This means each time a new commit is pushed to a branch, CI automatically picks up on that and lets a lot of tests run on the homeserver - the same tests that synapse uses. Currently we have 8% of all tests positive on Conduit.

At the same time, MTRNord tried to integrate opentracing into Conduit and Paul worked on a docker file to make installation easier.

See the bottom of this post for some more interesting numbers!

Synapse v1.13.0rc2 shipped this week with the following notable improvements:

...as well as all the usual bug fixes and especially performance improvements. See the changelog for the full details and please test if you can! A full release is expected early next week.

Speaking of next week: work will involve getting room version 6 ready to ship, alongside even more performance work - especially moving event processing off the master process (the code for which is already running successfully on Half-Shot's own homeserver)!

I've been working on a new puppet bridge for steam chat mx-puppet-steam, while I would still consider it to be in alpha state, most of the things needed for day to day chatting are functional.

It bridges both one on one and group messages, shows the proper name, avatar and online status of your frends and handles embedded images in one on one chats.

I have a docker image for it if that helps: https://hub.docker.com/r/icewind1991/mx-puppet-steam

As promised last week, mautrix-whatsapp now has end-to-bridge encryption (currently on the e2be branch, will be merged to master soon™). It works mostly the same way as the other bridges.

It's a big, big week for client news! We must take a deeper look at some of these projects soon!

Ditto is a mobile client for iOS and Android! It's available on TestFlight and Google Play (beta) - download link available on the website below.

I got really bored in lockdown, as we all have. I stared at my TV, and it stared back at me. While it's definitely a privacy nightmare to start developing apps for these things, I couldn't help myself. I got stuck in, and secured myself a LG Developer Account.

The LG set of smart TVs use WebOS, as like the name suggests, runs apps in it's special variant of Chromium. I was lucky to be running a recent OS and had access to Chromium 53! And NodeJS 0.12!! Sarcasm aside, there are some very troubling versions of WebOS with much older versions of the browser, so I was happy to be developing against something with strong ES6 support. Despite the absolutely awful onboarding experience, the WebOS SDK itself was pretty good. matrix-tv was written to be a general large screen matrix client, so it talks to the TV's own libraries through an abstraction layer :)

Anyway, this client is the culmination of a lazy Sunday afternoon's work. It features very basic support for viewing a room, but I hope to expand it at some point. It supports running in a web browser and the aforementioned OS, but support for more variants is easy to add. I'm looking into how to design for the large screen beyond making fonts bigger, because the unique constraints on memory and UI are fun challenge.

Nheko has it's own weblate btw, if anyone feels like translating a bit of stuff: https://weblate.nheko.im/engage/nheko/?utm_source=widget

Pattle is a client written for Flutter using Dart

A new version has been made available and will become available on Google Play and TestFlight!

Because of corona this might take longer than usual.

If you stumble upon any issues or would like to suggest features, please do so here!

You can login via GitHub and Gitlab.com!

We are making progress on Identity server feature implementation (PR in review). Also we are working to integrated call with WebRTC, integration manager (widget, Jitsi, sticker) and we are stabilizing the application, especially on the cross-signing part.

Expect a new corrective release at the end of the day!

I was able to solve a few annoying bugs like message history disappearing and switching rooms taking time (it turned out that read receipts were being sent synchronously), so I decided to release gomuks v0.1.0. 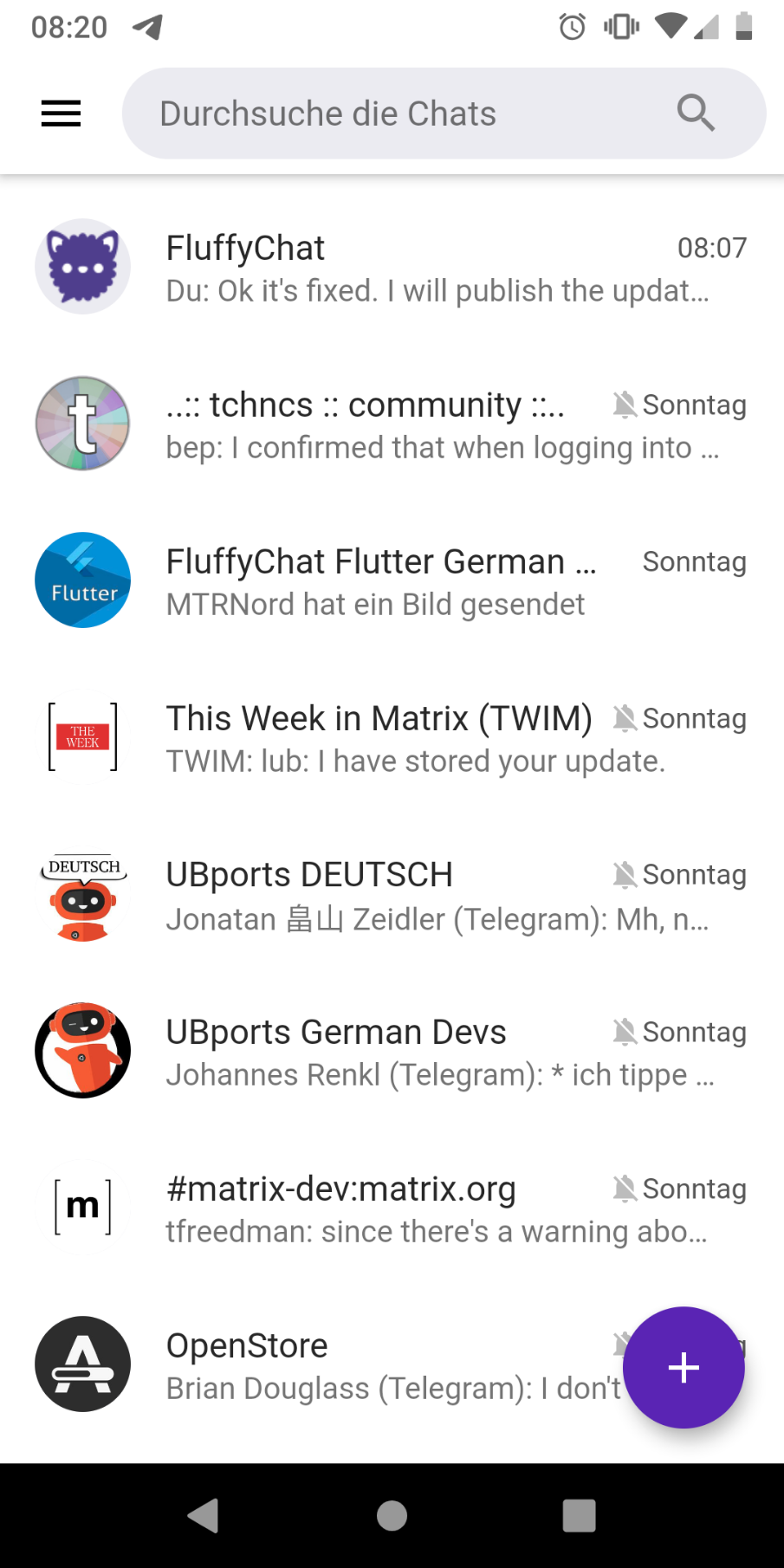 Since the last updates, there's been a few cool new features and changes added to Nio:

Join us in #niochat:matrix.org for discussion and more fun 😊

Riot-Android: Version 0.9.11 (with Matrix SDK 0.9.34) has been released on the PlayStore, and should be available for all during the week-end. It contains fixes on the identity server feature (the "missing token" thing), and also support Jitsi call with configured domain.

On the cross-signing side, we have been working on the implementation of SSSS (to recover all private keys from the HS) and on UI polishments.

On the maintenance side, the new push mechanism from Apple has been implemented but it needs more work to work properly.

This SDK is now on maven central. I also introduced support for implementing Application Services. The project can be found here: https://github.com/benkuly/matrix-spring-boot-sdk . It will be used by Matrix-SMS-Bridge, which only needs one telephone number. The latter will be released next week, when everything works fine (https://github.com/benkuly/matrix-sms-bridge).

Get it on pub, and see the source here!

The purpose of the bot is to provide a link with Jupyter kernels running either on your local computer or somewhere else on a server. You can access your kernels through the bot with the chat interface. The kernels will answer to your commands through the same interface.

Since this is still a proof of concepts, the number of features is limited (command line text, string and pictures are the only output formats supported. No widget, no funny javascript) and they are few safeguards against infinite loops and other entertaining bugs.

This is right now just a proof of concept. We want to see if such a bot can be useful for people and how. What features would be interesting, what can be integrated in the present clients,... Therefore, in the short term, we want to focus on the possibility of easy testing for users and easy contributions for people who want to add their ideas. On the mid- and long term, a lot of ideas can be realized; it will depend on the feedback. These are just some examples. Short term: 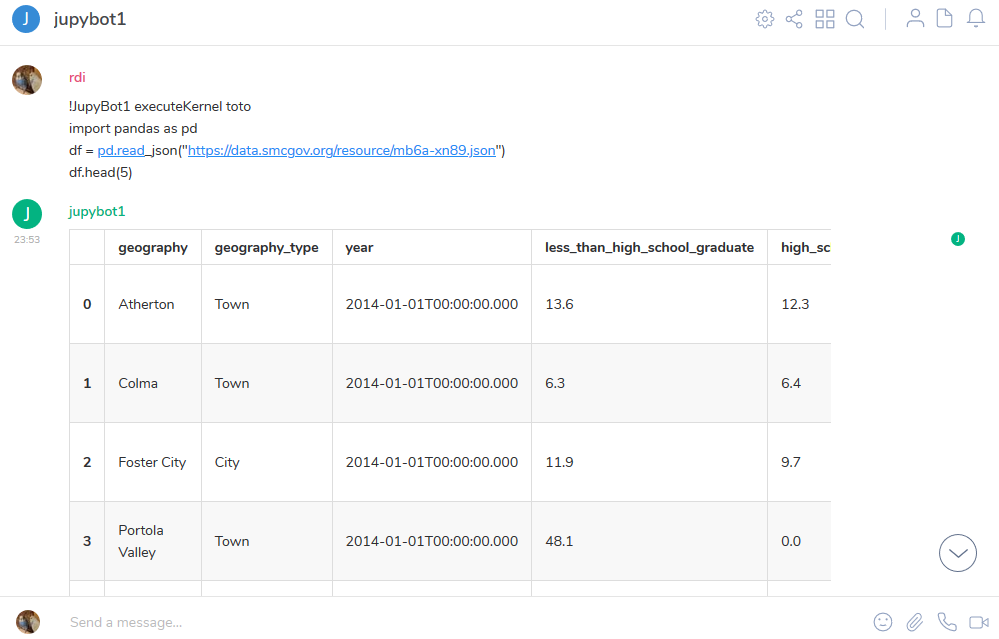 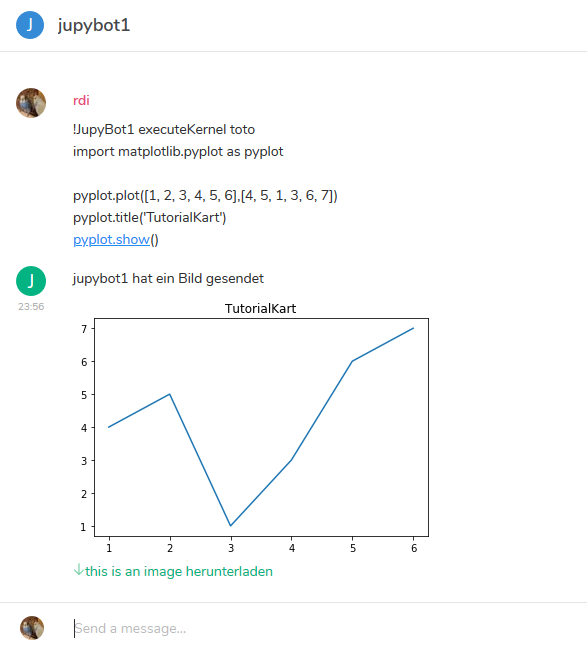 I made a little bot that scrapes https://news.blizzard.com/en-us , because they've disabled their RSS feeds for some time now. It regularly scrapes all posts of a configured category and sends messages for new articles to all rooms the bot is a member of. It works like a RSS bot, except the source is a website instead of a RSS feed.

In the readme there are also some public instances, which you can just invite instead of hosting your own bot.

I've added matrix support into a chat bot, you can see the chat bot in action at #midori-dev:hackerspaces.be and it's project page is here https://github.com/midoricorp/jabbot.
it's main highlight is anybody can add new commands to it in chat using its scripting language
any any existing bot command can be used as a function in new scripts you write
The scripting language to add new commands can be found here https://github.com/midoricorp/script
you can do things like
!script print "HELLO world";
or make a new command
!script sub hello { print "HELLO World"; }
that would result in a new command !hello being made
print also has 2 output stream, one for rich format and one for basic formatting
!script print "Hello World!"; print HTML "Hello <b>World</b>";

Matrix will be featured in a Rust London meetup on the 27th May 2020.

Hey, I have created a room for designers workin on matrix stuff to join: #matrix-design:disko.media

The goal is to improve cohesion and collaboration for all things design (UI, UX, interaction...) Over time, it should become a place for people to

Let's test homeservers against sytest, then unfairly pit them against one another! This week we're comparing Conduit and Dendrite - let's see the results!