Do check out the job description - this is a really fascinating role! If only I didn't have a job already...

In terms of Spec Core Team MSC focus for this week, the room v6 MSCs from last week's focus have all reached FCP 🎉 So we're continuing on with the E2E MSCs; MSC2366 (verification flows) and MSC2399 (UISI messaging).

Interestingly, this was produced with some new automation. 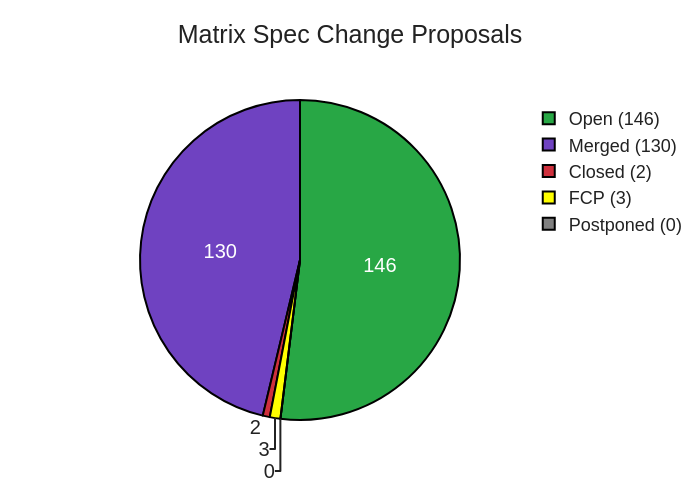 As if this wasn't enough, sorunome reported:

heya twimers who were excited about the emotes msc thing, soru added a few more things and it'd be cool if someone could cross-check it https://github.com/matrix-org/matrix-doc/pull/2545

This week I finished support for end to end encryption and also implemented media uploading, downloading and thumbnail generation! See it in action here:

If you want to see it with your own eyes, create an account via https://riot.conduit.rs. We hope to push our changes to Riot upstream soon, so you can use your own Riot to connect.

Finally, I want to thank my kind supporters on Liberapay.

Dendrite has seen a number of improvements this week, including:

This has culminated in the following values for Are We Synapse Yet:

This is a significant milestone because we now persist Dendrite databases to IndexedDB, greatly improving UX and giving users a consistent identity on the P2P network. In addition to this, the following changes have been made:

Known issues with this release:

Synapse v1.13.0 has landed with SSO fixes and support in User-Interactive Authentication sessions, the ability to run in worker mode using redis as an experimental backend (which will soon be considered the default transport for Synapse workers), the ability for server admins to define password policies, some alias bugfixes, some cross-signing fixes as well as many more continuous improvements.

v1.14.0 in now in development, which will feature room v6 support.

Be sure to read the upgrade notes before upgrading.

1.13.0 tags for the K8s-optimized docker image have been pushed

I released a new matrix bridge called matrix-sms-bridge, which allows you to bridge matrix rooms to SMS with one telephone number only. It is build on top of matrix-spring-boot-sdk and written in kotlin. Currently, only modems via Gammu are supported, but new Providers (e.g. some REST API) can be added very easily.

I'm going to integrate it into matrix-docker-ansible-deploy to use it in my corporate-environment.

mautrix-telegram v0.8.0-rc2 was released with some bugfixes and a basic implementation of Half-Shot's bridge information state event MSC. There will probably be at least one more RC with some more bugfixes in a week or two.

Last week I updated the messenger library mautrix-facebook uses to the latest upstream version, which might have made things work a bit better. This week mautrix-facebook got some more bugfixes and also a new feature to bridge animated stickers on Messenger into gifs on Matrix.

PlayStore and TestFlight will follow in the next few days.

Riot Web as Firefox Add-on? Yep, it's (still) a thing, now available as version 1.6.1 and supports search in encrypted rooms (via Radical Native)

Mirage 0.5.0 has been released today:

The team is working on getting feature parity with old-riot

This week, we released Riot-iOS 0.11.5 with the support of the new version of SAS (emoji) verification. This release contains also a fix for share and Siri extensions to make them compatible with cross-signing.
We continued to make progress on the full support of the iOS13 SDK. The new push extension is almost here but it is tricky to make it work as VoIP pushes we abused for years.

Just released version 2.1.0 of the Ruby SDK, headlines changes are the addition of request IDs (and timing) to the debug output to make request/response tracking easier, as well as finalized support for extending both the low-level and higher-level clients with MSCs - along with a much improved implementation for MSC2108 (Sync over SSE). Also included are some bug fixes, as usual, as well as many improvements to the provided example bot.

You can still find it on rubygems as matrix_sdk, and feel free to drop by #ruby-matrix-sdk:kittenface.studio for questions, comments, or just general discussion.

This week, we worked on support for endpoints with multiple values for one query parameter (in a livestream), federation endpoints for joining rooms and the next revision of ruma-events [1, 2] (that will, once finished, allow us to finally support redacted events properly, amongst other things). We also fixed two small bugs in ruma-client-api. Just today, we released ruma-client-api 0.9.0 and ruma-client 0.4.0 (sorry, no change log ☹︎).

Our website has been revamped! It has been ported from Middleman to Zola and has received some style improvements. RSS support has temporarily been removed, but you can expect it to be restored along with some content updates soon.

I have written a guide about configuring bridge to FreeNode: https://github.com/matrix-org/matrix-appservice-irc/wiki/Setting-Up-Bridge-To-FreeNode

A rather infrequent section.

Since multiple people have asked me about it, I now have a GitHub sponsor thing where you can get a fancy flair in my rooms and access to a highly exclusive sponsor room.

I didn't have any public donation things earlier due to the Finnish money collection act, but I realized that I can bypass that by selling things (like access to a Matrix room) instead of it only being a donation.

Last week we featured some Sytest output and compared the results between homeservers, which was fun! We'll bring this back as an occasional feature.