This week we have demos from our core team remote sync!

In terms of Spec Core Team MSC focus for this week, we've still got MSC2366 (verification flows) and MSC2399 (UISI messaging), however they are now joined by a third, secret MSC that we'll be working on internally for now :) 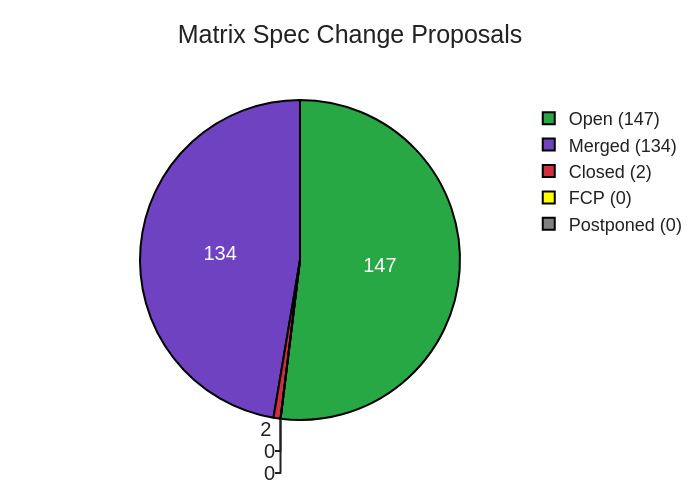 It's been a little while since we've done a round of spec releases, so we have a bunch of spec releases to share. If you're implementing something from the spec, please have a look at the news: https://matrix.org/blog/2020/05/27/room-version-6-client-server-r-0-6-1-and-federation-r-0-1-4-spec-releases/

As always, any questions about the spec itself can be answered in #matrix-spec:matrix.org, #matrix-dev:matrix.org, or in the various area-specific rooms floating around the federation.

Hello again! This week I worked on access control, which means that private rooms are private and invite-only rooms are invite-only. The public room directory only shows rooms marked as such now.

I also made a milestone to track progress on Conduit 1.0. This release marks the point where Conduit is fully usable as a non-federating homeserver. All features of the client server specification should be implemented, unless they can be seen as optional extensions (e.g. alternative registrations methods like email). Conduit should also be free of all known bugs with those features.

Adding federation on top of the 1.0 release will very likely require breaking changes. This means that the release which brings federation will be 2.0 or later and will require a partial or full database deletion.

@TravisR wrote a fix for Riot Web, so you should be able to create accounts on Conduit from <https://riot.im/app> soon.

The main news this week is that we switched event persistence away from the matrix.org master process which has made a big difference to overall performance. The impact is best demonstrated by graphing message send times.

Next week will be having a think about what to do next for matrix.org performance. Watch this space.

I made a TARDIS (Time Agnostic Room DAG Inspection Service) - a simple time-travelling debugger for Room DAGs which plugs into Dendrite's internal APIs to visualise room DAGs. The intention is to provide it as a widget which Riot can use to visualise DAGs for debugging, particularly for P2P Matrix. The time-travel bit is simply that it could let you filter out the newer events to show how the DAG has evolved over time, although that isn't hooked up yet. https://github.com/matrix-org/tardis 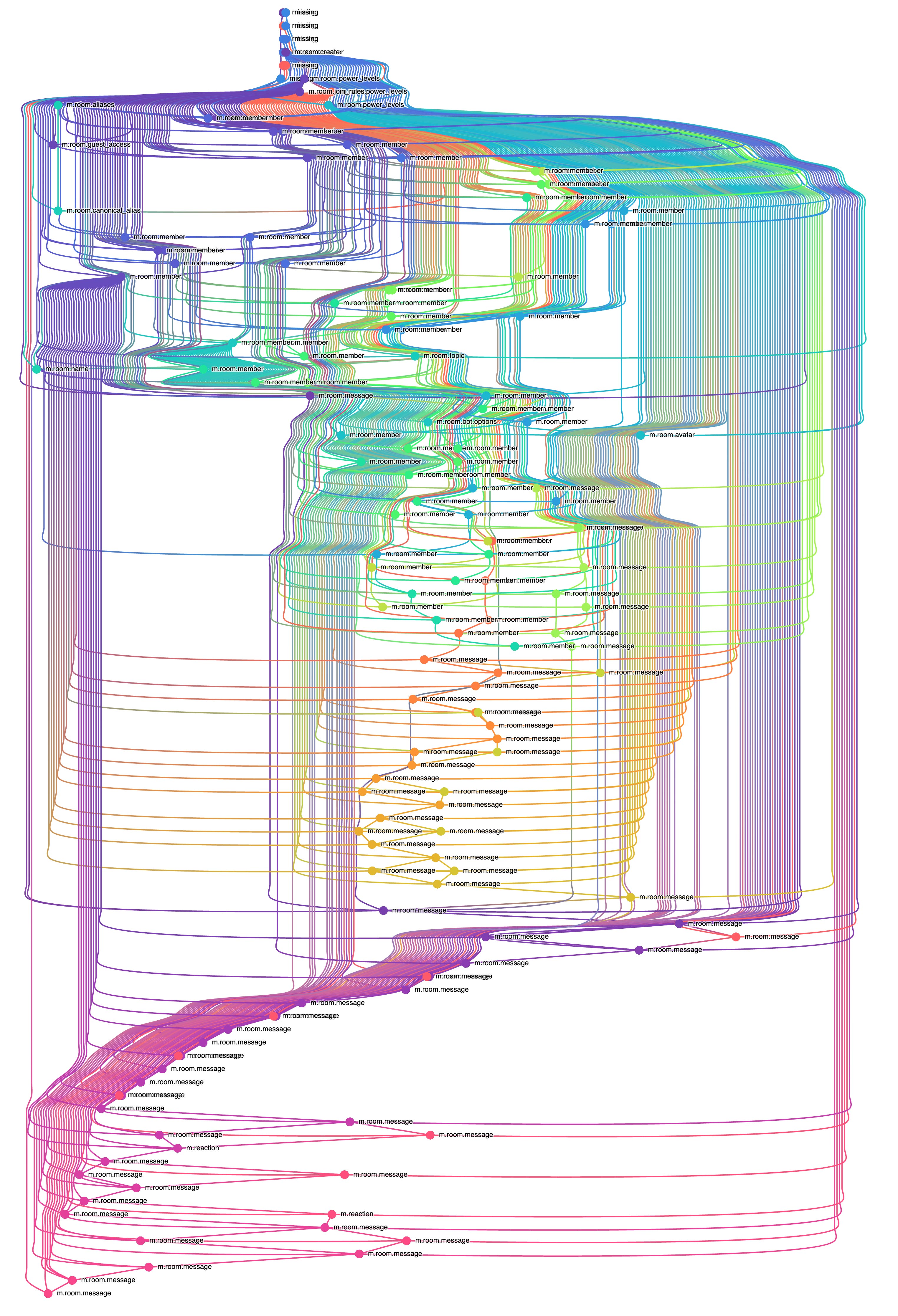 Just pushed the K8s-optimized images for Synapse 1.14.0 - slight changes have been done to the image to further streamline it a bit.

Thanks haywo for this update:

buildbot-matrix v0.0.5 has been released:

buildbot-matrix is a small plugin for the Buildbot CI framework which sends notifications to matrix rooms. It's available an GitHub and PyPi, take a look at https://github.com/HayWo/buildbot-matrix for more information.

Let's start with the big news of the week

I, Half-Shot, changed the status of the IRC Bridge on https://matrix.org/docs/projects/bridge/matrix-org-irc-bridge from "Early beta" to "Stable". This does not mean it's feature complete, or even all the way there, but it sure doesn't crash nearly as often as it did when I started, so that's good enough for me.

Hey folks, we've released the first RC for 1.4.0 of the slack bridge. This change includes a number of bug fixes around puppeting, but includes a few nice to haves like a /ready endpoint for kube/docker deployments and setting profile information on startup. Please test, and feedback in #matrix_appservice_slack:cadair.com :)

I've been working on improving the reliability of my bridges, primarily by making sure that the user knows if something went wrong. All my bridges now support delivery receipts (implemented as bridge bot read receipts) and can send delivery error messages if there was an error bridging a message. The Facebook and Hangouts bridges also now send connection status messages to a bridge notice room like WhatsApp already did before.

Certainly not from this week, but we haven't featured it before: Minetrix allows you to bridge a Minecraft server with a Matrix room.

I read recently that Minecraft still has 126 million MAU!

Daydream is the Idea of a Rust Matrix Client. It is still in a very early state and at the time of writing this supports basic displaying of text, image and bot messages as well as sending plain text and markdown.

Try it at https://daydream.nordgedanken.dev/ or check out the Source Code at https://github.com/MTRNord/Daydream 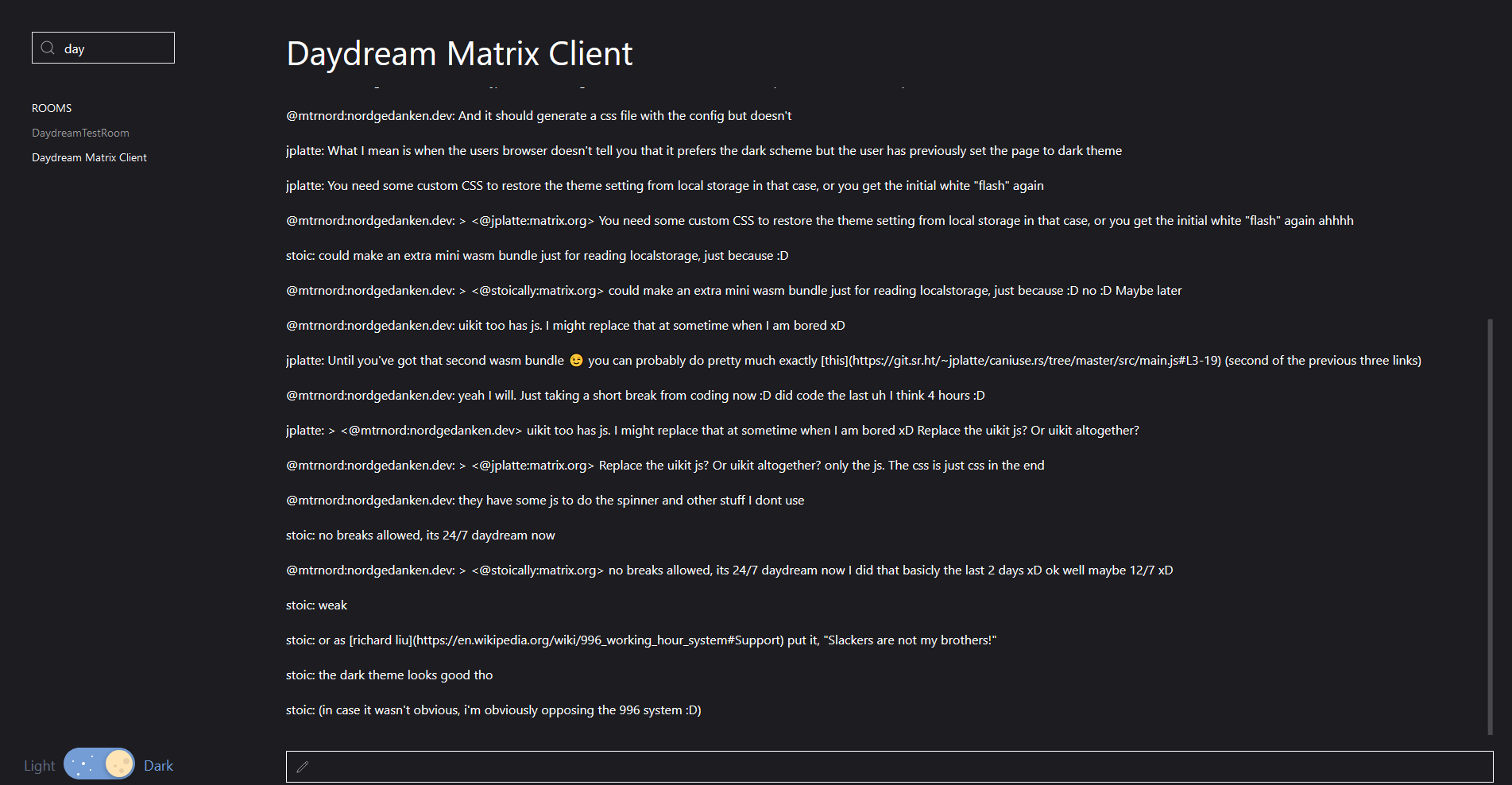 A new notification bar under the message window displays notifications such as membership changes, typing, and read notices. I am hoping to have an actual release on crates.io by the end of the day. If you have any thoughts join #rumatui:matrix.org or check it out on github.

This week on Riot-web, we've been:

Riot-iOS (and MatrixSDK and MatrixKit) is now fully compatible with iOS13 SDK. A TestFlight 0.12.0 will be available soon.
The work is still on its branches (xcode11). It comes with the new notification service mechanism and we want to run a lot of tests next week before going to production.

midori jabbot 0.5 has now been released.

This is the first release of jabbot with support of matrix in it. This release also includes support for DISCORD.

This is a great resource for helping explain how cross-signing works!

After explaining cross signing to others multiple times in the past and seeing the question again on mastodon, I decided to write a short blog post on the topic, explaining how the keys interact with each other and how Alice's devices then end up trusting Bob's devices. You can read it over on https://jcg.re/blog/quick-overview-matrix-cross-signing/

This one isn't quite merged yet as we're going to give a thorough review, but big thank you to sorunome for taking the time to put this together:

While implementing cross-signing for fluffychat soru decided to write a guide that would help other client developers to implement that, too. So far it is still WIP and doesn't cover too much, yet, but soru might have typed up more once this TWIM goes live. The PR (and thus the markdown of the guide) can be found here: https://github.com/matrix-org/matrix.org/pull/740

Matthew spoke at Rust London meetup earlier in the week, check out the video!

May I advertise #matrix-design:matrix.org to you.

It's a bunch of people who are passively learning design for their matrix projects. You might pick up a few things if you join :p

You may have seen that Mastodon is preparing to implement Olm! Read some news in German or why not watch Gargon on Open Tech Will Save Us #2 where the idea was first discussed? It's like you're in the room where it happens... 🎶