If you somehow missed this, please take a look!

In possibly more exciting news, the Spec Core Team has decided to start separating the scattered casual implementation tips and notes in the spec out and putting them in a series of implementation guides! These will take the form of gitbook-style things, and will initially feature front-to-back implementation guides for a generic Matrix client and homeserver. For more details to provide feedback, check out the associated MSC2618! 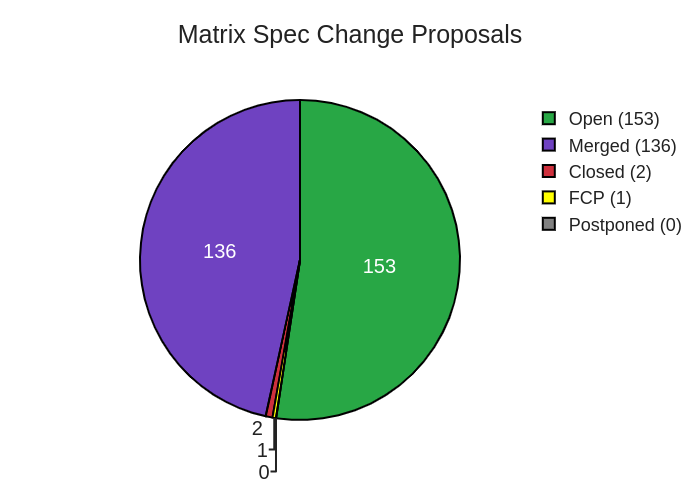 This is the second week of the coding phase of GSoC 2020. Find updates from the students below:

Matrix has enormous potential to be used in many different use cases be it embedded chat rooms, comments section, chat boxes, etc. This project aims to fill that niche by providing an easy to use and easy to deploy client for users to embed on their webpages.
The client would mesh well wherever it is embedded by providing a postMessage interface to allow the parent webpage to interact with the client and dynamically modify it whenever needed (For example:- A comments section that is always the same theme as its parent webpage).

As of now, the following features have been added (with more on the way)

Currently, I'm working on adding more options to the postMessage interface as well as adding more interactivity to the client itself.

Find out more on the project page: https://github.com/arnav-t/riot-embedded.

This week in ruma-events' Google Summer of Code project, I was able to finish the macros needed to generate the event content enums and trait implementations required for events. I started by defining the generic event structs (state, message, etc.) and manually writing the Serialize and Deserialize implementations. Over the next few days, this was moved into a custom derive macro called Event. The derive now implements all necessary traits with appropriate bounds, so a StateEvent<C> can not contain any ephemeral event content and so forth. I have removed the raw mod and related FromRaw and TryFromRaw traits, moving the validation into the deserialization and constructor for the few types that needed it. On the event content side of things, a function like procedural macro was used to allow declaring the enum using Matrix event type identifiers.

Much of this week's work has been maintenance-related with refactoring, cleaning up etc.

We have also started building an Yggdrasil-powered P2P demo (as opposed to the previous demos built using libp2p) and even includes support for embedding Riot Web in the single binary. It's not very stable/usable yet but there will be more news on that to follow within the next couple of weeks.

We have also started building and releasing Docker images for Dendrite on Docker Hub for those who want to use Docker to test Dendrite deployment.

Welcome back! This week I focused my efforts on better error handling. My goal was that every problem would be forwarded to the client (e.g. InternalServerError response) and also be logged. Yesterday I merged the giant PR this resulted in. Hopefully this will make Conduit easier to debug in the future.

Here are some other things I finished this week:

I also found the problem with Riot not showing notifications for new messages and created a bug report. With a few tweaks, I managed to solve this on my account and now mentions, DMs and more play the notification sound (it also works on Riot X!).

@gnieto fixed a bug that prevented Riot from loading history when you join a room and @PublicByte implemented the /whoami endpoint.

Thanks to my supporters on Liberapay!

This week we shipped 1.15.0, edited highlights include:

Aside from that we continue out push towards improving performance both in terms of sharding workers but also improving tools to manage disk space usage. Specifically this week and next we are looking at db tuning and sharding the media repo worker. We are also noticing that the typing handler is chewing more CPU than would be expected. It could be a good candidate for moving away from the master process.

More broadly we are changing the defaults for notifications and making changes to support a more general overhaul of notifications.

Finally we are looking at how to not only delete messages after a certain time period, but also how to delete the associated media (which becomes difficult when considering e2e content along side long lived content such as avatars and sticker packs).

For more detail on what is coming next, take a look at our public task board.

It also now encrypts media properly when bridging messages in encrypted rooms. I had apparently missed that when adding end-to-bridge encryption earlier.

mautrix-facebook got a few improvements and bugfixes:

Since MSC2190 and the related Synapse PR aren't moving much, all my bridges now generate appservice registration files with the workaround. The workaround is needed to avoid patching synapse or using other hacks, and I decided to enable it by default as many people had problems related to having to apply it manually.

The WhatsApp, Facebook and Hangouts bridges now have an option to use double puppeting to disable notifications when backfilling. It can be useful if you want to copy chat history to Matrix, but don't want to be spammed with hundreds of notifications while it's happening.

To get things ready for NovaChat launch, we added a bunch of new features to a fork of the mx-puppet-slack client that Sorunome created. You can try it out here. We'll be pushing our changes upstream soon.

My matrix-sms-bridge got an large update, which introduced an automated way to create and write messages to telephone numbers via commands in a bot room. See the docs for more information, how to use it.

Introducing NovaChat - a desktop chat client that supports 9+ different chat networks, built on top of Matrix. Think of it as a modern Adium/Trillian.

NovaChat is a system with three parts designed to work together:

Matrix bridges are awesome but generally require you to run own homeserver. NovaChat removes that restriction, without sacrificing security and privacy. Your remote chat network credentials never leave your bridgebox, and messages are encrypted* on the bridgebox before being sent to the NovaChat homeserver.

You don't need to be technical to use NovaChat, it's designed to Just WorkTM. If you need help setting up a bridgebox, we are offering hosting and maintenance for USD $5 per month.

The vast majority of this software has been created by the talented tulir and dm0141. I personally am a terrible coder (you can tell which parts I did), but I do have experience building products and teams, and I'm excited to begin working in the Matrix universe. I wrote recently about how I believe Matrix is the Universal Communication Bus! Thanks goes to Sorunome for creating the mx-puppet-bridges!

We're developing the whole project in the open (though not all components are open source), check the issue backlog :)

Want to help? We're hiring Matrix developer to work on the project with us. Send me a message if you're interested! Particularly looking for a React dev to help with frontend on nova-web. nheko 0.7.2 is ready for release. Here's the summary of changes:

With improved support for media and tombstone events and a bunch of bug fixes! https://github.com/matrix-org/matrix-static/releases

Should be deployed to view.matrix.org shortly

I've made an Arch Linux package of radical-native.

The team is currently actively working on:

There's been lots of work many fronts this week, including:

Most of this work is still in progress or has only landed on develop so far. Our next RC will happen next week.

This week, we continued to iterate on the implementation of the new push notification service thanks to user feedbacks. Those feedbacks also show that the app uses less battery.

On login, this is now possible to recover your cross-signing and your key backup from your recovery passphrase or key.

libolm 3.1.5 has been released. It mainly collects the various build system and documentation fixes that have accumulated since the last release. It also includes a new wasm build target (which apparently is used for running matrix-rust-sdk in the browser), as well as TypeScript definitions for the JavaScript bindings.

Most of the work this past week was on ruma-events, for more on that see the GSoC section! Devin got far enough with that so we now know it all works out and can replace the previous ruma-events API. When that was clear, ruma-events was also merged into our new monorepo; now the only remaining crate to be merged is ruma-client (where I'm also waiting for some pending changes).

Version 2 of my Matrix Helm chart is out! It now allows for running a federating homeserver without needing an external load balancer for the federation service, potentially lowering costs (depending on your cloud provider), and definitely reducing the headache of managing TLS certificates!

dacruz21/matrix-chart is a Kubernetes Helm chart for easily deploying a Matrix homeserver stack, complete with Synapse, Riot, VoIP calls, bridges, and other backing services. It's ideal for anyone looking to run a large homeserver, or for corporate environments where security is paramount!

Dept of Internet of Things 💡

This week I've programmed a small POC for a Matrix weather station.

It's build using a ESP8266 Microcontroller and a BME280 Sensor for temperature, humidity and barometric pressure.

The data is send over the Tuple Matrix <-> MQTT bridge.

You can join this project on #tuple:eiselecloud.de.

Anyone running a federating instance of Synapse will likely have seen this: Synapse is database-hungry. It tends to take a lot of space. In this post, I'm documenting how I shrunk my homeserver database from 100GB to a little under 8GB, during a long maintenance cleanup. https://levans.fr/shrink-synapse-database.html

Very pleased to see this, I have a feeling I'm going to be running it in the near future...

There's a new room "Matrix Outreach" #matrix-outreach:matrix.org for folks interested in "Helping each other explain and promote Matrix to the public: creating slogans, introduction leaflets, info-graphics, elevator pitch, Wikipedia articles, and so on."