Matrix Merch Store is back

Are you emerging from lockdown? Dazed and wondering what to wear? Need some apparel which says "I'm cool and I have great taste in decentralised communications protocols"? Then you should visit The Matrix Merch Store!

Matrix Decomposition: Analysis of an Access Control Approach on Transaction-based DAGs without Finality

We published another scientific paper on Matrix, this time it is called Matrix Decomposition: Analysis of an Access Control Approach on Transaction-based DAGs without Finality! Its main topic is the question of how access control can work based on a structure that only provides a partial order on events and no consensus on the current state, i.e. the Matrix Event Graph. We found some concrete, non-critical security issues related to both incorrect specification as well as divergent homeserver behaviour. While the last remaining mitigations found their way into Synapse 1.14.0, we provide ideas on structural solutions to avoid both problem classes in the future using formal verification.

The paper was published at the ACM Symposium on Access Control Models and Technologies(SACMAT) last week. My talk went well (🎉), it was recording and is yet to be published by the conference.

The paper was previously mentioned on the Matrix blog.

In terms of Spec Core Team MSC focus for this week, the team has been spread a bit thin with other work. As such, we're still on the same three MSCs: MSC2366 (verification flows), MSC2403 (knocking), and MSC2630 (SAS security). We're hoping this week will be more productive in terms of spec. 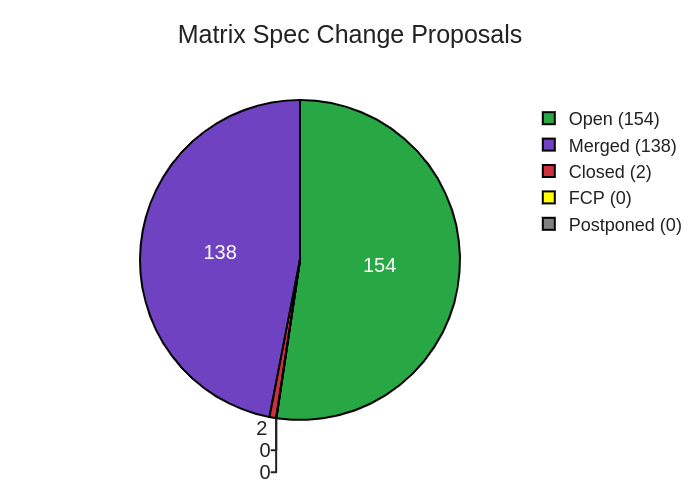 This week has seen a lot of work put into fixing broken tests and refactoring parts of the codebase.

In addition to that, we've made good progress on embedding the Dendrite-powered Yggdrasil demo into Riot iOS, which we'll hopefully be demoing in a couple of weeks!

We fixed a spec compliance bug in fetching remote media raised by our pals in Dendrite-land. We fixed a bug causing federation .well-known requests to fail due to not including the user-agent header. We removed references to six (thanks @ilmari) and finally, fixed a bug that caused stream id to go backwards on the replication stream.

Next week we’ll continue to work on notifications and performance. You can track our progress here https://github.com/orgs/matrix-org/projects/8

Wondering how quick this weeks synapse release was adopted by homeserver admins? Head over to https://graph.settgast.org/ and see yourself that it only took a little over 2 days for 1.15.1 to become the most used synapse version. I plot hourly distribution of synapse versions there. (Disclaimer: Only collects stats for homeservers that my homeserver sees in any of its rooms, which are around 2000 at the moment)

This is super cool! I love that this has been created, and also how well it reflects on homeserver admins! /me scurries to update to 1.15.1...

What version are you running?

Synapse on a ROCKPro64

How is Synapse performance these days? PINE64 are running their instance on their own ROCKPro64 hardware.

This week I worked on server-side key backups and cross-signing - the second most requested features (federation being the first one). Key backups are already working! Take a look:

Cross-signing should be working, but there is a bug where emoji verification gets stuck. I hope we can find the mistakes and finish the PR next week.

Thanks to everyone who supports me on Liberapay or (new!) Bitcoin!

The image for synapse v1.15.1 including jemalloc and mjolnir anti-spam has been released to avhost/docker-matrix:v1.15.1.

For matrix-ircd google summer of code:

To make the bridge info state events a bit more useful, all my bridges now include the room name and avatar URL in them. The events are also updated whenever the name or avatar changes, and there's a new option to re-send the event to all existing portals so old portals would get it too.

RiotX: Version 0.22.0 has been released on Tuesday, it includes integration manager support, sending stickers, modifying power levels, and lots of other things! See https://github.com/vector-im/riotX-android/releases/tag/v0.22.0 for a complete list of the changes.

This week we've been working on audio and video calls (The PR is in review). We are also trying to improve the performance of the application. We are adding room settings, and we have started to work on the migration Riot-Android -> RiotX.

I made an Arch Linux (AUR) package for Revolution - a Riot fork by ponies.im:

Daydream is getting a new Design and the first page is ready at https://app.daydream.im/

Currently on top of the TODO list of Daydream is: 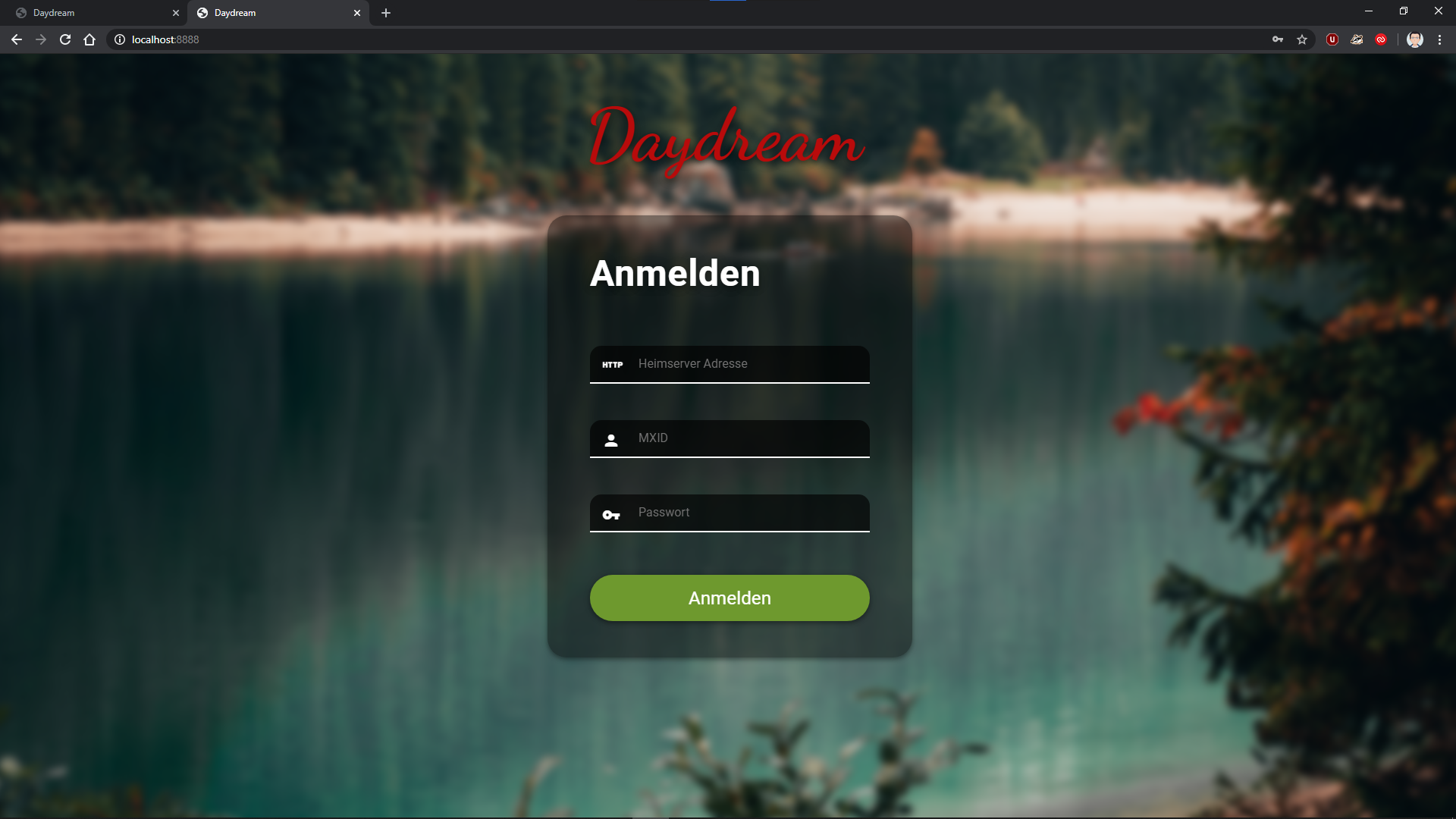 After some slow progress, rumatui, the rust command line chat client, is usable by anyone. You no longer need an account or have previously joined rooms. Registration and room search have been implemented! Using left/right arrow keys from the login screen will toggle to registration. Once registered hitting the left arrow will bring up the room search window. After typing your search term hit Enter and select the room to join by pressing Ctrl-d.

For the brave who would like to give it a try cargo install --git <https://github.com/DevinR528/rumatui> --branch room-search.

"Basically usable" is a standard we can all aspire to for our projects and endeavours.

This week, we worked on the new UX for cross-signing and secure backup. In parallel, we continued to improve the new push implementation. We are very closed to complete the two features.

I added a command to add and remove local aliases for rooms. Changes to alt_aliases are also now rendered properly.

This week we had an off-cycle 1.6.5 release to fix registration on some homeservers when email validation is required. After that, we've made a 1.6.6 RC including:

made a couple riot themes! Dracula and Dracula Flat

Go to https://github.com/aaronraimist/riot-web-themes to find out how to use these.

Wowow that's a lot this time!

after a couple of setbacks that didn't let us to make the releases earlier, the Quotient project has finally made two new releases:

Expect more news in the coming weeks, including continued work on matrix: URI proposal and its implementation in Quotient.

devinr528 sent us this late entry!

This week in ruma-events' Google Summer of Code project, after trying out the new Any*Event enums matrix-rust-sdk, we found a few big flaws. There was no easy way to go from StateEvent<AnyStateEventContent> to StateEvent<SpecificEventContent>, the other issue was one could create a StateEvent with differing content and prev_content fields using the AnyStateEventContent enum. The 0.22 ruma-events will be similar to the existing API; each event type has a corresponding event enum variant.

There were a few minor fixes during the week also. Unknown field deserialization is fixed, allowing deserialization of a JSON blob that has extra fields which are ignored. Custom events are now present in the Any*EventContent enums, although now they have to be moved up to be included in Any*Event enums. Benchmarks for deserialization have been added and used to increase performance.

Polyjuice Client, a Matrix library for Elixir, had a new release. This release fixes syncs, which apparently were completely broken in the last release (whoops). The wizarding community also welcomes a new contributor, Pierre de Lacroix.

Dept of Internet of Things 💡

I heard that you people like IoT?! With the Mozilla WebThings Matrix Adapter your Raspberry Pi sends you messages about your home. Want a log of when the front door has been opened? Need a low battery alert for your IoT devices? With the Mozilla IoT gateway and this adapter, you can send these events to a Matrix room of your choice!

Ever since m.room.aliases was replaced with alt_aliases, there hasn't really been any way to find aliases on other servers, since most room admins don't bother finding and publishing alternate aliases. To help solve that problem, I made a maubot plugin to let users publish alternate aliases in rooms: https://github.com/maubot/altalias

By default it lets users publish aliases with the same localpart as any already published alias. If that behavior is sufficient, you can simply invite it to a room and give it permissions to send m.room.canonical_alias events. Alternatively, it can be configured to allow aliases that match specific regexes.

Once it's set up, users can create a local alias and use !altalias publish <their alias> to publish it. The bot will make sure the alias points to the right room, check that the localpart is allowed and then add it to alt_aliases.

I have it running at @alias:maunium.net and I've added it to all my rooms already. Other rooms are also free to use that instance.

As of https://github.com/NixOS/nixpkgs/pull/89327 a go-neb module was added to nixos and will soon be available on nixos-unstable and in the 20.09 release. You can use it to declaratively install and configure go-neb matrix bots on nixos. I use it for prometheus alertmanager alerts and it works really cool! Thx to hexa- who did most of the work on it.

opsdroid 0.19 has been released, not many matrix specific features in this release, just making it slightly easier to get a connector or database instance by name. However, this release paves the way for the merge of the pull request transitioning opsdroid to use the matrix-nio Python library, so the next release should be packed full of matrix stuff 😀

Thanks to Alexander and Nico for their help editing this edition.