Matrix is being used in the "world's biggest messaging and collaboration" deployment.

In terms of Spec Core Team MSC focus for this week, we'll be continuing on with MSC2674 (aggregations pt1: relationships) and adding MSC1544 (QR code verification) on top. 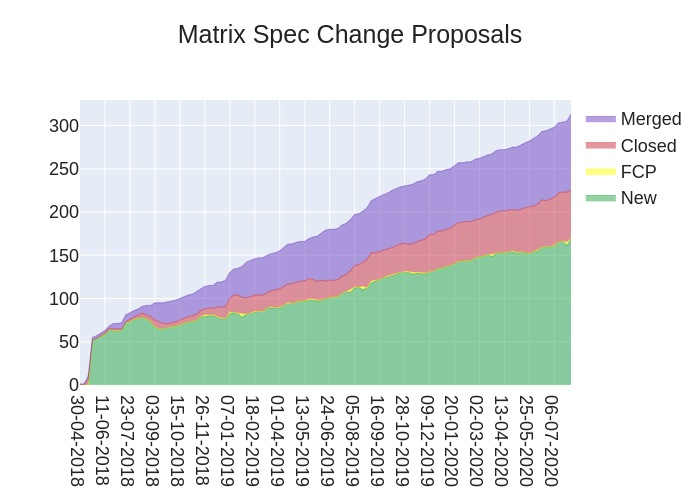 E2E Dendrite work is progressing, and we're making a lot of breaking changes ahead of our first stable release which you can expect in the coming weeks.

As for the changes this week:

Spec compliance is up from last week:

Welcome back! This week was very productive:

This week we shipped 1.18.0 which contained support for our worker sharding performance projects that you’ve been hearing about recently.

We also shipped a security and feature release of Sygnal (actually two each…). The main new feature being the ability to run behind an HTTP proxy which is useful in environments that mandate that all traffic go through a proxy.

We’ve been documenting worker support and diving into sharding the event persisters. This is not a small job since it means every other part of the code base that assumes an integer stream id will need to be updated to be aware of multiple stream ids from multiple persisters.

Over in feature land we’ve been working on the notifications project and most of the backend support is done. The project will mean more intuitive defaults as well as a much better client UX in configuring notification settings.

Finally special thanks to Aaron Raimist for a bumper docs PR

Just pushed the 1.18.0 K8s-optimized Synapse images, now only doing the debian-based version as like upstream - though still including jemalloc. So latest/v1.18.0 and *-debian will be the same in this version and going forwards. Additionally, the *-debian tags will only remain for a release or two more before disappearing, as they're now superfluous.

I finally added automatic backfilling options to mautrix-telegram. Like my other bridges, it can backfill old messages when creating portals and missed messages when restarting, and it can disable notifications in the room while backfilling.

I also added bridging for your own read receipts, so if you read a message with another Telegram client, the bridge will mark it as read on your Matrix account with double puppeting.

Adding new users weekly. Sign up for the NovaChat beta. Or send me a DM @eric:nova.chat

gomuks can now do interactive verification for e2ee. Most of it is thanks to nikofil's SAS verification PR to mautrix-go, I just made a UI for using it. Currently gomuks can only send verification requests, but I'll add some interface for accepting incoming requests soon.

Related to verification, there are some new commands for verifying/unverifying/blacklisting devices and viewing device lists. There's also a toggle to disable sending messages to unverified devices.

This is super exciting, raises gomuks to the level of a daily driver IMO.

We will release version 4.4 next Friday. Now is a good time to test the nightly version and check if it doesn’t break anything with your homeserver compared to 4.2.
The changelog has been sparsely given in previous TWIMs, but you could have a look at https://gitlab.gnome.org/GNOME/fractal/-/commit/463e6bc9988e2d8fffbfc38058f8d0b12cd074d7

We released 1.0.2 this week to the AppStore and on TestFlight. It's mainly a bug fix release after the Element rebranding.

SAS verification support has been merged! Support for it should also be landing in go-neb soon, both for verifying with the bot's device and for testing with go-neb's client testing service. Next up, looking at SSSS and eventually cross-verification support.

Riot Web integration had been updated to 1.6.8 (Element 1.7.1 available in branch element)

We, some German Synapse admins, have created a survey about the usage of Matrix-Synapse for private statistic purpose (results will be published alike). As suggested in #synapse:matrix.org, this could also be a topic for "TWIM".

Find the survey at http://go.kabi.tk/MatrixQuestionnaire2020.