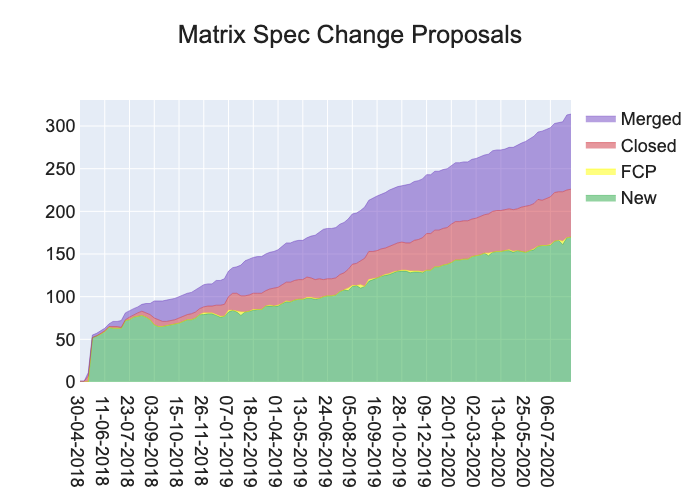 The Element P2P demo on iOS has seen a number of updates in the last week - now at build 31 - which contains a number of fixes:

If you have an iPhone or iPad and want to play with the demo, grab the public TestFlight!

v1.2.0 is out now, with a bunch of bug fixes and some added features:

v1.2.0 is also much faster at file uploads, however some areas of matrix-media-repo can still be improved - general performance work is planned for the next release.

We are happy to announce the beta milestone for our first versioned release of Dendrite, which we anticipate to land in the next few weeks. Once these issues are cleared, we'll have made the big breaking changes that we want to make and will have a migration mechanism in place for database schema upgrades.

This will make life significantly easier for anyone who wants to start experimenting with and running their own Dendrite homeservers without unexpected breakages. More updates to follow soon - join us in #dendrite:matrix.org for the latest!

This week, Dendrite's end-to-end encryption support has also been mostly rounded off with the exception of a few minor bugs and edge-cases.

Asked whether this progress means that matrix.org would be running on Dendrite next year, Neil said he was certain that it would definitely be ready:

Oh and btw look at Matrix Live this week!

This week in Synapse land we continued with our performance push making further progress on the async/await-athon. We will move into the storage layer this coming week which will leave the caching layer and a few other bits outstanding. Separate work continued to get the event persister into a shardable state. The first step being to replace the event stream token with its own type and then threading that through the code base.

We have also continued to improve on our push capabilities and released a new version of Sygnal (0.8.2) with support for pushing to iOS devices via Firebase.

We are also very close to getting a workable version of the new push rules. The idea is to test it out in the wild before getting it enshrined in the spec.

Next week will see a continued focus on sharding and async/awaiting, more notifications work, logging improvements, and a host of bug fixes!

I released v0.2.0 of the maubot RSS plugin. The most recent addition is support for JSON feeds, inspired by FantasyCookie17's jsonfeed-bot.

All my bridges now have options for automatic e2ee key sharing in portal rooms. Currently they don't have verification support (other than manually marking as verified in the database), so enabling key sharing isn't entirely secure yet. I'll probably invent some sort of web verification interface after nikofil adds cross-signing to mautrix-go.

This also means mautrix-python now supports sending and responding to key requests. I'll port the interactive verification and future cross-signing code from mautrix-go to mautrix-python at some point too.

After we announced our intention to release, we discovered a regression that prevented joining new rooms because there was a mixup between room aliases and room id during a switch from internal structures to ruma-identifiers. Luckily we managed to fix it in time and make the release as intended.

The team has been mainly working on stabilisation + refactoring of the current code base.

We are also trying to give more visibility on what is coming next:

The team is partially off, expect some delays in handling of issues and PR reviews

SchildiChat is a new fork of Element for Android (previously RiotX), which features some UI changes, to make it more comfortable to use for people who are used to other common instant messengers.

The most important changes are the following:

It is now available on Google Play, it might appear on F-Droid too in the future.

#schildichat-android:matrix.org is the place to find out more.

As per this issue comment, I was asked to inform this channel of the new AppImage for the Element Desktop Matrix Client. 🎉. Interested users may get them on appimage.github.io or on my releases page, offering Continuous builds (refreshed every day) for stable and beta builds 😃

This is forked from FluffyChat:

I have changed the archive feature. Added a splash screen. Further simplified settings. Login times work faster compared to FC. I am connecting it to my Jitsi instance. which operates p2p and is completely analytics free. Message notifications are analytics free. It will eventually be an extension to a videocall app developed by myself. It adds variety to the ecosystem. It strictly follows license rules, credits the developers and links to their wonderful work. And it is a great thing to do in my spare time ☺️

This week, we started a new sprint to finalise remaining rebranding and iOS13 SDK issues. Note that have a plan to make CallKit and PushKit back!

In parallel, we have finished to setup the CI for the 3 iOS projects.

Hey all! I built yet another bot library. matrixbz was built with the intention of making it easy to draft matrix bots. Check out the github - I've added some examples where you can build a bot in ~10 lines of python code. matrixbz features:

Check out the package.

We have released version 0.0.1 of the ruma crate! Thanks to all of our contributors!

Besides that and continuing to refine ruma-events, here are some other highlights over the past couple weeks:

Hemppa the bot is a general use bot that has lot of modules for various uses and super easy API to create more. Hemppa received support for Mastodon. Now you can login to your Mastodon account and send toots via Matrix. Next major feature would be to subscribe to hashtags and users and get notifications to Matrix rooms. https://github.com/vranki/hemppa#mastodon

The Hackers on Planet Earth conference went almost entirely self-hosted this year due to not being able to hold an in-person event, and used Matrix to go virtual! hopeless was the robot-heart of the conference, providing community+room ACLs for attendees. The bot also has a bunch of other features including:

Many thanks to the nio-template for existing, otherwise this wouldn't have been possible!

Wonderful! I plan to give it some more love soon, including some docker magic to make it easier to run.

If you ever have any feedback about improving it, feel free to post it in #nio-template:amorgan.xyz :)

This is just a stupid simple bot based on T r a v i s R's matrix-bot-sdk-bot-template that forwards alerts from a Synology DiskStation NAS to Matrix room(s).

It's on GitHub and Docker Hub