No new Matrix Live this week, we have Open Tech Will Save Us #5:

Also, I recommend Matrix Live from last week, with Timo and Matthew discussing Conduit/Rust/Homeserver dev. Conduit is absolutely motoring, as you will read below.

In completely unrelated news to my earlier K8s updates, Linköping University has now soft-launched Matrix for use both internally - and hopefully with other universities and institutions in the future.

Se the k8s updates from Ananace below. Is this the first .se university offering Matrix? Also, great hostname!

We've finally opened up https://translate.riot.im/projects/matrix-doc/sas-emoji-v1 to translate the emoji used by clients to ensure that users are securely verifying each other. The idea is that clients should always have a consistent name for these emoji, even if developed by completely different teams. If your client supports encryption verification and has translations, please transition to using matrix-doc for your translations: https://github.com/matrix-org/matrix-doc/pull/2728 has some details, and #matrix-spec:matrix.org would love to help out. 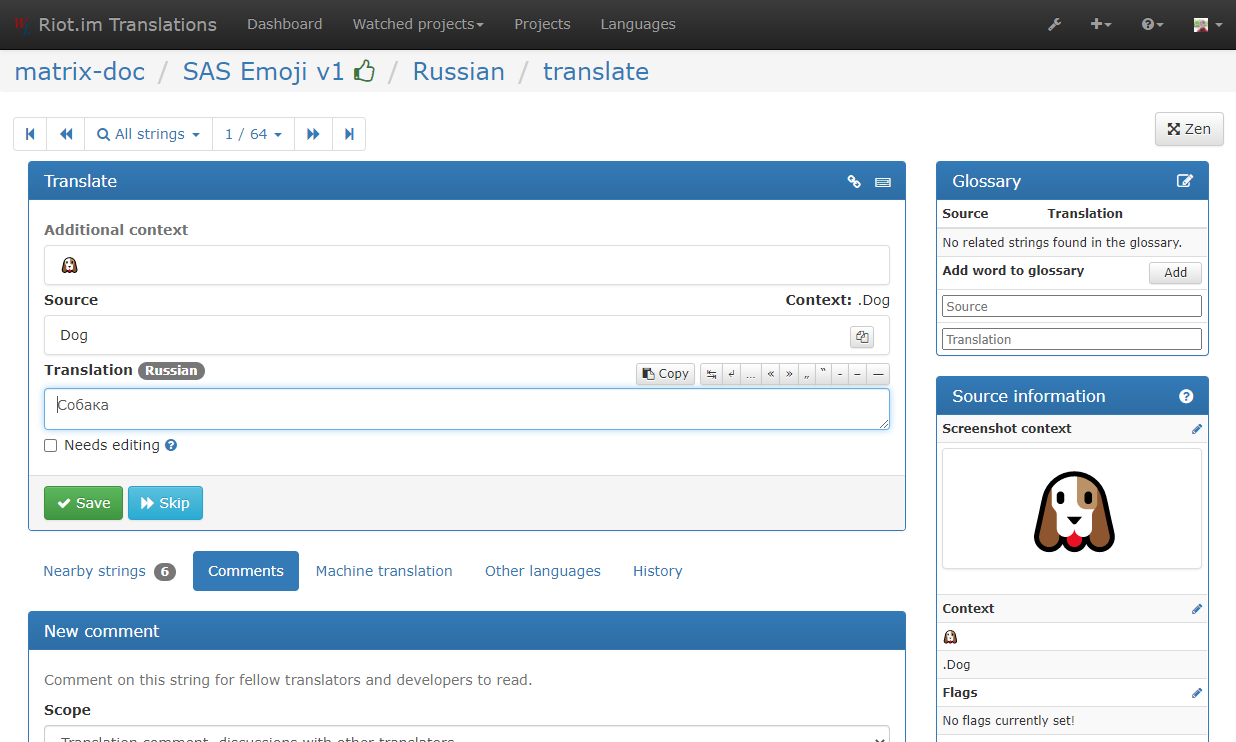 Some of the team was on holiday last week, hence the noticeable lack of progress 😇 In terms of Spec Core Team MSC focus for this week, we're keeping on with the same two as last week: MSC2674 (aggregations pt1: relationships) and MSC1544 (QR code verification). 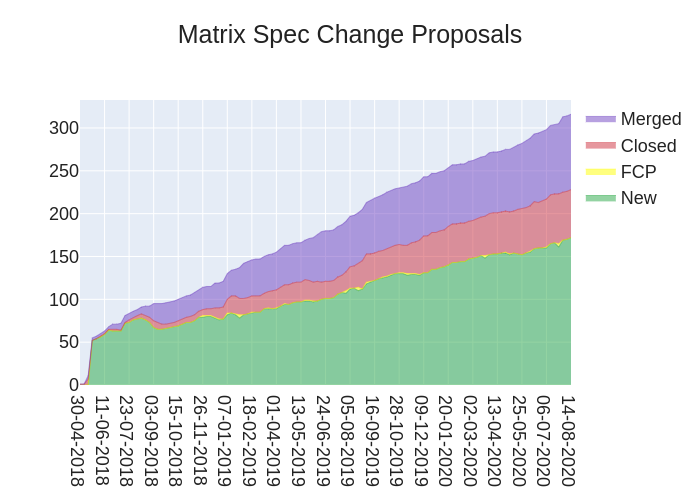 End to End Encryption with matrix

We have a new RC out, edited highlights include

Aside from that Erik has been continuing with sharding the event persister, this is a big job, so we’re still a little way off having something to ship, but I’ll keep you updated.

Big news this week, after spending a good chunk of time trying to rework notifications to make the UX more intuitive, we have decided that the best (and only) way forward is to completely rethink how the push rules work. Rich is currently redesigning the whole thing, and once done we’ll resume on the client side.

Having spent much of the past 3 months trying to improve the performance of large scale instances we will soon start looking at improving the out of the box experience for smaller installs and are in the early stages of thinking about what that might look like. I’ll update more over time, but the two obvious use cases to target are

Our (relatively small) changes to logging in 1.19.0 are the first signs of this shift. We still need to ship event persistence sharding and also move more functionality from the main process (dependent on async/await), but once done it clears the way for new projects.

anoa brought it to our attention that this graph looks like a "ocean-beach waterline dropoff".

This week I worked a bit on federation! Last week we were able to query room directories over federation; This week I looked into what's needed to join one of those rooms:

After implementing all those things, I could actually see Conduit's join event on Synapse! 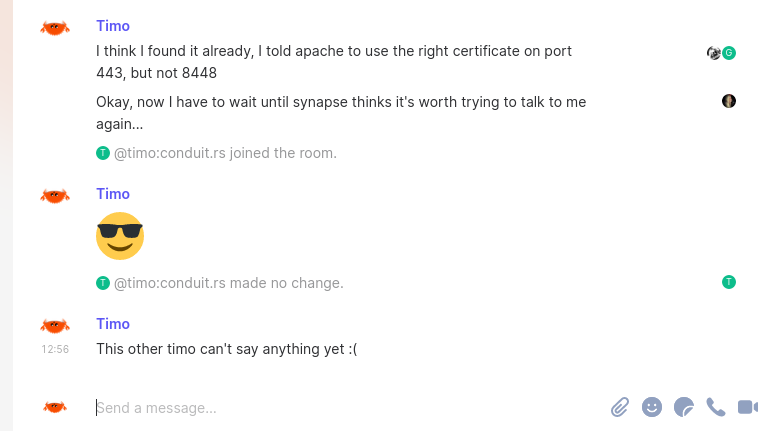 Of course a lot more work is needed to make this really work,

like creating the room on the Conduit side and sending and receiving federation transactions, but this is a start.

This week we've been closing off some of the remaining tasks for end-to-end encryption and working on tasks from our beta milestone task list.

As always, feel free to join us in #dendrite:matrix.org for the latest!

Sytest has now been updated to allow skipping tests for endpoints that have been deprecated in the spec. This may be useful if you are writing a homeserver and have no plans to implement deprecated endpoints, e.g. /initialSync or /events.

Use the command line parameter --exclude-deprecated when starting Sytest to skip these tests!

Synapse integration had been updated to 1.18.0

Element Web integration had been updated to 1.7.3

Just pushed some WIP (v0.1) charts for both Synapse and the matrix-media-repo project, written with Redis, workers/sharding, PVC constraints, and other large deployment thoughts in mind.

To expand on my earlier TWIM, the charts for Synapse, media-repo, and now element-web are all being used in production now so they are also respectively receiving their 1.0's

So, we've been silent for a bit, but that doesn't mean we haven't been busy, so I have a little bit of a bigger announcement to make today:

Trilene implemented voice call support in Nheko! We just merged this and you can try it out now!

Some caveats apply at the moment, but will be resolved in the near future:

Big shoutout to trilene for implementing all of this! I can finally call people from Nheko, which is super awesome!

This was the first of the bigger features, that have been cooking for a while, in the near future we should also finish the new event store, which reduced memory usage and provides some kind of offline support, and Chethan will probably finish the first iteration of cross-signing soon too. After that we'll focus on the smaller features again. ;-)

We are still fixing issues following the Element release. We are also working to add Jitsi conference call support.

We have exported a first beta version of the SDK from Element Android. It is available here: https://github.com/matrix-org/matrix-android-sdk2 and can be integrated in any Android app as a regular gradle dependency. We will update the SDK after each release of Element Android.

SchildiChat version 1.0.4-sc.12 schould be up in the Play Store soon.

It includes following changes since the last TWIM:

Some regular readers might remember, in the past I've put a few entries here about a side-project called Brawl. Two weeks ago, we took Brawl and started building a new client on top of it code-named Hydrogen.

As the name implies, Hydrogen tries to be the lightest Element. It is written entirely in vanilla javascript (no React, no Webpack) for complete control, structured as an MVVM app, leveraging the raw performance of indexeddb. On huge accounts where Element-web uses up to 1GB of heap memory, Hydrogen sips away with a mere 15mb. It is very early days though, and Hydrogen has very little features: you can receive and send unencrypted messages and that's it.

Hydrogen also aims to support a wider range of browsers, from IE11 (particularly for orgs with locked-down machines) all the way to a fully featured PWA that works well on mobile. We should also be able to easily add progressive loading, which proved hard in the past.

Another goal is to make it easy to embed parts of the app (like the room view) into another app or website. It could also be really nice to have a place to play and experiment with new tech for element proper - much as Dendrite has influenced Synapse.

As mentioned, it's early days, and lots of things are missing or broken, so please don't file any issues yet. Feel free to play around with it at https://hydrogen.element.io/ though! 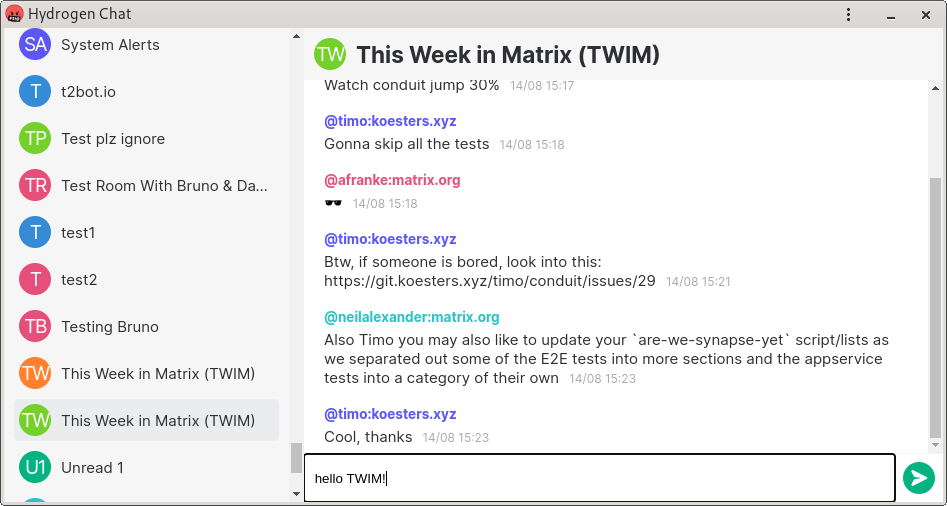 This week, we've completed some of the tasks from the sprint: https://github.com/vector-im/element-ios/milestone/38.

As a highlight, we've released a new TF with PushKit & CallKit back.

Lots of exciting things happened in Ruma this week:

This week, we have gotten help from a few new contributors:

Thanks for your help!

If you're interested in contributing, join the party on GitHub or

Support for Ansible collections from Famedly

There's news from ansible land! Ansible recently introduced a new packaging format, the "collection", and we've now started moving our ansible content into collections. This means the matrix modules I twim'ed a few months back are now easier to install than ever before, and the synapse/element roles are included in there as well (thanks to madonius for the contributions there). The roles have been regularly updated for a while now, and the element role isn't even called riot anymore! You can get the collection on Ansible Galaxy, with the source being available over on GitLab. In case of any questions, feel free to hop over into #ansible:famedly.de

If Ansible were a film franchise "Ansible: The Collection" would be the long awaited boxset.

cody - the REPL for your matrix room - recieved support for unit conversions this week. This is done by implementing GNU units as a language.

opsdroid is getting close to a release with the matrix connector rewritten to use the matrix-nio library. If you are feeling brave and want to help us iron out any bugs before the release, please install the master branch and test it out for your matrix bots. Please report any issues on the GitHub issue tracker or come talk in #opsdroid-developers:matrix.org. Hopefully, a release with this and lots of other goodies will be coming in a couple of weeks.

I’ve created a compact and portable home server based on Matrix protocol, it’s a piece of hardware which is easy to use and set up. I’m working on a new client APP similar to other typical messenger GUI, but this server we named it ‘Privee’ supports any messenger developed with Matrix protocol. I’ve launched a campaign on Kickstarter this week, please come and support us! Thank you! https://www.kickstarter.com/projects/privee/privee?ref=beibnw

Privee is an interesting project alright! The project creators are based in Hong Kong, and are working from a desire to have more control over their communications. The plan is to run homeservers on a small computer physically located with the user, similar to plans outlined by NovaChat.

This is an early-stage project (hence starting on KickStarter.) While exciting and ambitious, I encourage everyone to do their own research! Learn more and chat with terry_hello (who has done a good job handling questions already!) in #Privee:matrix.org.