Nico, one of the Nheko client maintainers, discusses the state of the project and shares various opinions about Matrix, chat clients, physics, the local weather and so on.

In terms of Spec Core Team MSC focus for this week, MSC1960 will be the only one on the list. The two MSCs from last time will be put aside for this week while we focus on implementation. 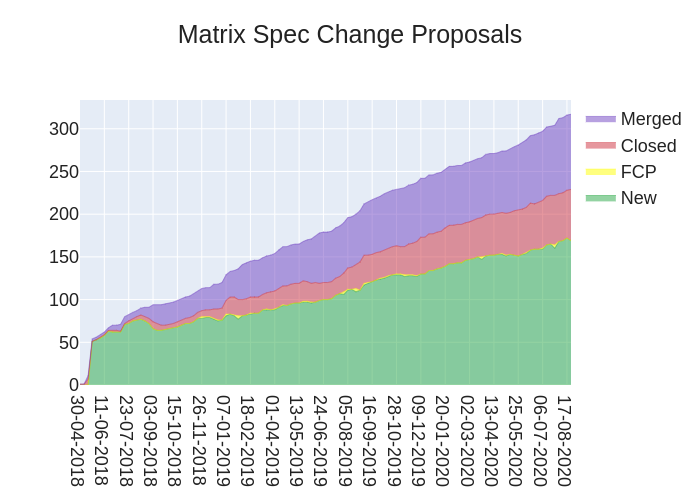 This week we have largely been working on bug fixes and performance issues.

As always, feel free to join us in #dendrite:matrix.org for the latest!

While work on federation is going on in the background, here are some other things we worked on this week

Also check out the Romeo and Juliet Benchmark!

This week we added some more federation readers to matrix.org which should noticeably improve federation lag.

Patrick has continued on with the async/await-a-thon and we are starting to enter the home stretch. Of the things we care about only runInteraction remains. Once done we can get on with profiling the main process.

On the sharding side the last big milestone is to get the event persister to shard. I know this comes up every week, but we now have a rough working implementation for non-backfilled events. Next steps are to get backfill working, get the tests passing, go through review and then ship. I asked Erik if it would be live on matrix.org within 2 weeks. He didn’t say, at least I didn’t hear him say no…> Aside from that Rich is working on the push rules redesign, the next steps are to design the APIs in more detail and then make a formal spec proposal. Brendan is also in notifications land and his work on room unread counts is going through final review.

Finally, Andrew has been working with Sorunome to dust off the knock feature, both on the spec and the Synapse side.

This week I created the first(?) Matrix server benchmark and ran it on Synapse, Dendrite and Conduit. The test will go through the entire Romeo and Juliet play and create users for each character and sends messages for each line they say.

The results are very interesting: 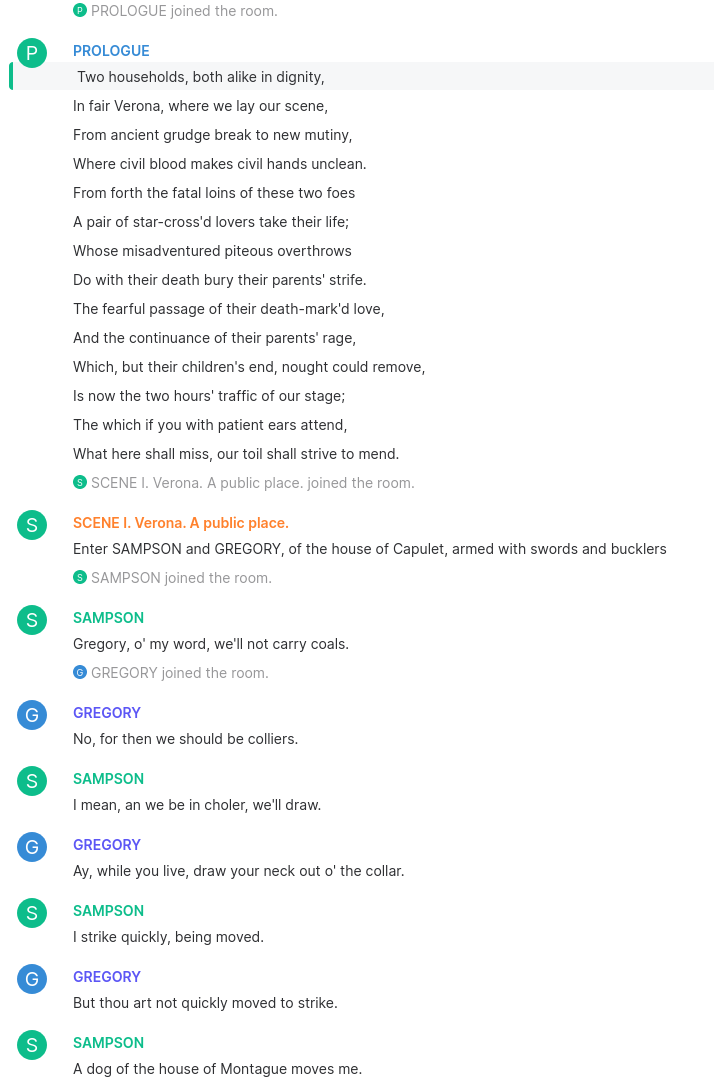 There is some question here about how federation and state resolution will affect performance on these tests.

There is rather a lot in this section this week (see also Ops 🛠 section below.) I'll consider making this a more structured (table?) feature in future.

Hello! Just recently I made public an SELinux policy module I developed for Synapse. This policy is one I developed early on during my trip down the SELinux rabbit hole, and I have been using it in production for some time. At the moment, this policy module is built for the Gentoo SELinux policy (not RHEL/CentOS/Fedora) and does not currently have systemd support, nor has it been tested in all environments, i.e. with workers. I am publishing this policy in the hopes that it will be useful and I am open to any contributions, even those to help tighten the policy if possible. Finally, I have also made public a policy module for coturn, which I am also using in my own personal environment under the same conditions. Both the Synapse policy and the coturn policy can be found on Github. Thank you!

The ansible collection famedly.matrix has seen another release, 0.1.2, which updates the element role to 1.7.4 and the synapse role to 1.19.0. As always, get it from Ansible Galaxy, source from Gitlab, and for any questions join #ansible:famedly.de.

Just pushed the 1.19 tags for the K8s-optimized Synapse image, as well as an updated chart version for it that also takes advantage of the added /health endpoint.

Element 1.7.4 and Synapse 1.19.0 have been packaged for Void Linux, packages are already available from mirrors.

v2.5.0 of dacruz21/matrix-chart has been released with Synapse 1.19 support and some new configuration options.

As channels are really popular in Telegram, I wrote a quick and dirty program/bot which can mirror (text and image) public Telegram channels to Matrix rooms. This should make it easier for Telegram users to consider a switch.

Making the rooms read-only via permissions prevents messages from users. It provides a good basis for someone trying to make a real 1to1 mirror. Please fork this project and host some channels publicly ;)

This project is functionally quite different from the more established mautrix-telegram: it is purely designed to mirror content from Telegram public rooms.

Hello all, I'm going to be quick off the mark and announce matrix-appservice-irc release 0.20.1! This release contains a ton of bug fixes and quality of life changes that you never knew you were missing. Please update and report back in the usual channels as always. Thanks!

I've been working on trying to finish the event store (when I wasn't distracted by video calls with some people). This should allow limited offline use and reduce memory use as well as allow some other features in the future. If you want to try it out, you can build this PR or try out the nightlies with new-event-store in their name.

If you decide to try it out, backup your cache or at least BACKUP YOUR ENCRYPTION KEYS! I won't be responding to feedback immediately, since I am currently hiking, but I should get to it this weekend or next week. Come discuss it in #nheko:ocean.joedonofry.com, if you have some feedback or issues.

We are still fixing issues on Element Android. Hopefully we will release version 1.0.5 of the application and of the Matrix SDK in the coming days!

Element Android 1.0.5 has been published on the beta channel of the PlayStore. If everything is fine it will be pushed to production next week. I've also published SDK v1.0.5, and push translations of the PlayStore home page of Element to German, Chinese, English US, Hungarian, Portuguese (Brazil), Russian, Slovak, Swedish and Ukrainian.

This week, we improved customisation for forks. We add possibility to customize default HTTP headers (like "User-Agent") and improve login and room settings screens customisation. We started to improve project documentation. We also made some fixes like fixing registration validation link in email.

Hydrogen is a web-based client designed to be very lightweight, and with few dependencies. Anyone who wants to discuss Hydrogen can join #hydrogen:matrix.org.

If you have checked out hydrogen before, you'll need to clear your session (the little clear button in the session picker) to get correct avatars and display names everywhere.

Next week I'll get started on E2EE, which should make the project a lot more useful. I'll look into leveraging the nice rust matrix-crypto-sdk for this. 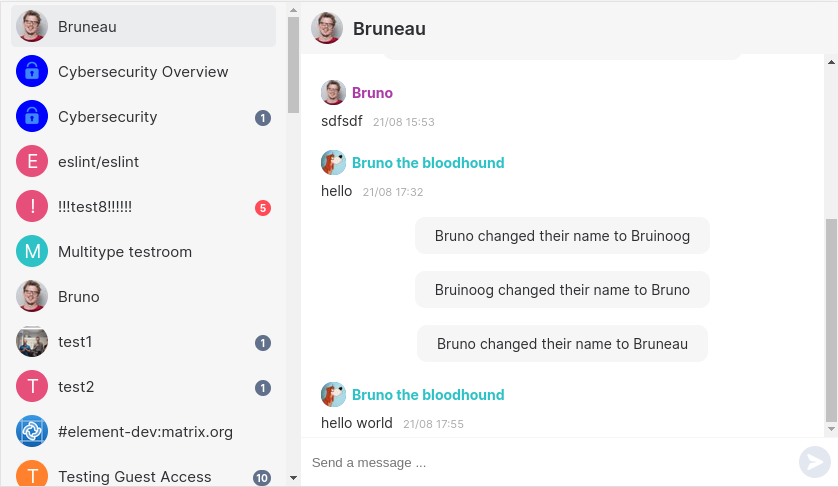 miruka hit us with a late breaking update about Mirage! 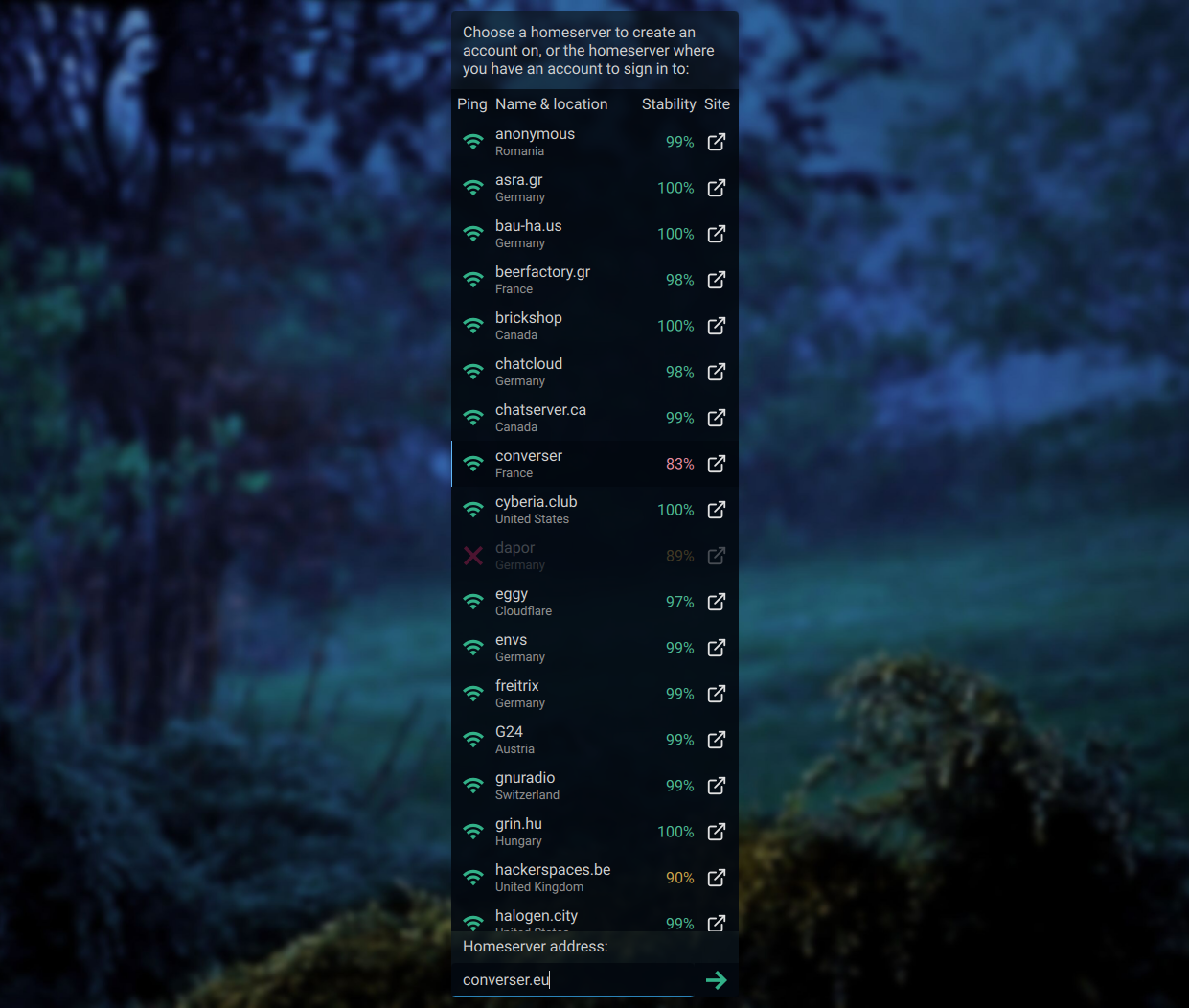 We wanted to take a little bit of time to show off a state resolution library for Ruma, courtesy of @DevinR528 and @Timo. Ruma has a new crate to make resolving state easier, state-res! The goal of this crate is to be the base for federation, it provides the necessary utilities to resolve state, sort power events (reverse topological ordering), sort events (based on mainline depth), and a lot of event authentication functions. It is still in the early stages of development, but will be hopefully proved out in Conduit.

Other things that happened this week:

Very impressed that these features are landing in Ruma first, with the intention of getting them into Conduit.

Just pushed version 2.1.1 of the Ruby Matrix SDK, mainly including a couple of fixes for various minor issues.

matrix-docker-ansible-deploy now makes it incredibly easy to use rust-synapse-compress-state to compress the state groups in your Synapse database.

See our Compressing state with rust-synapse-compress-state documentation page to get started.

Residents of Germany can apply for the Prototype Fund until the end of September. They are looking for new open source ideas or features and fund about 20 projects twice a year with 47,500 EUR for six months (starting in April for this round).

Previously funded chat-related projects include Briar and OpenPush. It would be great to see a project building on Matrix.