In terms of Spec Core Team MSC focus for this week, we're taking off MSC2674 and MSC1544 while the author works through feedback, and instead looking at getting widgets in line.

The spec for widgets has so far lived on a collaborative document that hasn't been updated in some time. As a result multiple, separate implementations have sprouted. We'd like to nail this down. So the focus for this week will be: MSC1960 (widget auth mechanics) and MSC1236 (general widgets). 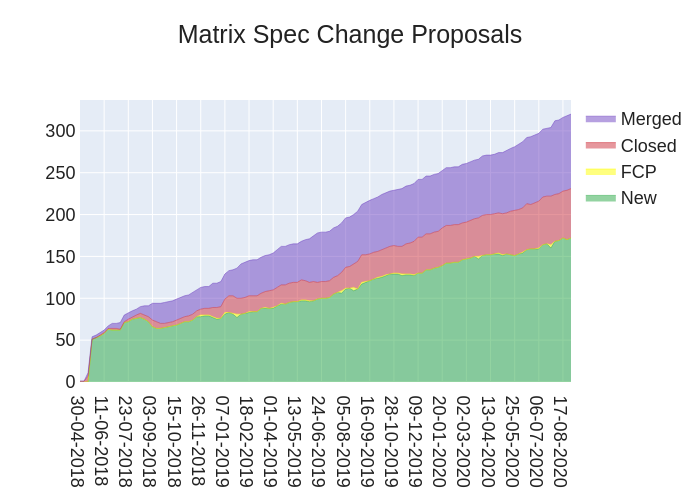 The coding phase of Google Summer of Code is over! That said there is still a bunch of stuff to do, code is still appearing and we're now entering the time of many forms to fill in in order for people to get paid.

A little pre-emptive, but wow it's been a good summer! SIX students, all did well!

GSoC coding is over and there's now an async/await ported matrix-ircd! Before merging that into master, it would be nice to have it tested a bit more. To install it, you first need Cargo, Rust's package manager (Installation). With that set up, just run

Once matrix-ircd is installed, you can run it and connect to the locally spawned server with any IRC client.

For the GSoC project HTML embeddable matrix chat this week -

More news to come from this project - going to be used in a really exciting live event in the near future. Arnav has accidentally found a niche. :D

One more thing: This project needs a new name (riot-embedded I don't like.) If you have ideas you can fling them at arnav-t or post in #twim:matrix.org.

This week has mostly been focused on beta milestone tasks and bug fixes. Changes this week include:

We've also updated some of our documentation and created a whole new set of easy first issues and medium to hard issues for contributors.

If contributing to Dendrite sounds like something you would be interested in, please take a look at these issues and join us in #dendrite-dev:matrix.org! There's also #dendrite:matrix.org for general Dendrite chat.

Some new features this week!

Also check out our new website (https://conduit.rs) if you haven't already.

This week Erik has been working on sharding the Event Persister worker as we aim further for horizontal scalability for Synapse. Some of the complication comes from ensuring that sysadmin's don't misconfigure things where multiple event persisters persist events in the same room.

Patrick has been continuing on the async/await train and has just submitted the final PR which async's our runInteraction method - the one that most database calls go through. Synapse is nearly 100% async! He's also been submitting a flurry of shadow ban PRs, which will be another powerful tool for moderation.

Brendan and Rich are continuing to work on the Notifications rewrite, with Brendan finishing up unread counts, and Rich polishing up designs for the new replacement for push rules.

Andrew (who dat? - ed.) is continuing to work on the knocking MSC and has fleshed out the CS and SS details. There are still some open questions though, so please give feedback if you notice anything off!

Finally, Olivier has been working on making sure you get your missed messages when your homeserver has been offline for a while, as well as various Sygnal fixes and matrix-synapse-ldap3.

Element Web integration had been updated to 1.7.3 (1.7.4 available in branch testing)

Just pushed an update to my matrix-synapse chart, fixing the volume permission configuration - for those who want to run Synapse as non-root without using a storage class that supports setting rights based on fsGroup

Just pushed the 1.19.1 tags for my K8s-optimized container image, and a new helm chart version to go with it.

Did you know that Ananace is running a Matrix server for Linköpings universitet?
Another True Fact: "universitet" appears to be Swedish for "university".

I recently published a new matrix <-> mattermost bridge - matrix-appservice-mattermost. The new bridge already supports many features and is rapidly improving, with the current focus being setting up proper integration tests.

New bridge! This is actually really fully featured considering that we've only just heard about it! Looking forward to seeing more from dalcde and team in future.

Some small updates on Daydream:

Also the landing page at https://daydream.im got a fresh new design :)

Check it out at: https://app.daydream.im or join our Chat at #daydream:nordgedanken.dev

Honestly I didn't realise Florian was a setting in the power levels. Is this in the spec? Very good seeing Rust SDK getting such usage, we will see more from this project I hope!

A multi-account Matrix client that allows you to authorize webapps to access parts of your account, designed with collaboration in mind.

This is the webapp I've been talking about for a while that allows webpages limited access to your account. Currently, apps can view the name, avatar, alias, and type of a room that's been opened with the app, and that's just about it.

The big interesting thing about mxapps right now is the architecture. Just about all of the logic is running in a shared worker. This means that you can duplicate as many tabs as you want and it will all act as the same client. It also has multi-account support.

Features coming ~soon~ at some point will be full state event support and easy-to-follow docs on how to make an app, plus Vue plugins to make development really easy.

You can checkout the live version on mxapps.kb1rd.net, but it is a bit useless...

There are some work-in-progress docs on the structure on docs.mxapps.kb1rd.net

What a great use of workers! The possibilities for this are really impressive...

Released 0.0.34 this week with some fixes to the room list sorting and fixing several crashes. If you clear your session, it will also sort low priority rooms at the bottom of the room list, even if unread, making it a bit more usable until we add more UX refinements to the room list.

Most of the effort this week however has gone into working on end-to-end encryption, having investigated using the rust-sdk for a couple of days, and now looking into a custom implementation based on libolm. This is well on its way with key upload working and device tracking nearing completion.

Getting e2ee will make this a very compelling client! Remember to watch Matrix Live with Bruno above. If you've watched it, remember we have 100s of episodes of Matrix Live to catch up on!

I just merged the new event store a few days ago. This means Nheko now doesn't keep messages in RAM! Everything is stored on disk and mapped into memory from disk. This may reduce memory usage a tiny bit, but may increase latency while scrolling a bit. Try it out and give your feedback!

For the developers reading this, I collected some ramblings on my blog here: https://blog.neko.dev/posts/nhekos-event-store-v2.html . Yes, I designed that site when I was like 15, I know the dark theme is a bit too much... Just use Firefox and the alternate stylesheet for light mode! Anyway, I'm very interested to hear how other clients implement their event stores!

Element-Android v1.0.5 has been released to the PlayStore. We are now working to improve user experience with 1-1 calls. We will add support to add and remove emails to your Matrix account, and we are still fixing bugs...

We are always fixing bugs!

Manu has been working hard on iOS:

This week, we made 2 release candidates available through TestFlight. New features are :

A huge thanks to the community for the feedbacks. It helped us to discover issues like a crash in background due to PushKit. The coming TF (1.0.7) should fix all of them

A PR has been created for cross-signing and SSSS support! It also supports accepting in-room verification requests and will soon also support creating them, after which it should be ready for reviewing. Afterwards, with some minor changes to clients using the library, cross-signing should be available.

A Matrix bot using the library matrix-nio and Docker (specifically aiodocker) for running sandboxed code, allowing users to write their own factoid commands which can perform any task required. The bot launches a new instance of itself every time it is invited to a room, where it can then be configured for that channel by a management website. There is also a web IDE for the factoids, so you can edit and test the bot's output. 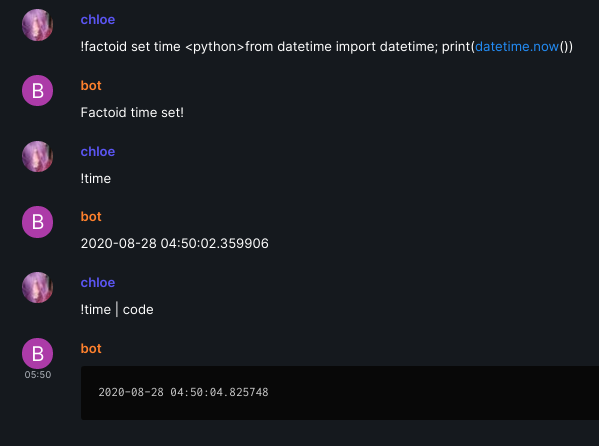 Cool! There are so many bot creation systems for Matrix now!

There is one month left until Hacktoberfest🎃! Prepare your repos now!

It's a great time to get friends and newcomers involved with open source and your projects. During October, merged PRs to any(!) public GitHub repo will count towards a person's score. With four PRs, they get a very neat looking t-shirt from the organizer DigitalOcean. They can also ask for a tree to be planted instead.

Matrix benefits from Hacktoberfest, but do keep in mind that this is a commercial project from DigitalOcean.