Next step in world domination

The Matrix service at Linköping University has now passed its soft launch state and headed straight into full and proper deployment territory. (Though we're still not being overly vocal about it, don't want to crash our deployment on day one after all.)

They're simply announcing it on TWIM, perhaps the most high-profile place in the world!

We're doing a little bit of advertising of it to computer clubs and the like though, to slowly build up the users.

And just to add another slight update: already we have at least one conference planning on trying out the new Matrix server as well, so the user count might just end up exploding soon anyway.

sorunome asks for attention on MSC2545:

As a lot of people in TWIM were originally interested in it, soru just wanted to say that MSC2545 (emotes) is no longer WIP, it is ready for review

In terms of Spec Core Team MSC focus for this week, we're sticking with the widget theme, but also adding something new. Travis is writing up a mahoosive widgets PR in addition to some widget MSCs. We're also adding on MSC2753 (peeking /sync), MSC2444 (peeking federation), which will both unlock some very exciting upcoming features (such as x-as-rooms)! 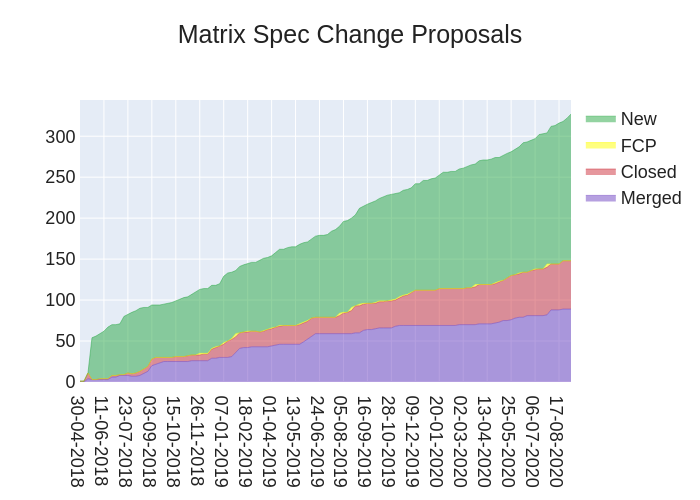 Erik has made an initial, naive implementation of a sharded Event Persister worker - the non-sharded version currently being one of the biggest bottlenecks on matrix.org right now. It still needs a bit of polish to be production ready, and Sytest will need some updating to support testing it, but otherwise progress is looking good!

Brendan is polishing his unread counts implementations, while Rich is writing up the push rules replacement tech in an MSC. Rich has also been optimizing the device code in Synapse to both simplify the code, as well as cut down on unnecessary device data being sent over federation.

Patrick has finished converting Synapse's database code to be fully async! This has the benefit of making profiling the matrix.org Synapse process much more sane, and we're already starting to find a few little places where Synapse is burning CPU unnecessarily! Now, Synapse won't be fully async'd until Twisted itself is, and we drop support for older Twisted versions that aren't, which is not soon. However the majority of the code that developers touch and that is executed being async has massive benefits either way 🙂

Andrew has been working on having a confirmation pop up after users click the link in their email, to help prevent phishing scams. He's also trying to finally make Synapse spec-compliant in accepting identifier dictionaries during user-interactive authentication.

Olivier has been continuing to help Synapse recover missed messages better after it has been offline for an extended period of time, as well as various fixes to push.

Expect a fresh release with all these changes soon!

As someone who had my own server outage this week I'm looking forward to seeing this!

This week we have been continuing on our bug-hunt mission and have been working on refactoring some significant parts of the codebase to simplify the API surfaces and avoid race conditions.

Last week, we updated some of our documentation and created a whole new set of easy first issues and medium to hard issues for contributors.

If contributing to Dendrite sounds like something you would be interested in, please take a look at these issues and join us in #dendrite-dev:matrix.org! There's also #dendrite:matrix.org for general Dendrite chat and updates.

Element Web integration had been updated to 1.7.4 (1.7.5 available in branch testing)

Introducing a new bridge to the family, tomsg-matrix!

A friend of mine preferred using his own chat protocol, but having a chat protocol is useless without having people to talk to. Since I prefer using Matrix I thought it would be a fun exercise to try and create a bridge using Rust.

The code for tomsg-matrix is open source, but be prepared, I hastily pushed it to GitHub without cleaning it up.

Come chat to us over at #tomsg:lieuwe.xyz, hoping that it doesn't break. :P

Making your own chat protocol in a world of well established options seems, frankly- oh right.

We are currently working on an Android-App to use an old smartphone as SMS-Gateway for matrix-sms-bridge, because using gammu in production (>50 SMS/day) seems not to be very reliable with our USB-modem.

im_sender_service, for zabbix bridging and more

I create service for sending corporate information: some service (for example zabbix) can send message to this service (over http-api) and service will create room (if needed), invite user and send message to this room. Service will change status of message in his database to readed when user will read this message. Also service can send any changes statuses of this message by callback url. Editing old messages also supported: for example zabbix can send UID problem to this service and it is will edit old "problem message" to "problem resolved".

Ditto is a Matrix client for iOS & Android

Ditto development is back from hiatus!

I'm currently in the process of rebuilding Ditto - partly to incorporate rn-matrix, and partly to support a WEB VERSION

The new repo can be found here (https://gitlab.com/ditto-chat/ditto) (there's a new repo mostly because getting react-native-web to play nicely with the rest of the app was a challenge, to say the least)

As a sneak peek, enjoy this rough version (https://ditto-test.netlify.app) of Ditto for web :)

Expect to see what I'm calling Ditto's 2.0.0 drop on TestFlight and Google Play in a few weeks.

Good progress this week, I just got end-to-end encryption working. The code still needs some cleanup and polishing to be able to release it in the wild, but expect a release somewhere next week with E2EE enabled. 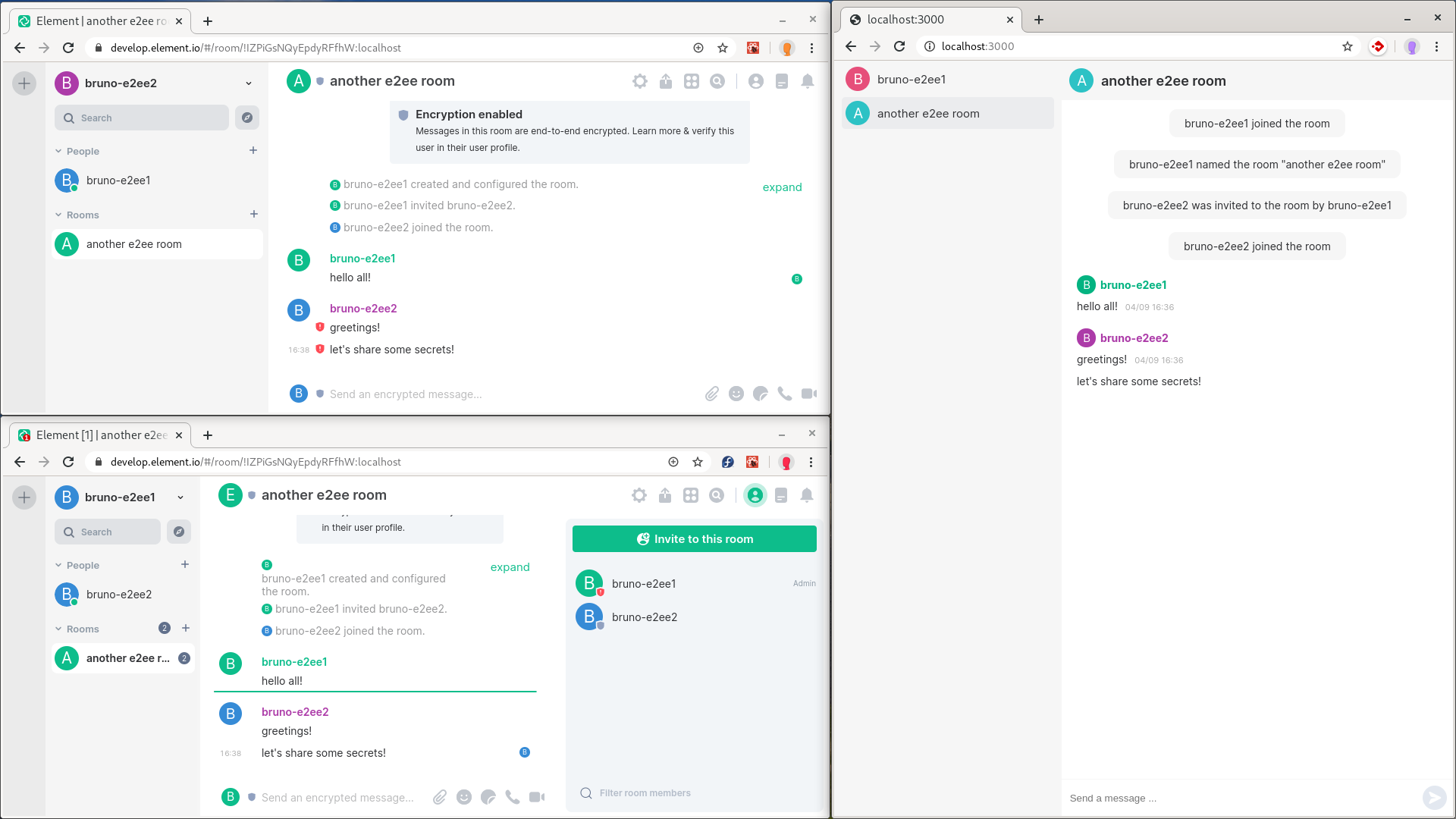 gomuks now supports importing and exporting message decryption keys. It even supports exporting the keys for a specific room, e.g. for sharing them with someone else. To help with sharing exported key files with someone else, gomuks also got support for uploading media.

v0.2.0 was just released with these features!

NovaChat is a new Matrix-based desktop client that aggregates all your chat networks into one app. We now have integrated bridges for Whatsapp, Twitter, Telegram, Hangouts, Slack, Messenger, Android Messages (SMS), Skype, Discord, Instagram and IRC.

Sign up for the NovaChat beta. Or send me a DM @eric:nova.chat! 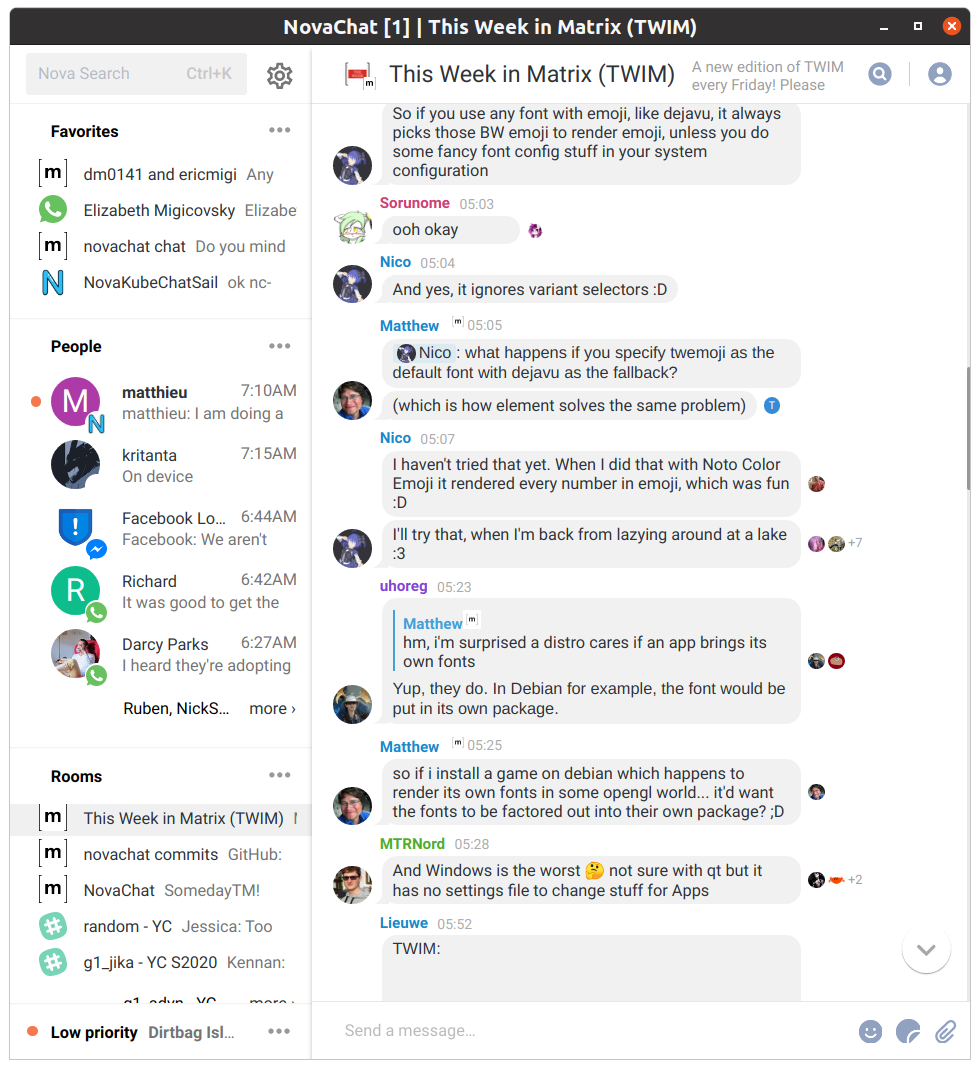 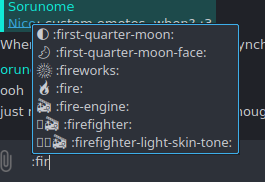 IMPORTANT: Due to legal reasons (USA cryptography export), end-to-end encryption has been disabled in the google play and ios builds for now. They will be re-enabled once we got all that figured out.

The F-Droid builds still have e2ee. As the play store and fdroid builds use the same build signature, you can simply install the fdroid version over the other one. More information on that here: https://fluffychat.im/en/fdroid.html

I removed SchildiChat from the Google Play for now, due to the complications of providing encryption-capable software from US servers. Huge thanks to the FluffyChat team for providing insight into their investigations concerning the US export regulations!

On the positive side, SchildiChat is now finally available on F-Droid from the official repos.

Furthermore, I have set up my own F-Droid repository, where you can get updates that are compatible with the Google Play Store variant and which support push notifications.

On the implementation side, I can report the following:

In parallel, we started to modernise the AppDelegate class, the entry point of the app. This is the very first step of several improvements we want to do (this is not only to rewrite it in Swift).

We have just merged a few big PRs to develop: add emails and phone numbers to Matrix account, rework of upload attachment management, and other stuff related to 1-1 calls. It will live on develop for the week-end and we will prepare the release v1.0.6 at the beginning of next week.

rn-matrix is a React Native SDK for matrix

Built on the matrix-js-sdk, this NPM package will help any React Native developer drop matrix into their app.

Been working on this since the beginning of the summer - this package is split into two, one for the data and one with default UI components for those who want to drop chat into their app quickly (not required).

Would love feedback on docs, installation, and usage, so try it out and drop me a line!

NB, this update should be read together with the Ditto update above

Over the past couple of weeks, jplatte has been hard at work making sure we can introduce new fields to request and response types as non-breaking updates. Thanks to @nicholaswyoung, consumers can opt-in to breaking changes to ensure compliance with the spec on each update.

Besides that, we implemented another endpoint for the Federation API, bringing us up to 20/31 endpoints implemented.

matrix-docker-ansible-deploy can now help you set up matrix-registration - an application that lets you keep your Matrix server's registration private, but still allow certain users (those having a unique registration link) to register by themselves.

See our Setting up matrix-registration documentation page to get started.

I did a talk on Matrix bridges at the annual Free Open Source Conference.

The interest was high. Some didn't know, that bridges exist in Matrix.

!!! Well thank you Oleg for letting them know.