Open Tech Will Save Us #6

Open Tech Will Save Us is also available in audio form as a podcast in all the usual places!

We had a bumper summer this year, with SIX students successfully completing their projects. So far three project reports have been published:

Expect to see the next three reports next week.

Since we suddenly have multiple projects that've separately gone on to trial our new and shiny Matrix-on-location for multiple respective use-cases, from conferences to anonymous - encrypted - support chats, we've had to end our soft-launch period very quickly.

For minutes, confusion reigned in the chat about just what this meant! Fortunately, clarity arrived:

To clarify; Ending the soft-launch period means that we've now gone on to a full launch, with public announcements and everything else that includes

In terms of Spec Core Team MSC focus for this week, the widgets spec and related MSCs are still being completed, however is formally removed from the focus list for this week. In its place we've put something in a very similar vein: MSC1960 (OpenID Connect exchange for widgets).

We had another long overdue Spec Core Team retro this week. On the whole it felt very productive, and we've hopefully helped identify some key issues and actions going forward to help internally organise the way the team spends time on MSCs (read: unblocking review progress from the team).

We're still working out our exact strategy asynchronously at the moment, so expect more details to follow soon. 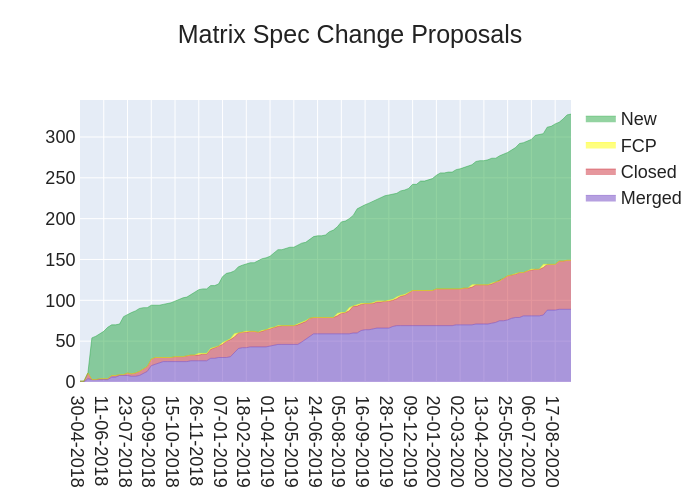 This week we put out a new release candidate for Synapse 1.20.0, highlights include shadow ban support, more async/awaiting and unread message counts being added to sync responses to support upcoming notifications work.

Aside from that Erik has been continuing to get event persistence sharding ready for shipping. He already has a working version, but currently all workers will run at the speed for the slowest instance. Once that is fixed we will put it on matrix.org to see how it performs.

Patrick has finished up on asyncing all the things, and is now studying flame graphs to figure out where all the cycles on the main process are going.

Andrew has been taking a look at the knocking MSC, expecting concrete progress in the next few weeks.

Brendan has been working notifications support and is currently in VoIP land helping Dave on trying to level up our VoIP support.

Finally Oliver has dusted off his TURN tester from last Summer to get it working before he returns to university. The idea is that it will act a bit like the federation tester for but for TURN configuration.

Hi everyone, Devin R and I are working on state resolution, hopefully we have something exciting to show you next week. I also worked on the remaining key backup endpoints, so for example deleting backups works as expected now. Thanks to everyone who supports me on Liberapay or Bitcoin!

This week we have been continuing work on the beta task list:

It's been a big week for Bruno:

Released 0.0.36 with end-to-end encryption enabled! 🎉
Most of this week was spent on performance improvements for IE11, where asm.js runs quite slow. Decryption is run in parallel on 4 workers in that browser, giving a massive speed-up and added responsiveness (the UI would freeze for 7 seconds when opening a room prior to this). There is still some polishing to do on sharing room keys, which I will get to next week, but all in all, it should work well. Next week I also want to get started on supporting key backup, so you can also read your encrypted history from before you logged in.

Check out the source code here.

We have released Element Android 1.0.6. Now we are working on sync mode for F-Droid version of the application (i.e. without FCM). We are also improving the experience with 1-1 calls.

Element v1.0.6 has been merged into SchildiChat.

Furthermore, following Schildi-specific fixes and improvements are included in the latest update:

To be clear, Element v1.0.6 has been upstreamed into SchildiChat, the projects have not merged.

This week, we released 1.0.10 which provides PIN protection and the return of the incoming native call screen. Then, we started to update room creation flows with new icons and behaviors for creation buttons and a new screen for room creation.

This isn't strictly a client, but it's in the clients section.

Getting stuff into the spec or even implemented in Elements is very slow, so while we wait for proper native sticker packs and pickers (i.e. not in an iframe/webview), I decided to make a better sticker picker widget: https://github.com/maunium/stickerpicker

The goal is to be as fast and simple as possible. The picker and sticker packs are just some static files that can be served anywhere (no compilation required). It doesn't require self-hosting anything except said static files, and it has been confirmed to work on all three Elements.

There's a Telegram import script that's used to reupload stickers to Matrix and generate the static sticker pack files that the picker widget uses. It's technically also possible to make the sticker pack files yourself, but there's no easy way to do that yet.

Due to the simplicity of the picker there's no authentication, which also means everyone sees the same sticker packs. One way to get around that limitation is to have a unique URL for each user. I'll probably write a bot to manage copies of the picker for multiple users in the future.

Since the initial announcement, my sticker picker has received some more features:

my sticker picker has dark theme support too now

Just bumped the Matrix Ruby SDK to version 2.1.2, fixing another bug with server discovery as well as the fact that state events haven't been provided for the application using the SDK. Oops.

There is also now a specific room for this crate: #matrix-appservice-rs:lieuwe.xyz, feel free to ask for support or tell if you've suggestions.

libQuotient 0.6.1 is out, with fixes for bugs found during the work on the next Quaternion release and also an optimisation in the way profiles of all the users are managed - noticeable when opening large rooms (like our lovely HQ). Quaternion 0.0.9.5 beta is coming real soon now (TM), with some big features being coded in and merged as I write this.

...and the release notes are here: https://github.com/quotient-im/libQuotient/releases/tag/0.6.1

I created mnotify which is a CLI based matrix client for automation tasks in shell scripts. Currently it supports login (via password), logout, sending messages, simple syncing, "get"ting the synapse admin api, creating a room, inviting users to a room, and joining a room.

https://publiclist.anchel.nl has been updated. The publiclist contains several public homeservers who can be used freely. Also listed some communities and roomdirectories which can be found at homeservers, last but not least public useable bridges can be found. The homeserver list contains now also uptime percentage and ip info. There is also a json that can be used by client builders.

And in completely unrelated news, I also just tagged version 1.0.0 of an invite bot for Matrix, which helps in doing bulk invites to communities and community-associated rooms.

A single bulk-invite (MXID or 3PID) to a main room will be propagated to invites into the community (if wanted), as well as invites to all rooms linked to the community, once the invited user joins the main room.

I did a talk called 'Matrix in 2020' with the Perth Linux user group, parts of the video are missing but the audio is solid

I think we did a good job summarising how far Matrix has come, we also preview the idea our new Matrix hosting company!