Don't forget that Matrix Live is also available in podcast form. Search for "Matrix Live" wherever you get your podcasts.

Gitter is joining the Matrix ecosystem!

It's true! Element has acquired Gitter from GitLab and will be implementing Gitter's current chat features in Matrix, before rebuilding Gitter as a Matrix client! Before all that however, the first step is to build a proper, modern bridge between the two networks, replacing the old one that's been around for years.

The full spectrum of news is:

And if you'd like to chat with your fellow Matrix and Gitter users, there's a bridged room already set up at #gitter:matrix.org!

Welcome to the community, Gitter! 🎉

In terms of Spec Core Team MSC focus for this week, after dropping off MSC2414 in the FCP bucket, we're heading back for another big swing at widgets. MSC2774 (widget ID URL parameter), MSC2765 (widget avatars) and MSC2790 (modal widgets) are the focus for this week 🙂 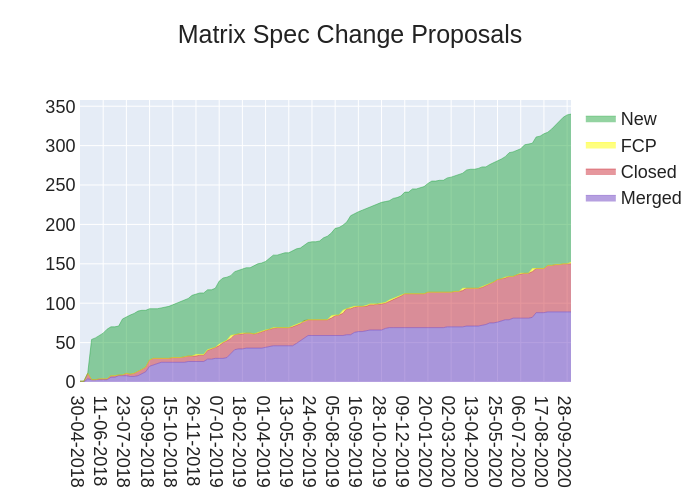 being totally shook up about the Gitter announcement for a good part of the week, I completed the work on MSC2312 (it's about Matrix URIs, ICYMI) and it hopefully won't be long before it becomes the actual standard to share Matrix coordinates in popular web browsers. Ok, who am I kidding - before Matrix clients get on with adoption.

This will allow people to post links to Matrix rooms/messages/users and when clicked will open right in your favourite Matrix client. Super convenient and great for adoption!

Dendrite is a next-generation homeserver written in Go. It is currently serving as the basis for peer-to-peer Matrix experiments

Build 38 of the iOS P2P Demo, as built using Element iOS and Dendrite, has been submitted to TestFlight and will hopefully be available for testers shortly (pending Apple approval)! It features lots of updates in the Dendrite backend which should hopefully make it more reliable.

If you have an iPhone or iPad and enjoy things that sometimes work, join the TestFlight here!

Aside from that we are working on moving background processes away from the main process, actually getting the event persister sharding onto matrix.org and trying to improve Synapse stability generally.

Dendrite is nearing beta! Today we will be cutting a candidate 0.1.0rc1 version after a week of hunting and fixing bugs. We are on track to release version 0.1.0 next week, at which point we will be inviting people to try installing and using Dendrite!

Recently, we updated some of our documentation and created a whole new set of easy first issues and medium to hard issues for contributors.

If contributing to Dendrite sounds like something you would be interested in, please take a look at these issues and join us in #dendrite-dev:matrix.org! There's also #dendrite:matrix.org for general Dendrite chat and updates and #dendrite-alerts:matrix.org for release notifications and important alerts.

This week in Matrix Construct supports aarch64 (ARMv8) architectures. The experience has been phenomenal, with performance exceeding all expectations. Last week I wrote about all new vector code inside Construct using SSE through AVX-512 hardware acceleration in servers; that same code is now accelerated by SVE (Scalable Vector Extensions) on ARM architectures when you compile with clang.

This result is important: ARM virtual machines are offered at a significantly lower price compared to x86 from the same vendor. The systems are cheaper, require less power, but generally perform worse. The trick is to optimize the software for the weaker hardware. The benefit allows, for example, Matrix server hosts running Construct to make th eir profit margin from the lower TCO, getting more out of every computing cycle.

Construct is available at https://github.com/matrix-construct/construct and don't forget to idle and idle #construct:zemos.net.

Element Web integration had been updated to 1.7.7 (1.7.8 available in branch testing)

I made a Signal bridge using signald.

Currently it supports bridging messages, reactions and signal read receipts. End-to-bridge encryption also exists (mautrix-python does all the work there). The bridge can be linked as a secondary device and possibly even registered as the main device, but I didn't actually test registering yet. Setup instructions are currently somewhat non-existent, but it's mostly the same as my other bridges plus signald as a separate daemon.

He then popped up again a few days later to say:

After the initial announcement earlier this week, I implemented a few of the missing features like media bridging, and even added setup instructions.

The speed at which Tulir writes bridges scares me sometimes.

mx-puppet-discord got updated to the newest discord.js version, meaning you have to update if you want to continue to operate it, due to discord having changed their gateway url!

mx-puppet-discord now also supports the intent stuff, so be sure to update by 7th oct

If you run mx-puppet-discord (like I do), make sure to update by October 7th or it will stop working!

Hey folks, I wanted to give another shoutout to say that we are still accepting PRs as part of hacktoberfest. Contributing 4 PRs will get you a T-Shirt (sadly not a Matrix one). Obviously, please ensure your PRs are meaningful (no copyright adjustments, typo fixes).

You can work on any issue, but we've highlighted some issues that would be perfect for newcomers over at https://github.com/matrix-org/matrix-appservice-bridge/issues?q=is%3Aopen+is%3Aissue+label%3Ahacktoberfest and https://github.com/matrix-org/matrix-appservice-slack/issues?q=is%3Aopen+is%3Aissue+label%3Ahacktoberfest

In the hope of expanding the number of people contributing to the matrix-appservice-slack repo I have spent a chunk of my morning improving the issue descriptions and labelling up issues. If you are interested in fixing a little annoyance with the slack bridge or just fancy writing some typescript see the good first issue label on the repo.

The matrix.org team are delighted to bring you the latest in Slack bridging technology. Do not let the

minor version bump fool you, this release is packed with the good stuff. The headline feature is that our phase 1 encryption feature has landed and is free for users to experiment with. Head over to the

docs to see how to set this up.

There have been other notable changes, such as:

(and many many bugfixes)

You can read the release information over at https://github.com/matrix-org/matrix-appservice-slack/releases

Looking forward to seeing all the new Hacktoberfest contributors! 🎃

SchildiChat's codebase has been updated to Element 1.0.8!

Furthermore, there have been a few design updates:

Aside from that we continue to improve on widget support for resizable widgets, modal widgets and generally making widgets better.

We are also continuing to work on instrumenting the app, improving mobile support for matrix.to and making jitsi calling more reliable.

Element Android: Version 1.0.8 is now available on the stores, it fixes issues with verification and PIN code among other issues (see https://github.com/vector-im/element-android/releases/tag/v1.0.8 for more details). Now we are working on improving performance when sending messages to rooms, and also improving global UX, especially of the home (rooms list). Search messages (in clear rooms for the moment) is coming soon, and it will be also possible to filter the room members list.

We will also spend some time on the new Android SDK, https://github.com/matrix-org/matrix-android-sdk2, which is for the moment a quick extract of what we have in Element Android. We have to take care of it as a real product now: document it properly, set up CI, export Javadoc, develop a sample app, etc.

Element for Nextcloud v0.6.11 has been released this week. The new version comes with various bug fixes, dependency upgrades, and an upgrade to Element Web v1.7.8. The version is also compatible with Nextcloud 20 which is being released soon.

Over the past couple of weeks, we've received PRs for all of the remaining federation endpoints, and all but one have already been merged!

Now that the end is in sight, we're turning our focus elsewhere. We're working on cleaning up and fixing a few bugs in our event signing code and soon will create tracking issues for filling out the Identity Service API.

All of these users are Telegram/Discord users that have been brought into Matrix over the last 30 days. This doesn't appear to be a temporary spike either: over the last 8 weeks t2bot.io has been hovering at 900-950 thousand monthly active users, up from 600-700 thousand. Record-setting traffic levels have also been achieved, with matrix.org being able to keep up for the first time in a long while.

I added zabbix-bot to my zabbix-matrix repo, which can get information about current problems from zabbix-server and send it to matrix user. https://github.com/progserega/matrix_zabbix

In our company we use it for get current situation and https://github.com/progserega/im_sender_service for sending events from zabbix.

I've found that having your systems reporting in a room while you chat around it can be really productive. Props to supporting yet another monitoring platform!

While 1-1 calls benefit from end-to-end encryption due to WebRTC, Jitsi group calls have always only benefitted from transport encryption.

A while ago Jitsi announced that they were adding E2EE to Jitsi. But did you know that it's using Matrix's Olm encryption under the hood? It's currently available as an experimental feature on https://meet.jit.si!

We also now have a room where the ping bots are only hosted on non-Synapse servers! See the scoreboard below.

XKCD made another strip about messaging systems and I’m outraged to see that Matrix has been left out of it.

Not to worry though, we've fixed it up! 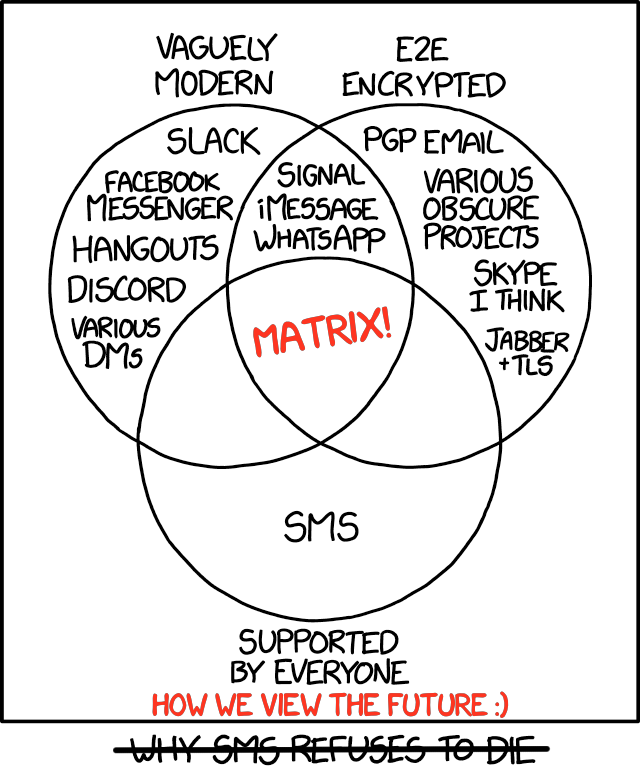 I hope you enjoyed this week and last's TWIM editions! Benpa will return next week for more of your regularly scheduled programming. Ciao!