Matrix in use at IETF and TeamSpeak

IETF is trialling Matrix as a replacement to Slack and a complement to XMPP: https://mailarchive.ietf.org/arch/msg/tools-discuss/cUd9P35cj-nGsaioZ9HmMLmf1G4/

looks like teamspeak is using Matrix (a Matrix endpoint was previously noticed at https://tschat-1.teamspeak.com/)

Here's your weekly spec update! The heart of Matrix is the specification - and this is modified by Matrix Spec Change (MSC) proposals. Learn more about how the process works at https://matrix.org/docs/spec/proposals

In terms of Spec Core Team MSC focus for this week, we're going to be keeping the same three MSCs as last week, as their review is still a work in progress. As a reminder, those are MSC2774 (widget URL template parameters), MSC2765 (widget avatars), and MSC2790 (modal widgets). 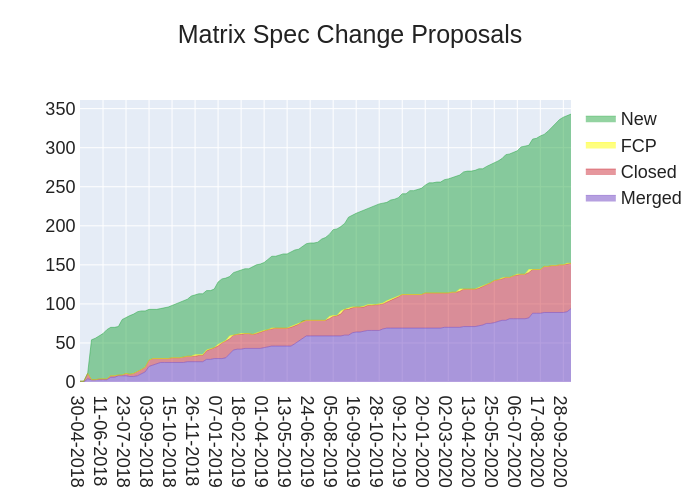 It aims to be an efficient, reliable and scalable alternative to Synapse.

We encourage early adopters to try it out starting with v0.1.0 in Monolith/Postgres mode.

Dendrite supports a large amount of the Matrix spec including:

federation of Matrix servers. At present, Dendrite has not been optimised for memory/CPU usage, nor does it fully support sharding, so there is still much scope to improve the already impressive resource usage whilst

I created an AUR package for dendrite. So it is easy to get it running on Arch Linux.

This week I worked on a new feature: the Admin Room. This is a room that is automatically created for the first user of a new homeserver. This room will be used to send warnings to server admins in the future and can be used to control Conduit (like querying information, running cleanup, banning servers, hiding public rooms or restarting Conduit). Power levels can be used to control who in the room has access to which commands. The admin room will work over federation, so it's easy to help someone fix his server.

This week we put out v1.21.0rc3, which fixes a duplicate messages bug. We expect the full release to go out early next week.

After a long and sometimes painful journey we plan to run sharded event persisters on matrix.org from Monday. All being well we will start running background processes on their own worker to free up the main process. These two projects combined should noticeably improve performance of matrix.org and any large scale deployments.

Aside from that we are continuing to work on room knocking as a feature and have been considering ways to reduce load attributable to state resolution.

We will also dust off the notifications project.

The native Gitter <-> Matrix bridge is underway and we're working on virtual users which is the first piece to making the bridge feel native. You can see what this will look like in this ominous and exciting tweet: https://twitter.com/gitchat/status/1314252991705292800

There is also a GitLab epic you can track which breaks down some of the tasks and holds more details of what we're thinking of for the bridge.

🌈 Once more into the Bifrost

Asgardians rejoice, for Bifrost development resumed this week! We've worked extremely hard this week to improve general gateway performance, edge case bugs and basically plowing on with the project. A 0.2.0 release will shortly be due with the new changes, and matrix.org is already running the latest and greatest. You can checkout the project over at https://github.com/matrix-org/matrix-bifrost

Former Fractal GSoC intern Alejandro Dominguez 😎️ got his Integrate matrix-sdk (I) merge request in “Ready for review” state. That’s a +3910/-5439, 38 commits diff‼️ poljar, who is the main contributor of matrix-rust-sdk, already had a look and provided some insights, but given 😱️ the sheer size of the changeset, the moar 👀️ we can get on it the better.

You can download Linux tarballs from the CI and run them on any system which has sqlite3 installed (which all distros may have). If you have libolm3 installed, you can also use e2ee. Oh and by the way. Its NOT electron or any html5 stuff! Its a native Linux app. We are working on packaging solutions like snap and Flatpak. 😊

I've started to make a Matrix client over the past few weeks, just as a hobby project for now, using Qt and a 'lil C++20! :D

There's not a whole lot to show right now - currently we've got password login, and a simple timeline that can show plain text or m.image thumbnails.

Source code's up at https://gitlab.com/CraftedCart/vtx 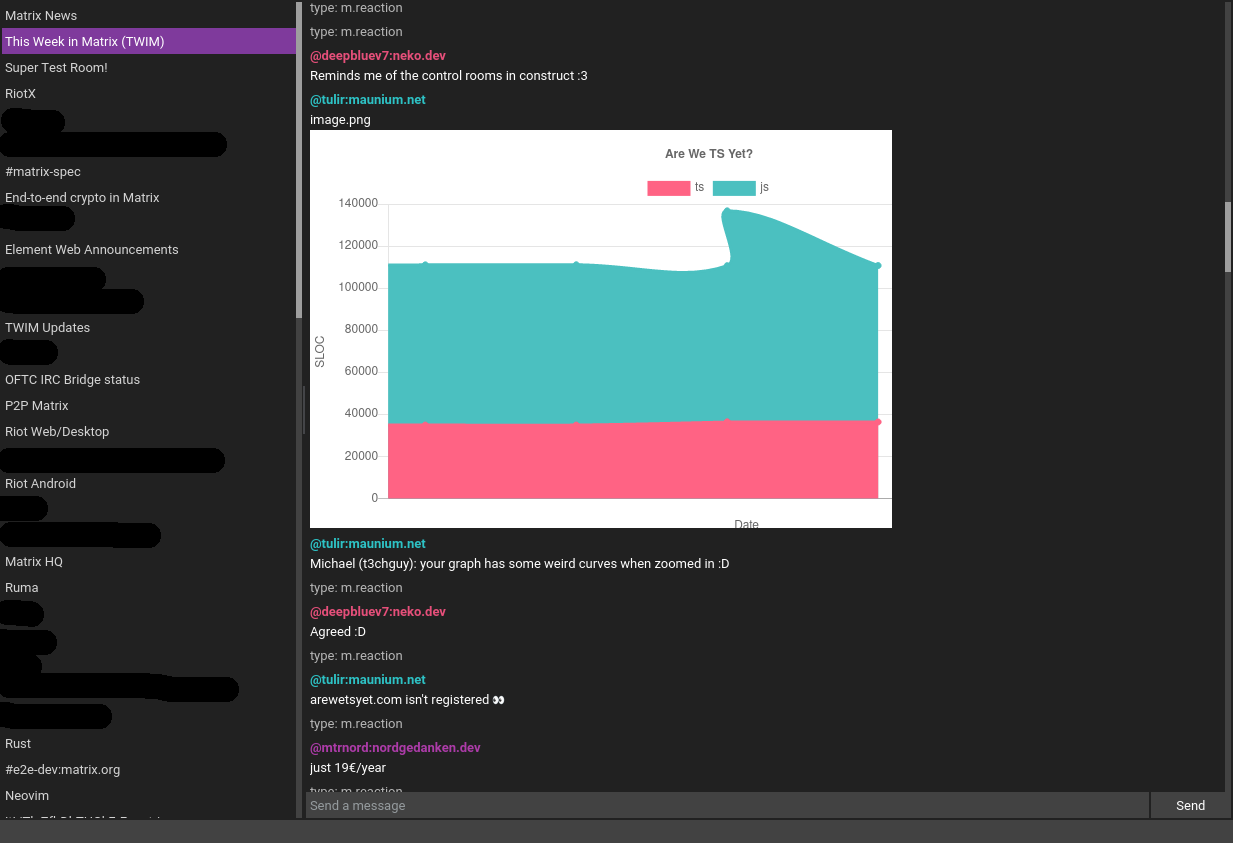 This week we finally cleaned up the remaining parts of Chethans GSoC work and merged it. This means Nheko now has partial support for cross-signing. You can either start the verification from another client or when viewing the profile of a user. There are a few things still missing though:

Other things that happened in the mean time or are work in progress:

So far Hacktoberfest seems to be going well with quite a few people trying to clean up some of the rougher edges in Nheko. If you are using Nheko and think some things could be better, why not try to fix it yourself? October is the perfect time for that!

Featurework of this cycle is also slowly nearing its end. Once cross-signing, voip and the new event store are stable, we plan to improve the UX a bit more as well as some other annoyances and maybe we can do a new release then! A nice and spooky Hacktober everyone!

This week we put out 1.7.9-rc.1 which is available at https://staging.element.io

Finally, the improved widget support is looking very exciting. Here is a design grab to give you an idea of what to expect. Note this is not a real Element screen shot, the base functionality is there, but the look and feel of the final version is subject to change.

Element Web is currently transitioning the codebase over to TypeScript - track our progress at http://arewetsyet.bit.ovh/

This week, Hydrogen gained better caching (and a little over-eager on Safari), room list filtering, a grid layout to show up to 6 rooms simultaneously (see screenshot) and work is well on its way for url-based navigation within the app. 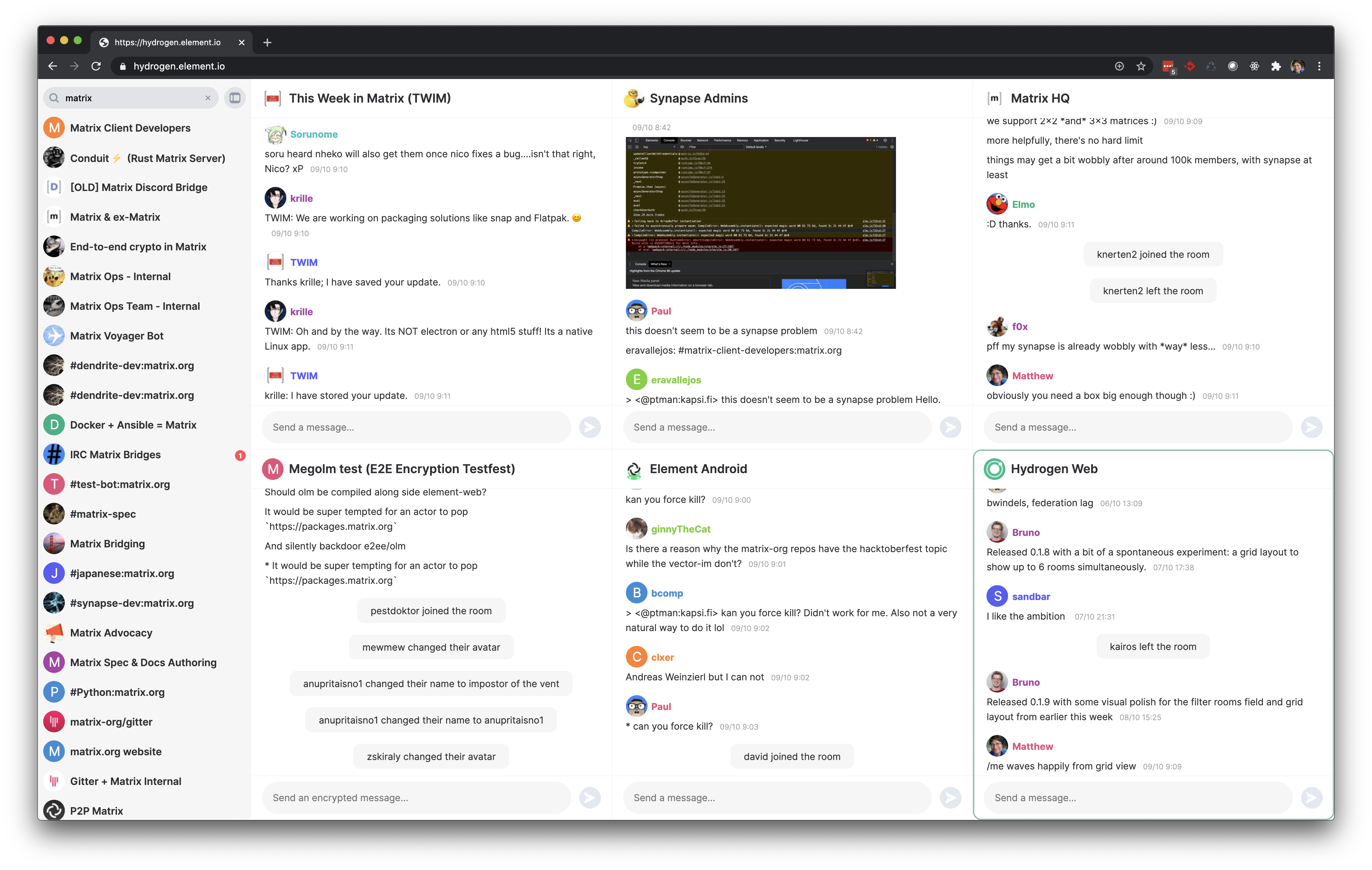 also adding the screenshot on iOS that I didn't get in last week, showing the full range of display formats supported 🙂 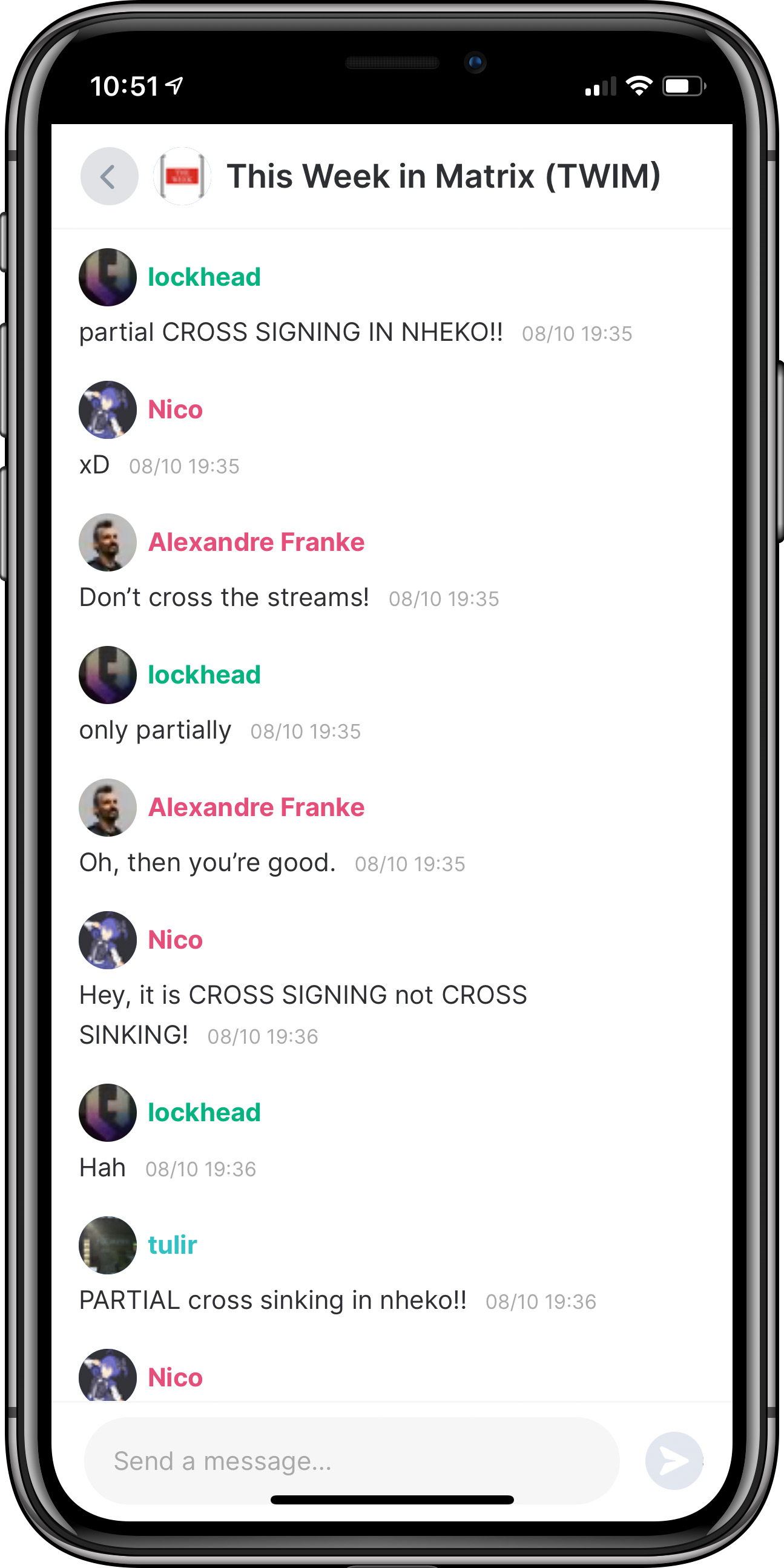 The app also received some visual polish, thanks to Nad, our designer.

We blocked the last week release (1.0.14) because of 2 issues: Unable to decrypt errors and timeline not updating when coming from a notification.

1.0.15 fixes those issues and more. The release should be available in TF soon. Hopefully, we will be able to publish it on the App Store on Monday

This week, I have improved the scoring rubric, so that the verdict given to you by the tester more accurately reflects the likelihood of connection establishment.

I have also added more hints on what the verdicts mean.

Finally, I have added workarounds to support Chromium browsers that decided to break their WebRTC API so that they could pedantically rename ip to address. In any case, it now seems to be on par with Firefox.

The VoIP tester is now roughly 'usable' but please note that IPv6 support is totally untested (I don't have IPv6) — it is also suspected that some browsers won't try IPv6 anyway.

There are also some more features on the wish list, such as screenshot safety and extra help when things go wrong.

Versions 3.2.0 and 3.2.1 of libolm have been released. 3.2.0 supports fallback keys (MSC2732) in the C library and the JavaScript binding, and includes several JavaScript/TypeScript fixes and improvements. 3.2.1 was just a fix to the TypeScript definition file.

This week, q-b implemented moderation policy events, bringing us to full compatibility with r0.6.1 of the client-server API. iinuwa added the only endpoint we were missing from the appservice API. Additionally, I improved Ruma's JSON canonicalization, making it both simpler and more efficient.

Due to two issues regarding future-compatibility, we're still a while away from our next set of releases, but we're working on it!

js introduced it with:

ObjMatrix (GitHub) is a new Matrix client library written in modern Objective-C for ObjFW. Because it uses ObjFW, it is not limited to Apple platforms, and instead is extremely portable and should run on basically everything.

Since ObjFW also works on platforms that are usually hard to support or port software to (e.g. MorphOS), this will hopefully also bring clients for these less mainstream operating systems. I'm especially hopeful about MorphOS here, since ObjFW already runs quite well there (parts of it are included with the OS even!), and hardware on which MorphOS runs on is usually not powerful enough to run Element Web. And eventually, I will want to have a Matrix client on my Amiga, too 😉 (which this should enable).

This currently does not have a decicated Matrix room yet, so all discussions about it currently happen in #objfw:nil.im. So please feel free to join there and follow along development. And contributions are of course very welcome!

the famedly.matrix ansible collection has seen a release v0.2.0. Highlights since the last TWIM mention:

We’ve put together a write up on how to deploy a Noteworthy Hub (transparent TLS proxy) in order to make it easy to run a federation capable matrix home server behind a firewall or NAT: https://noteworthy.tech/hub

Thanks anoa for TCB* the last two weeks! Was fun to be the one to read TWIM for myself. :D