In which I chat with Kitsune about the work done to get a Matrix URI schema agreed, and the state of the work.

See also, Open Tech Will Save Us #7 took place this week! Go watch.

As a crude measure of growth, Matthew commented about #twim:matrix.org:

That is something to love. Come join us in the room to share your news and see what's new from others.

In recent weeks the XR Finland community has been moving over from Wire to our own Matrix homeserver for encrypted secure chat. This was something that had been planned for a while but kicked off in recent weeks due to Wire suffering from serious encryption key delivery issues, causing messages for many to be unreadable in large groups. Currently we've migrated almost 300 rebels with more to come. Feedback has mostly been very positive, people generally like the Element clients 🤩 One of the interesting changes has been a huge uptick in the amount of discussion, which can be taken as a good sign. The plan is to next start bridging to some of the international XR chapters, for example those on Mattermost, Telegram and Slack. And maybe get them over to Matrix too eventually ;)

To aid in community management, we've started creating a bot called Bubo. Right now it mostly helps with maintaining rooms and allowing mass invites, but more features to help the community cooperate are coming. We were planning to utilize (actual) communities so it has some functionality for those, but decided then to wait for the communities rewrite. It doesn't yet have any releases, will update in coming weeks as features are added and releases made.

wants to clarify that XR is a decentralized movement and this does not mean other chapters will adapt Matrix - but we can hope and for sure here in Finland we'll be spreading the good experiences to other chapters ;)

We're working on a new platform for the specification docs, aimed initially at improving navigation and general usability.

The initial demo site is at https://adoring-einstein-5ea514.netlify.app/spec/ and the main tracking bug is at https://github.com/matrix-org/matrix-doc/issues/2822 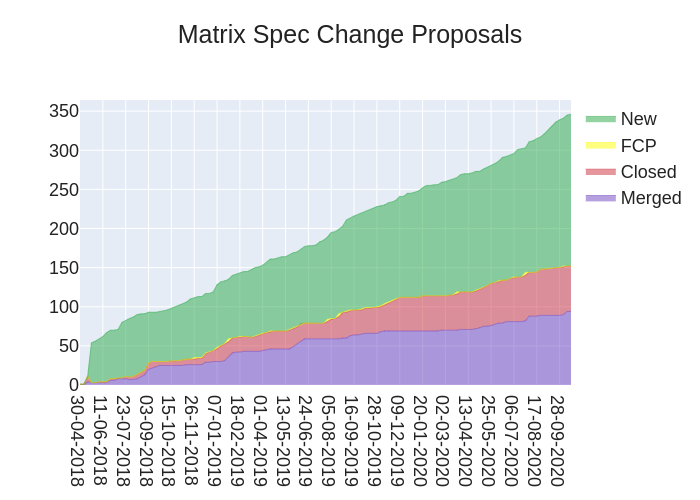 We released our first beta last week and we've been busy taking feedback from the community and fixing problems as they have been reported to us. We will be cutting a v0.2.0 release candidate later today, which contains a significant number of important fixes and performance improvements.

We didn't publish a full changelog last week due to the beta announcement, therefore the following list includes changes from the last two weeks:

Spec compliance has improved a little:

Good grief that's a big update! For a video discussion of the status and future of Dendrite, check out Open Tech Will Save Us #7.

Stonking week for Synapse as we landed sharded event persisters and deployed to matrix.org. This is the last significant component other than the main process to go through the sharding process and a major hurdle in horizontal scalability of Synapse.

Initial results look good with event persistence apdex improving, however we think there are still some significant performance improvements available through configuration and will continue to experiment.

We also moved off background processes from the main process. This is significant because it means that while the main process is not shardable it really doesn’t do anything anymore other than orchestration.

Again the initial impact looks very promising and we will continue to tune. Having moved the background processes away it also makes profiling the main process that much easier.

Aside from all of that we continue to progress room knocking put out a 1.21.2 - a bug fix release though please please ensure you are running at least Synapse >= 1.21.0 since 1.21.0 contains a XSS security fix.

Next week we will carrying on tuning matrix.org and start to look at improving state resolution performance.

Just pushed the updated image tags and chart version for my K8s-optimized Synapse image for version 1.21.0, as well as a chart update for element-web 1.7.9

And to expand on my previous update, got Synapse 1.21.2 up on the chart and K8s-optimized image.

Element Web integration had been updated to 1.7.8 (1.7.9 available in branch testing)

Small bit of news I wanted to talk about from Bridge Island. My implementation for MSC2409 has been merged which means appservices / bridges can now listen in for incoming presence, typing and read receipt events! This means that the Slack bridge can now reliably send your typing status to Slack, and Bifrost can reliably bridge your everything to XMPP. The MSC is still in flux and could change, but for now this could really improve the native feeling of bridges :)

(Oh and I should mention anyone using matrix-appservice-bridge v2.2.0+ can use this behaviour for free)

Hot on his heels, Tulir announced:

I've been adding support for the MSCs Half-Shot implemented in Synapse to my bridges:

Both of these will also be implemented in mautrix-go/whatsapp soon.

Now I just need Half-Shot to make synapse send to-device events to appservices, after which bridges won't need any hacky /syncing at all.

We are currently preparing the release of the version 1.0.9 of Element Android, which contain searching messages in clear rooms and a lots of other improvements and new features.

The SDK 1.0.9 will also be released, with an updated readme, and a brand new sample app, written by Ganfra. It will help developers to start using the new SDK and can be found here: https://github.com/matrix-org/matrix-android-sdk2-sample. This sample app is able to let the user connects to an existing account on any homeserver with password login, display the room list, display a room timeline and send message to a room. a brand new sample app

YES! This is the best documentation

I published the first preview of my Sailfish client called Konheko. While you can run Android applications on Sailfish, they usually are a subpar experience, since they really don't fit the platforms design and style and also usually don't properly send notifications.

So about a year ago I started working on a Matrix client for SailfishOS, but I never really made much progress. Well, last weekend I did, and so it can now send plain text messages as well as various forms of media messages, I made a basic application icon and I've been using it this week already (for unencrypted rooms).

It is still missing a lot of features, but if you want you can install it from OpenRepos. Sources are available here. Just be aware, that it currently stores all messages in RAM, so every restart will take forever to load your rooms and it may run out of RAM at some point. Storing messages in some database will come at some point. Also, a lot of menus may lead nowhere, since those are just placeholders for me atm. 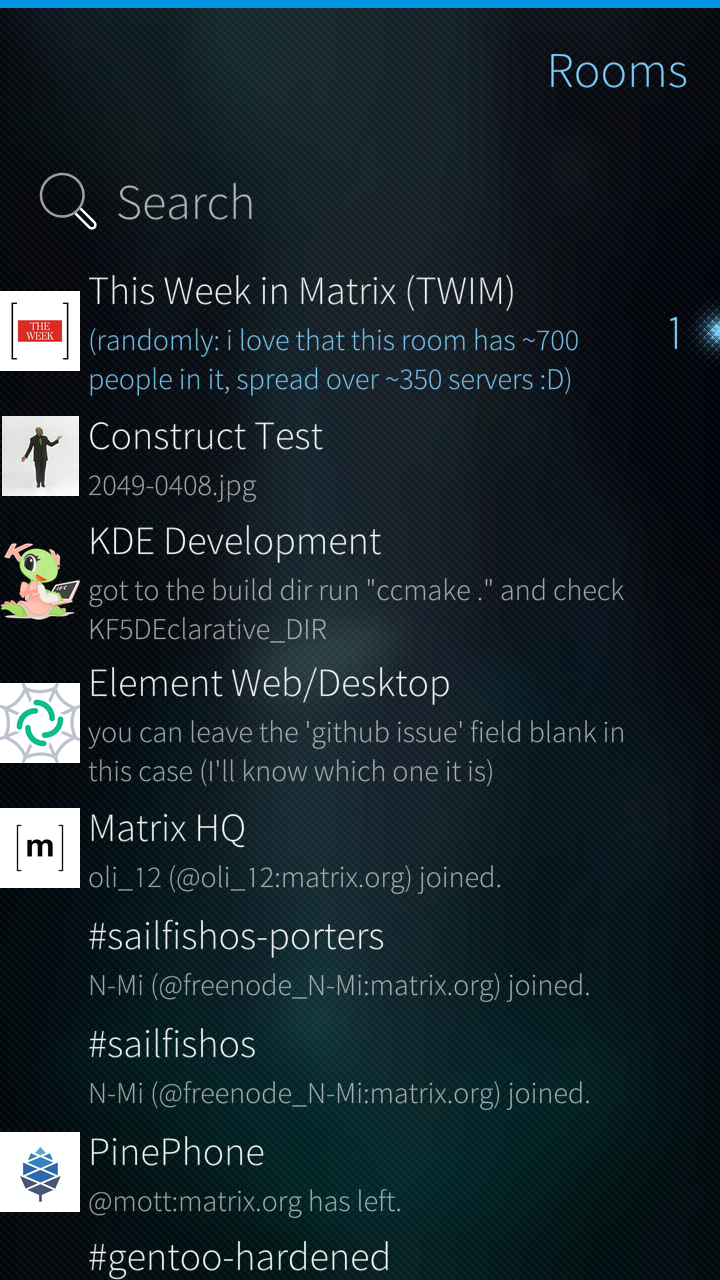 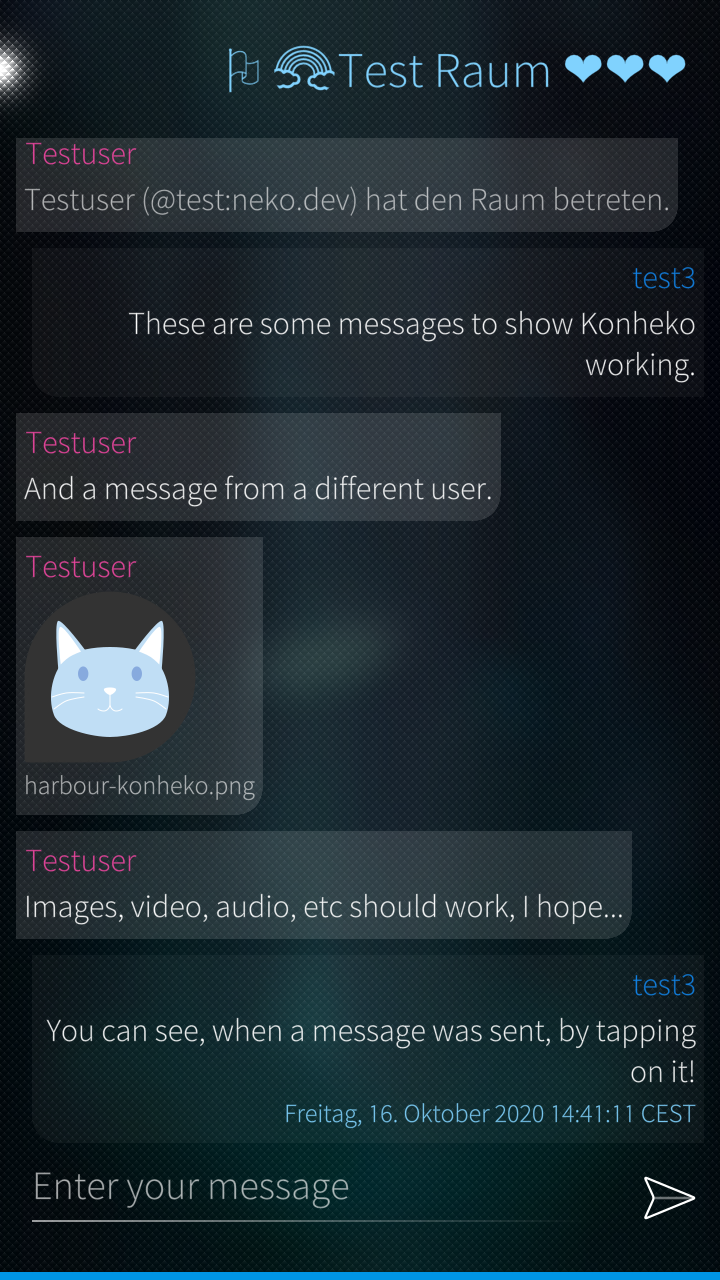 Recently, I tweaked Element-web to feature a few changes similar to SchildiChat for Android.

For now, it's probably best seen rather as a proof-of-concept than a finished product, as there are still some layout bugs, and no settings available for the added features (I know some people prefer separate lists for direct and group chats). I consider it usable though.

I don't know how much I will work on this in the future, but I figured it might be interesting to share either way. Maybe even someone with more web-development skills than me might want to help improving it :)

For further discussion, I have created #schildichat-web:matrix.org .

The current version of SchildiChat-Desktop is available for Desktop here, and I host the web variant here. If you want to build it yourself, check out this repo. 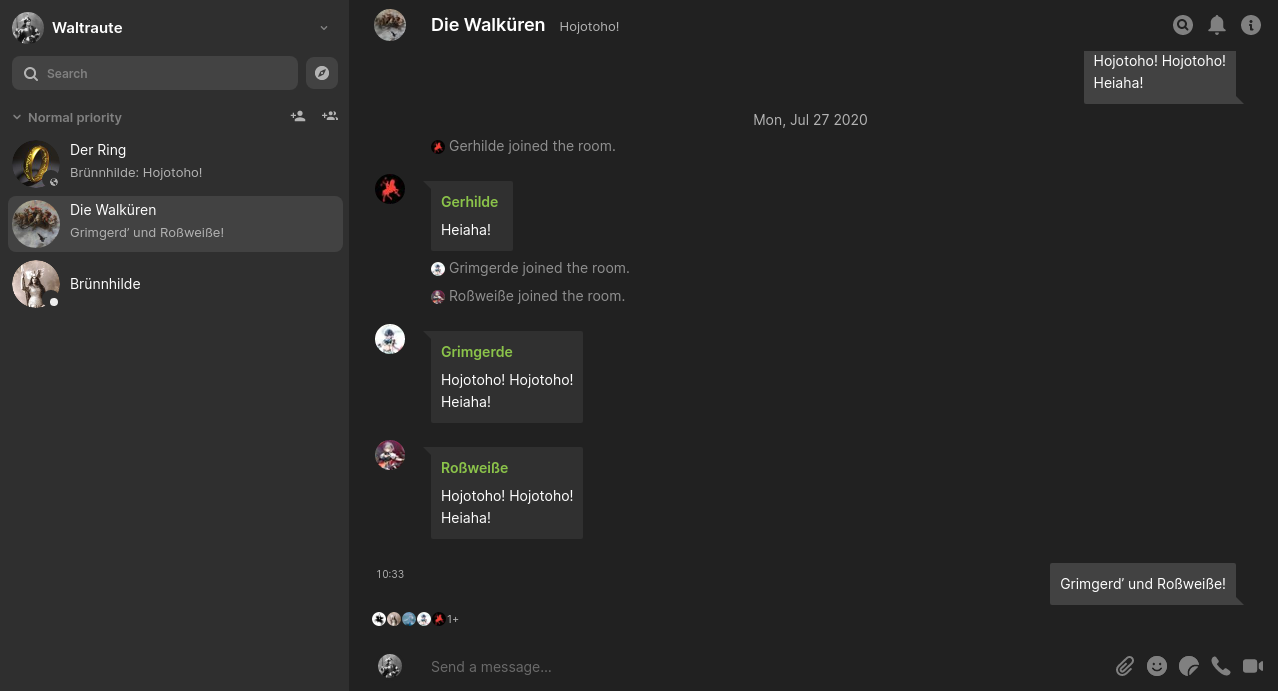 Element 1.7.9 has landed, highlights include

Aside from that has been pushing on with the widgets project. A picture says a thousand words, so here you go. 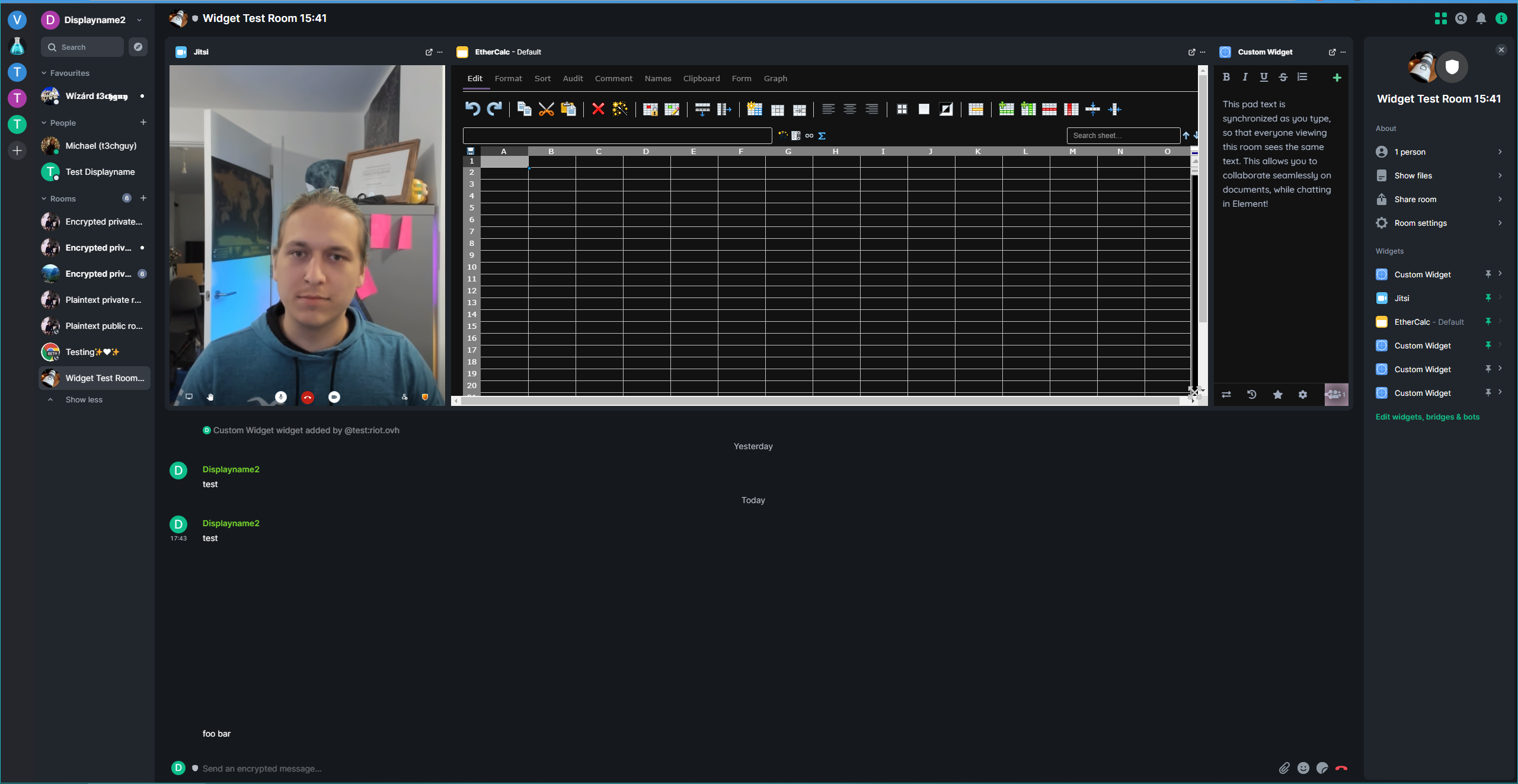 As you can see T3chguy was really pleased to have me interrupt him to take this picture. Expect the new design to merge next week.

Finally we will most likely ship a new release next week to fix some Jitsi bugs.

I wrote a Wake-on-LAN bot to wake up hosts by sending a matrix message. It is configurable with multiple hosts and has a list of users per host who are allowed to wake it up. It's using the matrix-rust-sdk, source is available over at https://git.jcg.re/jcgruenhage/matrix-wol, and if anyone has questions, feel free to join #matrix-wol:jcg.re.

When I asked what this is used for:

I have stuff on my workstation that I need access to most of the time, but keeping it running uses too much power (but I did it anyway so far), this is so that I can suspend it when I leave but can still power it on when I need something from there on the got

Talking about Bridges and Bots in Matrix (German)

I was invited to the German Podcast MacMittwoch (no, it's not only about Macs) to talk about Bridges and Bots in Matrix. It was a very interesting and funny round.

Here is the recording:

This is a script I've created for use with MSC2545. It allows easy uploading of emoji packs to Matrix rooms. Feel free to check it out on Gitea, or join the project room #matrix-emoji-upload:blob.cat if you have any questions/comments/issues.

Exciting! Yet the saga that followed only adds to the excitement!

Could it be that only matrix.org as HS currently is supported?

I'm getting Matrix credentials are not valid! and I see the request to matrix.org on a traffic capture.

the original PR mentions mantrixorg indeed: https://github.com/n8n-io/n8n/pull/1024 .. sounds like PR time for someone :)

oh nice it got merged already

For those not following on github, n8n released a new version including the fix for homeserver

Oleg, who brings us back to the start said: