Hello everyone, normally anoa would be doing this update but today you get me (TravisR) instead. Luckily anoa has left me a script to run, so here's hoping I haven't completely messed up this week's update 😅

In terms of Spec Core Team MSC focus for this week, we're still focusing on the same MSCs from previous weeks to get widgets over the line. This includes MSC2774 to have widgets aware of their widget ID, MSC2765 so widgets can be pretty in clients like Element, and MSC2790 to support a form of user input with widgets.

Normally there would be a graph here of our MSC progress, however my machine refuses to accept that line graphs are a real thing today. As a replacement, here's a snowfall accumulation graph for Banff as reported by Environment Canada.

I made a simple room alias proxy: https://mau.dev/tulir/mauliasproxy. It can be used to create room aliases on custom domains without having to host an actual Matrix homeserver there. The proxy basically just responds to federation room alias queries using data from another homeserver (that data is fetched with the C-S API).

A new release candidate appears! Synapse 1.22.0rc1 was published yesterday and includes support for running background tasks in separate worker processes, as well as fixes to sharded event persisters which were first introduced in 1.21.0.

These changes significantly improved our client join Apdex score for matrix.org by making join performance both faster and less variable.

Lastly, the default room version is now version 6, per MSC2788.

In the coming weeks we'll focusing on improving Synapse's resilience in smaller to medium-sized deployments, primarily through improvements to state resolution. Stay tuned!

Today's update comes courtesy of Dan Callahan (@callahad:matrix.org), who joined Element on Monday as an engineering manager supporting the Synapse team. Dan previously worked in Developer Relations at Mozilla, and he's excited to help Matrix realize its ambitious vision for private, secure, and standards-based communication for all.

This week we released v0.2.0 on Tuesday, a reasonably big update containing various improvements over the initial beta release, and then followed it up with a bug-fix v0.2.1 release on Thursday.

Thanks to everyone who has been running Dendrite and reporting their findings, and also to contributors who have been submitting pull requests!

Timo stepped in to tell us:

This was another productive week:

Cool, we run Synapse on Pi0, Pi2 and Pi4 -- works reasonably well on each of them, i'm excited to try Dendrite

Synapse running on a Pi zero..?

The initial iteration of virtualUsers is in shape to merge(check out the flair 🔥) and will probably deploy in a release next week. We've split the rest of the virtualUser work into follow-up issues we can iterate on. We're working on adding room ban and spam detection support for virtualUsers to stop any bad actors. Then want to start on the actual Application Service bridge (Gitter <-> Matrix).

If you're curious about more of the details, you can track the greater GitLab epic.

I couldn't really wait to talk about before we actually hit 0.2.0 so here is a sneak peek at what's happening. We've spent a ton of time working on ironing out the bugs and making the bridge more XMPP complaint. The major headlines are:

You can read about (and run!) the latest release over at https://github.com/matrix-org/matrix-bifrost/releases/tag/0.2.0-rc1.

Incidentally, if you've not yet, then try joining some rooms such as #twim#[email protected] from XMPP and see it live!

Hydrogen gained a settings panel this week with a better session backup UX and your end-to-end device information, which should make the manual verification easier. Messages with multiple lines are also rendered as such now, which makes a big difference in usability. The app also works offline again after session backup broke that. Apart from that, several smaller fixes also landed.

Also, image decryption is well on it's way with a prototype working. 🎉

The massive MR to switch to matrix-rust-sdk is still being reviewed and help is still welcome. We have been working on other stuff as well. Actually, since our last news piece for the release of 4.4, quite a lot happened (around 60 commits) that we haven’t reported here yet:

And that’s not all! Good progress has been made towards rendering formatted_body. Hopefully that should be merged soon. 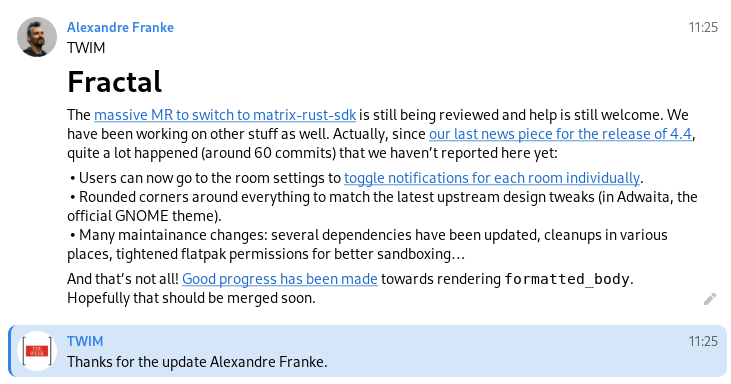 We released Element 1.7.10 on Tuesday with some high priority fixes:

Quite soon after that on Wednesday, Element Web 1.7.11-rc.1 made it's way to staging:

Fluffychat 0.20.0 is out! It should be available in fdroid, google play and on iOS soon!

perfect for university start. Finally I can write the thesis in the University matrix ;P

Element Android v1.0.9 is now available on the PlayStore. For the next release (1.0.10), we will optimize the performance (again!). We already have made some progress when sending a message to a room. We are now working on the crypto module and also we will probably upgrade the Realm database library, which seems more stable now. Besides that, we are still implementing the remaining features with the objective of getting a good feature parity with the other Element Matrix clients.

This week, we have been working to upgrade libs and tools to be compatible with Xcode 12.

We are making good progress to revive a kind of background sync so that a message appears quicker in the timeline when you tap on its notification. Authentication for widgets is still in progress.

Finally, some controversial change, which is currently in master but may be reverted at some point: Nheko now automatically forwards keys to verified devices, when they request the keys, without prompting you. While that can be toggled off in the settings, it currently defaults to on. This weakens backward secrecy of e2ee a bit, but it makes it possible to recover from e2ee issues much more easily. Currently I'd argue, that it is an acceptable tradeoff. It is very hard to verify room membership of users at any point in time but the current one and room membership is not verified end to end in any way, so you need to trust the server to provide you with the correct memberlist or you just send keys to verified users. While Nheko still sends keys to all members of a room, when creating the session, it only forwards your own keys to trusted users without prompting you. Currently I think this is an acceptable tradeoff, as opening a popup with "user x wants to have session y shared in room z" is unlikely to be understood by anyone properly either. I'd be glad to hear your opinions though!

That's it for this week, but next week will be interesting too. Lorendb has been hacking on profile support, allowing you to run multiple login sessions of Nheko in separate windows and some other UI features.

API. We are working on smoothing out some rough edges in the ruma-federation-api crate, like a few that @Timo addressed this past week, so it will be a little while

before it's completely finished.

the last Matrix API we have to complete.

Quotient 0.6.2 has been released, with a couple of minor bugfixes. This release is used as a foundation of Quaternion 0.0.9.5 beta that's also getting out today - with support of (proper Matrix subset of) HTML, rich text user links (like pills, only lighter), initial Markdown support (if you build with fresh enough Qt), reactions (thanks to Karel Kosek @krkk), navigation to earlier events (thanks to Roland Pallai @rpallai) and quite a few other improvements. To make this release Quaternion had to gain its own basic HTML parser and Matrix-to-Qt-to-Matrix converter, which is likely to end up being a separate micro-library, in the hope that it will be useful for other Matrix projects building on Qt (even non-Quotient ones). A separate call to translators - quite a few strings got updated, so please head to Quaternion project at Lokalise and push the numbers at least to 80%!

If you are visiting the OSS EU next week - come to the Matrix talk. 😉

In august I held an introduction to and demo of matrix talk during a conference hosted by my local makerspace.

This week the talk was uploaded! (Norwegian) https://www.youtube.com/watch?v=s9Xd0Wg_XqA

Jose Franco gave a great talk at AstriCon Plan (9) on building Omnichannel contact centers with Matrix, Asterisk, Kamailio and friends. You can see the video at https://youtu.be/7S6GZz8f91o?t=18558 and the talk details at https://astricon2020.sched.com/event/e0GA/blending-open-source-rtc-tools-to-build-an-omnichannel-contact-center