This marks the start of Season 6 of Matrix Live (S06E01), a decision M+A apparently made on the fly just now. Incrementing a mostly-arbitrary counter... Imagine wielding that kind of raw power!

The IETF have been continuing to experiment with new chat systems, and #xmpp_bridgingmeta_jabber.ietf.org:matrix.org exists as a three-way bridge to discuss the initiative spanning Matrix, XMPP & Zulip. Really fun to see open chat converging like this :)

Fresh off the arXiv presses comes our

“Analysis of the Matrix Event Graph Replicated Data Type” preprint! This time, it is a deep dive into the data structure properties of the event graph:

What type of consistency guarantees does it provide, how many of the other homeservers you share a room with can be faulty or malicious without violating those guarantees (short answer: all of them!),

and how is it possible that a frayed-out event graph ever laces back to just a few current events, while there is a probability larger than zero for growth to arbitrarily high limits?

To shed light on those questions, we had a great cooperation between my Decentralized Systems and Network Services Research Group and Prof. Dr. Norbert Henze from the Institute of Stochastics.

While we are still in search of the right venue for peer-reviewed publication, we went for a preprint this time to share our results with the scientific and the Matrix community in a timely manner. In this figure, k is the number of participating servers, U_n is the current width of the event graph.

In terms of Spec Core Team MSC focus for this week, MSC2744 has entered FCP. As such we're switching it out for MSC2844, which aims to define a global versioning system for all spec documents. Note that MSC2844 does not currently have FCP proposed. Its purpose for being in the focus this time around is for asking the team whether ideas proposed are plausible.

We've also started making use of a Github board to track the state of an MSC through the currently somewhat ambiguous process of putting up an MSC that is ready for review to starting FCP. You can find the board here: SCT Backlog.

Some explanation of the columns:

These definitions are all flexible as we continue to see what works for the limited resources we have available for review.

Do not be alarmed if a particular MSC is not on this board, we're placing things on here as deemed necessary, and more will certainly be added in time. 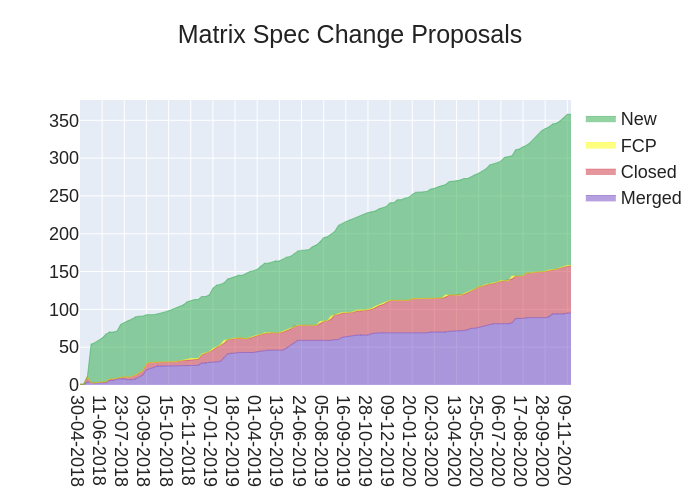 Working on the new spec platform: this week we've been simplifying the toolchain that builds and renders the spec, to make spec authoring easier and faster.

Note: We are aware of a trivially exploitable denial of service vulnerability in versions of Synapse prior to 1.20.0. Complete details will be disclosed on Monday, November 23rd. If you have not upgraded recently, please do so.

Happy RC day! The first release candidate of Synapse 1.23 is now available. For Synapse admins, we've added numerous new APIs thanks to contributions by @dklimpel, and we now support generating structured logs in a standard manner. The structured and drains logging options are now deprecated in Synapse's configuration.

Synapse 1.23.0rc1 also includes several significant bugfixes, especially around regressions in the SQLite-to-PostgreSQL database porting script, as well a fix to an issue that would prevent Synapse from recovering after losing its connection to the database. Synapse will also now reject modifications to access control lists which would otherwise result in a server blocking itself from a room. This is a particularly interesting case of unintended consequences in protocol design, and we hope to write more about it soon.

Next week should see the full release of 1.23, followed by a first implementation of MSC2403: Add "knock" feature landing in the development branch for 1.24. Look for more information in next week's edition of TWiM!

Spec compliance has improved as a result:

Element Web integration had been updated to 1.7.12 (1.7.13 available in branch testing)

Hello all. Hydrogen gained emotes (/me) this week, together with file uploads and downloads! Also, encryption keys are setup while typing instead of after sending, so you should see less momentary "the sender hasn't sent the keys yet". Also a good number of bugs were solved. Next up: image uploads!

As expected, /me commands brought a chorus of:

now that you support commands, you must add the single most important command in any decent Matrix client

Bruno got the idea pretty quickly:

Hello TWIM! From this week on we're changing how we're reporting updates on the Element clients. Each week, we'll include a section for cross-platform feature work the Element team is working on, and some sections for platform specific work too.

Communities are back! They've been renamed to Spaces, and on the Element team we've been busy exploring user experience and critical thinking for MSC1772, to allow users to organise rooms into useful groups.

In an effort to reduce friction in authentication, we've been R&Ding how to allow homeservers & Matrix clients to support multiple SSO providers.. Most of the work so far is captured in MSC2858 and we're starting initial implementations in Element web next week.

We've started foundational research, design and engineering to improve both the usability and stability of native matrix VoIP in Element. We've also started to look at how we can improve the continuity of the user experience between native Matrix calls and our current implementation of Jitsi.

We've been focusing on improving post-registration actions all round to make Element provide better prompts for first actions, and empty states for views on all platforms, with a multitude of fixes having landed on Element Web, iOS & Android in the last week. We've also started paid user testing to better understand specific pain points in the first time user experience, which we're looking to improve significantly in the coming weeks.

v1.7.13 is now live! Which includes a bunch of fixes & improvements on VoIP.

v1.0.10 is now available on the Play Store. We're also doing ongoing work to catch up with feature parity to Element Web, and Dominaezzz is migrating SDK APIs to suspend functions: no more MatrixCallback!

v1.1.0 is soon to be live on TestFlight for beta testers, and we'll soon be turning our attention to fixing end-to-end encryption regressions.

That's all, thank you trilene and MayeulC for the contributions!

that's cool. Do you have any projects that are using it?

I don't want to "sell" it before there's some kind of poc, but with a few friends we're trying to build a bridge for ActivityPub. we're using the library of the same name by the people behind CommonsPub, of which a lot of code comes from Pleroma, so the application service appears as an ActivityPub server. it's still the beginning, and I'm just starting to think about which information a bridge needs to keep (I guess sometime I'll ask Half-Shot a big list of questions 😁)

A new release integrates an embedded h2 database into matrix-spring-boot-bot, which makes it a lot easier to write bots with persistency. You only need a few lines of code to write simple bots (e. g. a ping bot). I also changed a lot under the hood (e. g. using type-safe Matrix-Id-classes instead of Strings).

The matrix-sms-bridge now uses the h2 database from matrix-spring-boot-bot instead of neo4j, which makes it a lot more stable and fixes some bugs. We are using it in production with hundreds of target telephone numbers without problems. I also added an optional feature to use room aliases (e. g. #sms_4901234567:homeserver) to prevent multiple rooms with one target telephone number (which is still possible).

In a few weeks you can use this bridge with an old Android-Smartphone, which acts as an sms gateway with rest api.

I've written a small blog post about a Matrix chat bot I've developed with matrix-js-bot-sdk, it was started to address Mozilla specific features first, but then I've added a few other generally useful features too! Hope you'll like it and find it useful!

#botzilla:delire.party is the room for discussion (thanks Davo)

Hello Matrix friends. I've been asked to share this here. I'm currently building a platform for building communities. I'm focused on deeper matrix integration with communities, private messaging built on top of matrix, and custom domain support. Feel free to check out https://gurlic.com. The matrix community is at https://gurlic.com/matrix, but I haven't had the time to post much.

I pretty much want all resources to have custom domain support, and matrix rooms for all communities, and nested communities. In the near future, I hope to have matrix servers for custom domains too. And of course, the source will also be open if folks want to host.

Right now, users on gurlic get a matrix account, and communities/galleries/publications get a room too, but i'm hoping to take some time to look at much deeper integration. Dendrite and hydrogen are great to build on top off...