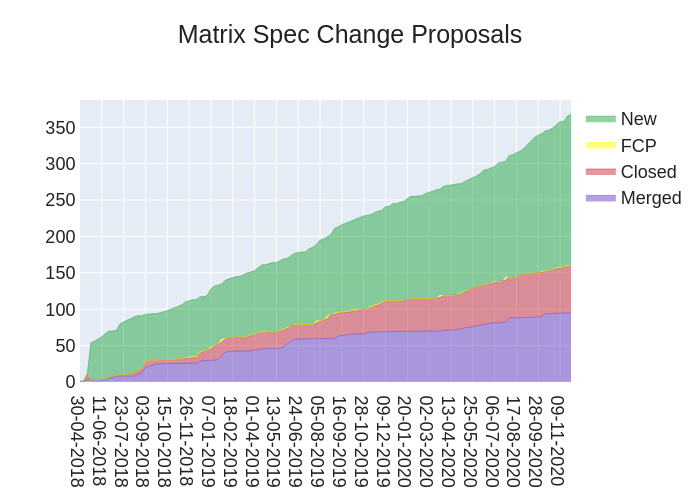 On behalf of the Americans on the Synapse team: Happy Thanksgiving! This past week saw us land some improvements to the OpenID Connect SSO provider, bringing it closer to parity with the SAML provider. In particular, #8801 made it possible to gracefully handle username collisions when creating a new account over SSO.

We've also merged a pull request (#8785) from @dklimpel which removes deprecated paths for the Synapse Admin APIs. As of the next Synapse release, all Admin APIs will be accessibly only under the /_synapse/admin/v1 path prefix.

Otherwise, much of our time has been spent on getting pull requests like #6739, implementing MSC2403: Add "knock" feature, ready to merge. It's coming to a Synapse release soon!

Speaking of releases, we're looking forward to cutting a first release candidate of 1.24.0 early next week; keep your eyes peeled for that!

I'd be remiss in not mentioning that we started the week by disclosing CVE-2020-26890, which is a denial of service affecting Synapse versions prior to 1.20.0. If you've not upgraded, please do.

Not everything is available on production yet but you can try out the bridge for yourself at https://gitter.im/gitter/testing-matrix-bridge: #5faa0809d73408ce4ff3ad8e:gitter.im

We'll be working through some of the bridge oddities and hoping to open up the bridge to all public rooms on Gitter soon. You can track our full progress from the GitLab epic for the native Gitter-Matrix bridge.

The MX-Puppet-VK bridge for VK (Vkontakte) social network via this commit have added initial support for User tokens. This means that we now can use it for puppeting the real user account, to automatically bridge all "VK Messenger" private dialogs and groups into Matrix. Previously bridge worked only with VK community tokens as bot, to bridge only conversation with specific communities.

To get the VK User token without registering new app (and waiting approve from admins), users can reuse the "Kate Mobile" app token (or other app, that have access to Messages API) and receive it via https://vkhost.github.io/ service.

The matrix-sms-bridge can finally be used with an Android smartphone as SMS-Gateway instead of gammu and a modem. @rebekka:imbitbu.de developed the app android-sms-gateway-server, that the bridge uses to send and receive sms messages. The new bridge version is used in combination with the app in production (medical care centre) for a week now. We have a throughput of 50-100 SMS message a day. The update is also integrated in matrix-docker-ansible-deploy.

The new completer is now on master. Please try it out and report any issues you may find. It now actually inserts a user link, keeps a per room message history and should look quite a bit nicer and be faster, when completing emojis or user names.

There were also quite a few cleanups, most of them done by Kirillpt! Some spacing here and there, saturation changes, the login page should now be less confusing, when you don't enter a valid mxid and toggles should now not get stuck in confusing intermediate states. There is also a russian translation now and some VOIP fixes. Pretty busy week, but I like it! 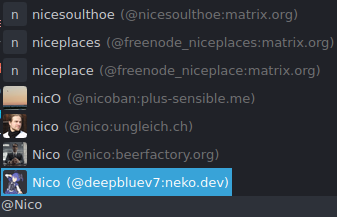 FluffyChat 0.23.0 is out now with password recovery options and a lot of minor fixes and UX improvements. Now also available on Flathub!! 🙂 Learn more at: https://fluffychat.im 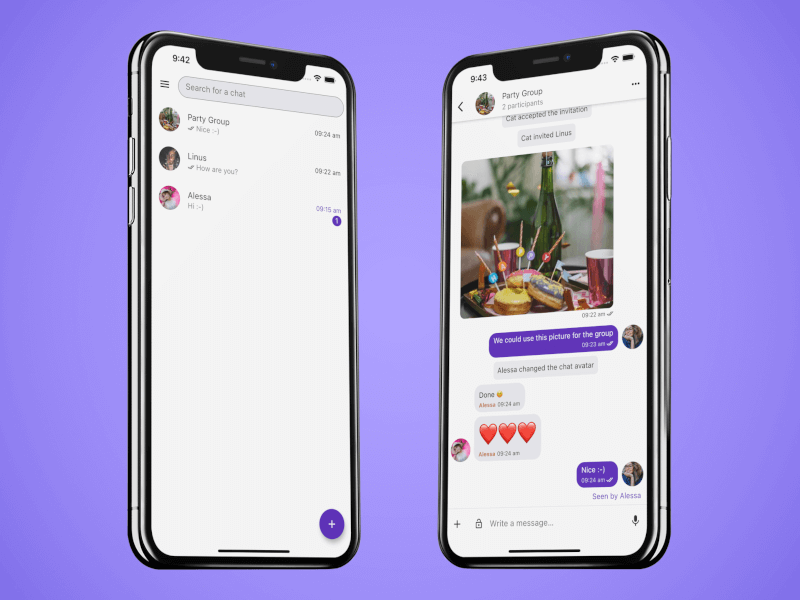 Spaces UI designs & user research testing are underway, with initial development for the Element Web client kicked off too. We've been doing research & testing in private to avoid advance bias from the people we're testing with, but hope to share things publicly soon.

Social login is in review for Element Web, with synapse & mobile support hot on the tails for next week prior to releasing.

We’ve been focusing on implementing UI for call holding, and general UI polish across the VoIP experience, to be released soon!

Element Web 1.7.14 was released this week, which includes:

The Element Android 1.0.11 release is pending:

In addition to boring stuff like being able to persist events (hopefully) right, so we don't have to initial-sync every launch, I've been making a start towards multi-account support!

You can sign in as multiple users and switch between the "active" user you want to send messages as - iit's a bit flaky for now, esp. when scrolling up to read past messages, but hey it's a start I guess

Asked if they were using an SDK:

Preeetty much doing it from scratch, though I am loosely basing the matrix-api side of it on Ruma

Ruma is a set of Rust library crates around Matrix.

We gained a new contributor, kiwidu38, who added the server-default push rules, paving the way to Conduit supporting push notifications.

I improved compatibility with some commonly-broken DAG events and added rudimentary support for message edits to help Fractal finish their move onto matrix-rust-sdk.

I published the second part of the Matrix introduction series on my blog (in German). It deals with end-to-end encryption, contact verification and cross signing. https://blog.sp-codes.de/sichere-chats-mit-matrix-matrix-teil-2/.

I have not read this series so I must trust that Samuel is saying nice things! Anyway it seems like a useful resource for telling kameraden about getting started with Matrix.

Today there is a German article about Famedly on Gründerszene -> https://www.gruenderszene.de/health/famedly-kommunikation-app-gesundheitswesen. Famedly is developing a solution based on Matrix to enable healthcare providers to communicate securely with each other and to facilitate intersectoral processes such as patient transfers or the integration of IomT devices. We have also almost completed a successful financing round and hope to support the Matrix ecosystem more and more. It would be so cool to use FluffyChat, Element, or a Matrix Messenger of your choice to start a video consultation with the doctor of your choice, or to be integrated into existing clinical communication flows concerning you!

Congratulations to Famedly on the progress they're making! If you're ready to graduate from TLAs (Three-Letter-Abbreviations) to the next stage, you'll be please to learn "IomT", which means "Internet of medical Things".