It’s been just over 2 months since we revealed that Gitter was going to join Matrix - and we are incredibly proud to announce that Gitter has officially turned on true native Matrix connectivity: all public Gitter rooms are now available natively via Matrix, and all Gitter users now natively exist on Matrix. So, if you wanted to join the official Node.js language support room at https://gitter.im/nodejs/node from Matrix, just head over to #nodejs_node:gitter.im and *boom*, you’re in!

This means Gitter is now running a Matrix homeserver at gitter.im which exposes all the active public rooms - so if you go to the the room directory in Element (for instance) and select gitter.im as a homeserver, you can jump straight in: 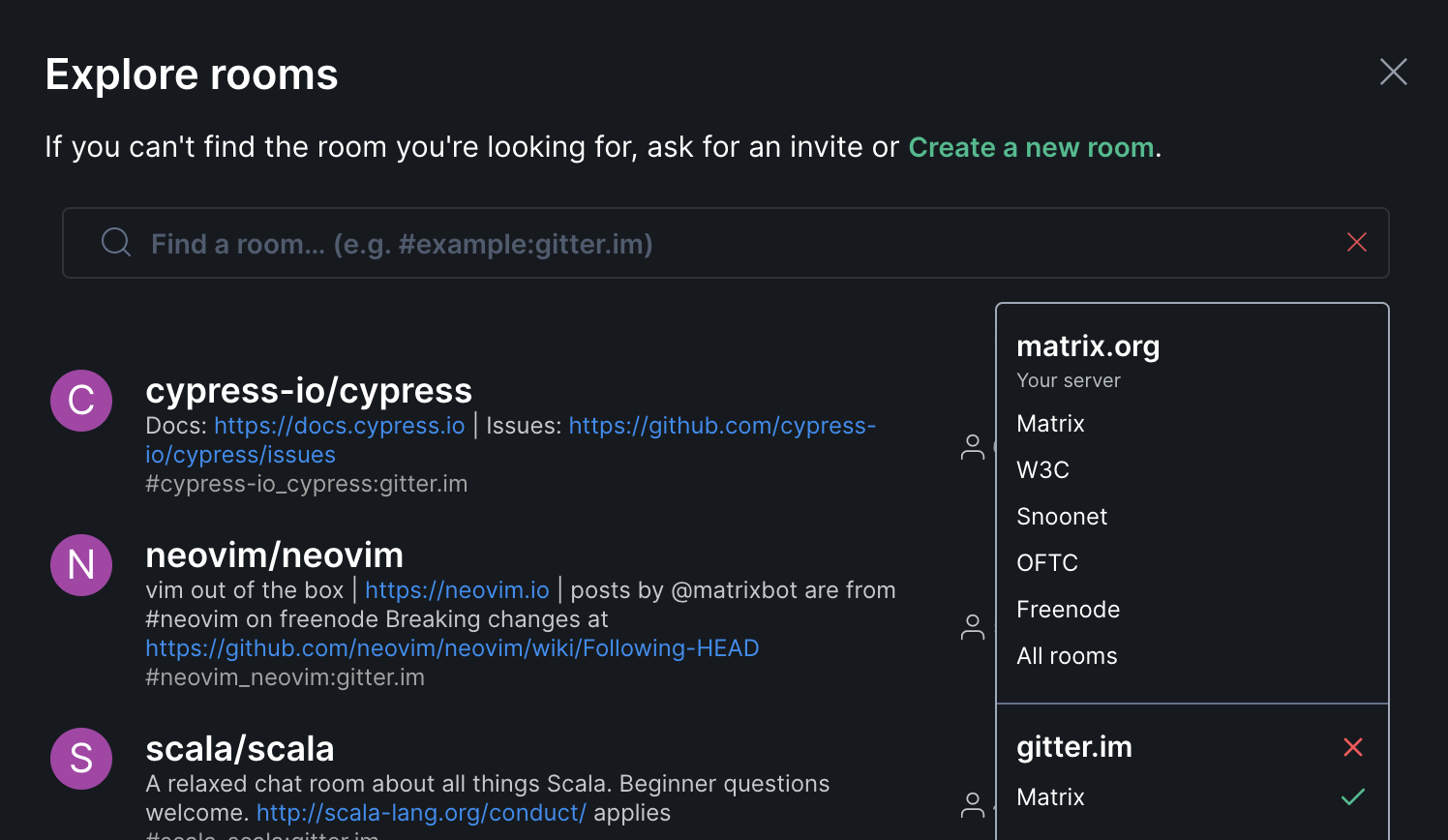 Once you’re in, you can chat back and forth transparently between users on the Gitter side and the Matrix side, and you no longer have the ugly “Matrixbot” user faking the messages back and forth - these are ‘real’ users talking directly to one another, and every public msg in every public room is now automatically exposed into Matrix.

So, suddenly all the developer communities previously living only in Gitter (Scala, Node, Webpack, Angular, Rails and thousands of others) are now available to anyone anywhere on Matrix - alongside communities bridged from Freenode and Slack; the native Matrix communities for Mozilla, KDE, GNOME communities etc. We’re hopeful that glueing everything together via Matrix will usher in a new age of open and defragmented dev collaboration, a bit like we used to have on IRC, back in the day.

This is also great news for mobile Gitter users - as the original mobile Gitter clients have been in a holding pattern for over a year, and native Matrix support for Gitter means they are now officially deprecated in favour of Element (or indeed any other mobile Matrix client).

What features are ready?

Now, this is the first cut of native Matrix support in Gitter: much of the time since Gitter joined Element has been spent migrating stuff over from Gitlab to Element, and it’s only really been a month of work so far in hooking up Matrix. As a result: all the important features work, but there’s also stuff that’s yet to land:

Stuff we’re not planning to support:

For more details, we strongly recommend checking out the native Matrix epic on Gitlab for the unvarnished truth straight from the coal-face!

How do you make an existing chat system talk Matrix?

In terms of the work which has gone into this - Gitter has been an excellent case study of how you can easily plug an existing large established chat system into Matrix.

At high level, the core work needed was as simple as:

In practice, Eric (lead Gitter dev) laid out the waypoints of the full journey:

Meanwhile, the Matrix side of gitter.im is hosted by Element Matrix Services and is a plain old Synapse, talking through to Gitter via the Application Service API. An alternative architecture would be to have got Gitter directly federating with Matrix by embedding a “homeserver library” into it (e.g. embedding Dendrite). However, given Dendrite is still beta and assumes it is storing its data itself (rather than persisting in an existing backend such as Gitter’s mongodb), we went for the simpler option to start with.

It’s been really interesting to see how this has played out week by week in the Gitter updates in This Week in Matrix: you can literally track the progress and see how the integration came to life between Oct 9, Oct 23, Nov 6, Nov 27 and finally Dec 4.

Huge thanks go to Eric Eastwood, the lead dev of Gitter and mastermind behind the project - and also to Half-Shot and Christian who’ve been providing all the support and review from the Matrix bridging team.

First and foremost we’re going to be working through the “What remains” section of the list above: killing off the old bridge, sorting out plumbed rooms, hooking up DMs, importing old Gitter history into Matrix, etc. This should then give us an exceptionally low impedance link between Gitter & Matrix.

Then, as per our original announcement, the plan is:

In the medium/long term, it’s simply not going to be efficient for the combined Element/Gitter team to split our efforts maintaining two high-profile Matrix clients. Our plan is instead to merge Gitter’s features into Element (or next generations of Element) itself and then - if and only if Element has achieved parity with Gitter - we expect to upgrade the deployment on gitter.im to a Gitter-customised version of Element. The inevitable side-effect is that we’ll be adding new features to Element rather than Gitter going forwards.

Now, that means implementing some features in Matrix/Element to match...

...and this work is in full swing:

The only bits which aren’t already progressing yet are tighter GL/GH integration, and better search engine optimised static archives.

So, the plan is to get cracking on the rest of the feature parity, then merge Gitter & Element together - and meanwhile continue getting the rest of the world into Matrix :)

We live in exciting times: open standards-based interoperable communication is on the rise again, and we hope Gitter’s new life in Matrix is the beginning of a new age of cross-project developer collaboration, at last escaping the fragmentation we’ve suffered over the last few years.

Finally, please do give feedback via Gitter or Matrix (or mail!) on the integration and where you’d like to see it go next!

Thanks for flying Matrix and Gitter,

What features are ready?
How do you make an existing chat system talk Matrix?
What’s next?