Alongside all the normal business-as-usual Matrix stuff, we’ve found some time to do a mad science experiment over the last few weeks - to test the question: “Is it possible to build a serious Twitter-style decentralised microblogging app using Matrix?”

It turns out the answer is a firm “yes” - and as a result we’d like to present a very early sneak preview of Cerulean: a highly experimental new microblogging app for Matrix, complete with first-class support for arbitrarily nested threading, with both Twitter-style (“vertical”) and HN/Reddit-style (“horizontal”) layout… and mobile web support! 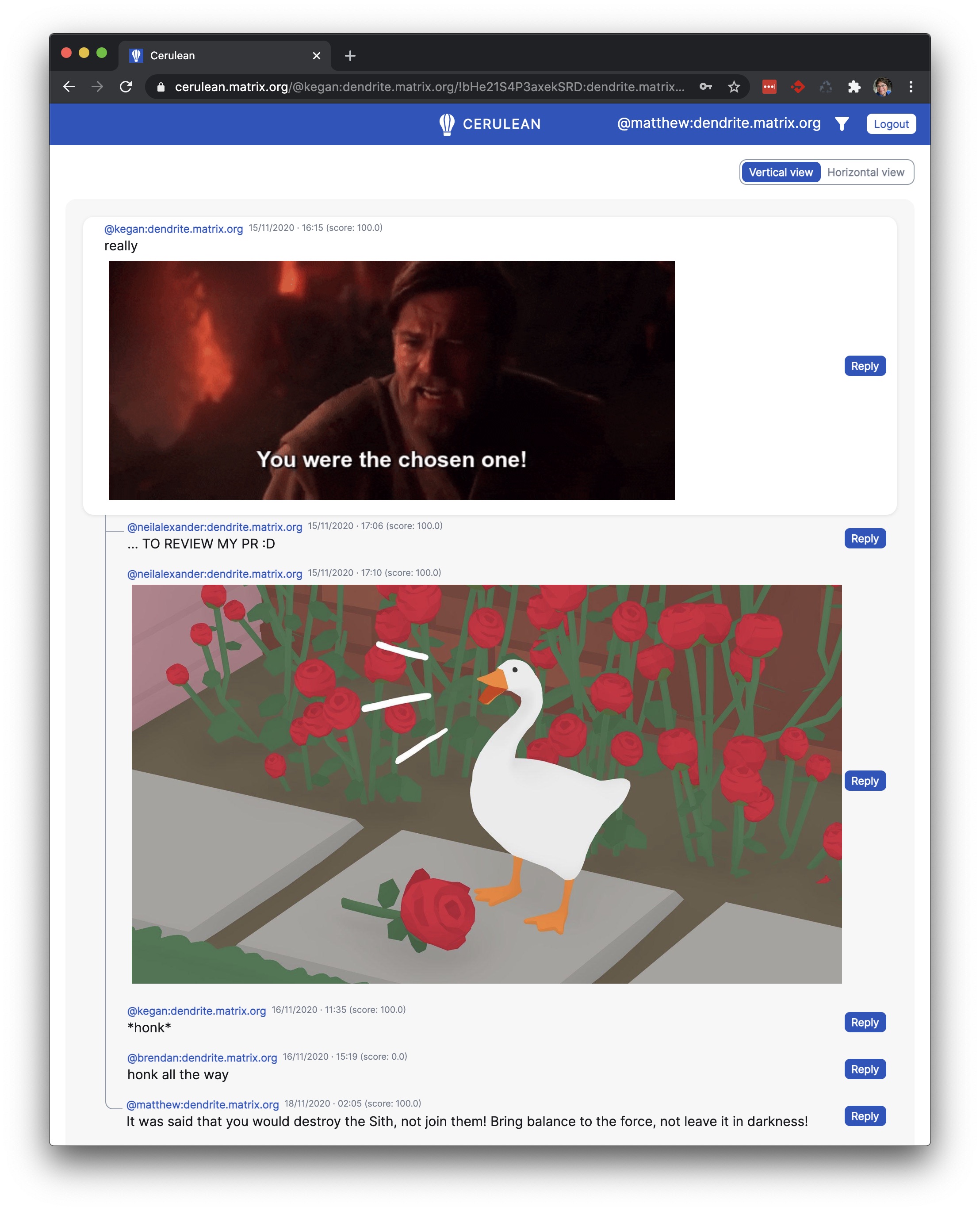 Cerulean is unusual in many ways:

This is very much a proof of concept. We’re releasing it today as a sneak preview so that intrepid Matrix experimenters can play with it, and to open up the project for contributions! (PRs welcome - it should be dead easy to hack on!). Also, we give no guarantees about data durability: both Cerulean and dendrite.matrix.org are highly experimental; do not trust them yet with important data; we reserve the right to delete it all while we iterate on the design.

What can it do?

So for the first cut, we’ve implemented the minimal features to make this something you can just about use and play with for real :)

Obviously, there’s a huge amount of stuff needed for parity with a proper Twitter-style system:

How does it work?

Every message you send using Cerulean goes into two Matrix rooms, dubbed the "timeline" room and the "thread" room. The "timeline" room (with an alias of #@matthew:dendrite.matrix.org or whatever your matrix id is) is a room with all of your posts and no one else's. The "thread" room is a normal Matrix room which represents the message thread itself. Creating a new "Post" will create a new "thread" room. Replying to a post will join the existing "thread" room and send a message into that room. MSC2836 is used to handle threading of messages in the "thread” room - the replies refer to their parent via an m.relationship field in the event.

These semantics play nicely with existing Matrix clients, who will see one room per thread and a flattened chronological view of the thread itself (unless the client natively supports MSC2836, but none do yet apart from Cerulean). However, as Cerulean only navigates threaded messages with an m.reference relationship (eg it only ever uses the new /event_relationships API rather than /messages to pull in history), normal messages sent by Matrix into a thread or timeline room will not yet show up in Cerulean.

In this initial version, Cerulean literally posts the message twice into both rooms - but we’re also experimenting with the idea of adding “symlinks” to Matrix, letting the canonical version of the event be in the timeline room, and then the instance of the event in the thread room be a ‘symlink’ to the one in the timeline. This means that the threading metadata could be structured in the thread room, and let the user do things like turn their timeline private (or vice versa) without impacting the threading metadata. We could also add an API to both post to timeline and symlink into a thread in one fell swoop, rather than manually sending two events. It’d look something like this: 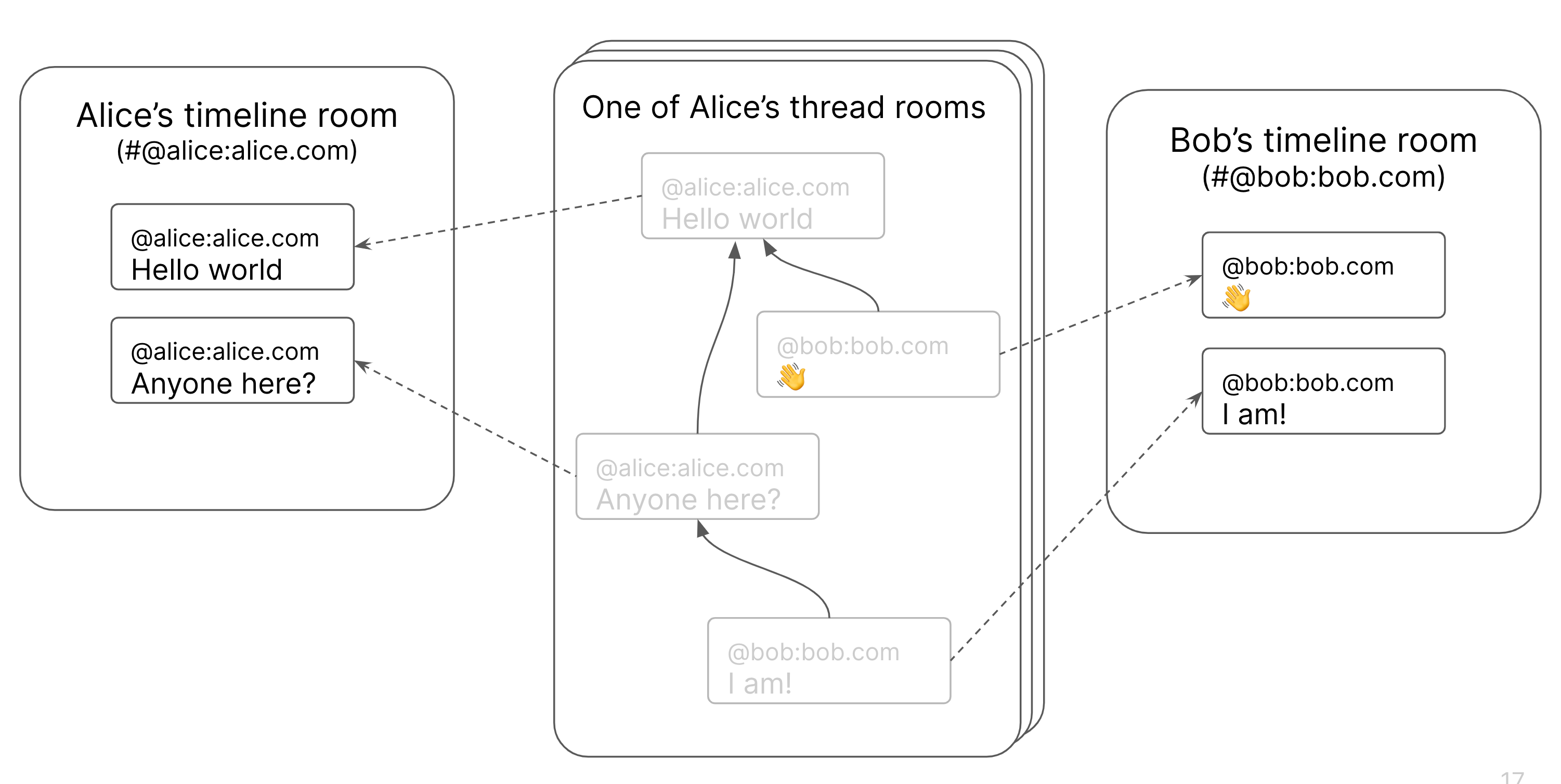 We also experimented with cross-room threading (letting Bob’s timeline messages directly respond to Alice’s timeline messages and vice versa), but it posed some nasty problems - for instance, to find out what cross-room replies a message has, you’d need to store forward references somehow which the replier would need permission to create. Also, if you didn’t have access to view the remote room, the thread would break. So we’ve punted cross-room threading to a later MSC for now.

Needless to say, once we’re happy with how threading works at the protocol level, we’ll be looking at getting it into the UX of Element and mainstream Matrix chat clients too!

What’s with the decentralised reputation button?

Cerulean is very much a test jig for new ideas (e.g. threading, timeline rooms, peeking), and we’re taking the opportunity to also use it as an experiment for our first forays into publishing and subscribing to reputation greylists; giving users the option to filter out content by default they might not want to see… but doing so on their own terms by subscribing to whatever reputation feed they prefer, while clearly visualising the filtering being applied. In other words, this is the first concrete experimental implementation of the work proposed in the second half of Combating Abuse in Matrix without Backdoors. This is super early days, and we haven’t even published a proto-MSC for the event format being used, but if you’re particularly interested in this domain it’s easy enough to figure out - just head over to #nsfw:dendrite.matrix.org (warning: not actually NSFW, yet) and look in /devtools to see what’s going on.

So, there you have it - further evidence that Matrix is not just for Chat, and a hopefully intriguing taste of the shape of things to come! Please check out the demo at https://cerulean.matrix.org or try playing with your own from https://github.com/matrix-org/cerulean, and then head over to #cerulean:matrix.org and let us know what you think! :)

What can it do?
How does it work?
What’s with the decentralised reputation button?