This week we're all about video content! So you get Matrix Live AND Demos - you are so lucky! 🥰

uhoreg added a late improvement to his MLS demo:

This is how my demo would have looked if I had managed to finish debugging in time.

So, now you need to watch the video to make sense of this image!

Introducing Cerulean - highly experimental threaded microblogging for Matrix. Read all about it at https://matrix.org/blog/2020/12/18/introducing-cerulean

Cerulean is being discussed on the front page of Hacker News.

The last set of community demos were well received, so if you have an idea for a demo, get it ready for 2021-01-15, which will be the next demo session!

The spec core team has been trying out the new spec this week to decide if it's ready to ship. And we've been applying Dean's design updates (currently in a separate branch at https://friendly-yonath-3de225.netlify.app/).

In terms of Spec Core Team MSC focus for this week, we made a healthy amount of progress on the MSCs in focus. A few members have also been iterating quite a bit on MSC1772 for Spaces. Look for these MSCs to start landing come the first few weeks of the New Year as implementation work starts to relax a bit. The focus for next week is... Christmas! 🎄 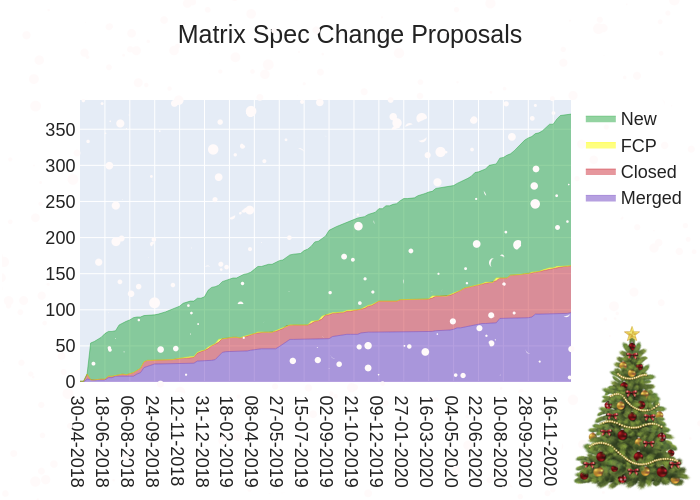 If you haven't already seen it, we wrote a Dendrite 2020 Progress Update blog post detailing our year in Dendrite. It also includes an announcement for our new public dendrite.matrix.org homeserver, which is open for registration!

Today we released Dendrite 0.3.4, which is a performance and bug-fix release, including the following changes from the last two weeks:

Hello again from Synapse land! This is our last TWiM of 2020, but we're hard at work landing our last patches before going on holiday. Expect 1.25.0rc1 in early January with loads of fixes, performance improvements, and a few new features. In particular:

You can look forward to all of this and more next year, but until then, happy holidays from all of us over here at Element and in the broader Synapse community!

Hey, I'm back! I was busy with University. I also forgot to TWIM this last week, so here you go:

Synapse integration had been updated to 1.23.1

Element Web integration had been updated to 1.7.15

Hello everyone! It's been ages since I've talked about a personal project on here. I've been working on the matrix-github bridge, which is an all singing all dancing service to connect you to Github AND Gitlab. (Yes, it's now poorly named).

I've landed the initial bits to make GitLab work, so that you can join issues and MRs as rooms in the UI but there is more work to do to make that solid and more interactive. The thing I am most looking forward to is notifications for GitLab so I can get away from emails.

ALSO, off the back of TravisR's fantastic widget work, I've landed initial support for widgets in admin rooms and soon issue/PR rooms. The idea here being that widgets give you a nicer UI to control the bridge or render details like commits going past or diffs. All the groundwork for authenticating widgets against the bridge and rendering them is done, now it just needs features.

That's the highlights this week. I'm hoping to really tighten the documentation to get more people spun up on it as the notifications features have turned out to be a killer feature for me :) 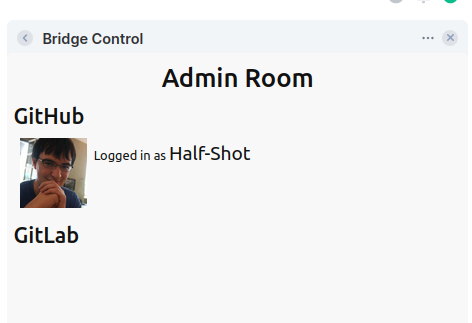 I've been using this (the bridge, rather than the upcoming widgets) for a couple of months now and find it really really powerful. I'm not in GitHub most of the day, so getting notifs piped direct into Matrix is great!

I added bridging of typing notifications and read receipts from Matrix to Instagram and fixed a bunch of bugs. Only thing that's still missing is presence and Matrix->Instagram non-image files.

This is now almost feature complete! Nice one Tulir.

A few updates to the Gitter bridge itself this week handling Matrix edits outside of the 5 minute edit window on Gitter and fixing up @mentions being mangled by : colons on the Gitter side when someone mentions you from Element. We also strip the redundant Matrix reply quote when it goes into a Gitter threaded conversation because it's already easily viewable in the thread.

Other teams are already underway working on Spaces, Social login for Github which will ship in the new year!

Compiled by the team.

In celebration of the cross-signing MSC being finally merged, Nheko master now supports cross signing other users and your own devices. 🎉 The UX is currently not final, you have to manually fetch the cross signing keys in the settings, if you don't have them after a verification. You are also not yet prompted to verify new logins and can't bootstrap cross-signing from Nheko, but the functional bits and bobs are there now. We are also still investigating, if prompting for your recovery key/passphrase is less confusing by using just one input field or if we should prompt for them separately. Currently Nheko just asks you to unlook and will accept whatever you input (if it can decrypt the secrets with it). FluffyChat does that and I think it is really nice!

There are also a few smaller features added recently:

Today, we can announce the web/desktop variant of SchildiChat is out of beta!

Since the last announcement on TWIM, we have not only fixed most of the layout bugs caused by the message bubbles, but can also report the following: 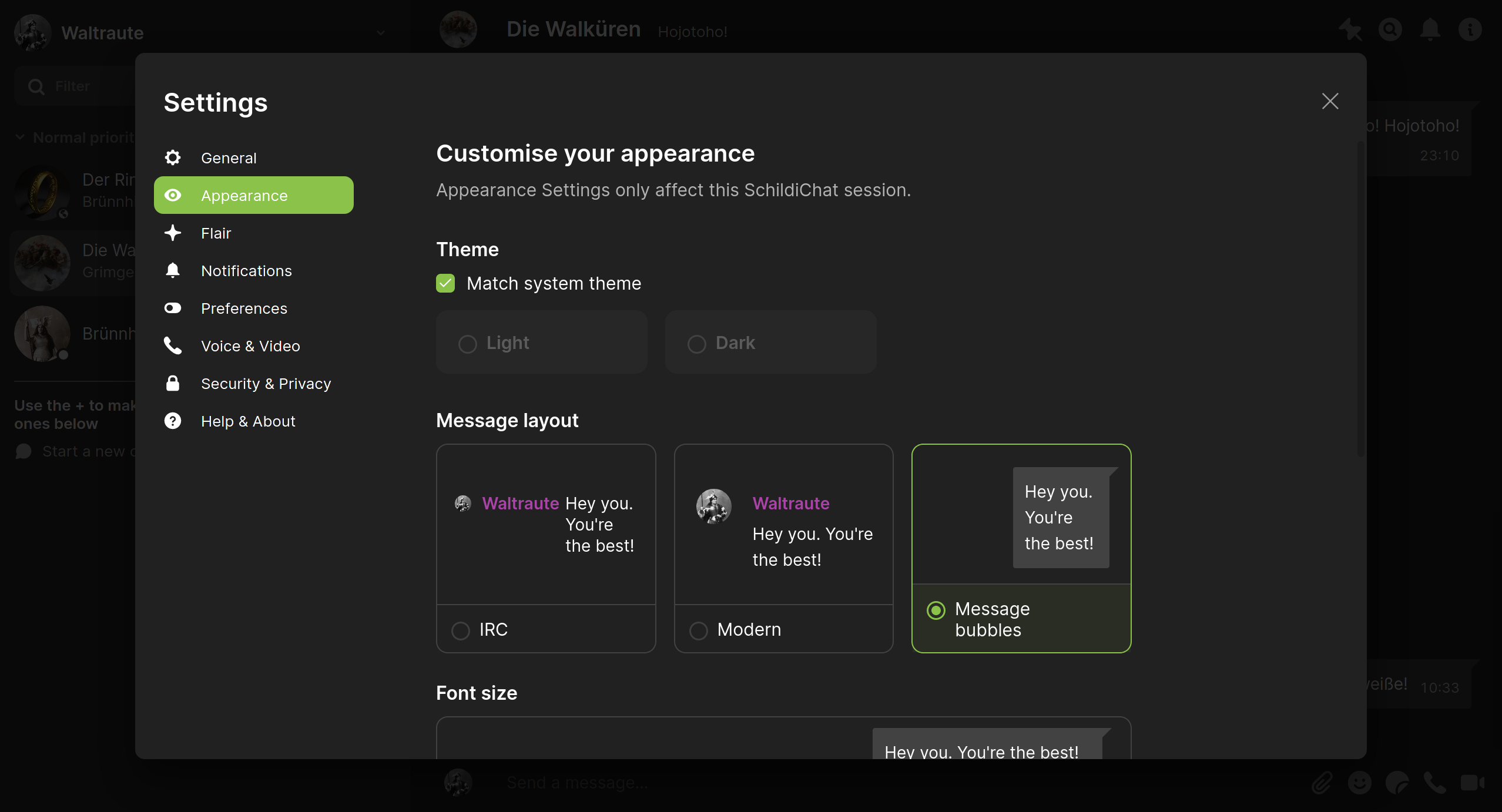 FluffyChat 0.24.0 is released with new features and fixes.

Beside of that we have of course a lot of bug fixes and stability improvements. All languages should now also work on iOS.

Also we are looking forward to publish the app in the AppStore for iOS but we will do this under the hood of Famedly. Btw. FluffyChat will soon move to the Famedly GitLab project and we will move the app in the PlayStore to the Famedly account too. This doesn't mean that anything will change there. It is just that Famedly will now handle the legal stuff for us and may offer paid customer support for businesses, which have interest in FluffyChat. But the app will still be available under the same AGPL3 license. This will just make it easier for us to publish the app in the official stores as we don't need to pay so much for the developer accounts. 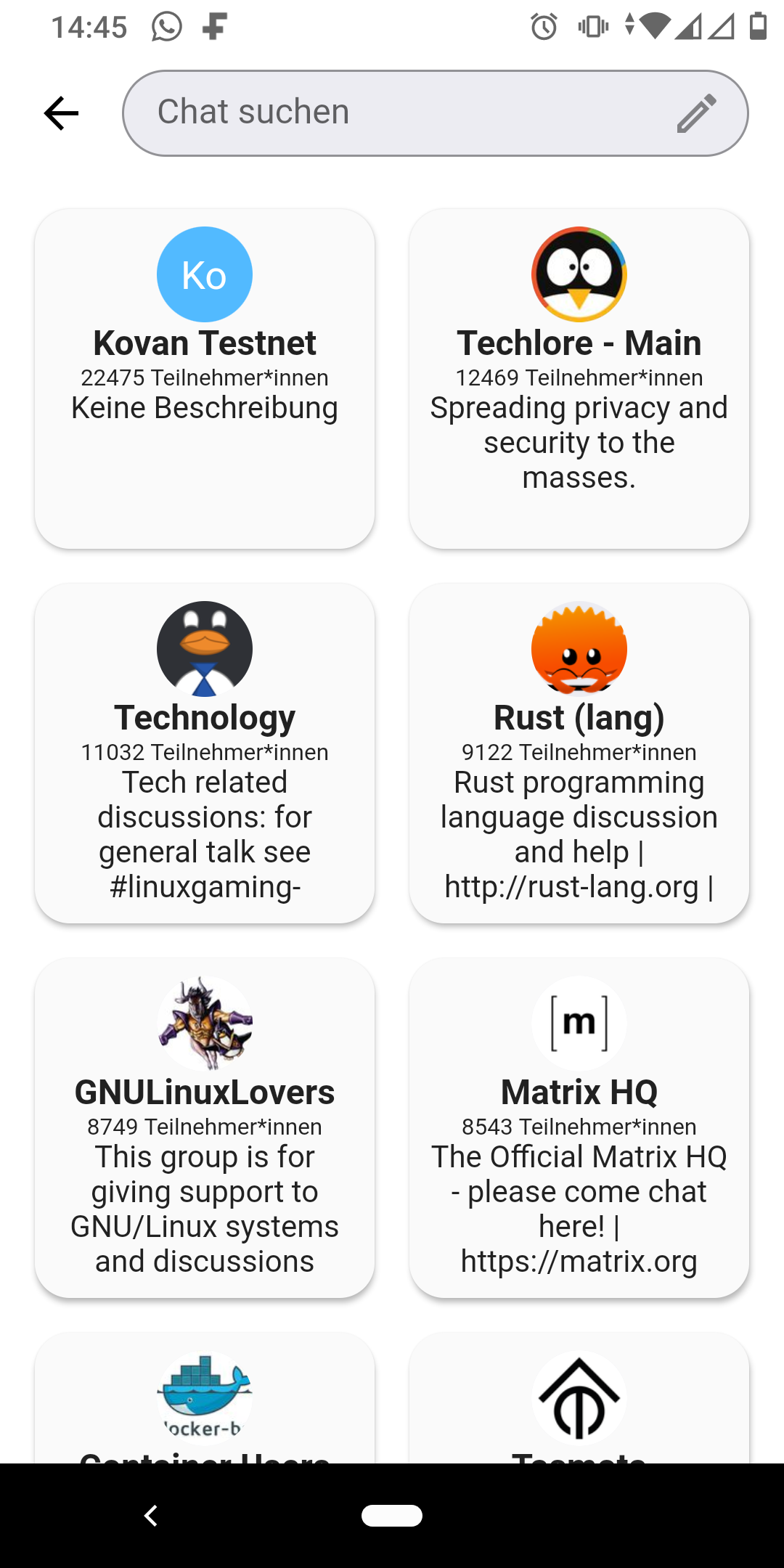 Numerous new features and fixes arrived this week. Getting closer to production readiness. Famedly also started daily internal testing for the bot to find more issues and fixing them.

It's the most wonderful time of the year! The ⛄️ winter edition of Games Done Quick is almost upon us. This recurring speedrunning event helps raise money for charity each year. As usual, the proceeds of the week long AGDQ are going to the Prevent Cancer Foundation. With some luck we might break last year's $3.13 million record.

To help you keep track of the event I've created GDQBot. Right now you can use it to query for the schedule. Next week should see the code land to add the announcer routine so the bot will announce events as they happen to channels its invited to.

Also a big thank you to tulir for patiently answering my questions as I was trying to find my way around mautrix-go.