Earlier this week we released Dendrite 0.3.5, our first release of 2021, which includes a fairly significant refactor of parts of the sync API, along with other fixes. More work has since been merged into master too.

Changes in the last two weeks include:

Spec compliance is at:

Can you explain something: Dendrite federation is basically working fine, AIUI, what does it mean that Server-server APIs is <100%?

There are still some edge-case tests that we haven't got passing yet, but I think that's only ~20 tests or so.
There are also a few tests which are quite sensitive to exactly what Synapse does/returns, even though Dendrite is probably doing the right thing but maybe taking a different amount of time to do it or returning something slightly different, so there'll be some tests we need to fix too

We're on track for 1.26.0rc1 next week, which includes a massive speedup for message redaction in large rooms, as well as finally landing fundamental algorithmic improvements to state resolution.

Otherwise, we remain hard at work preparing for FOSDEM-on-Matrix, with special emphasis on improving our stability and moderation capabilities at scale. See y'all next week!

Just pushed version 1.25.0 of Synapse for my Kubernetes image and chart. Haven't quite had the time to finish up the redo of the scripts, but expect that 1.25.0 will be the last version with a specific image, I'm hoping to have generalized the chart enough that it should work with any reasonable image at that point.

A few improvements to the Gitter bridge this week so that when a room updates and the avatar or topic changes, it now propagates across to Matrix automatically. We also handle updating the name whenever we have to rename a room or a group.

We're also thinking about how best to tackle self-service plumbing so you can pipe a Gitter room into your existing Matrix room. And the bigger idea of connecting various bridged portal rooms together. So you can connect your community on Gitter <-> Matrix <-> IRC seamlessly for example. The current thinking is introducing this as a native Matrix concept so you can easily connect any Matrix room to another Matrix room. We'd love to hear your thoughts in MSC2923.

Version 2 of mx-puppet-groupme is here! This week I did some reverse engineering of the GroupMe Android app with mitmproxy so that I could work out the remaining undocumented features of GroupMe's API. As a result, typing notifications, read receipts, and videos are now working! Though note that due to limitations of the platform, read receipts are a DMs-only feature.

We also now have a Dockerfile (thanks, Trey B.!), double puppeting support was added, the code was ported to Typescript, and it should now work with older versions of Node. So at this point the bridge is basically feature-complete! As usual, send any questions, bugs, or feature requests to GitLab or Matrix. 💜

I've been working on moving mautrix-facebook to act as a Messenger mobile app instead of the web app in order to hopefully make it more reliable. The initial version is starting to work now.

It's currently in the mobile branch. I'm not actually sure if it helps with facebook forcing password resets (for some reason they've never done that to my account), but if it does, I'll merge it into master in the near future.

The new version only supports Postgres like my newer bridges, but I'll invent a SQLite migration tool before merging to master.

NeoChat 1.0.1 was released with a few important bugfixes. https://carlschwan.eu/2021/01/13/neochat-1.0.1-first-bugfix-release/. On the unstable branch, we continued to improve the integration with Plasma. We now display the unread count in the taskbar and we are getting inline replies too thanks to the work of Kai Uwe Broulik in Knotifications. Another important change is that rooms can now be opened in a new separate window. 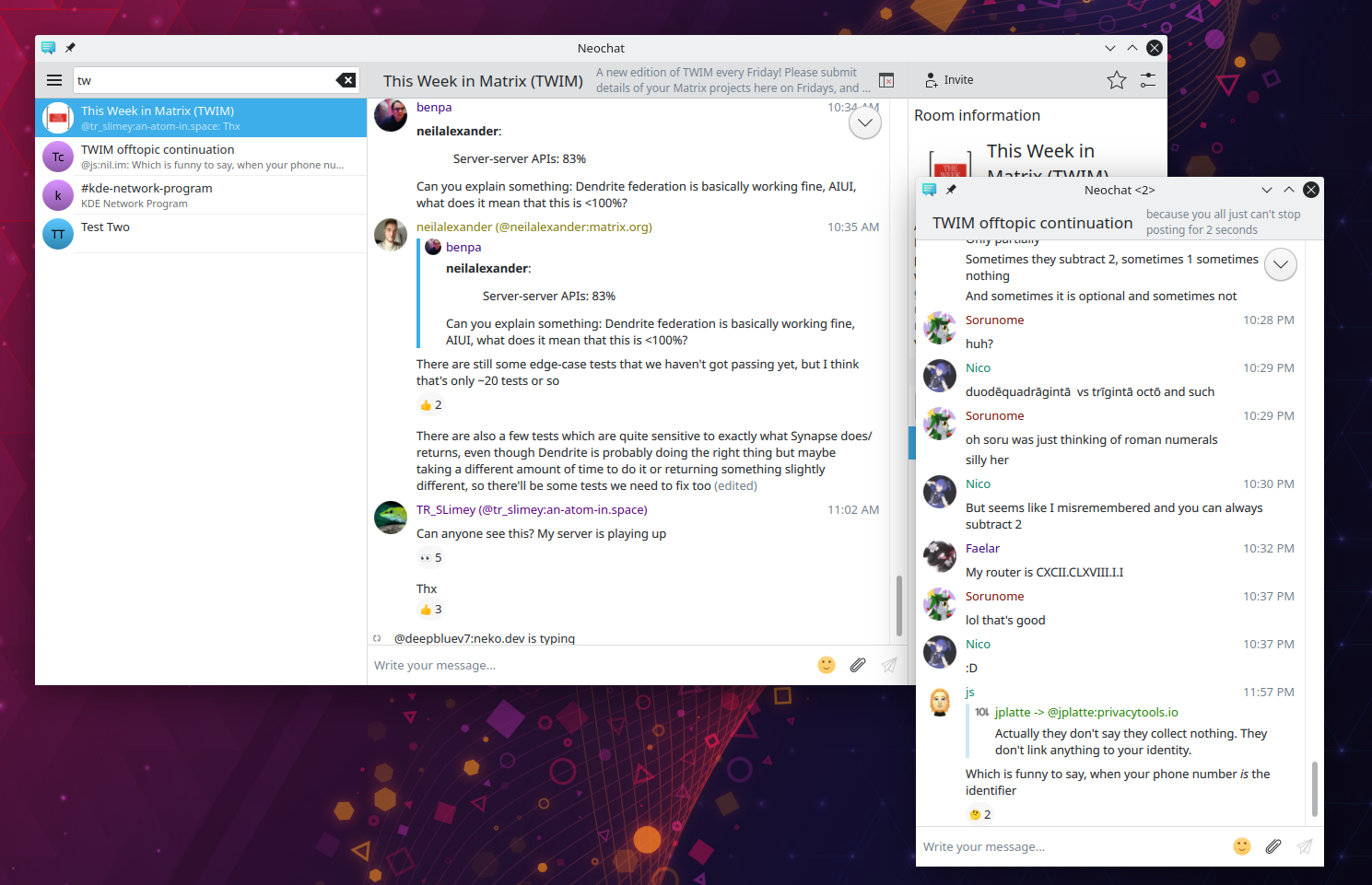 Bugfixing for the next release is in progress, fixing various issues and instabilities introduced with the new features, but some smaller features also still made it in:

Since we are nearing the next release, it would be appreciated, if you could check the translations for your platform are up to date and try the current nightlies and check them for bugs your experience and want to have fixed before release. If you find anything, please report it on GitHub or discuss it in #nheko:ocean.joedonofry.com. Thank you!

I'd like to have announced the next beta release for Quaternion 0.0.9.5 - unfortunately, migrating from Travis CI took more than I wanted; but adventurous souls are welcome to test the master branch that's basically ready for beta 3.

Meanwhile, it surfaced that Quaternion 0.0.9.4e Windows binaries have been expecting (very old and no more supported) OpenSSL 1.0. This is now fixed in Quaternion 0.0.9.4f (hopefully this will be the last 0.0.9.4 rebuild and I won't chase the above-mentioned OpenSSL project in trying to expire Latin letters).

Various updates from the teams:

On Web, we’re progressing on Spaces on our big checklist of doom, most recently on implementing invites to Spaces. On Android, we’re also progressing, iterating on the UX. Meanwhile, we’re also experimenting with different ways to explore, manage and navigate nested spaces.

We’ve now merged support for multiple identity providers on Synapse, and are getting dangerously close to finishing the rest of the implementation. Watch this space for more news soon!

Element Web 1.7.17-rc.1 is now available at https://staging.element.io, including:

Element iOS 1.1.4 has been submitted to the AppStore. A TestFlight build will be available during the week-end. Main things the release offers are:

Version 0.6.4 is out, with a few fixes around homeserver resolution (particularly when a .well-known record is not there). These has been made in tight collaboration with the folks behind Neochat - thanks a lot! 0.6.4 is also the best version to build the just-released Neochat 1.0.1 with.

Meanwhile, work on the next version (0.7) is proceeding in the unstable branch (not in the least pushed by Neochat activity) - expect more news in the next weeks.

PingPong measures transport latencies on Matrix networks. It connects to two Matrix accounts simultaneously, and bounces messages back and forth between them. It aggregates all information in an intuitive terminal user interface, and automatically computes statistics. Source code and more information are available at https://github.com/p-e-w/pingpong.

I have been working on this for a while now and I believe it is ready for others to use at this point. No binary releases yet, the program must be built from source. I only have a Linux development system currently, so feedback on whether it works on macOS and especially Windows is very welcome.

Very interesting new project! I'm thinking of setting this up as I'd planned to write something similar to track perf on bpulse.org.

A small update on what is happening after a long time of nothing:

As you will see there are only empty categories. This is due to the registration bot still being in work as well as missing documentation for it.

For the progress you can also take a look at https://github.com/keymaker-mx/keymaker/projects/1

Join development and discussions at #serverlist:nordgedanken.dev Check out the Code at: https://github.com/keymaker-mx 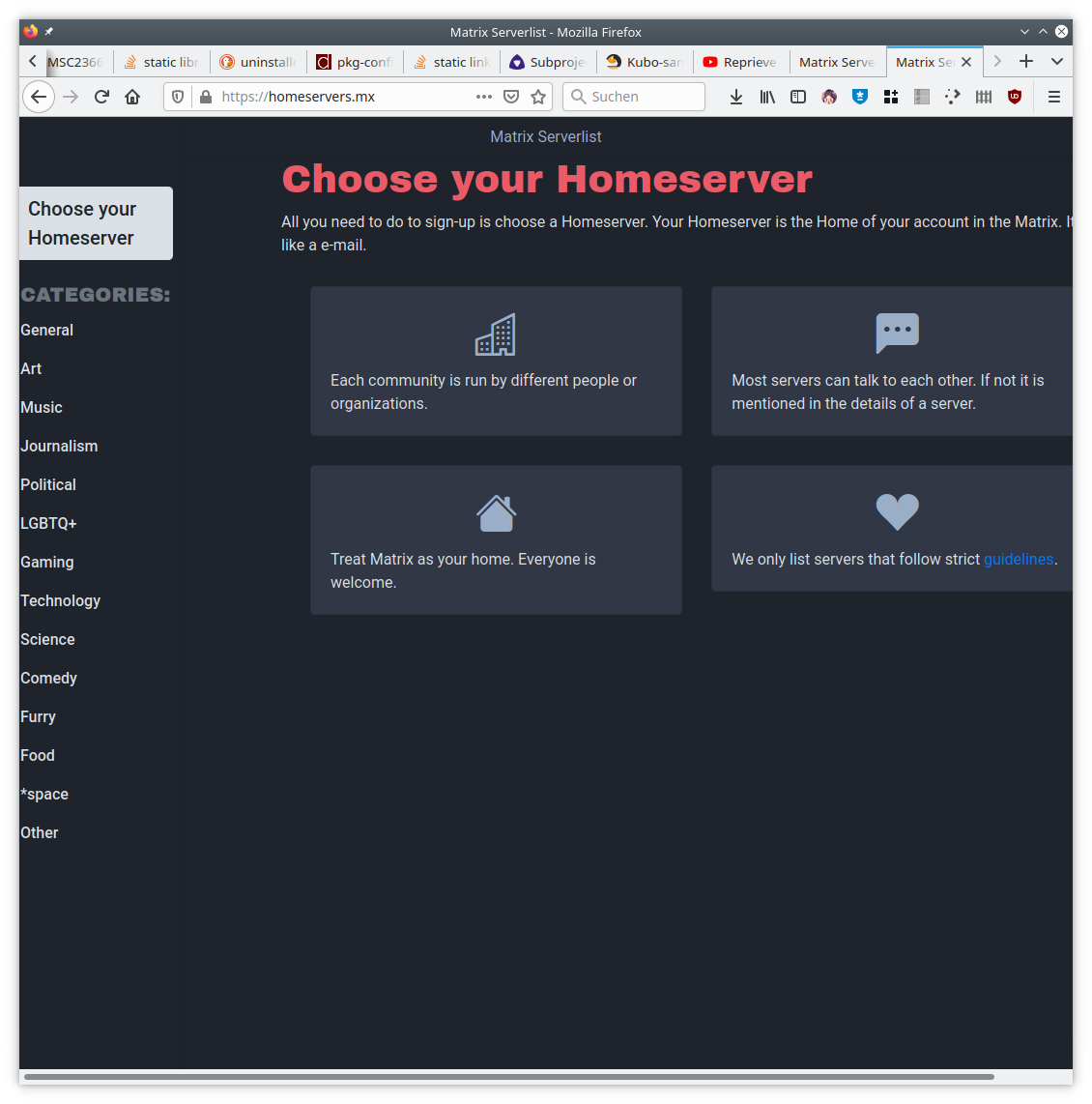 This is really awesome progress! Not quite there but we'll keep a close watch. 👀

Soru worked on updating her e2ee implementation guide, so far it contains a new section on bootstrapping and hopefully soon on online key backup! You can find the WIP MR here.