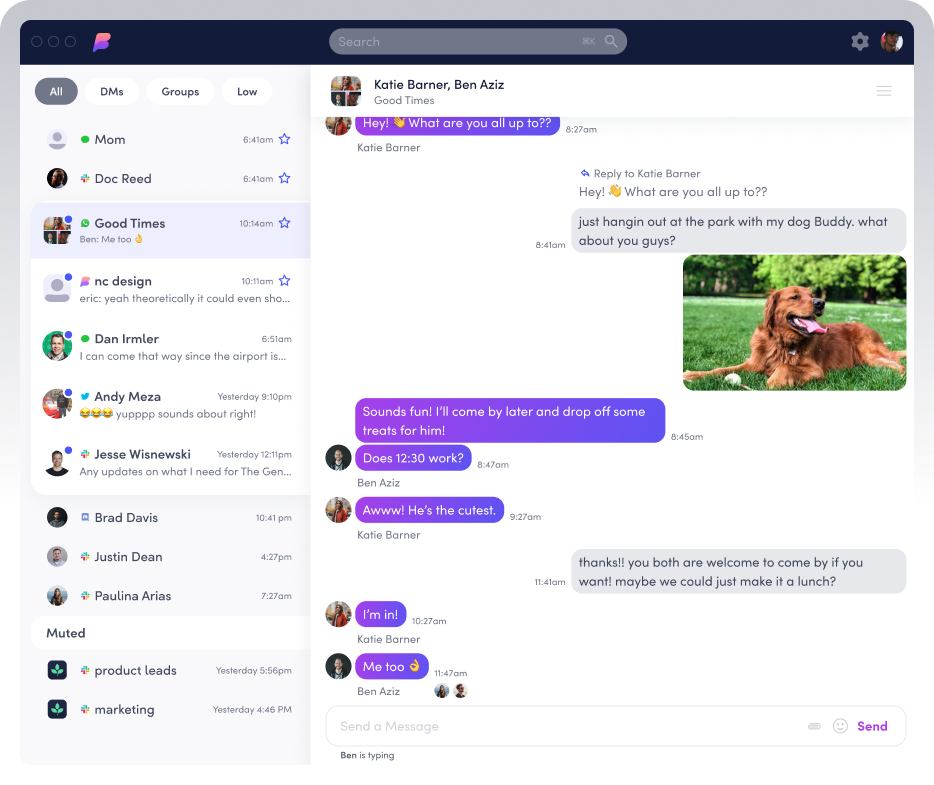 Google Summer of Code has come around again! Last year was really successful for Matrix: six projects, with members of the community coming forward to mentor students for their project. This year there is a slight tweak to the formula: the projects will now be 175 hours, rather than the traditional 350, over the summer.

Since we need to submit an application to Google within the next few weeks, I have a request: if you admin a Matrix-related Open Source project and would like to have a student work with you over the summer, get involved!

How to do this:

Matrix URI scheme proposal has FCP proposed now - if any of you, the readers of this, have anything to say about it that wasn't said in the past 2 years, speak soon or forever hold your peace. (Ok, you're allowed to write a separate MSC if you come late with revelations.)

This has been an labour of love for kitsune, kudos on his perseverance!

We've decided to ditch the focus as it was clear that it wasn't a great indicator of progress. Once one team member has reviewed all of the focus items, they will move on to other MSCs. None of that work is reflected in the focus, and items in there often stick around while waiting on a small number of people to complete work on.

As such, we'd instead like to direct people to the Spec Core Team Backlog board, which is a better representation of the current state of things. And of course the weekly list of MSCs state changes above. 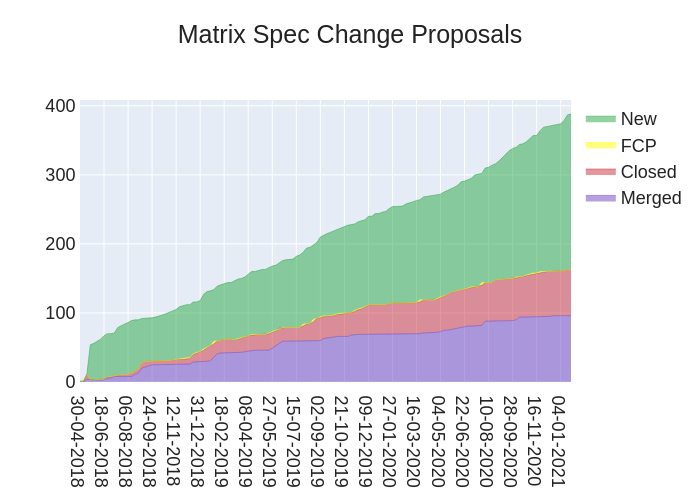 At the beginning of this week we released Dendrite 0.3.6, which included a number of refactors in the sync API and a selection of fixes. It is also the first version to be released with multi-arch Docker images with ARMv7/ARM64 targets.

Since then, the following changes have been merged:

Spec compliance is at:

Otherwise, once 1.26.0 is released you can look forward to a new algorithm for calculating auth chain difference in v2 State Resolution which should significantly speed up some of the most expensive state resolution calculations (#8622).

We've also dramatically improved the performance of redactions in large rooms, helping Synapse's moderation tools scale to communities of any size (#9022). And speaking of scaling, Synapse 1.26 makes it possible to offload many different APIs to worker processes, including read receipts and account data persistence.

Lastly, Synapse 1.26 will include support for multiple Single Sign-On Identity providers, though we expect further fit-and-finish for that feature to land in 1.27.

You can preview the changelog and upgrade notes now, but remember: wait for rc2! 😉

The switch to acting as a mobile app I mentioned last week has been merged and it's starting to be clear that it works better. So far logging in has worked fine for everyone at least after enabling 2FA.

Changes this week mostly included tons of bugfixes (thanks to everyone who already updated and found the bugs) and re-adding some old features like read receipt bridging. The SQLite migration script now exists too. Upgrade instructions can be found at https://github.com/tulir/mautrix-facebook/wiki/Upgrading-to-v0.2.0

Cheers everyone! On Wednesday we released version 0.8.0 of Nheko! The changelog is far too long, because so many people contributed (and it has been a while since the last release), so I'll just put some highlights here!

Packaging is currently in progress, but it will probably take a bit. In the mean time you can download the release from here: https://github.com/Nheko-Reborn/nheko/releases/tag/v0.8.0

Please tell us, what you think and report bugs as you find them! And thanks again to all the contributors! It was a great pleasure to work with you and you really made an impact!

Over and out, the Nheko team!

❤️ for the packagers!

fluffychat 0.25.0 is out with a lot of bug fixes, improvements, minor design tweaks and a new 3 column layout. iOS will skip this release until we can bring it to the AppStore next week or so 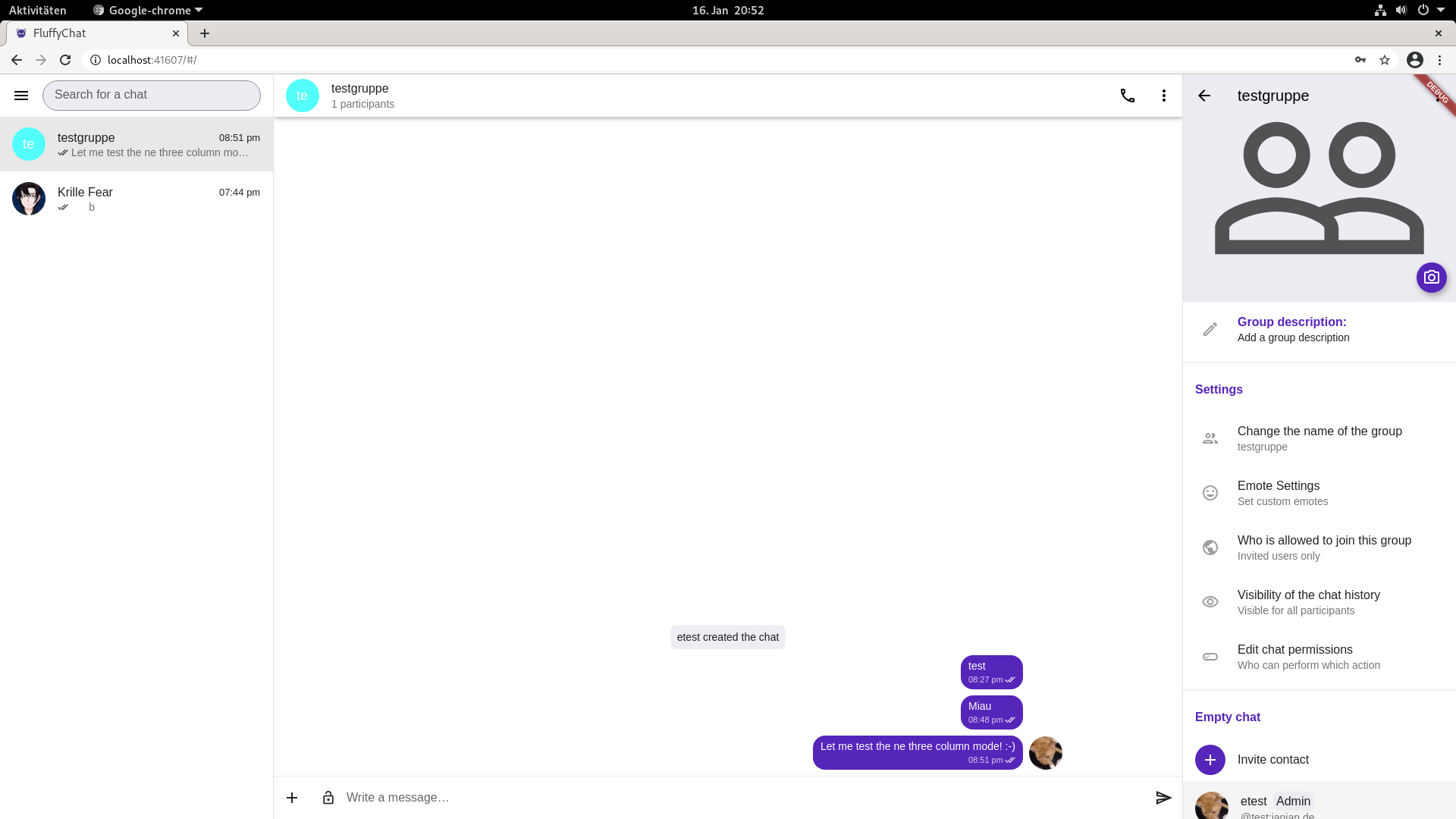 Element for Nextcloud v0.6.19 has now been released. The new update contains fixes for Single sign-on users, the ability for admins to easily show or hide the labs settings, and an update to Element Web v1.7.17.

P.S. This will be the last version to support Nextcloud 17 and 18 if you're still on those versions.

I've set up an Element Web instance on IPFS, which means that now, not even Matrix client downloads can be blocked - censorship resistance at its finest :P

It can be found at:

Updates supplied by the Teams

The release we built last week has been blocked due to push notifications issues. We are still on the case On the e2ee side, we have been working on an optimisation for the key re-share mechanism

Today a present you a Matrix client library I've been working for the last few months: caridina.

It is a Crystal library. Currently for reading it implements the sync API and supports the events to do text messaging (all state events + m.room.message). For writing it provides methods to send messages, edit them, and send receipts and typing notifications.

While I would not recommend this library to write a full featured client, it is enough to write a simple text bot. I currently use it for some of my own projects. The README provides some examples of how to use the library.

Feel free to try it, report bugs, ask for missing features if you need them or even contribute!

forward bot between matrix and tencent qq. Talk to us on #kazv:tusooa.xyz.

This week we ("tusooa and her longcat," we hope someday we can remove this annotation :P)

implemented sending and receiving encrypted events in rooms. Check a demo video below:

opsdroid is an easy to use chat-ops framework with excellent Matrix support.

This week opsdroid released version 0.20. This is a massive release that's been a long time coming because of a complete rewrite of the internals of the matrix connector to use matrix-nio---thanks to @awesome-michael for the initial work on this.

Having ported the connector to nio, our GSOC student @Tyagdit got to work polishing the nio port and reimplementing the matrix database module in the core opsdroid library. Opsdroid has a concept of memory which is a key-value store which can be backed my many different kinds of databases. The matrix database stores the opsdroid memory in room state, meaning your bot's database and messages are all stored in the same place.

Finally, the other big feature added to the matrix support in this release is End to End Encryption support. Thanks to using matrix-nio as our matrix library it was possible to implement support for encrypted matrix rooms. This also includes support in the matrix database for encrypted memory which works by referencing event ids in room state (see here for more info). As this is the first release to support E2EE I would still consider it "beta"; please open issues if you have any trouble using it.

Checkout the full release notes for all the gory details.

If you have any questions or want to get involved come say hi in #opsdroid:matrix.org, raise an issue on GitHub and checkout the docs.

A little sneak peek from trixnity, a crossplatform Matrix SDK. Currently I have some issues with ktor, which breaks my serialization.

libQuotient has initiated transition from LGPL 2.1 to LGPL 3 as its distribution license. This is partially driven by the fact that newer Qt is (mostly) distributed under LGPL 3 so the "combined work" (legalese for libQuotient including and linked with specific Qt pieces) would be covered by LGPL 3 anyway. Boring, right?

Those looking at my contributions to Quotient might have noticed the change of the primary committer's name. Don't fret, this is still me, I just shed the pseudonym (and those who've seen the interview knew my real name already).

Watch "the interview" here, where we discuss (then) progress on MSC2312 (mentioned earlier), and plenty more.

matrix-corporal manages your Matrix server according to a configuration policy

Version 2.0 of matrix-corporal has been released.

It's a huge release bringing many improvements (read all of it in the release notes).

Superb documentation from TU Dresden, as they roll out their deployment

We set up a bilingual (de, en) documentation for all of our university members, to help them get in touch with our matrix instance easily. This documentation is rich on screenshots, simple explanations and will be improved continuously.

Also we mirroring the documentation to GitHub to provide access of our sources to everyone.

We would appreciate to add further institutions of higher education with own matrix instances to our list.

Christian Bruchatz shared some additional context about their deployment growth:

Watch Matrix Live (at the top) this week for a chat with Marvin and Christian.

Deploying a Matrix server on Fedora CoreOS, from fedoramagazine.org

I couldn't find if someone else shared this, but Fedora just published an article about deploying a Matrix server on Fedora CoreOS.

The launch was also mentioned in The Register, in the UK. I used to read the Register every day...

Beeper has had substantial coverage on their launch, much of it focused especially on the iMessage bridging feature. Some articles are linked below:

Lots of people helped collect these links in #TWIM:matrix.org, thanks all!

today is the four year m.anniversary of the @sorunome:sorunome.de account! 🎉

Some interesting reads of the last few days:

btw i forgot to TWIM that there was once again long Matrix article in Finnish computer culture paper magazine Skrolli. December issue.