It's a great week for FluffyChat! I chatted with the authors, Krille and Soru, to get the latest news.

FOSDEM is happening this year, regardless of pandemics or anything else! Actually FOSDEM in my experience is a huge super-spreader event even in normal years, so it may be refreshing to know that this year it will be fully virtual, and hosted using Matrix and Jitsi!

Plus, there is a bonus talk from Brendan:

Plus, perhaps the most important part of FOSDEM: FOSDEM 2021 Matrix T-Shirt (Limited Edition) is now available 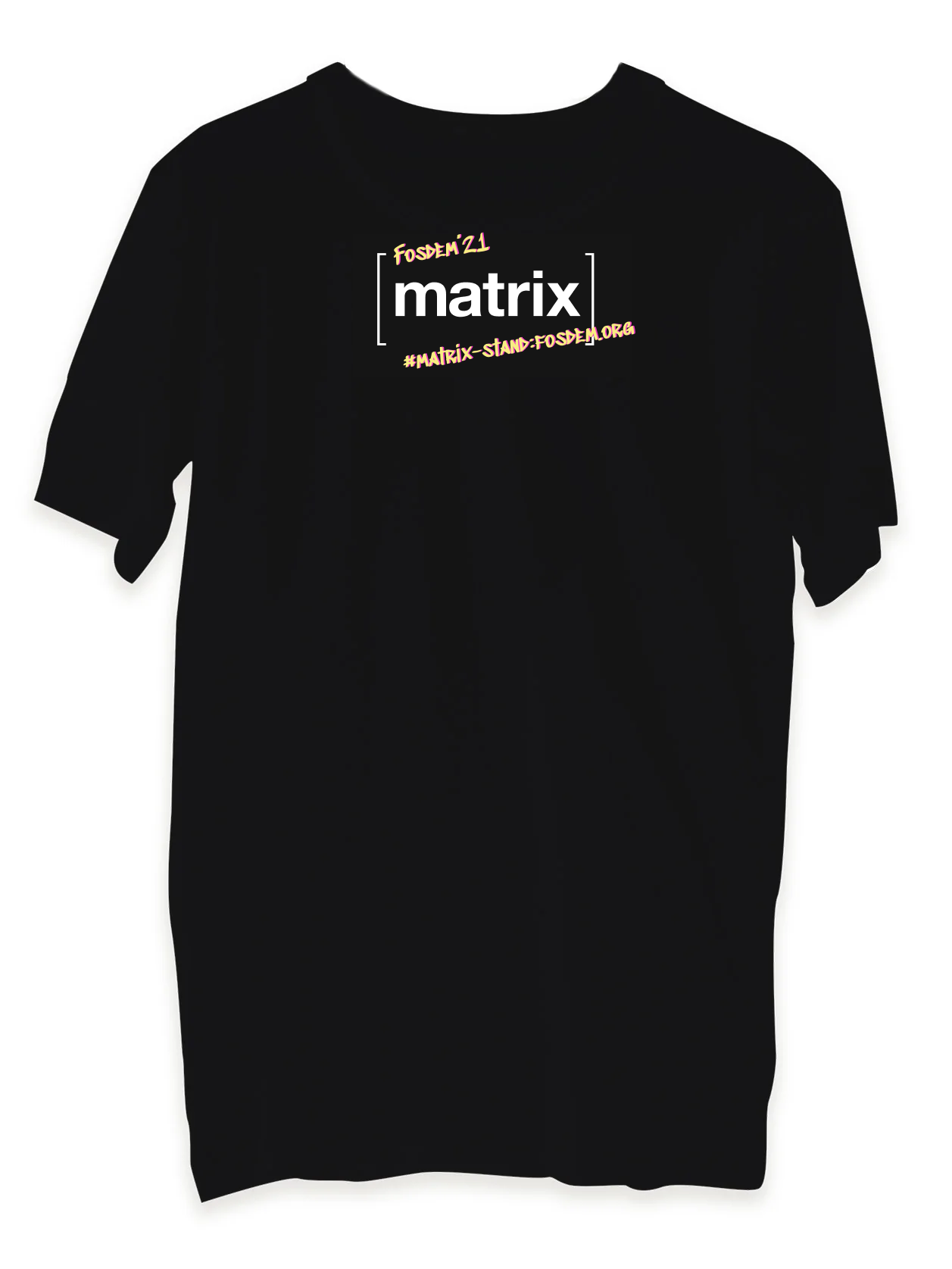 The Spec Core Team was focused on implementation and FOSDEM this week. Next week we'll be back getting through the backlog board. 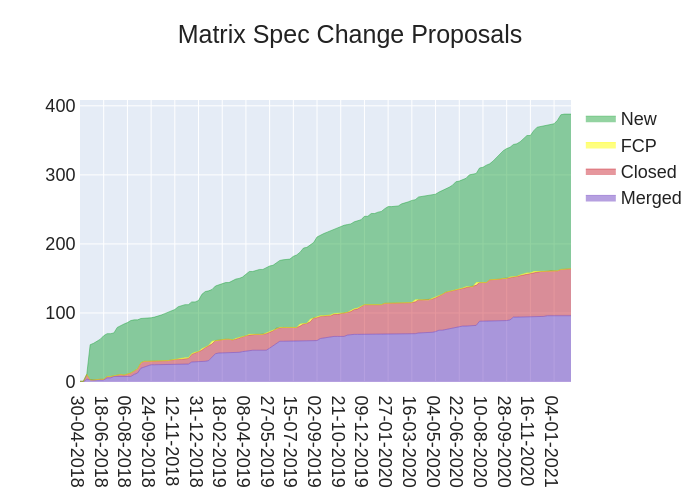 federationtester.matrix.org has been updated today so that it now works properly with servers running TLS 1.3!

We're coming closer to correct federation every day! Currently we are reviewing and improving Devin R's MR and looking for mistakes, we will be giving it a try soon.

Meanwhile I worked on:

Thanks to Famedly and everyone who supports me on Liberapay or Bitcoin!

FOSDEM is tomorrow! We're all very excited to be powering the fosdem.org homeserver, and we hope you'll join in over the weekend.

Earlier this week we released Synapse 1.27.0rc1, though the final release is currently blocked on resolving a regression in Synapse 1.26 (#9264) which could cause logins to fail if your public_baseurl was unset in your Synapse configuration. The workaround is to ensure that value is correctly set for your deployment.

We've also included the usual host of bug fixes and Admin API additions, but more on those when the actual release happens. You can preview the release notes on GitHub.

See you at FOSDEM!

My iMessage bridge is starting to be usable now. Text and files work in both directions and tapbacks and replies work iMessage->Matrix. Currently it only supports running on a Mac, the iOS option will come later. The bridge doesn't require opening ports to the Mac, it uses a simple proxy that turns the usual HTTP appservice transactions into a websocket instead.

I made the first release for mautrix-signal. No particular reason, but it's v0.1.0 now. Recent changes include:

FOSDEM is happening this weekend! Come see our FOSDEM talk in the Real Time Communications track on Saturday around how we made Gitter speak Matrix and how you can add Matrix support to your own app: https://fosdem.org/2021/schedule/event/matrix_gitter/

We're also working on MSC2716 to support backfilling the massive archive of historical messages on Gitter over on Matrix. We're prototyping the MSC on Synapse and have a suite of Complement tests to verify that the homeserver implementation is working according to the specification.

The DAG visualization (made with TARDIS) shows that we're inserting messages 1-3 between A and B: 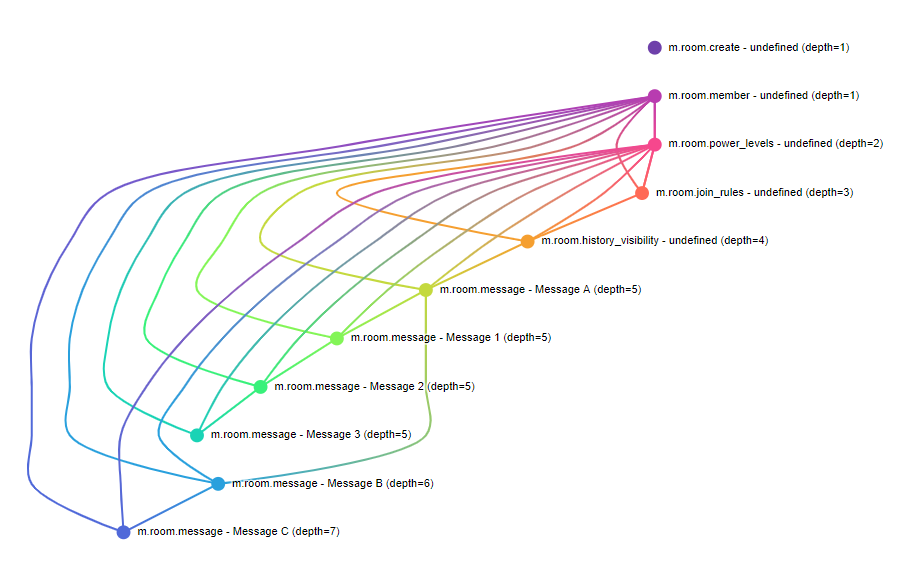 Another release! Wow. We're also testing 0.24.0-rc1 which has quite a few big ticket items this week. Off the top of the list is a new command to !plumb rooms dynamically in admin rooms, provided you have permissions in the bridge (happy days self hosters!). We've also added the feature to warn if your messages don't get through in your admin room. Finally, there are a bunch of small bug fixes and one large one that should make the bridge much more resistant to netsplits, so that it should recover in a much safer way should it get hit by a ton of traffic. Please test, and if all goes well the formal release will be out next week!

Happy friday bridge users! Today we're releasing 1.7.0-rc1 of the Slack bridge which contains some more critical encryption fixes for our experimental encrypted rooms support. We've also fixed a few serious bugs where DMs would not be persisted to the database in some cases. Please test, and let us know how you get on!

FluffyChat has been approved for the iOS AppStore! Thanks to benpa and matrix.org for the help with this! You guys are awesome!

It gets a new update on each commit, offers fast access to new features, but at the same time is less stable than the normal fdroid repository.

Check it out at: https://fluffychat.im/en/fdroid.html

It's been a little over 6 months since I've posted an update for Syphon in TWIM, but a lot has changed since then! There

have been several releases since and a lot of groundwork to get the client further out of Alpha. We've also had people start to contribute in various ways, including with PRs, and I can't thank people enough for all their hard work and support.

Big thanks to TR_SLimey whose contributions went out in this release! All that said, I'll try to give updates here more often.

Version 0.1.6 was just released this week and includes:

Since it's been a while, if anyone has any feedback, questions, or concerns, feel free to chat in the #syphon:matrix.org room, message me @ereio:matrix.org, or email me at [email protected].

If you'd like to help out with the project in any way, just ask. We'd love to have your support 😃

Nheko now has an optional privacy screen! The timeline will optionally blur when the nheko window loses focus. The timeout for when the blur effect should be applied is configurable in a number of seconds between 0 and 3600 (1 hour).

Cheers, some update probably mentioned it already, but FOSDEM is near. Make sure to check out the Matrix stand! RedSky and I (Nico) will probably be there at some random times as well as other cool people from the Matrix-verse! We even made a small promo video about Nheko!

In other news, lorendb extended the drop zone for media to the full timeline, the privacy screen got merged, some more emojis should now display properly, you can now change your avatar and displayname globally or per room and clicking a matrix link in your browser should now actually open the link in Nheko (we were missing the %u in the .desktop file).

That's all, see you at FOSDEM!

I have been learning about matrix the last few months. The result of that is frost a very basic GUI matrix client written in Go using Gio and a CS library. Highlights of the project so far are:

I started this project to understand matrix and improve my Go skills (which are not that great) and if somebody wants to play around with it and give me some feedback on it, I would very much appreciate it. Meet me in #frost-dev:intothecyber.space

Former GSoC intern and long time Fractal contributor Julian Sparber started on Monday working full time on Fractal thanks to a grant from NlNet. He is funded for the next six months and we’re looking forward to all the amazing work he will do. You can read more details on his blog.

and then, Alexandre Franke reappeared:

Apart from that grant, we’ve done a fair chunk of work since the previous piece of news two months ago. Here are the highlights:

I've updated my Sailfish client to the API changes in the latest Sailfish early access release. You will need to install the new version on Sailfish 4.0.1.45, since some private APIs got removed. No functional changes though (I hope).

NeoChat is continuing to make progress. First of all Tobias, Nicolas and Hannah have been working on packaging NeoChat for many platforms. We now have nightly builds for Android, Windows, macOS, AppImages and Flatpak. There is still work to be done to improve the quality of the builds and fixing some platform incompatibility bugs. Nicolas has also been working on optimizing the performance and the RAM usage, fixing a few bottlenecks. Tobias finally landed his big revamp of the login flow and we now support login using single sign-on. Myself (Carl) worked on E2EE support in NeoChat and Quotient. This week we finished our Qt bindings for libOlm and started adding device key tracking and more! 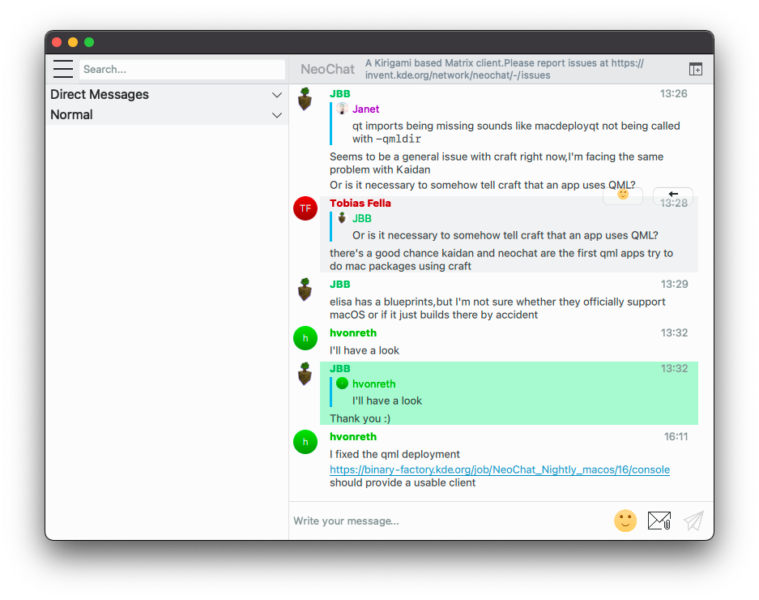 3 Hotfixes for the timetracking bot:

Hemppa the bot is a general purpose bot for writing modules as easily as possible in Python. This week Hemppa got new module that can be used for hackerspace asset management using Github issues and special labels. In practice it can figure out which machines are working or broken and also list issues per physical space. Creating issues with proper labels and other extra features to come soon. https://github.com/vranki/hemppa / #hemppa:hacklab.fi

Since there was talk about it, I went through and updated / cleaned up the MatrixFS code a bit; Got it working with tail -f (and probably other applications that poll based on mtime/size changes), added a GC that drops unaccessed data from memory after a while, and reduced the communication overhead slightly

Element Android had a fun time last weekend, getting temporarily removed from the Play Store. Google were somewhat responsive in getting it back up though, and overall Matrix received a nice boost of attention from the tech press as a result!

Gizmodo, ArsTechnica, Engadget, Next INpact, Android Police and Protocol all posted sympathetic coverage of the situation.

After a long time of no message from it I am officially ending that project.

The Code probably will stay up but it will not get revived by me. Feel free to fork it however.

Sourcecode can be found at https://github.com/daydream-mx/