This week we have Neil presenting P2P Matrix over Bluetooth. It's titled "P2P Matrix Bluetooth Low Energy demo", but I thought Neil and Matthew brought a pretty good energy to the video!

Famedly (Matrix based application for German hospitals and clinics) seems to be getting positive feedback so far: https://medtech-zwo.de/aktuelles/nachrichten/nachrichten/famedly-ueberzeugt-mit-messenger-dienst-im-krankenhaus.html

Article in German, but my favourite parts are:

Some chatter about the MSC2403 (knocking) as FCP has been proposed. Otherwise work on MSC1772 (Spaces) as that nears production and some encryption work with MSC2874 (single SSSS).

The team is carefully debilitating MSC2997, which spurred out of a conversation during FOSDEM2021. What sizes to include? What font to use? What colour do we paint this bike shed? All incredibly complex questions.

We're planning to present the new spec on a new domain; running it in parallel with the old design for a bit before eventually retiring the latter. 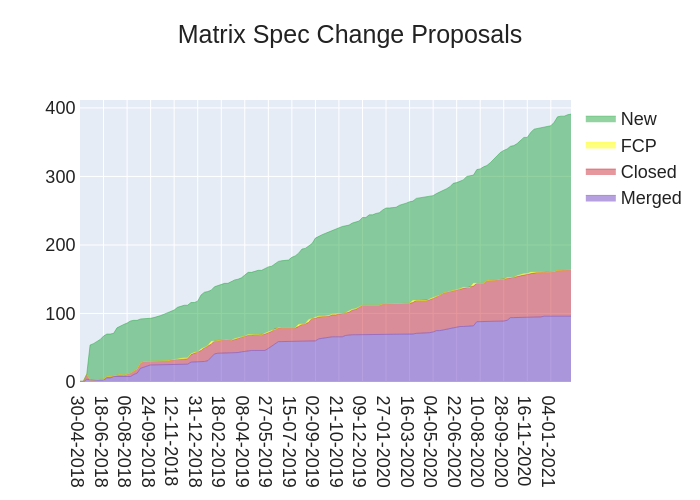 grin shared this note from Jason:

This week in Matrix Construct added Application Services support. I've been using the Mautrix Telegram bridge on a daily basis, and it's been a pleasure to develop with. Expect more bridges to be tested in the coming weeks. I'll also be working on completing the documentation for how to setup a bridge in Construct. Just to give some insight: The server has the ability to manage all of your bridges as sub-processes. In any client, just create a room for your bridge and enter its configuration there. Voila! The bridge's console appears right in that room and can even highlight you about errors!

Join us at #construct:zemos.net to learn more about bridges and lend a hand. 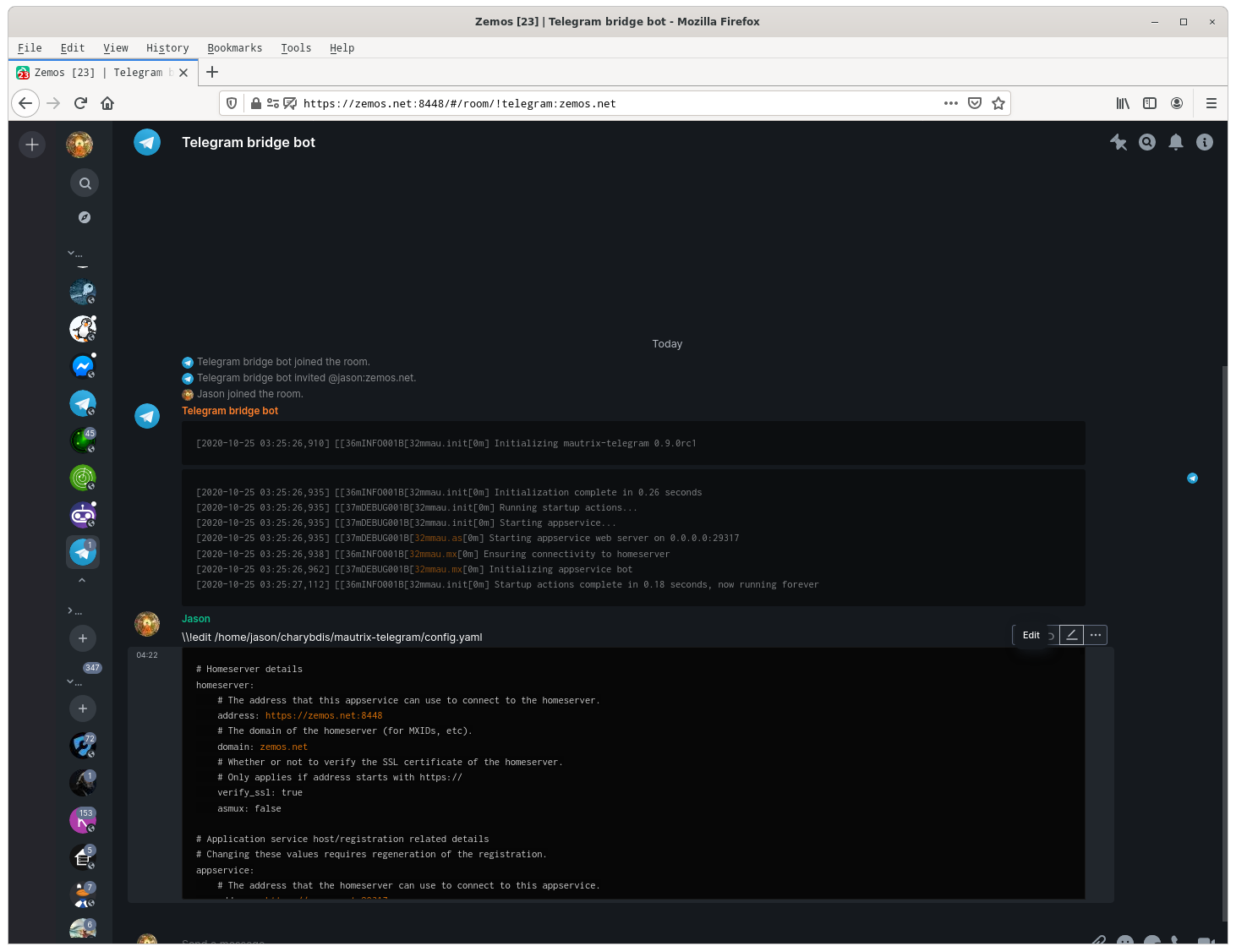 We survived FOSDEM! Last week was relatively slower in Synapse land as we paused to catch our breath, but we do have news!

First, releases. Synapse 1.27.0rc2 is out now (changelog), and we anticipate a full 1.27 release early next week. This is basically the branch that FOSDEM ran, so we think it's a good one.

Second, keeping with our biweekly development cadence, the first 1.28 release candidate is due out midweek next week, so keep your eyes peeled for that. Given FOSDEM, most of our recent focus has been on stability, bug fixes, and social login. We hope to knock your socks off with more ambitious features soon. 😉

Element Web integration had been updated to 1.7.16 (1.7.20 available in branch testing)

Thanks to @michi7801 we can now provide builds for macOS!! 🍎 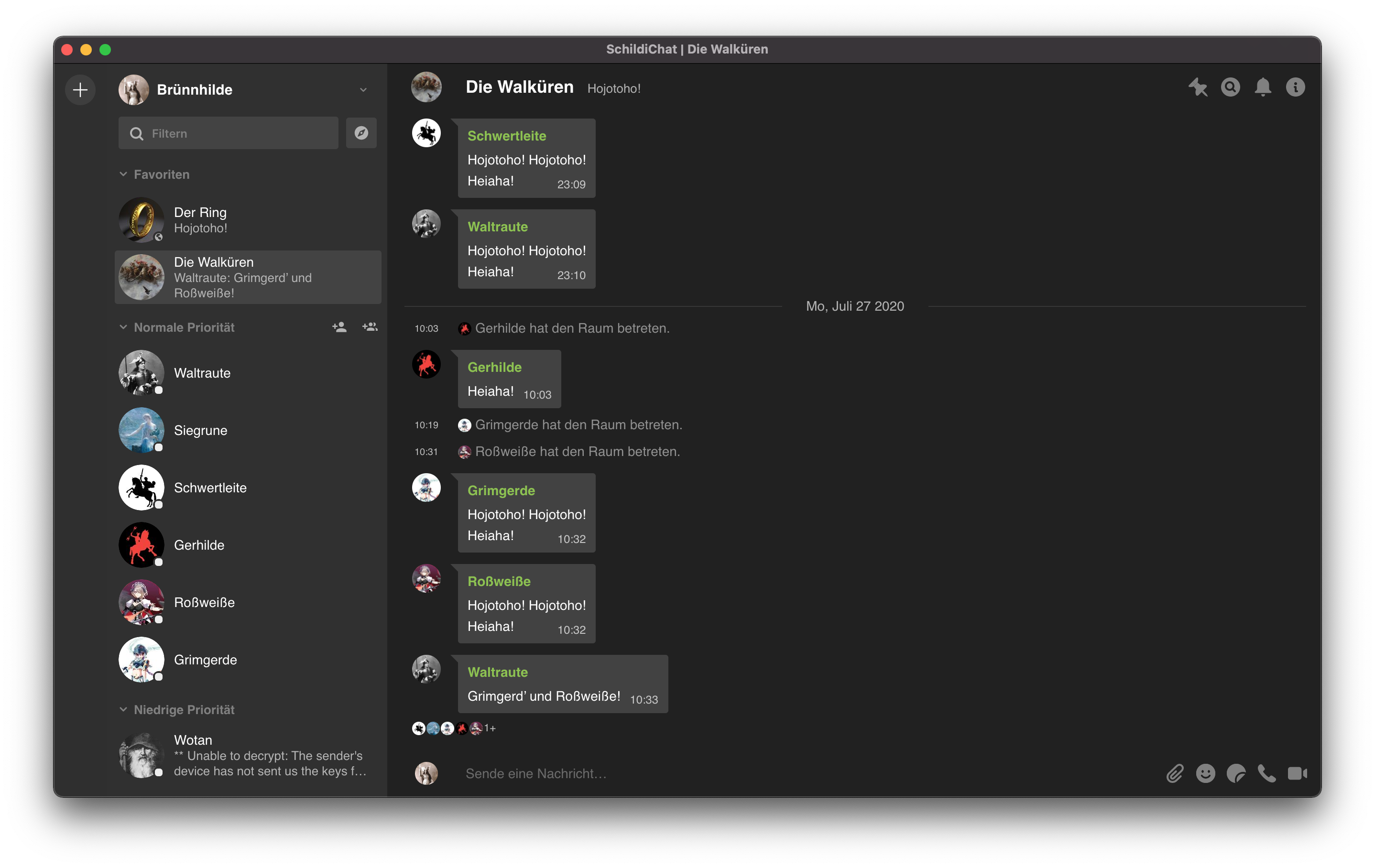 We just landed basic support for edits. Which means edits are now applied to the original message instead of showing the fallback and you can edit your messages. You can also change a text message to a video (or the other way around) or change, who you replied to, but the latter fails to render in some clients properly, so be aware of that. Edits also send a secondary relation format, which makes handling edits easier, but I still haven't written up the MSC for that... The UI is not final yet and you can't show edit history yet, but apart from that it may or may not work fine.

There were also a lot of bugfixes like broken kerning in some cases, improved focus handling when clicking buttons in the timeline, Duplex devices should now work in calls, notifications now work on Haiku and a few more.

Cos discovers the /addwidget command in Element Web

Public service announcement: Widgets are awesome. You can use /addwidget <url> in Element Web to add any web page in a iframe to the sidebar of Element Web. They get default name "Custom Widget" but you can rename them from /devtools menu. Very useful for group calendars, status pages and other info related to Matrix rooms.

Thanks to @Peetz0r, matrix-docker-ansible-deploy can now install a bunch of tools for monitoring your Matrix server: the Prometheus time-series database server, the Prometheus node-exporter host metrics exporter, and the Grafana web UI.

To install these services, follow our Enabling metrics and graphs (Prometheus, Grafana) for your Matrix server docs page.

This is a super early announcement.

As now Spaces exist and are kind of testable if you know how I went ahead to plan organizing my 200 rooms I currently have into spaces and realized soon that I will have A LOT of nested Spaces.

So I am now starting to write a tool to generate these spaces easily from a folder structure and exporting them.

You may ask why not a yaml or json format: Simply to more easily allow forking of existing collections. A folder structure is much easier to do a diff over in git than file content.

Feel free to join #space-hub:nordgedanken.dev for discussions or have an eye on https://github.com/matrix-spaces-generator where at the time of writing this only an example of the spaces folder structure exists.

We are currently starting to add some documentation to it over at https://docs.joinmatrix.rocks/users/what-is-keymaker.html

It at time of writing still very barebones but over the next few weeks the goal is to add the Code of Conduct as well as a server admin guide on how to use this.

Hi folks! I'm happy to say that after many years of fielding IRC bridge support questions, the bridge team has now written the book on it. A markdown book! Using the latest mdbook tech we've written a draft of a usage guide and a server administration guide for the bridge and would value feedback on how we can make it better. This could be typos that I have strewn about it, or suggesting new content.

The draft is hosted at:

and the PR is:

If you have a 3D printer and want to express your love for Fluffychat with a nice badge, you can download the necessary files here ^_^ https://www.thingiverse.com/thing:4550331/files

Freecad source file included for those who need some modifications. 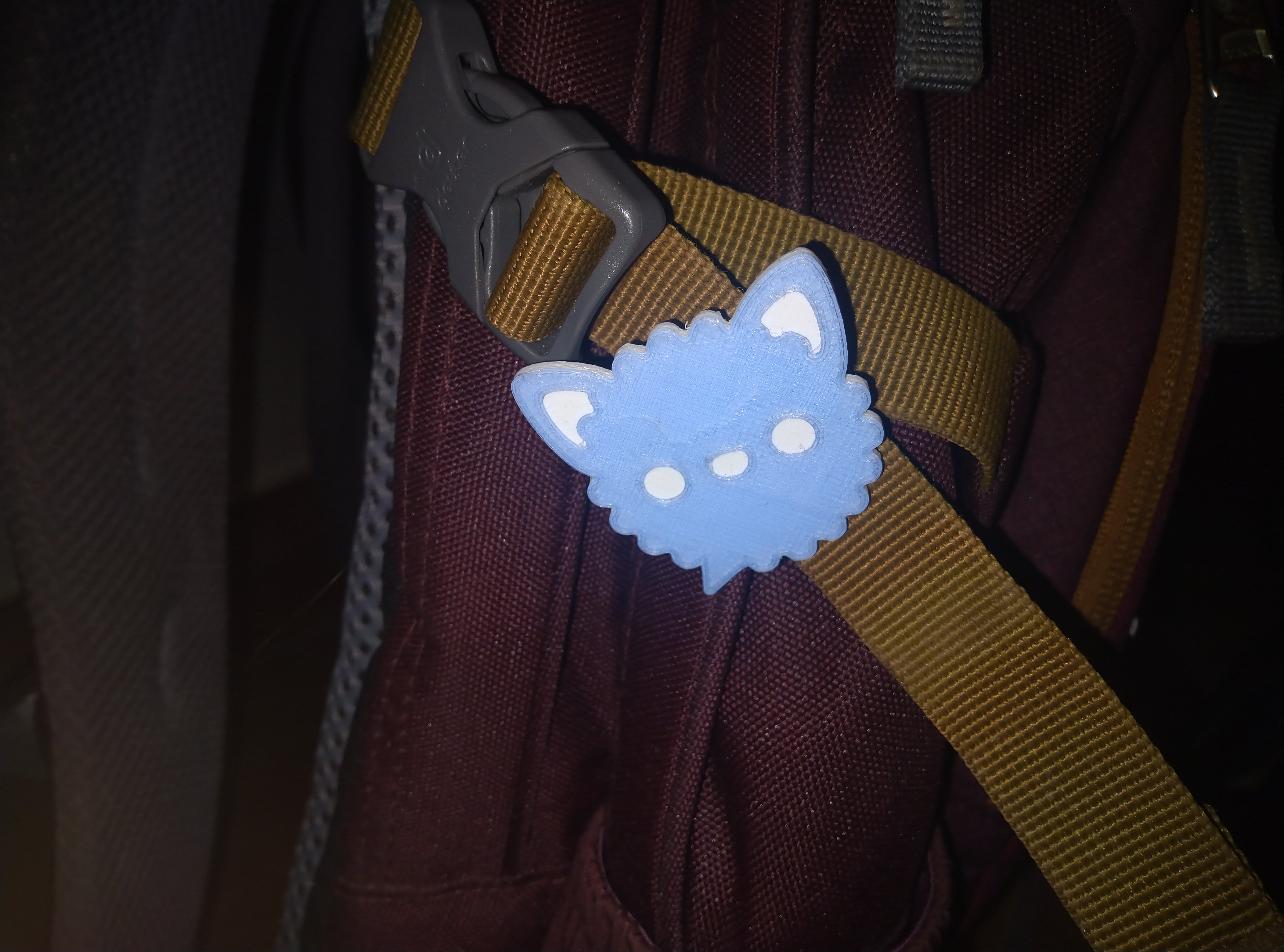